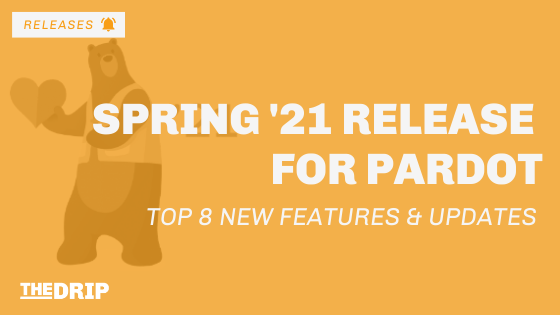 The Salesforce Spring ’21 preview release notes are here which means more features are coming to Pardot in February 2021 (check your dates here). If you thought Salesforce couldn’t squeeze in more before the year comes to an end – you were wrong!

This release puts an emphasis on reusability with cloning capabilities for campaign assets and emails, updates that bring the Lightning email builder up to parity with the legacy (classic) Pardot email builder, and more. As is practically tradition now, I will give you a run-down of what I think is important for Pardot admins and users to note.

What’s more, there’s a new home for Salesforce release notes! A slick new interface that comes with the ability to change the language, use the search functionality, and filters to zero in on what’s important. You can still access the 599 page PDF – if you really want to.

In the spirit of user productivity by replicating campaigns, the ability to clone a campaign, and all the marketing assets in one go was sorely missing. Also known as ‘deep clone’, now it’s possible to copy everything at once – or select/deselect which asset types – so you are ready to launch a repeat campaign immediately. 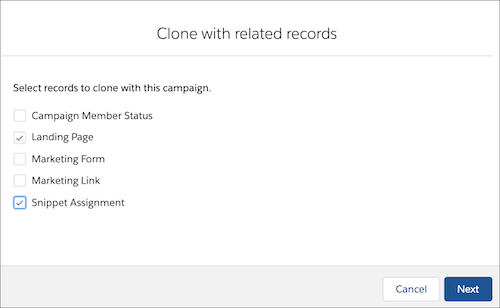 After a successful beta, first-party tracking has now been opened up for general release – so get on to updating your tracker domains!

The unsubscribe link in an email is quite dangerous, when you think about it. Once that link is clicked, the prospect is opted out.

Now prospects will need to confirm they intentionally unsubscribed. Not only will this mean prospects have to ‘jump through two hoops’ to unsubscribe (reducing accidental human clicks) but also it will prevent ‘automatic unsubscribes’, clicks on the link as bots carry out their scan for spammy links. This will mean one less type of ‘weird clicks’ that users will see on email reports.

You can also customise the message, shown below from the Pardot back-end view: 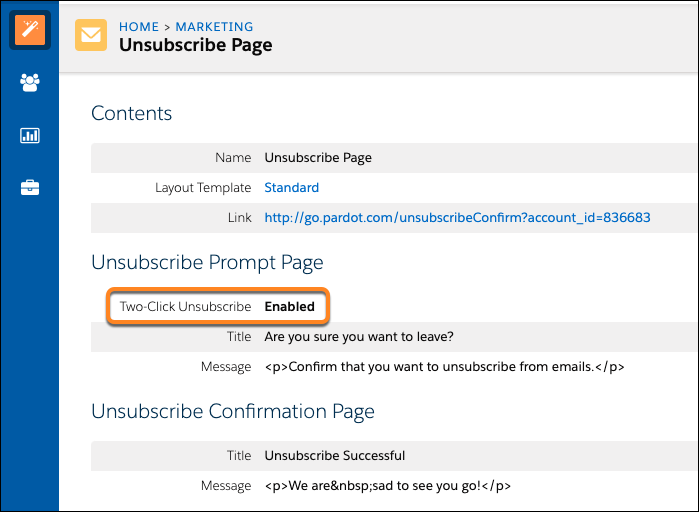 4. Specify a Link for Completion Actions in Pardot Emails

During the first months the Lightning email experience has been in general availability there was plenty of feedback – one that I heard often was completion actions based on link clicks (‘When a prospect clicks in this email — to this action’) were not tied to a specific link click in the email. Instead of being able to set the completion action to only fire when the key link was clicked (ie. your email’s CTA) it would fire for any link click.

Now it’s possible to single out a specific link from your email to only take the action on a meaningful link click (which again, brings the Lightning email experience in parity with the legacy (classic) Pardot email builder). 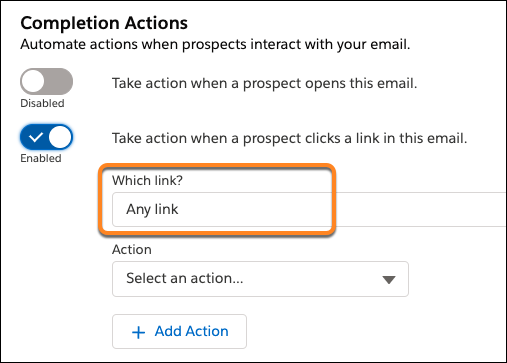 With Pardot new and existing Pardot objects syncing with actual Salesforce records (not just read-only data as it was previously), we have been able to leverage Salesforce reports and dashboard to report on the data. It’s amazing to have the feature-rich, flexible, and intuitive Lightning report builder at our fingertips to pull Pardot reports.

You can now create a custom report type for the ‘Email Content’ object to show engagement statistics by email content record (a roll-up of all list emails related to the email content). You can see a similar example I built for a Pardot landing page here.

What are Pardot product development’s top priorities? Often the first priority mentioned is enhancing account-based marketing (ABM), being able to take a view of all marketing activity at the account level, at not solely at the individual prospect level. The product is moving in this direction, as a core differentiator/value sell against competitors.

The Pardot API V5 involved a complete rebuilding of the Pardot API using modern best practices. There will be more Pardot objects available via the API (namely the newer marketing asset objects) and will use asynchronous methods, which is best for performing actions such as exporting large amounts of data (because other processes aren’t halted while the process completes, which is the case in synchronous methods).

We heard during the TTTC Live session that the recent work on the Pardot API will pave the way for AppExchange (third-party vendors) apps to fulfill these requirements from Pardot customers.

Pardot Object Sync as a dataset to use B2BMA (which is now Tableau CRM) is still in beta and is being enhanced some more. “Now your standard and custom fields are available as a single Prospect dataset, and you can choose which custom fields to bring into Tableau CRM.”

There’s a new dedicated set up area for marketers – you can see how it’s accessed below. This will give marketers easy access to some Pardot admin capability, such as the Pardot guided set up paths and other feature activation pages: 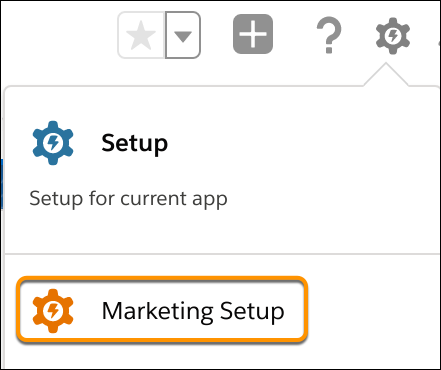 You may remember the stir that June’s Salesforce feature retirement notice caused? Salesforce announced the end of life for Pardot-only Logins on February 15, 2021. From that date onwards, all users logging into Pardot must use Salesforce’s single sign-on (SSO). If you still need Pardot-only users, you will need to transition those users to a Salesforce Identity License ASAP. Put it high on your new year to-do list – don’t leave it until the last minute!

Read more about the change in this article. 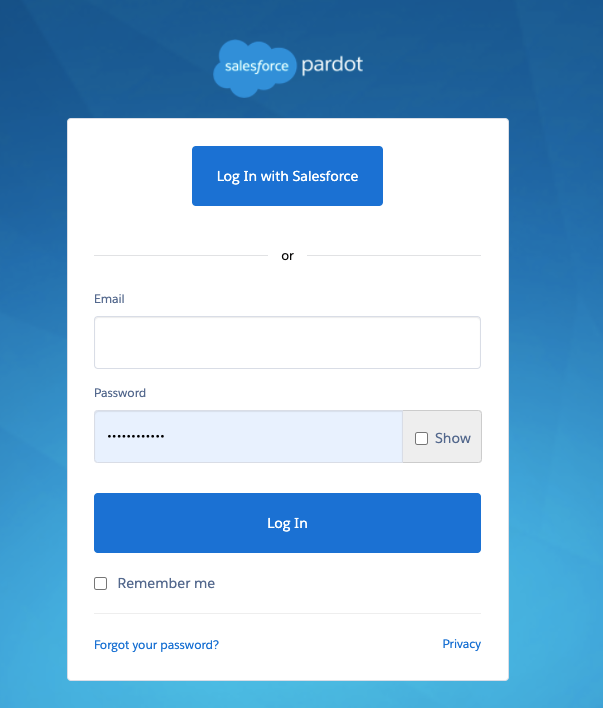 Salesforce Disclaimer:
This release is in preview. Features described here don’t become generally available until the latest general availability date that Salesforce announces for this release. Before then, and where features are noted as beta, pilot, or developer preview, we can’t guarantee general availability within any particular time frame or at all. Make your purchase decisions only on the basis of generally available products and features.