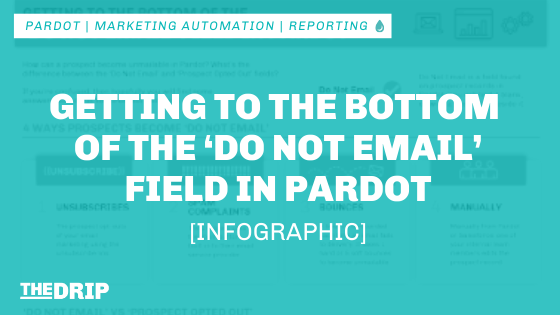 How can a prospect become unmailable in Pardot? What’s the difference between ‘Do Not Email’ and ‘Opted Out’ fields?

If you are confused and not sure how to answer these questions, then you’re not alone. Even after working with the Pardot product for years, I still need to think twice when given a specific scenario. Hopefully, you will find some answers about this key prospect field in this infographic.

‘Do Not Email’ is a field found on prospect records in Pardot. It is intended as a marketing suppression field, for admins/marketers to prevent that prospect from receiving emails.

4 Ways Prospects Become ‘Do Not Email’

The prospect will not receive marketing emails if their ‘Mailability status’ field in Pardot is set to ‘Undeliverable’ or ‘Transactional Emails Only’. These statuses appear due to one of the following reasons:

These fields should be used by different parties:

However, if either ‘Do Not Email’ or ‘Opted Out’ is true, the prospect’s mailability status will become ‘Transactional Emails Only’ (only receiving operational emails, no marketing emails):

Prospects can opt back in by using the ‘prospect resubscribe’ feature or an internal user can edit the prospect record. This will set the ‘Opted out’ field from true to false.

The “Overwrite Opted Out Field Sync” setting on the Salesforce-Pardot connector is now default for all Pardot accounts (you won’t even see it as a setting).

What is a Mailable Prospect in Pardot?

Set up Pardot Resubscribe – Let prospects opt back in