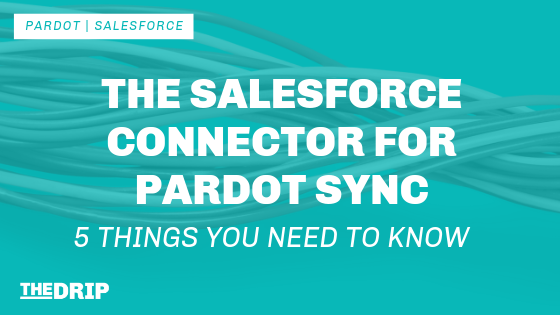 The Salesforce Connector for Pardot has many settings that Pardot users aren’t usually aware of. These additional settings can help build harmony between your Pardot account and Salesforce Sales Cloud. However, the Connector is often a tricky beast, and there are a few sync ‘gotchas’ you may be familiar with – and maybe some you haven’t come across…yet. Here are 5 key tips and hurdles I’ve encountered with the Connector Sync in my time as a Pardot consultant, working with hundreds of Pardot accounts and different connected Salesforce org setups.

1. Change the Record the Connector Creates

Did you know you can change the record the connector creates?

By default, Pardot creates Leads when syncing a new prospect to Salesforce, but this might not work for all business models and Sales processes.

You can change the connector settings to create Contacts or even Person Accounts instead of Leads. This has to be done by raising a case with Pardot Support, who will ask you a few questions about your setup to ensure everything is configured correctly. A very useful option when needed!

Which Contacts and Leads sync from Salesforce to Pardot (ending up as Prospects), all depends on what visibility the Connector user has in your Salesforce org. Typically, your Connector user will have ‘View All’ permissions in Salesforce.

But, what if you want to restrict which prospects are synced to Pardot?

There are reasons why organisations do this: perhaps you have a serious security model and don’t want your marketing team to be able to access all of your data, or perhaps you have hundreds of thousands of Contacts in Salesforce you’ll never need to market to, and you don’t want to pay extra storage costs for Pardot in addition to Salesforce.

How do you do this? Salesforce security settings!

Set your org-wide-default security settings in Salesforce to private, and then open up access to other users using sharing rules (a common example is by using record types). Only allowing your Pardot Connector User access to the records you want to sync means that these are the ones created in Pardot when a new record is created in Salesforce.

3. Field API names must be the same across objects.

This one is not well documented but will trap you quickly! When syncing fields from Pardot to Salesforce, Pardot looks for the API name of the Salesforce field e.g. Opt_In__c. The field ‘Opt In’ could appear the same on the page layout, but the API names could be different below the surface, eg:

Pardot will sync this field to the lead, but when the Lead is converted to a Contact, the mapping won’t be carried across, and so the Prospect will be unable to sync to the new Contact.

Read more about API names and how to Fix this sync nightmare in this post!

In short, make sure all fields have the same API names across Leads, Contacts and Person Accounts – this goes for picklist/dropdown values too!

If you’re looking for an overview of what sync errors are and how to resolve them, I recommend taking a read to brace yourself.

I won’t go into too much detail here, but there are rules I want you to follow:

Rule 1: You should be checking your sync errors every day!
Rule 2: Keep your data clean
Rule 3: You can ignore a lot of issues by allowing the Pardot Connector User to bypass validation rules.

Sorry, what? A magic solution?

If it’s alleviating hundreds or thousands of Connector sync errors, then maybe we can call it magic! To do this, create a checkbox on the user object called ‘Bypass Validation Rules’, and then check the checkbox on the Pardot Connector User. Add this to the bottom of your validation rules that Pardot is bumping up against (with the correct API name, of course!):

This means any changes your Pardot Connector User makes to Salesforce records won’t be included when the validation rule fires, preventing issues from dirty data in the sync queue.

5. Beware of the ‘Overwrite Prospect Opt Out’ field!

Have you noticed a new setting on the connector labeled ‘Overwrite Prospect Opted Out field’? This was introduced this year to help marketers overcome the frustrations of opting a prospect back in when the sync always overrides an unchecked checkbox with checked (yes, a mind bender). Opted Out would always turn back to True when the Connector sync happened.

Read about the null value sync in detail in this post.

In response, Pardot released the ‘Overwrite Prospect Opt Out’ setting, which stops this behaviour, and just takes the most recent value. Yay! Except, what is actually meant as the recent value is somewhat unexpected…

..When performing an import of prospects, you can’t select the ‘Opted Out’ field to sync to, however, Pardot doesn’t recognise this, and, with this setting enabled, will see the Opted Out field as being updated to false. This then syncs between both systems – therefore opting prospects back in. A GDPR nightmare.

So how can you get around it? You have two options:

Option 1: Don’t enable the setting, or at least make sure it’s off for imports!

Option 2: If it’s important to you that the setting remains enabled, when performing *any* import (new or existing), ensure that you separate your prospects into two lists – Opted In and Opted Out. Import your Opted In prospects as normal, but import your Opted Out prospects using the ‘global opt-out’ setting found on the list selection step.

Personally I’d love to have the ‘Opted Out’ field available to sync to on import – if you think this would be helpful, please upvote the Idea here.

The Pardot/Salesforce sync is easy to set up, but a few underground settings could be causing you issues without your knowledge. Keep an eye on your sync errors, check your data, and *especially* take a look at important fields such as the Opt-Out field – is it syncing as you would expect it to?

When used properly, the Salesforce connector is a powerful tool, and can open up your automation capabilities beyond Pardot by making the most of Salesforce features. Get to know the sync and it will reward you!

There were a few other resources mentioned in this post, which will give more context to my tips and hurdles