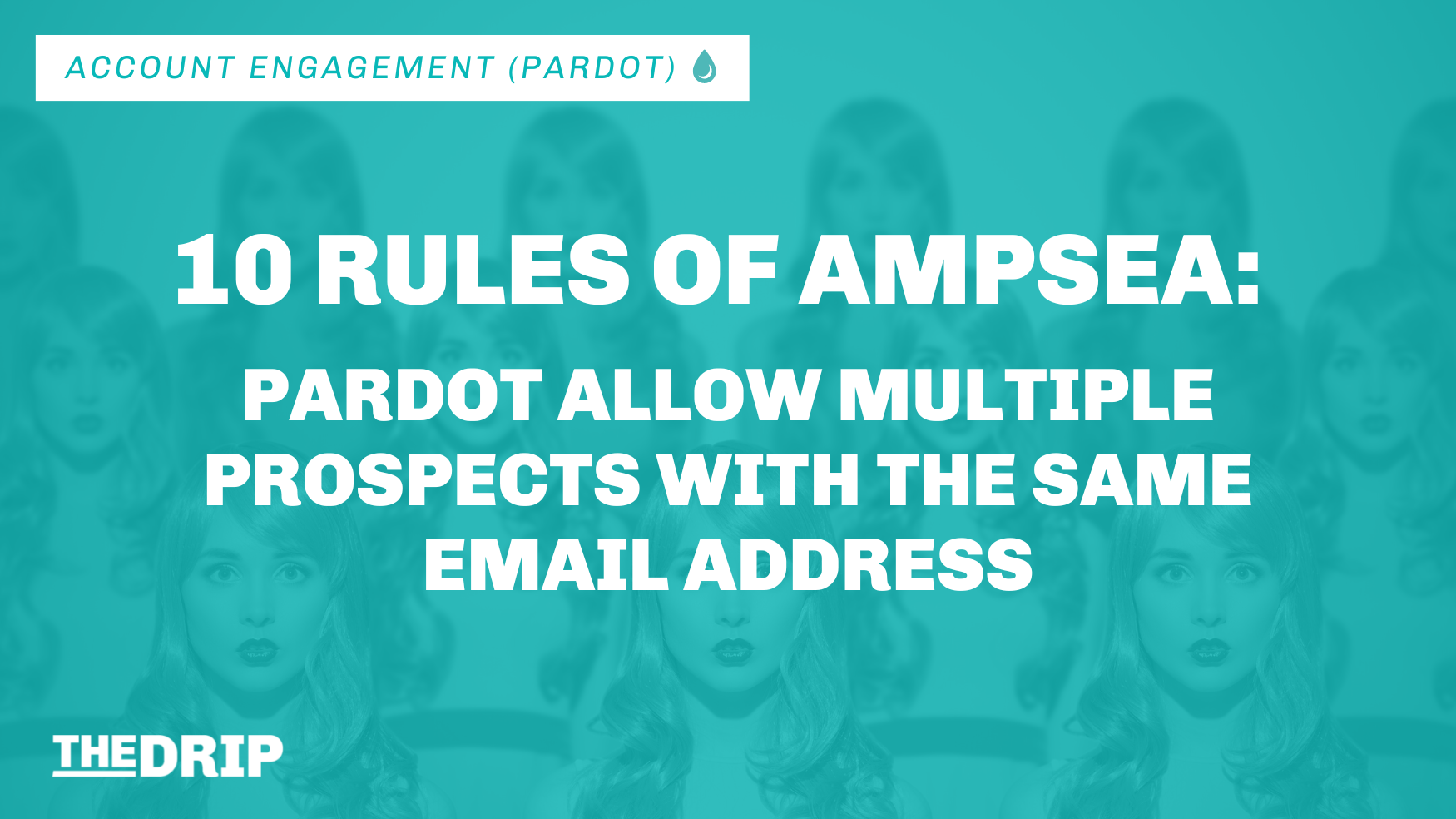 What this means is that each Lead/Contact/Person Account in Salesforce is eligible for its own prospect record because each Salesforce record has its own CRM ID. If you have two Lead records with the same email address, still, their CRM IDs are different.

Since AMPSEA was rolled out, then made default for new Account Engagement (Pardot) accounts, it has pleased some admins but frustrated others. Personally, I am pro-AMPSEA, as I see the benefits and have worked with organizations that needed this model. There are both pros and cons to AMPSEA, and on the flip side, pros and cons to no AMPSEA – we’ll aim to get to the bottom of these in this guide.

First, let’s walk through 10 ‘rules’ of AMPSEA – its behavior in a ‘what happens when’ manner. By the end, you should be clued up on how AMPSEA will affect your marketing automation when put into action.

Think of CRM ID as a code that each Lead/Contact/Person Account in Salesforce (and prospects in Pardot) use. Even if field data is updated on their record, the ID will stay the same, therefore, they can always be identified by the system during data import, and more.

As prospects in Account Engagement are associated with Lead/Contact/Person Account records, that Salesforce record ID becomes the prospect’s ID, too.

What happens when two Lead records with the same email address sync to Pardot?

Using the diagram above, the answer is that two prospect records will be created, one with Lead A’s CRM ID, and the other taking Lead B’s CRM ID.

In other words, each Lead/Contact/Person Account can exist in Pardot as a prospect regardless of whether two Salesforce records have the same email address.

We can flip that on its head to how other marketing automation platforms function. The unique identifier is typically an email address; each email address has one record in the system, and any marketing activities made by the owner of the email address are assumed to belong to that single record in the system. The system effectively deduplicates on your behalf, regardless of whether there was a legitimate reason for two records – and you have no control over which of the records in your Salesforce database are synced with the marketing automation database.

There’s the concept of deliberate duplicates, if there is a business case for having two records for the same individual.

Contact record access could be highly segregated in your Salesforce org, for example, if sales users can only access Contacts for their region/business unit. This is often the case in company mergers and acquisitions, where two previously separate companies will still operate independently.

Another use case could be unconventional lead lifecycles, for example, where each time a prospective customer interacts with your organization, they have to be requalified by the sales team. As Pardot prospects can be either Leads/Contacts/Person Accounts, Pardot doesn’t distinguish between what record the prospect is on the Salesforce side.

Check if AMPSEA is Enabled

Allow Multiple Prospects With Same Email Address (AMPSEA) was enabled by default if you purchased Account Engagement (Pardot) after June 2016. If you have an older account, haven’t ever enabled AMPSEA, you are in a small minority.

Check if AMPSEA is enabled by navigating to: Pardot Settings → Account Settings → scroll down to find Allow Multiple Prospects with the Same Email Address. It’s likely you will see Permanently Enabled.

How Do I Disable Allow Multiple Prospects With Same Email Address? Answer: Truth is, you can’t. Once enabled, the change is irreversible. In the background, Pardot has done a huge amount of processing to reforge the Salesforce-Pardot record associations, and so switching back is impossible.

Check if an Email Address is Unique

“Email Uniqueness” is a field that states whether this is the only prospect record using that email address.

Note: Unique identifier is the core AMPSEA principle, and is the easiest to grasp. CRM ID is a clear instruction when data syncs between Salesforce and Pardot. The remainder of the AMPSEA rules will dig into scenarios where you won’t have the benefit of a known CRM ID, and have to fall back on email address instead. Let’s look at the ‘what happens when’ for the following scenarios.

When using prospect import, you have two options for how you would like to match records in your import file with records in Pardot:

Golden rule: Use CRM ID whenever you have it. Using CRM ID removes any ambiguity over which prospect record you are looking to update – like hitting the bullseye.

However, there are times where you don’t have the benefit of CRM ID:

This means you will need to use the email address to match by.

Let’s take the example where you have received a list from a trade show. This list could contain new prospects, existing prospects, and customers – you can’t be sure (unless you want to do a VLOOKUP on the whole of your CRM database).

When the import starts, Pardot begins matching the rows of data in the import file to the prospect records in Pardot.

What happens when Pardot comes across an email address in the import file that two prospect records use? Which does it choose? Answer: The prospect record with the most recent activity.

Note: When exporting prospect data to CSV, there’s something quirky to watch out for. Pardot will produce a file with Lead and Contact IDs in two separate columns. You will need to combine these two columns into one before you can reimport.

When it comes to Pardot forms, it all depends on whether the prospect has been cookied already. If a cookie association exists between the individual’s browser and their prospect record, that association will win. The activity is related to that prospect record – simple.

Note: Activity tracking ceases as soon as a prospect is sent to the recycle bin.

Now let’s turn our attention to list emails, which is a concern for marketers knowing that more than one record, per individual, could exist in their Pardot database.

What happens when there are two prospects with the same email address on an email send list? Answer: Pardot sends one email to the prospect with the most recent activity. The email send activity will only be recorded on that prospect record.

In other words, Pardot deduplicates the send list before the email is sent, using most recent activity as the criteria for selecting the primary record.

READ MORE: How to Send an Email in Pardot: A Recipe

Note: If the same prospect Record is on both the send list and the suppression list, the prospect will not receive the email.

Rule exception alert! Recency and frequency are controls you can put in place to start alleviating marketing fatigue with Account Engagement (Pardot). You can create dynamic lists to use as suppression lists if they have been emailed too many times (frequency) in a given time frame (recency).

Pardot stays on the safer side when it comes to email preferences. Opt-out behavior aims to respect the strictest preference.

What happens when a prospect opts out (unsubscribes)?

Prospects can use the unsubscribe link embedded in emails or from the email preference center.

If a prospect opts out (or a user changes the opted out field from the prospect record), all prospects with the same email address will also be opted out, and therefore will have the mailability status ‘Transactional Emails Only’.

When a Pardot user updates the mailability fields manually, a warning will appear if there is more than one prospect that shares the same email address:

What happens when a prospect unsubscribes from a single list (public list opt-out)? Answer: All prospects with the same email address are opted out of the public list.

READ MORE: What is a Mailable Prospect in Pardot? Do Not Email vs. Email Opt-Out

What happens when a prospect hard bounces (or causes five soft bounces)? Answer: All prospects with the same email address are marked as “Undeliverable”.

Connectors are ‘plug-in-and-play’ integrations between Pardot and third-party tools, such as Eventbrite and Google Ads.

When it comes to matching prospect activity on the third-party platform with prospect records in Pardot, connectors have to work with the email address as the unique identifier. In this way, they are similar to how form submissions work, except they don’t have the additional benefit of the Pardot cookie to direct the data update to a specific prospect.

Since AMPSEA was rolled out, then made default for new Account Engagement (Pardot) accounts, it has received split reception from admins. There are both pros and cons to AMPSEA, and on the flip side, pros and cons to no AMPSEA. Here is a comparison of AMPSEA benefits vs drawbacks:

What this means is that each Lead/Contact/Person Account in Salesforce is eligible for its own prospect record because each Salesforce record has its own CRM ID. If you have two Lead records with the same email address, still, their CRM IDs are different.

This guide has walked through 10 ‘rules’ of AMPSEA – its behavior in a ‘what happens when’ manner. Now, you should be clued up on how AMPSEA will affect your marketing automation when put into action – here’s a summary table to refresh your memory: