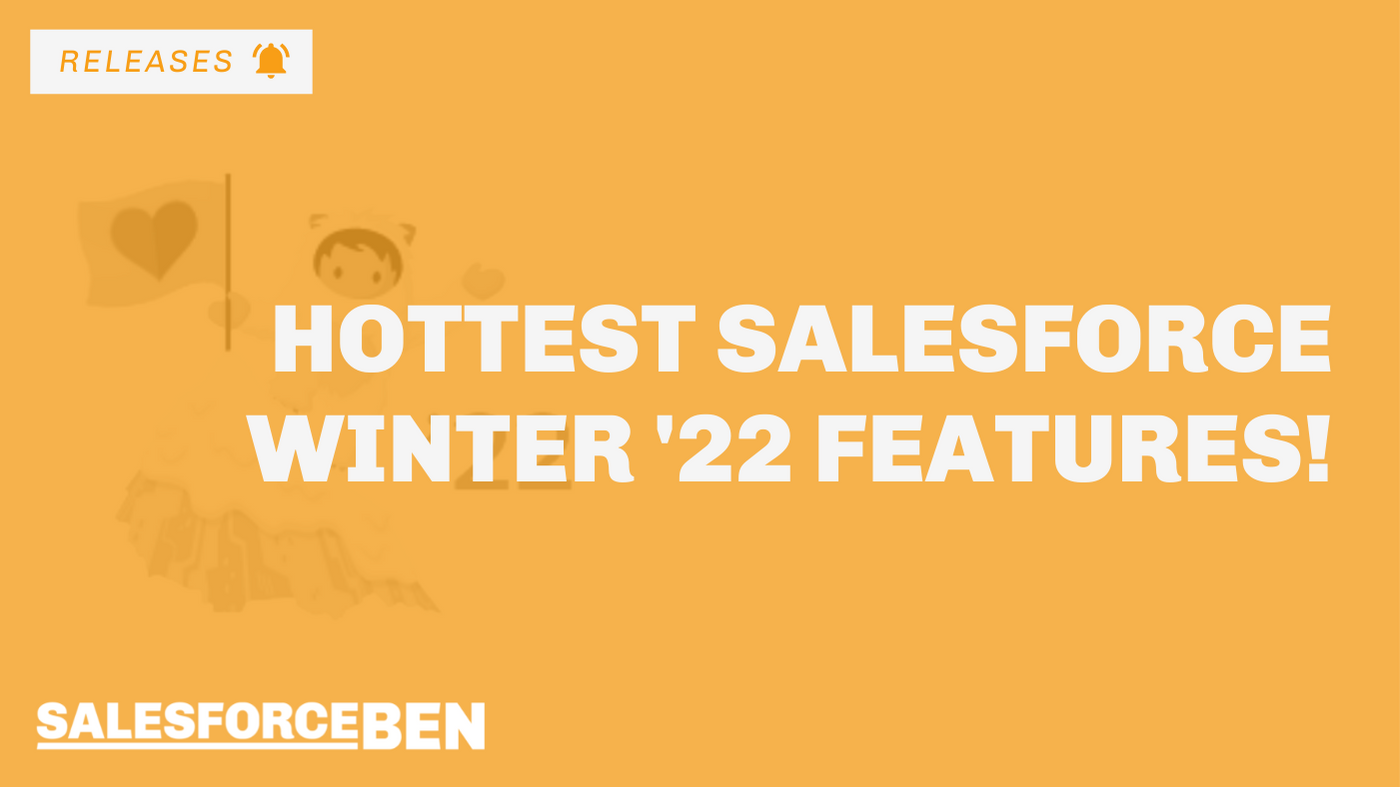 It’s that time of the year again, another release is nearly upon us, which means a whole bunch of new features and functionality to play around with. Salesforce releases bring excitement both to Admins & Developers in the backend, as well as users who get UI improvements on the frontend.

Having just announced the release date, sandbox preview, and pre-release org information for Salesforce Winter ’22, the release notes are also now available! So in true Salesforce Ben fashion, let’s dive into our top features of this release…

The amount of updates Flow is a real game-changer, and the Winter ’22 release is no different. Tim Combridge has already highlighted some of the most important updates in his post “8 New Salesforce Flow Features to Shout About“. Some of the features include….

This is a major addition that will solidify Flow’s reputation as the go-to Salesforce automation for all admins – deserving of its own spotlight. Could this be the final nail in Workflow Rule’s coffin?

Einstein Search is one of the many free AI-driven features provided to us by Salesforce. Whilst this feature has been available for a while, there are updates in almost every release. Most importantly, Einstein Search will now be enabled by default in the Winter ’22 release.

Over the past year, Salesforce has put a big emphasis on allowing Admins to improve the speed of their Org. The Analyze button on Lightning Pages lets Admins to see the predicted load time of pages, and provide recommendations on how to improve it.

In the Winter ’22 release, there are a few additional features that are important to note:

Dynamic Gauge Charts have been a long time coming for Salesforce Admins and users. Previously, Gauge charts have only allowed you to track KPI’s against static numerical goals, but now, this figure can respond dynamically to your business.

For example, in the screenshot below, you can see a gauge chart filtered to only show the revenue of the Singapore subsidiary, relative to the target of the whole business.

For those that are familiar with Collaborative forecasting, you will know that there are four types of forecast categories, Pipeline, Best Case, Commit & Closed.

Salesforce is now adding a 5th category called “Most Likely”, which allows you to further split out sales users opportunity groups.

Although not the sexiest of features, Salesforce has given the billing section of your org a revamp. This is where you can see your Salesforce invoices, products, and contracts.

If you are familiar with “Checkout” in Salesforce classic via the setup screen, this will now be renamed to “Manage Subscriptions”. If you are working out of Lightning, you can access your account via the setup cog, and clicking on “Your Account”.

Dynamic Interactions were announced a few months ago, and we’re very happy to see them included in the Winter ’22 release.

Dynamic Interactions allow developers to create Lightning Components that dynamically react to user activity on another component. For example, you can see from the screenshot below that when a user clicks on an account, the Dynamic Interactions component will show the exact location on a map.

This means you can link different flows, and approval processes together, defining whether steps need to be completed sequentially, or together.

A small but important feature. Inline editing in reports was brought out in Summer ’21 to helps users easily edit data straight out of a report. This feature now also allows you to edit date, picklist, and lookup fields.

The “Activity” component is a vital part of how users get a quick overview of previous communication and upcoming tasks/events. Salesforce has now provided us with a sorting option, as previously the item with the closest due date was at the bottom of the list. A great feature to tell your users about…

Previously in beta, the new “Mobile Home” feature is now generally available for both Android and iOS users. This provides Salesforce Mobile users with a new home page with the ability to customize the “cards” that are displayed.

Restriction Rules completely buck the trend on this, allowing you to create rules that control which subset of records you allow specified groups of users to see. This feature is now generally available.

In addition, Scoping Rules have also been announced in beta. This feature allows you to remove unnecessary records when users are searching. This doesn’t remove access from the records themselves but helps when searching.

The Email Template Builder has received some major updates over the past few releases, allowing Admins, or users, to create great-looking emails to send to clients.

In the Winter ’22 release, Salesforce has announced multiple updates to the Email Template Builder. Including…

List emails are a great way for your sales reps to send their own email marketing campaigns directly out of Salesforce. Previously, these emails had to be sent using Salesforce. This led to some issues such as formatting, and the email looks like it came from a system, not a user.

Salesforce is now running a pilot that will allow users to send via their own email provider, as opposed to Salesforce.

I hope you enjoyed this summary of our favorite Salesforce Winter ’22 features. Did we miss any out? What are you most looking forward to?

Let us know in the comments below…