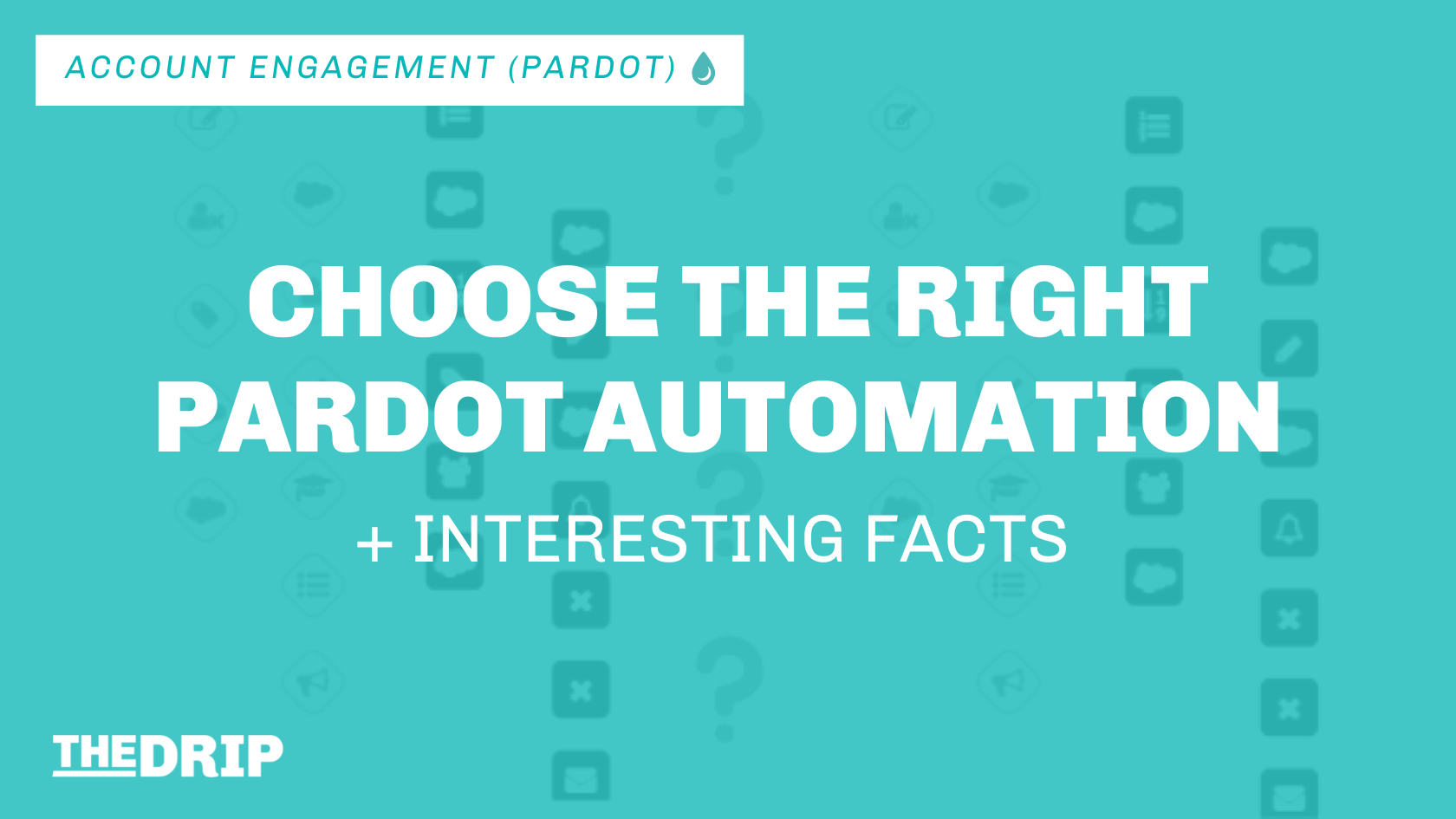 Pardot automation is core to linking together Pardot (Account Engagement)’s features. Think of automation in Pardot as the glue that makes a set of actions happen when prospects engage with your marketing assets.

Automation could be triggered by criteria based on data, prospect activity, or a time-based trigger. This flexibility means that organizations use Pardot to automate key marketing workflows.

Knowing what each type of Pardot automation does is a good start – If you’ve studied for the Pardot Specialist certification, you will already be familiar. What’s more important is knowing which Pardot automation to use and when (in a specific scenario).

There are four main types of Pardot automation, with a couple more additions:

Automation rules are the most broad automation. They can be run, paused, and resumed – you have control. Automation rules have the broadest set of actions. Using the criteria you have set on the rule, Pardot scans the whole prospect database for prospects that match the criteria, and then apply the action/s you have chosen.

Completion actions fire each time a prospect makes an activity on a marketing asset. You add completion actions to each individual email, form, landing page, page action, or custom redirect – which yes, gives you flexibility – however, once you add a completion action, the action will fire blindly.

Pardot Dynamic Lists are based on criteria that you define on the list’s settings. Prospects are added/removed automatically whenever they match/unmatch your set criteria.

For example, a list with criteria: Industry – is – Manufacturing, prospects that have “Manufacturing” in the industry field on their record will automatically be pulled into the Dynamic List. If the value changes to, e.g. “Retail”, they will be automatically removed from the list.

Pardot segmentation rules are designed to pull a one-time list of prospects, then apply the set action/s, such as adding them to a list, or to a Salesforce Campaign with a specific member status.

Dare I say, segmentation rules are the least useful of the four Pardot automations, being the most limited in functionality (once run, you have to copy them to run again). However, they are useful for:

Take actions on prospects outside of Account Engagement. For example, from Engagement Studio, you can register prospects for a webinar or events, send an SMS or survey, and other third-party platforms.

External actions also open the door to many Salesforce use cases, to hook Engagement Studio into various objects or automations on the Salesforce side (e.g. LogCase). Very cool!

Which Pardot Automation Should You Use?

One flowchart guides Pardot specialists to answer the burning question “which automation should I use for this in Pardot?”

Let’s dig out the flowchart, and share four questions to ask yourself.

1. What will trigger the automation to fire?

We know that something needs to happen to trigger an automation to fire, as a result. This ‘something’ that needs to happen, falls into two categories:

Marketing assets are pieced together to make up a campaign/marketing tactic, including:

Your marketing assets exist for prospects to interact with, for example: opening an email, clicking on a landing page, submitting a form, downloading a file, etc.

Your marketing assets exist for prospects to interact with. For example: Clicking a link in an email, viewing a landing page, submitting a form, downloading a file, etc.

Completion actions don’t take any further criteria into consideration. Conditional completion actions, on the other hand, give you more flexibility for which prospects to apply what action to.

READ MORE: How to Use Conditional Completion Actions with Pardot (Account Engagement)

If you would like automation to fire based on criteria, you have other options…

2. Do you need the automation to run more than once?

Now we move on to tackling automation that fires based on prospect attributes – either data based e.g. a prospect’s country, or activity based, e.g. submitted a form.

​​“I want the automation to fire based on criteria” means that prospects who match your desired criteria will be processed – you could think of it as who you’d want to keep in your fishing net.

Golden rule: If you need an automation to run only once = use segmentation rules.

3. Does the automation need to run in the background? Does it need to repeat?

You’ve got to this point because you want the automation to run without your intervention and have the ability to repeat (i.e. not one-time only).

Golden rule: Automation rules are the most broad automation with the most actions available. They can be run, paused, resumed, and repeated – you have control.

Using the criteria you have set on the rule (if any), automation rules scan the whole prospect database for prospects that match the criteria, and then apply the action/s you have chosen.

Organizations will use automation rules for ‘operational’ processes, such as routing prospect assignments to users.

Note: Automation Rules are useful but have tight limits – a primary target for audits. Multiple individual rules will soak up a lot of processing.

4. Do you need to create a list that updates automatically?

Pardot dynamic lists are based on criteria that you define on the list’s settings. Prospects are added/removed automatically whenever they match/unmatch your set criteria.

Refreshed constantly, dynamic lists will always be up to date when required – highly responsive and relevant prospect segmentation.

8 Facts About Automation in Pardot

Now you know which Pardot automation to use when, let’s dig further.

Not only are there likely multiple ways to automate a marketing process, you’ll also encounter system “quirks” to be aware of as you design your Pardot automation. You won’t want to end up bumping up against limitations in the flow of building!

These are some facts I’ve collected over the years while using Pardot.

Which assets can you set up this type of action on? Usually, people roll-off three – however, there are others:

Don’t forget to explore these options so that you can connect the ‘dots’ between your assets and data.

2. Fire completion actions on assets not hosted in Pardot (Proceed with caution)

The answer to question 1, “I want the automation to fire based on a prospect interaction” → is to use completion actions.

We learned that completion actions fire when a prospect interacts with a Pardot marketing asset – e.g. emails, landing pages etc. created in Pardot.

What if your marketing asset isn’t hosted by Pardot? Popular examples include:

Proceed with caution: Due to the changes in how cookies function with Pardot, for completion actions to fire, a prospect must already have been identified (cookied with your Pardot tracking code) on the particular browser they are using.

Automation rules sit in a paused state when you save them. This is to give you the opportunity to run a preview. Running the automation rule “preview matches” is highly recommended to see how many prospects will be processed by the rule. Once you click “Resume” it’s tricky (if not impossible) to revert back to the previous state.

4. Prioritized actions (not all actions are equal!)

You can set multiple actions on any completion actions or automation rules, for example, assign to a user, notify the user, apply a tag, etc.

It’s important to note that actions won’t fire in the order you place them in.

Some actions that will be prioritized above the rest. The general rule to identify prioritized actions is to ask: “Will this action affect other automations?”

In the example above, the order would be prioritized as follows:

Assign to user comes first because it’s likely to have other consequences, i.e. automation that happens once a user is assigned, including the connector sync to Salesforce. Apply tag is unlikely to have subsequent automation tied to it, and notify user is simply a notification going to the user.

Keep this in mind if you are relying on one action to make another work, for example, a custom field value change that’s used as a merge field in an autoresponder email.

Throttling in marketing automation exists to limit the automated actions a system can make within a set period of time. It’s commonly used for controlling email volume (the number of emails the system is allowed to send at during a period of time), to prevent servers from overloading, and limiting resulting traffic to your website.

Although it sounds aggressive, Pardot throttling is useful for completion actions (on emails, forms, etc). However, not many marketers are aware of throttling and how it impacts their Pardot automation.

Following Apple’s Mail Privacy Protection (MPP) announcement Pardot product team thought ahead. You can find where email opens are being used across your Pardot account with the Email Open Rule Audit Tool, a page showing which automation rules rely on email open data.

When it comes to Pardot and Slack, there are many reasons why you would notify a channel when a prospect interacts with a Pardot marketing asset. There a “Usage” tab on the connector’s settings, so you can see:

7. See how automation has affected prospects

If you look at a prospect’s Engagement History (prospect activities) on their record, you will not be able to see how some automation has made changes to their record.

A prospect’s score is increased when an automation rule runs. The score change won’t appear in the activity history.

Why? Because the score change was applied by the system (automation rule), not an interaction the prospect made (a prospect activity).

To view the full picture of automation at the prospect-level, look at the “Audits” tab on the prospect record for the full trail.

Pardot automation is simple to set up but there are some limitations. Salesforce Flow, on the other hand, is more powerful, and can be used to support Pardot automation. With Pardot’s focus on extensibility, Flow will play an even larger role for Pardot.

Take external actions. To set up an external action, you will need to work with a developer to create an invocable action. Invocable Actions allow developers to package useful code functionality into declarative building blocks that can be used in other Salesforce tools, including Flow, and Engagement Studio, among others.

There’s a big focus on automation in Pardot, as it’s key to extending your usage of the tool.

So, keep this flowchart in your ‘back pocket’ for next time you need to ask yourself: which Pardot automation should I choose?