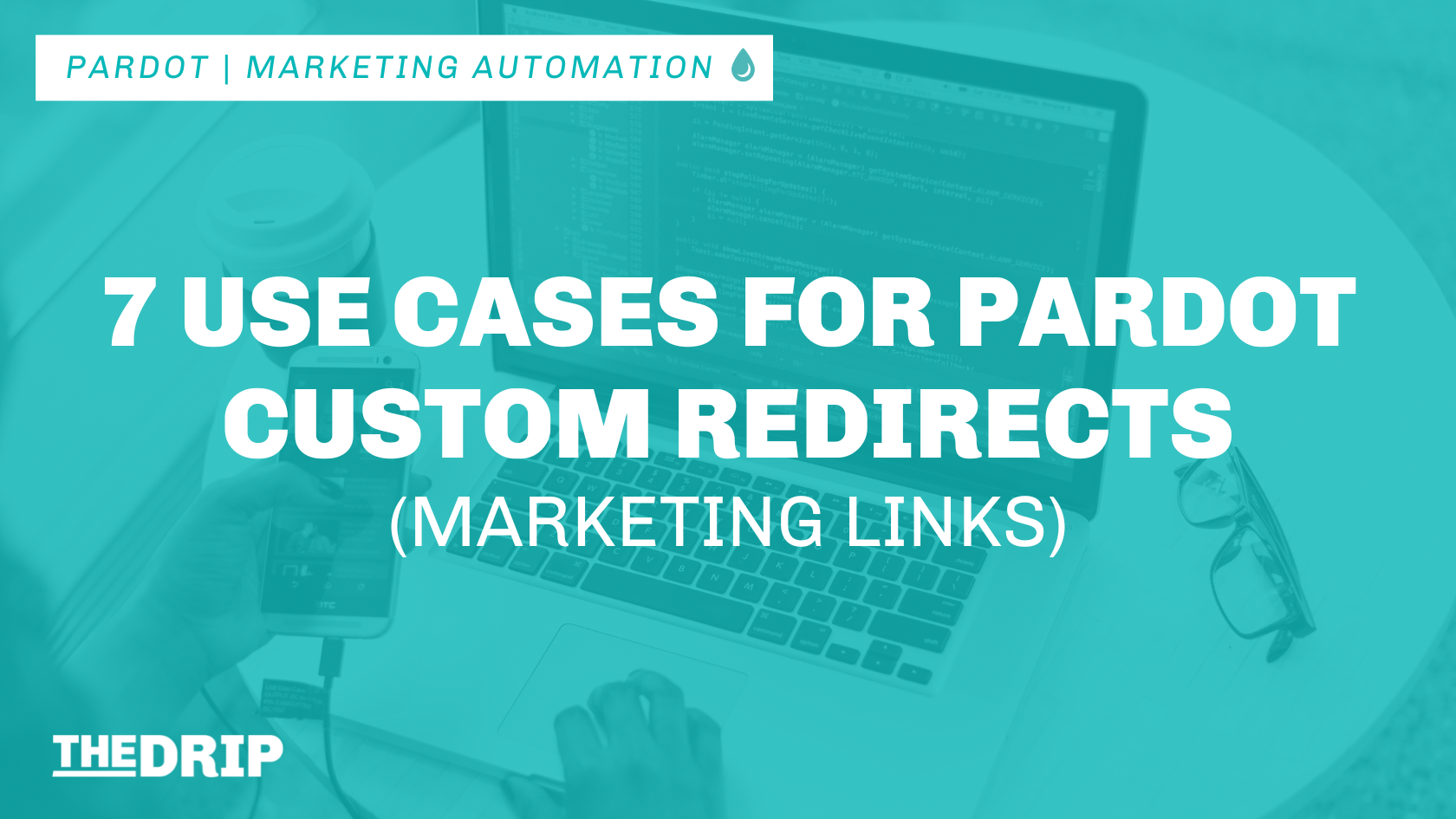 Custom redirects enable you to track link clicks on your marketing content (your website), on third-party websites, and other locations. Also known as Marketing Links in Marketing Cloud Account Engagement (AKA. Pardot), a huge advantage is that Completion Actions can be added, so that Pardot makes an automated action when a prospect clicks the link.

There’s no doubt that custom redirects are a key Pardot feature, capturing link clicks that would have otherwise been left unrecorded. However, due to the changes in how cookies function with Pardot, a prospect must already have been identified on the particular browser they are using, i.e. been cookied with your Pardot tracking code in order for completion actions on custom redirects to fire. This means that you will need to think smarter about who custom redirects should be designed for (i.e. known prospects that interact with your brand consistently).

With a little imagination, we can think of ways to use these links to track (cookied) prospects, and get an indication of anonymous visitor interactions. Enjoy these use cases for custom redirects – the common and the lesser-known!

How a Pardot Custom Redirect Works

A custom redirect is a link generated in Pardot (Marketing Cloud Account Engagement) that is trackable. The main advantage is Completion Actions can be added (so that Pardot takes an automated action when a cookied prospect clicks the link).

A custom redirect report will show you two figures:

You will see that the custom redirect page is made up of three key parts:

In short, completion actions on custom redirects aren’t totally reliable – actions will only fire when the cookied prospect is using the same browser/device that they were cookied using.

Let’s crack on with the use cases for Marketing Cloud Account Engagement custom redirects!

Use custom redirect to track clicks from social posts. Pardot does have social media connectors (LinkedIn, Twitter, Facebook) that will do this for you but there are functionality gaps that custom redirects fill:

All in all, using custom redirects gives you more flexibility for social media link tracking. Just remember the limitations with cross-device tracking, as the prospect won’t be cookied if they switch devices/browsers, therefore the ‘social click’ activity won’t appear on their prospect activity.

Placing banner adverts on third-party websites means that you lose some visibility into the traffic they are directing to your own website/landing pages. The website analytics tools you would use, namely Google Analytics, won’t reach to third-party websites.

While using UTM parameters on banner ad links will give you an idea of inbound traffic sources in Google Analytics (and from form submissions) – and is the most reliable for uncookied prospects – in conjunction with custom redirects, you will be able to:

Real-life example: One of our sponsors used a custom redirect in a past campaign, to track the traffic that goes from The DRIP to their website. Even if the prospect doesn’t fill out the form to download the ebook, they will know the total number of clicks that link received.

This is my favorite use case for custom redirects. You can embed a survey question, gather NPS, or ask other key questions – yes, possible without extra survey tools (budget-saving).

NPS (net promoter score) is designed to measure loyalty and brand promotion among your customers by asking: ‘how likely are you to recommend us?’ on a scale of 0-10 (not at all likely to extremely likely).

You can run a simple NPS survey in Pardot using custom redirects. Note: This solution will no longer give you 100% accurate data; sure, you will be able to see the number of clicks across all numbers (indicating general consensus about your brand), however, only cookied prospects using the same browser/device that they were cookied using will have their prospect record updated.

READ MORE: How To Run An NPS Survey With Pardot (Account Engagement)

To continue with this easy approach, all you need is:

Images in the email are hyperlinked with each of the 10 custom redirects. These act like buttons that a prospect can click. Of course, there are further steps and considerations to the full NPS setup but this gives you the essential overview.

READ MORE: How To Run An NPS Survey With Pardot (Account Engagement)

Apply the same concept in the previous use case to any other questions (that have a set number of answer options). One client I worked with used this trick in their follow-up campaigns to ask if prospects were still interested in their enquiry (lead, or open opportunity) – and if yes, when they would like for you to get back in contact.

This is a great idea if you have a long sales cycle. Give prospects control over when they will be ready to move towards a decision. You can collect these answers either as a custom field (like the NPS example) or by adding them to lists.

Note: Again, only cookied prospects using the same browser/device that they were cookied using will have their prospect record updated by the completion action.

Files, such as PDFs or images, that you use to market, may not actually be stored in Pardot. You could:

The good news is that you can use custom redirects to alleviate these pain points and track the number of people that access that file (even on external websites or portals).

Direct mail has been experiencing somewhat of a comeback. Many marketers thought physical mail could be the antidote for digital overload and inbox saturation. How do you stand out in the inbox – get to the doorstep, instead?

Difficultly in measuring ROI was a turn-off. After all, direct mail campaigns are expensive – the design, printing costs, postal costs – its no wonder marketers became cynical.

The best tactic to bring direct mail campaigns to meet with digital tracking could be to ask the recipient to claim the offer or prize by visiting a link. Little do they know, that the URL printed on paper is a custom redirect. You have the freedom to set the URL ending as something user-friendly, for example: go.thedrip.com/redeem-offer

Note: this relies on the prospect being known (cookied) in Pardot. Otherwise, you will need to include a form to ensure prospect activity tracking is in place for that individual.

When looking at your email reports, have you thought: “What if these clicks weren’t clicks made by real prospects?” An email could be opened and scanned by “bots” on behalf of a prospect to check there is no malicious content in the email.

By placing a hidden custom redirect in the header, body, or footer of an email (not visible to a prospect viewing the email), we can confidently say that the link has been clicked, that click certainly wasn’t a prospect!

There’s no doubt that custom redirects are a key Pardot feature, capturing link clicks that would have otherwise been left unrecorded. With a little imagination, we can think of ways to use these links to track (cookied) prospects, and/or get a good feel for anonymous interactions.

I sound like a ‘stuck record’, but it won’t hurt to say again: Completion actions on custom redirects will only update the records of cookied prospects using the same browser/device that they were cookied using.

With this in mind, ensure that you are using custom redirects responsibly. Take the numbers with ‘a pinch of salt’, and don’t rely on them for critical reporting when you know that some prospects won’t be using the same browser/device all the time.

While click counts will still appear on the ‘unique clicks’/’total clicks’ fields, but they will remain anonymous.