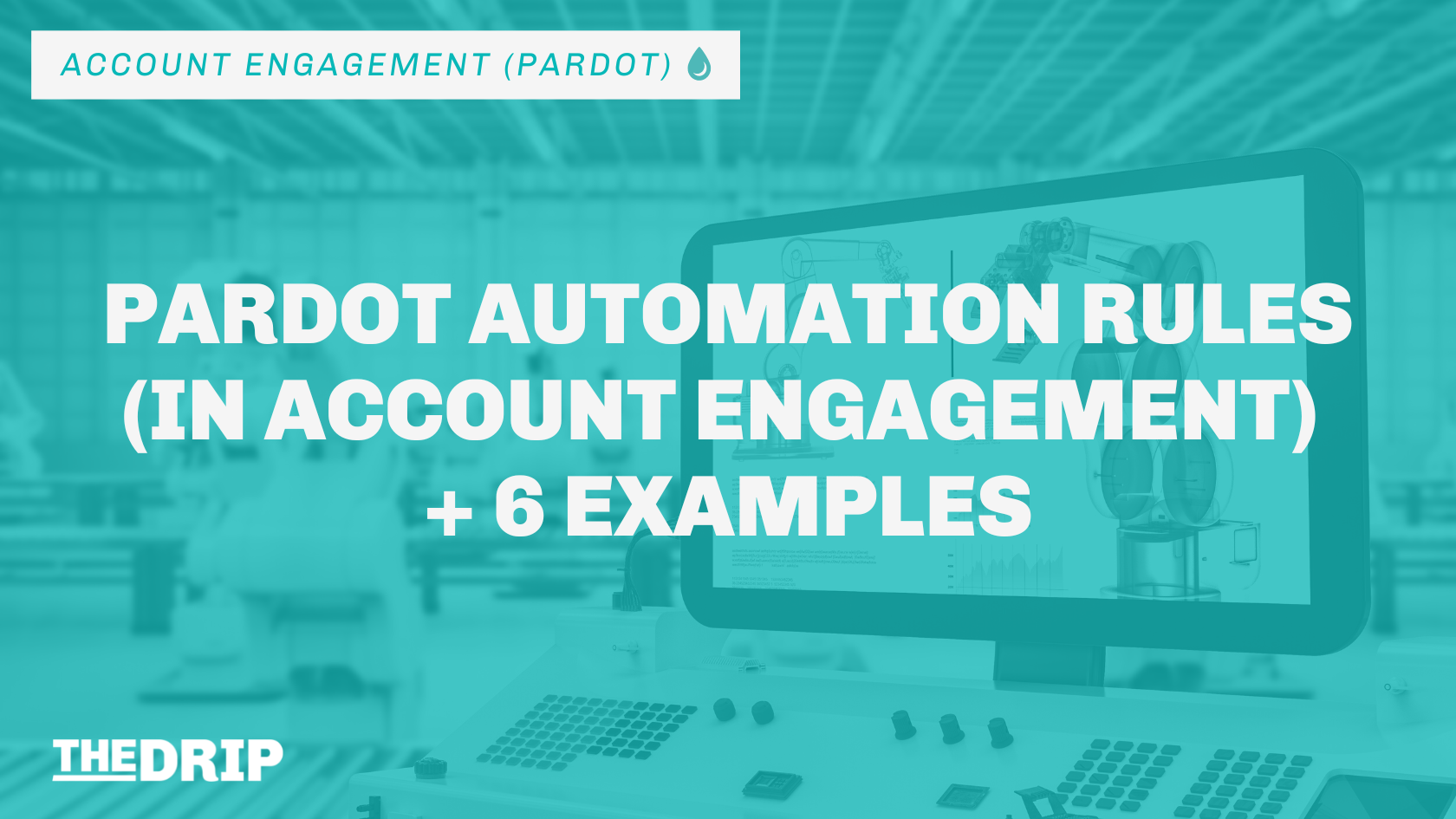 Pardot automation rules have been serving as the “go to” automation in Pardot (Account Engagement) for a long time. They are the automation type with the most broad coverage and versatile choice of actions.

This guide will cover what automation rules are in Pardot, tips to take automation rules further, and act responsibly (avoiding unintended consequences!), and some creative use cases to try.

What are Automation Rules in Pardot?

Automation rules are broken into two parts: Rules and Actions.

Match Type: Match All vs Match Any

There are two match types when working with automation rule criteria (the same also applies to dynamic lists). When there are multiple criteria, you are telling Pardot to:

Once activated, automation rules will actively assess prospect criteria, ie. they run in the background.

Automation rules are retroactive, meaning that once activated, the rule will scoop up any eligible prospects and apply the action/s, no matter when the prospect became eligible.

The baseline for Automation rules is the whole prospect database – in other words, you are starting with a blank canvas that you narrow down using ‘Rules’ criteria.

With other types of Pardot automation, such as Engagement Studio actions, the baseline prospects eligible to be processed by the rule/s are already limited (i.e. in Engagement Studio, it’s the members of that program).

Automation rules are isolated from campaigns. Use automation rules for use cases where you would like to potentially include any prospect from your whole Pardot database, or to process data ‘heavy lifting’ without needing to export prospect data to manipulate it.

Automation rules are versatile. The can be used for both broad, and highly segmented automations. This sounds contradictory – this is what we mean:

Here’s a basic example to get you started. There will be more ways to use automation rules later in the guide.

Automation rules are evaluating all the prospects in your Pardot account (remember these automations are not tied to a particular asset!) therefore, the first criteria should tell Pardot to look for only prospects that have submitted the form. Use the match criteria:

Next, tell Pardot to single out the prospects you want to apply this specific action to. I’m going to use the German example again, which would work as:

Match type: Ensure you have ‘Match All’ selected so that it will only pull in prospects that have submitted the form AND are from Germany.

Actions: Set which actions should happen to them, e.g. assign to user, add to list, etc.

Automation rules sit in a paused state when you save them. This is to give you the opportunity to run a preview. Running the automation rule “preview matches” is highly recommended to see how many prospects will be processed by the rule. Once you click “Resume” its tricky (if not impossible) to revert back to the previous state.

Automation rules have the ability to repeat, and marketers can define how many times they can process eligible prospects, and how often.

Automation rules can be set to restrict the number of days between ending and reentering (“Days before eligible to reenter”), and/or the number of reentries to the rule:

Once a prospect had been processed by an automation rule that is not set to repeat that would be it. Spent. Finito. The prospect would be ignored in all future evaluations for that rule.

When you enable an automation rule to repeat additional options appear:

Example: An automation rule is set with a repeat frequency of one week. When it starts, the rule matches a prospect’s criteria. The rule applies the action. Now, a week must pass before another match can occur (if the criteria is still met). If the Prospect criteria matches more than once in this week, they will be ignored.

Everyone should audit their Pardot account once a quarter. Automation Rules are useful but have tight limits – a primary target for audits. Multiple individual rules will soak up a lot of processing.

In a typical Pardot account (Plus edition), you’re given a limit of 100 running automation rules. That’s a heck of a lot to keep an eye on! Plus, notice how I said running rules – paused automation rules don’t count towards that limit, so you could have hundreds more lying stagnant.

Pardot (MCAE) automations are easy to create within a few clicks – which is a blessing but can also become a curse. The number of automation rules will quickly mount up in your account if there’s no overall design plan or control.

Creating both a completion action and an automation rule with the same triggers and/or actions is scarily easy to do. Take score adjustments as a prime example – you can increase a prospect’s score. Then, add into the mix Engagement Studio actions. And don’t forget about the Salesforce automation that’s impacting Lead/Contact data mapped to prospect fields, primarily Salesforce Flows, and (until they are retired), Process Builders and Workflow Rules.

You can see how easy it can be to end up with ‘automation spaghetti’.

READ MORE: How Marketing Teams Cause Technical Debt – and How to Solve It

Pardot quietly introduced a description field on automation rules in 2017. Although seemingly small, working as a consultant at the time, I was delighted by the update.

Just like in Salesforce with its field descriptions (for admin use) and help text (tooltips when hovering over fields), automation rules should have context.

Are you in the habit of adding notes in the description field when creating or editing automation rules? I’m sure you’ve had that moment when you wonder: “Why was this automation even created in the first place?”

Reasons for adding a description field can include one (or all) of our four “C’s” – Cleaning, Collaboration, Context, Caution.

Automation rules are standalone automations, which make them tricky to audit.

Following Apple’s Mail Privacy Protection (MPP) announcement Pardot product team thought ahead. You can find where email opens are being used across your Pardot account with the Email Open Rule Audit Tool, a page showing which automation rules rely on email open data.

At the time of writing, there are two email builders in Pardot (Account Engagement). The good news is that you can use the “Activate Email for Automation” button to ‘push’ enhanced emails (built using the Lightning email builder) for use in automation rules and completion actions.

6 Ways to Use Automation Rules in Pardot

Earlier in the guide, I shared a basic automation rule example so you could wrap your head around how they work. Now that you’re clued up on the considerations for using automation rules, let’s see more ways they can be used.

When a prospect is ‘sales-ready’, it’s your job, as a marketer, to ensure that these prospects are getting picked up by the assignment workflow. Note that a prospect must be assigned before they can sync to Salesforce via the connector.

If only there was a neat ‘Seniority’ or ‘Management Level’ field to categorize prospects according to their position in the org chart! Sadly, this doesn’t come out-of-the-box.

Advocate for a ​​‘Seniority’/‘Management Level’ field in Salesforce on the Lead and Contact objects. It’s best to use Salesforce Flow to categorize people’s job titles.

If that’s not viable, you can create a ‘Seniority’/‘Management Level’ field in Pardot (Account Engagement) and use automation rules to categorize people’s job titles, then update the ​​‘Seniority’ field according to the individual’s job title.

As a prospect engages with your marketing content, their score will increase over time. When things are good, they appear good; however, when a prospect is uninterested and doesn’t make any new activity for a period of time, judging by their score, things still appear good. What’s the deal here?

Pardot will increase prospect score based on activity but it won’t decrease scores due to inactivity.

Prospect score decay, as it’s commonly known, requires intervention using automation. Using an automation rule, you can set criteria that looks for prospects who have not made an activity in a certain period of time, such as 1, 3, or 6 months, and with an action to set the score to 0.

Spam leads are becoming an increasingly common issue. The problem with spam form submissions is that once they are created as Pardot prospects, they can make their way into your automation, assignment rules, and then into your Salesforce org.

Once you’ve identified commonalities in spam submissions, you can create an automation rule, using the match type as ‘match any’ to ensure that Pardot is scanning your incoming prospects looking for this or that, therefore picking up any matches.

In the ‘Actions’ section, add the following actions:

5. Combine values from multiple fields into one

There’s a creative way to get around one dynamic content limitation. Using an automation rule you will be able to combine values from more than one field into one. The new field can be the basis for the dynamic content variations.

Or, maybe it’s due to the prospect being a member of a list, or they’ve completed a certain form. Regardless of which, all you need is an automation rule to populate that new field.

What if you wanted to set up an invite-only event, just for a select few VIPs?

By using a simple automation rule, you can identify prospects that:

Then, add an action to remove them from the list, notify admin user, and/or send an autoresponder email.

READ MORE: How to Make Your Pardot Event Registration Invite-only