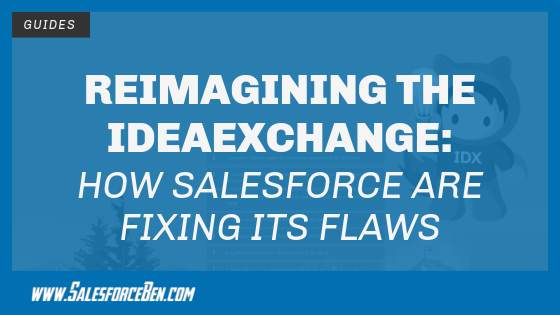 Salesforce have wanted to stand out from the Enterprise software crowd ever since they were founded. Allowing customers to directly influence their product roadmap with their future feature ideas, they believe, has been a big factor in the sustained popularity of the Salesforce platform – after all, what better way to develop products customers crave?

Salesforce needed a smart way to capture and rank customer-requested ideas for the Salesforce of the future. The driving ethos was a platform that would democratise which items would join the product roadmap, and of course, all good democracies involve proceeding with the majority vote. Salesforce knew that an open feedback platform using a points-based system to fairly rank ideas would be the smartest way to do this.

The IdeaExchange was born.

Source: Parker Harris’ True to the Core: How will Customers Influence our Product Roadmap
(*statistics true as of November 2018)

It’s an impressive venture that has paid off for Salesforce and their most keen users. Outside of the actual features delivered, the IdeaExchange has fostered two values important to Salesforce: transparency and empowering platform evangelists with a voice.

However, the cracks have been forming.

The IdeaExchange: What went wrong?

Parker Harris, co-founder of Salesforce ran a session at Dreamforce ’18 titled: “True to the Core: How will Customers Influence our Product Roadmap“, that caught people’s attention.

How could such a great concept be flawed in any way?

“This idea was created when Miley Cyrus was still Hannah Montana”

Aside from the comedy value, this is true. I took an interest in the AppExchange back in 2017, when I wrote “IdeaExchange Most Wanted: top 5 requested Salesforce features“. What became clear to me was that there was little movement on some of the ideas:

“Dependent Page Layouts have been on the IdeaExchange for a whopping 10 years..accumulating over 73,000 points, and 29 merged ideas. Clearly it’s something on people’s minds.”

And again in the 2018 edition of the same post:

Regardless of how many thousands of points the ideas racked up, they remained stagnant with no action, and no feedback…

Long periods of silence from Salesforce on ideas and their progress rubbed a lot of contributors up the wrong way. It gave the impression that some ideas were being swept under Salesforce’s carpet, in the hope they will be forgotten about rather than saying ’no’ outright.

It’s argued that some Ideas posted are gaps in functionality, or appear to be admin configuration capability that’s been overlooked (example). A bug would be considered a limiting flaw in current features, vs. an idea which is a future ‘wish list’ item.

On the outside, we don’t know how complex an idea would be to implement. From our surface-level point of view, we don’t truly know how the platform products are architectured – we can only assume!

These flaws have been the source of frustration across the Salesforce Ohana, leading to criticism of not only the IdeaExchange platform, but left some people feeling Salesforce had not stuck to their word. To address this, Salesforce took a novel approach in the Dreamforce session – to have Salesforce executives read out scathing criticism from Twitter. Wind forward to 05:30, it makes for good entertainment! 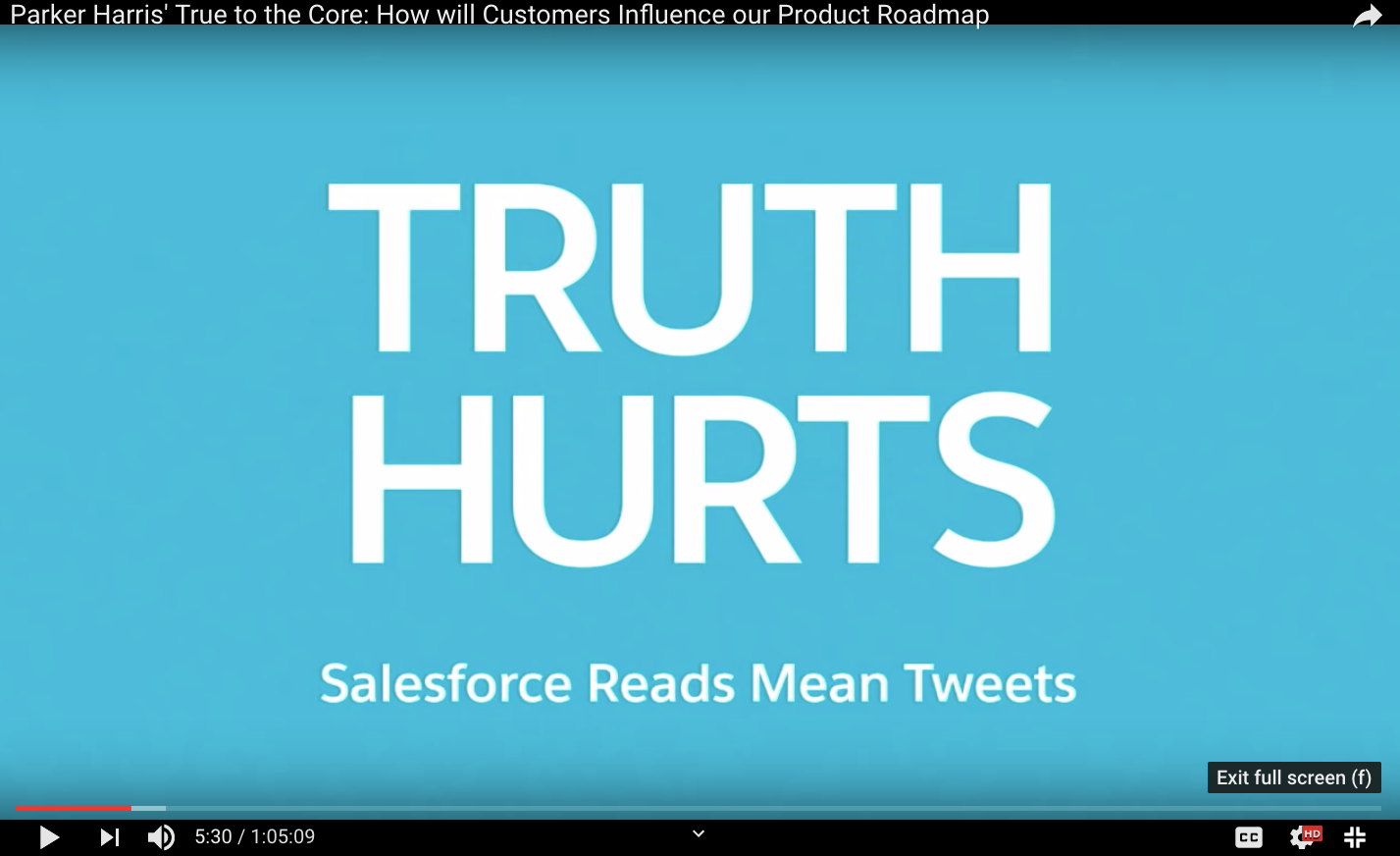 Salesforce see the IdeaExchange as an evolution, and this next stage will be a big improvement for how Salesforce involve the community in the product roadmap process, giving us an ‘actionable voice’, and as Brett Taylor, Chief Product Officer, put bluntly: “not just screaming into the void”.

Idea prioritisation is required to marry up what users see on the platform and their wildest wishes, to the reality of how Salesforce product development actually happens. Enforcing prioritisation paves the way for a two-way dialogue that will deliver results, rather than dropping ideas on to the platform and hoping for the best.

This is how it will run.

You are given a limited number of points as ‘coins’, for example 50 coins. There are a selected number of top ideas that are possible to work into the existing platform products; ideas that are not possible have already been eliminated by Product Managers by this stage, maybe the feature would have posed a security risk, or another feature is acting as a dependency (therefore blocking any progress).

Where do you place your coins?

The ideas are weighted according to how much effort it would take for Salesforce to roll-out, effectively representing the product development resource available. A trade-off is necessary, and you have to be selective. Do you spend all your coins on one single idea, or spread them across smaller ‘quick-wins’? 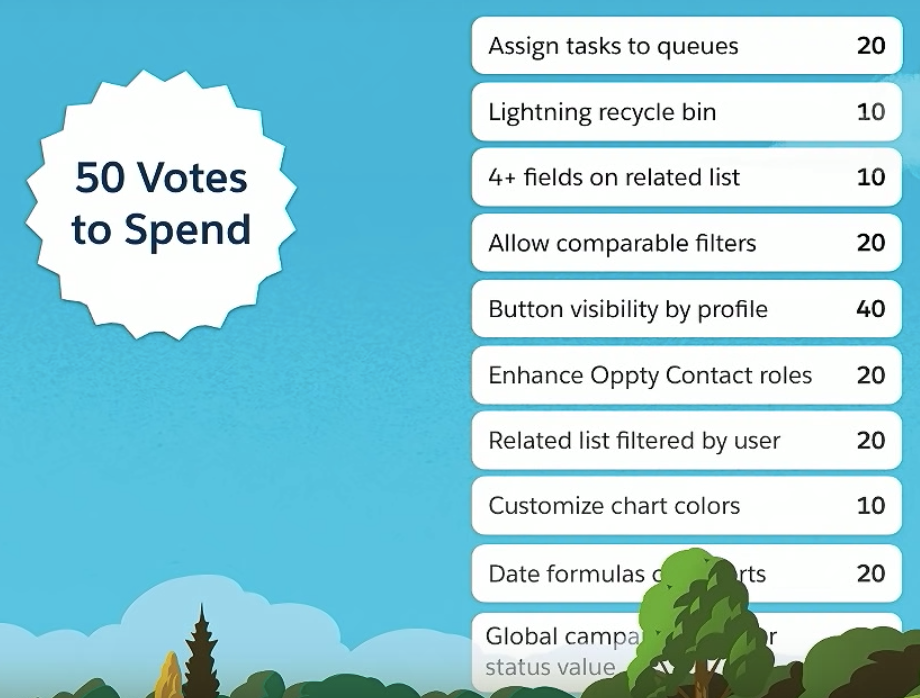 ‘Help Shape Summer ’19’ was a live demo of this in the session recording. How many of the features have actually made it into the Summer ‘19 release, I wonder? 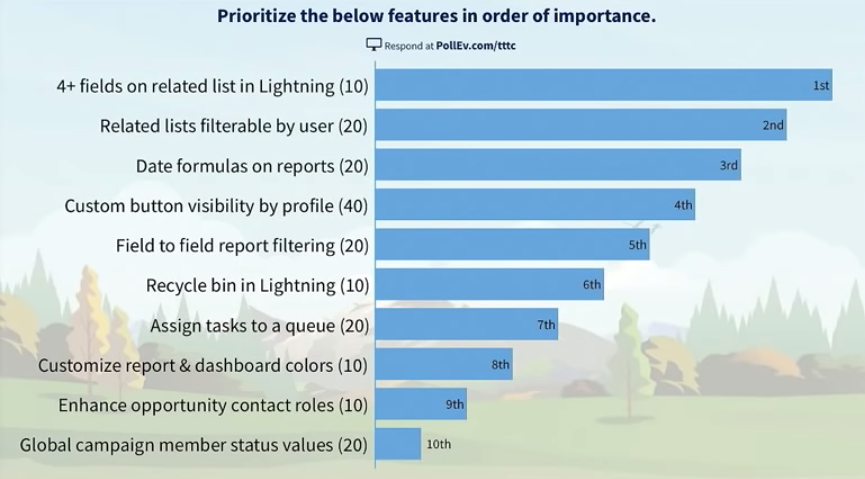 New Cycle of Community Planning: Why This Works Better

The voting and ‘sizing up’ of ideas will become iterative, with a new sequence that will go from community ideation to product managers, who will assign weightings to the ideas and give a revised selection for the community to prioritise with their limited votes. 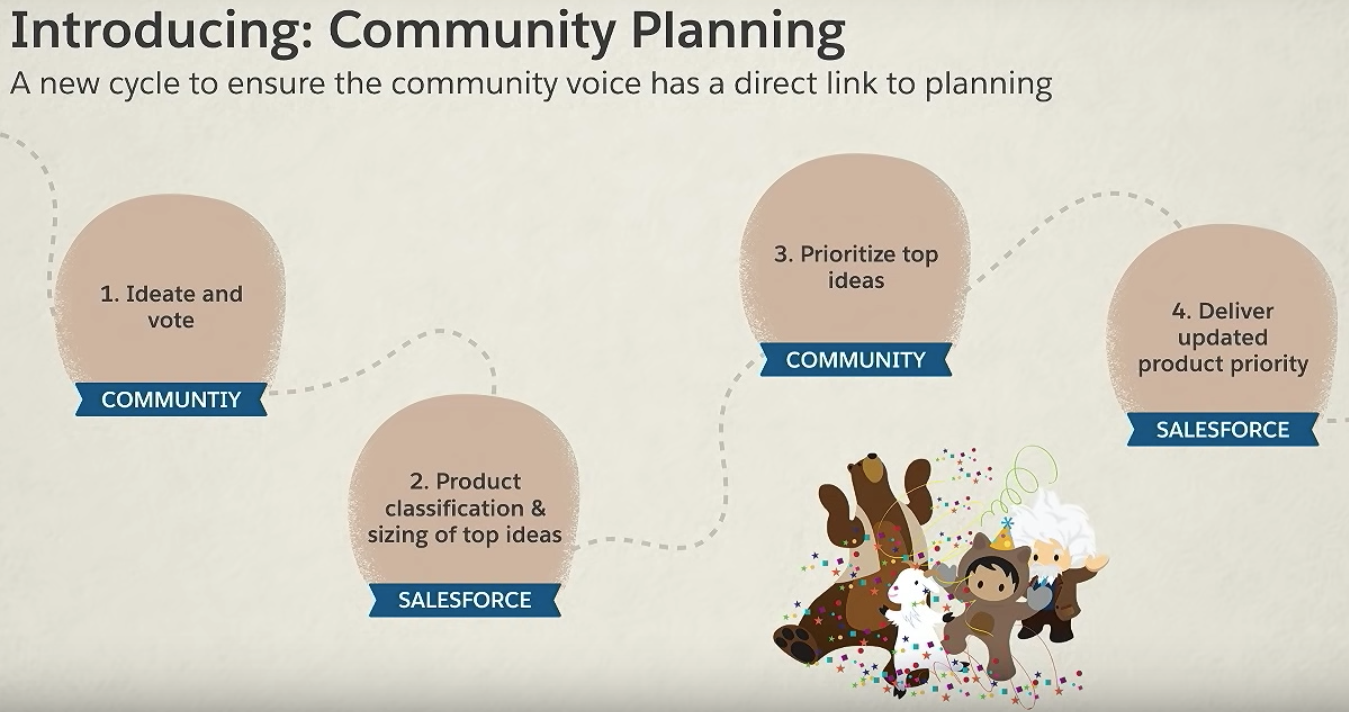 The first feature prioritisation survey went out earlier this year, and closed early February. Salesforce still share the disclaimer that “the scope, timing, and availability of these features are subject to change as we dig deeper into them”; nevertheless, it was great to see this initiative become tangible:

The survey will happen 3 times a year, so keep an eye out for the next one. Finally we will see Salesforce Product Development working hand in glove with the community, with clear communication over feasibility and timelines.

Salesforce have wanted to stand out from the Enterprise Software crowd. Allowing customers to directly influence their product roadmap, they claim, has enabled them to build the products customers need and build trust and engagement with their community of enthusiasts.

Despite the flaws that began to show as the IdeaExchange aged, I think the way Salesforce are tackling it is genius. In my opinion, many business have something to learn from Salesforce’s pioneering way to capturing and actioning their community’s feedback, and this SaaS leader is far ahead of other vendors.

The IdeaExchange is an evolution, and this next stage will be a big improvement for how Salesforce involve the community in the product roadmap – Product Development working hand in glove with the community.

Once again, I highly recommend watching the Dreamforce session: Parker Harris’ True to the Core: How will Customers Influence our Product Roadmap. If you are interested in digging further and staying up to date, this Trailblazer Community group will have the information you need.

4 thoughts on “Reimagining The IdeaExchange: How Salesforce Are Fixing Its Flaws”