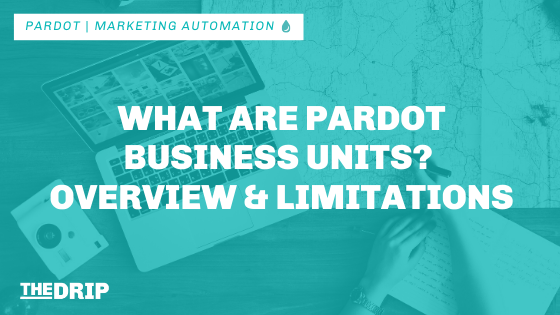 Marketing Services Consultant at Bluewolf, An IBM company. I have been working with both Pardot and Marketing Cloud for 4 years.

Pardot addressed a major limitation in their platform last year when they introduced the much needed Pardot Business Units (BUs). With strong competition, such as Marketo’s well-established Partitions and Workspaces, has Pardot done enough to fulfil the needs of enterprise-level B2B marketers?

I’ve been working with Pardot now for 4 years, which includes 5+ Pardot implementations. I have implemented Pardot BUs internally, and was one of the first in my organisation to receive the Pardot BU soft accreditation. Using what I’ve learned so far, this post contains a quick overview of what Pardot Business Units are, who should use them and why – then some current limitations to consider before setting yours up.

Pardot Business Units are separate databases within a Pardot account that allow Pardot customers to partition their prospects, campaigns and assets by regions, products or services. The BUs will remove the necessity to connect multiple instances of Pardot to Salesforce in order to restrict data syncing to each Pardot account. They are available for Pardot Advanced & Premium edition customers only.

Who Should Use Pardot Business Units?

As always, there are a few restrictions to be considered before using Pardot BUs:

Why You Should Use Pardot Business Units

Before Pardot BUs, access to prospects could not be restricted. Anyone who has access to Pardot (and has a user role greater than Sales), has access to all the prospect records.

Now, Pardot admins can restrict access based on products, services and regions by partitioning data in BUs and assigning users to each BU.

The new feature also eliminates the need for complex selective sharing rules by introducing the Marketing Data Sharing criteria. A single Salesforce field can now determine which Pardot Business Unit your prospect data will sync with, and any prospect that no longer matches the criteria will automatically be suppressed; for example, when country equals Germany, sync the Lead with the EMEA BU.

Before Marketing Data Sharing, Consultants and Pardot Admins had to set the Salesforce Organisation-wide Sharing settings (Org-wide Default) to private, just so they could then include Sharing Rules that would open up particular records to the Connector User. In a lot of instances, companies do not want to have an org-wide default of private, but thankfully Marketing Data Sharing and the Pardot Connector v2 are well on their way to simplifying record access for Pardot Admins.

If the Pardot account was purchased after 25th April 2019, users will also have the ability to switch between BUs using the new Account Switcher feature. No longer will users need login and out of individual Pardot accounts. This feature can be accessed from Salesforce and will only impact Pardot product elements.

Finally, Pardot BUs will allow customers to use multiple Email Sending domains and Tracker domains across their BUs. Whilst it will still be required to set a Primary CNAME additional CNAMEs will be available as an option when creating new assets, allowing for sub-divisions and regions to have their own unique branding.

Are There Any Limitations of Pardot Business Units?

The biggest issue most customers will face is the duplication of records. A new connector setting, released in Spring ’21, allows you to mitigate lead/contact duplication – however, this requires custom configuration and has considerations. The recommendation is to work with a certified Salesforce partner for any Pardot Business Unit implementation (especially if you’re considering using this single lead/contact/person account across business units).

The new Pardot connector also has the potential to cause issues if not carefully planned before implementation. The new Marketing Data Sharing criteria, for example, has no inbuilt verification – coupled with the Salesforce selective syncing – and it can be very easy to create endless sync loops for prospects. When planning the settings, it is important to decide whether to use the new Pardot Marketing Data Sharing criteria or the Salesforce selective syncing, do not use both!

Finally, and building on the last point, it is vitally important to plan, plan, plan. A lot of the new features released as part of the Pardot BU functionality are irreversible, for example:

The irreversible nature of the Pardot BUs means it is important to plan their structure carefully with careful consideration of all their nuances.

The ability to partition data in Pardot into Business Units has addressed a major limitation in the platform, especially as Pardot wish to position themselves as an Enterprise-level marketing automation platform.

However, the nuances and obscurities need careful consideration and planning in order to establish a scalable platform that will grow with the Pardot BU roadmap. If you would like to discuss the new Pardot Business Units further, feel free to comment below.

7 thoughts on “What Are Pardot Business Units? – Overview and Limitations”