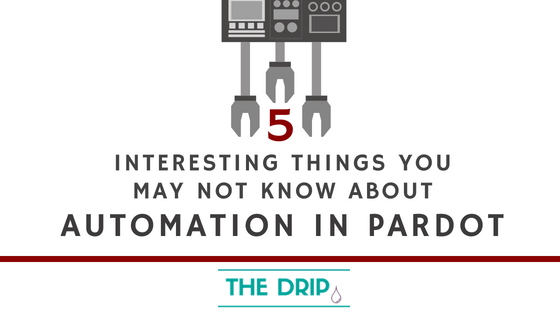 Automation is essential for running supercharged campaigns, and once you’re well-versed on the types of automation in Pardot, you’ll want to maximise their use, both individually, and in combination with one another.

Here are some interesting things to know about automation in Pardot, which will begin to stretch your knowledge – from a typical user, to a powered-up Pardot Admin.

1. Completion Actions can be found in 6 places

You learn that completion actions fire every time a prospect interacts with a marketing asset, eg.:

Which assets can you set this type of action on? Usually, people roll off 3 (the most popular), but here is the full list:

These features are often forgotten about, but are worth exploring as you build out your campaign automation, and connect up the final missing ‘dots’ to Pardot.

2. You can make Completion Actions conditional!

As I mentioned above, you learn that completion actions fire every time a prospect interacts with a marketing asset.

Completion actions are blind to any other criteria, not like other types of automation that fire based on a criteria match. A typical use case where completion actions fall short, would be:

As you can see, the first part applies to all prospects (not conditional), whereas the second part is based on their country (is conditional). Normally, you would detach the automation from the form, and create it as an automation rule.

What you thought may not be possible before, can be done through ‘Form Field-Based Completion Actions’, by pairing a simple script and form handlers with Pardot forms.

Automation Rules are saved with a ‘paused’ status, where you have to press resume yourself. Why? Because Pardot is guiding you to admin best practice, to run a preview before resuming the automation.

Automation rules are the broadest of the automation types (account-wide, mos action options), which means there is more chance the automation actions will have a big impact.

Now the preview function is even more useful with repeating rules. You can use previews to reassess which prospects would be processed on that particular day, because a different group would qualify from one day to the next.

In short: always preview before executing, especially if you know it’s going to do some heavy data lifting!

4. Prioritised Actions: Not all actions are equal!

By ‘action’, I’m referring to the action you want Pardot to take when triggered. In one completion action or automation rule, you can set multiple actions, eg: assign to a user and notify the user and apply a tag.

There are a few actions that will get prioritised above the rest. The general rule of thumb is to ask: ‘is this action likely to affect other automation?’

So, in our above example, the order would be prioritised:

It’s important to acknowledge that the actions won’t follow in the order you place them in. And if you are relying on one to make another to work, (eg. a custom field value change for a variable tag in an autoresponder email)… be careful!

5. See how automation has affected prospects…

If you look at a prospect’s activity history on their prospect profile, you will not be able to see how automation has made changes to their record.

a prospect’s score is increased when they complete a specific form. The score change won’t appear in the activity history.

The reason boils down to the fact that the score change was applied by the system, not an activity the prospect themselves took.

…so, to find the trail, look to the Audits Tab on the prospect record.