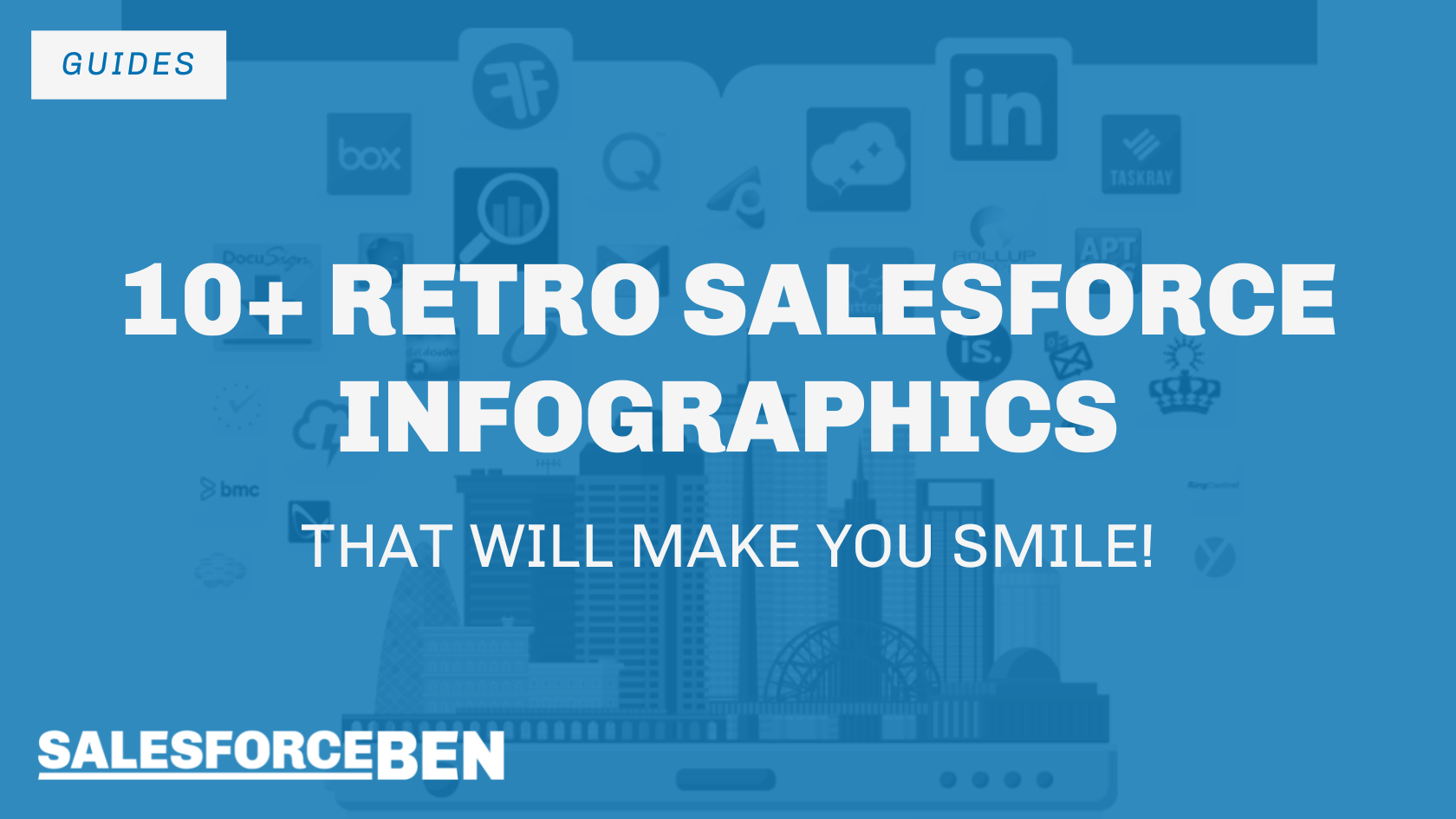 Salesforce has come on in huge leaps since SalesforceBen.com was first launched. Part of my role is to revise the content on the site. With Salesforce technology constantly evolving and expanding into new ventures, we have our work cut out, for sure. Then, one day, I came across these Salesforce infographics.

Who doesn’t love an infographic, condensing key information into a visual, friendly format. The infographics you will tour in this post were published “Everyone Loves a Salesforce Infographic” in June 2015. While the statistics and technology appear antiquated, one thing has proven timeless…everyone does love a Salesforce infographic.

Enjoy these retro Salesforce infographics that would otherwise have been lost to the dark depths of the digital world.

The Salesforce AppExchange is the marketplace to help extend Salesforce. I would be surprised if you haven’t downloaded at least one package from this digital store – with so many innovative partners, components, and free solutions to enjoy.

Do you remember how Salesforce went on an ‘acquisition spree’ in 2016, acquiring around 10 companies in a single year? Well, you would be remiss to overlook all of the historic acquisitions that have made Salesforce what it is today.

This timeline shows us all the Salesforce acquisitions (2006-2011), most of which went on to become Salesforce products and feature we use today (some will surprise you). Salesforce has now made 66 acquisitions in total.

And monetary value? “Over $831mil in acquisitions over 5 years” this infographic states – in 2021, the figure based on where the price was disclosed (27 transactions) is over $63 bil.

What it Takes to Become a Salesforce MVP

Salesforce MVPs demonstrate exceptional leadership qualities, are lifetime learners, who go above and beyond to share their expertise and help the Trailblazer Community. At the start of 2021, there were 200+ MVPs.

My favourite statistic from this infographic? 98% have taken a selfie with SaaSy, who got all the attention in the days before Astro, Codey & co.

“In this fast paced tech world the lines between developer and administrator can become blurred as an individual may take on two roles” – it was true in 2015, and even more so now. For one, Salesforce has continued on their mission to empower Admins with low-code tools that achieve what was only possible with code in the past. Take Salesforce Flow – with clicks-not-code, Admins can create automation that would have required Apex previously.

Secondly, the expectations placed on Admins have grown, to often include understanding code (Apex, VSCode) and managing integrations. The DevOps hype, spurred by the increasing complexity of Salesforce orgs and desire to avoid the risk of bad deployements, is another way Admins are expected to step up to the plate. Safe to say, the “Admin-eloper” persona is becoming more common.

Check out our updated infographic here.

The ‘Modern Marketer’, According to Pardot

Pardot has grown on a crazy trajectory since being acquired by Salesforce, and especially over the past few years as Pardot’s product architecture has become increasingly aligned with the core Salesforce platform.

If you’re familiar with the responsibilities Pardot admins have nowadays, what’s outlined in this infographic pales by comparison. These will only grow in number and scope as Pardot becomes more embedded in Sales Cloud, and more valuable to a business, as a result.

Dreamforce is Salesforce’s main conference that has earned a reputation as an atypical conference, unlike traditional corporate IT events. Attendees enjoy networking, learning at thousands of sessions, and the famous entertainment – it’s a spectacle that never fails to disappoint.

These infographics have captured the run-up to Dreamforce ’15 and ’14. The timeline features the big keynote announcements by year, and the ‘Dreamboat’ that was parked in the bay to alleviate the soaring demand for accommodation.

The Salesforce Economy (The Global Footprint)

Salesforce forecast annual revenues that will exceed $50 billion in 2026 – a far cry from the $4.1 billion earned in 2014. I even remember when Salesforce anticipated their $10 billion milestone, which seemed astronomical at the time!

You can check out our salary guides, per role, for the latest salary figures:

The Salesforce Job Market DID Get Better

There is something persistent that still bugs Salesforce Admins to this day: users who don’t use Salesforce properly. Misuse could include not inputting data, failing to updating records, or generally abusing Salesforce objects.

Many of these tips are timeless, however users have it easier in 2021 and beyond. Salesforce Lightning gave the UI a much-needed facelift and optimization – plus, we know that Slack innovations are likely to supercede Salesforce Chatter.

Salesforce Einstein: One Year On

Fast forward to the present day, there are now 50+ Salesforce Einstein AI products and tools (don’t believe us?) What we predicted in 2016/2017 is a drop in the ocean!

In 2016, Salesforce introduced Telehealth, two-way video chat for Health Cloud (a patient relationship management solution). It seems that Telehealth is no longer around… but these findings from the first ever “The State of the Connected Patient” report remain:

Now known as “Marketing Cloud Account Engagement”, if the name “Pardot” isn’t nostalgic enough, then looking back at these releases will make you appreciate how far this marketing automation platform has come.

Saving the best until last! What strikes me is how long Salesforce was (what we now know as) Sales Cloud; Service Cloud didn’t come on to the scene until 2009! Now, I will leave you to enjoy this bumper infographic at your own pace…

Previous Post: A Guide to 50+ Salesforce Einstein AI Products and Tools
Next Post: Everything You Need to Know About Salesforce Queues