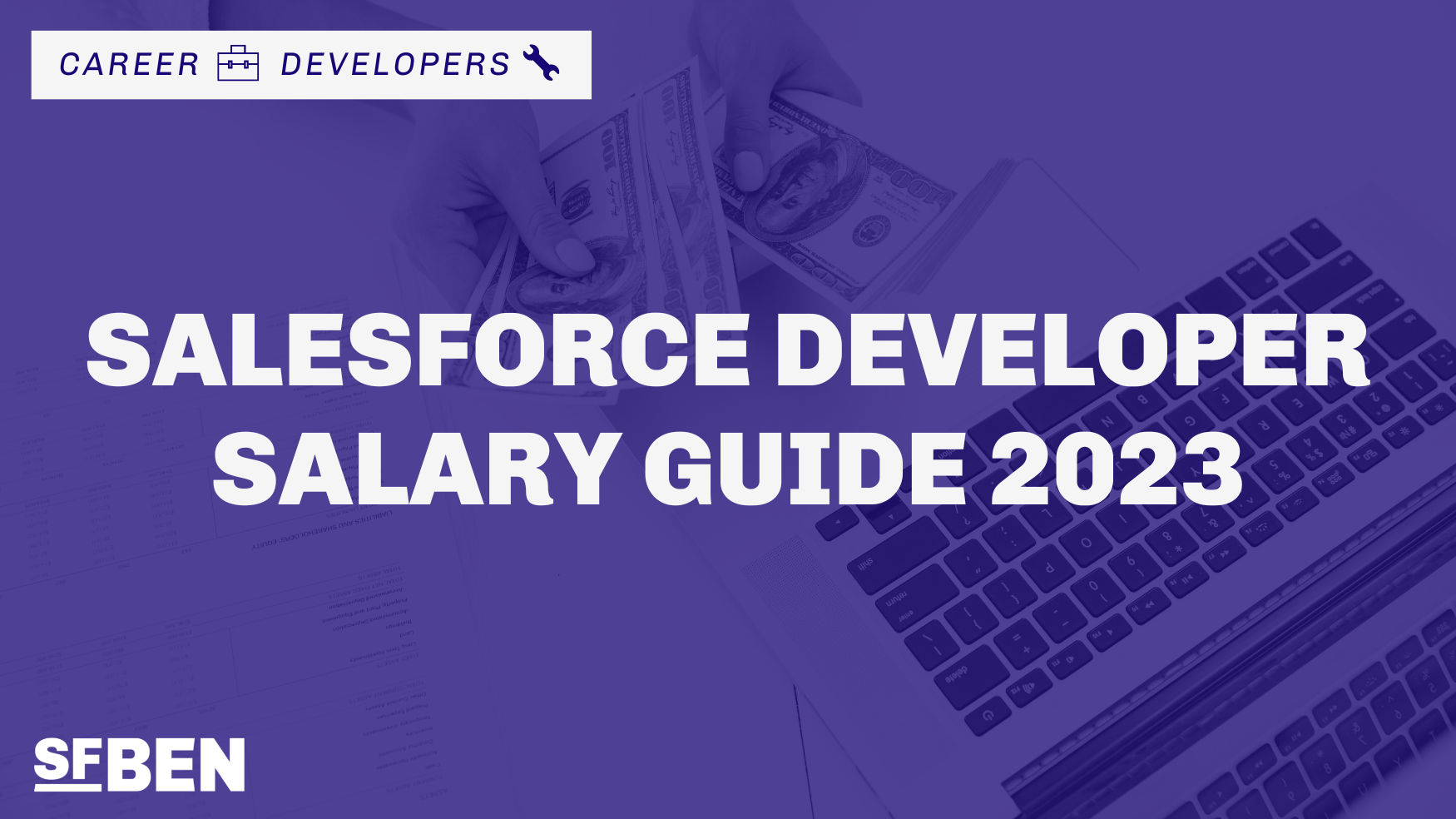 Salesforce Developer salaries are a hot topic in the ever-growing Salesforce economy. Demand for these professionals spiked during the Covid pandemic, fed by the need for rapid digital transformation.

Professionals with the right approach to upskilling and career progression will still find themselves in a good position.

With this in mind, how much do Salesforce Developers make? Read on to find out – plus, we share which factors influence your earning potential, as well as tips on how to improve it.

Jump to: How to improve your Salesforce Developer salary

Read more: What does a Salesforce Developer do?

Data source: The data is from the Mason Frank Careers & Hiring Guide, based on self-reported information from 2,500+ Salesforce professionals, spanning a range of job titles, industries, and geographic locations.

Without context, a single salary figure can be misleading. Certain factors at play can result in differences between one professional’s salary to the next. We will dive into the following factors in this guide:

As with any profession, the more experience and responsibility you take on, the higher your salary expectations should be.

We defined a junior/mid-level/senior developer based on years of experience (not determined by years in the role!) and the tasks that they are carrying out:

READ MORE: What Does a Salesforce Developer Do?

Salesforce professionals love getting certifications – they are a milestone in your career that prove that you know what you are talking about. Certifications can potentially be used as leverage if you are looking for a more senior position internally or looking for a job in another company.

In the annual Salary Survey, respondents were asked which certifications are likely to increase your worth as a Salesforce professional.

Speaking more generally, the survey also asked if they experienced an increase in their salary after earning (any) certification:

Note: In the report’s previous edition, the split was 63% did, 37% did not. While the positive % is higher, the average salary increase has dropped from 26% to 21%.

The chance that your salary could increase with the more certifications you earn can’t be ignored, but should be taken with a ‘pinch of salt’ alongside the other factors.

Salary figures are influenced by location, due to the differences in the cost of living between countries – and within countries (the US is a good example of this economic influence).

Converting all the salaries into US$ makes the geographic comparison easier. Senior Developers in the US reported an average salary of around $155K. The UK developers on average earn $101.4K, in Spain $53K, and in Australia, the figure is $116.5K.

Geographic location plays an influence where demand is greater than the supply of professionals in-region. Let’s not ignore the fact that there will naturally be differences within countries, too. While the pandemic “hybrid”/”remote” working models have democratized location versus earning potential, there will naturally still be some variation.

How to Improve your Salesforce Developer Salary

If you want to increase your salary, this section is for you. First, familiarize yourself with what an entry-level, mid-level, and senior developer does.

READ MORE: What Does a Salesforce Developer Do?

2023 will be the most critical year to jump onto the new technologies – or get left behind. Here are our picks from the pack.

LWCs are seriously becoming the ‘big thing’, especially for front-end development. Since LWCs came out, it has been made explicit that Aura components are approaching their end of life. Salesforce has only maintained VF/Aura for backwards compatibility reasons. You may have been able to get by the last two years without it – but continue, and your career will ‘hit a wall’. Get enabled on LWCs while you have the opportunity to learn without potentially having your job on the line (push rather than shove).

Developers are more expensive than admins – that’s a common trend. Typically, this means there are more admins on a team than there are developers. The ability to effectively communicate with admins, e.g. being able to bounce ideas, should never be disregarded.

Should developers get familiar with Flow?

Yes and no. Learning Flow could potentially give you an advantage in a smaller team. In a larger team, however, you should probably keep your distance as there will be other ‘hands on deck’. Do get familiar with the limitations of Flow, and other areas of the platform that you’re going to be extending for the rest of the team.

Being aware of second generation packaging will be very important for anybody who’s working for an ISV, or in a product situation, where there is the intent for it to go onto the AppExchange. There will come a time when all packages will be second generation packaging – while that’s unlikely to be in 2023, it’s likely that Salesforce will allow free migration from 1GP to 2GP. Potentially, get on board early; Salesforce will give you support because you’re an early adopter.

The cost savings when moving to 2GP are massive in terms of how much time it saves development resources.

“We have 1GP and 2GP versions of our app. The 1GP version takes around 20 minutes to install it in a test environment – you upload it, wait while it has a think, then you’ve got to upload the package, and then wait some more. With 2GP, you can automate this process.”

2GP has a tighter integration with DevOps. You should be striving towards better visibility of your development cycle, but yeah, senior developers.

DevOps is a relatively new concept in Salesforce. In the last few years the tooling has got better – including Salesforce’s long-awaited DevOps Center, and third-party providers. In general, SFDX, is hot, and it’s only going to get more important as time goes on.

READ MORE: The Evolution of DevOps in Salesforce

DevOps is highly applicable to consultant-developers, working in a consultancy where it’s tricky to manage deployments across multiple orgs. Outside of consultancies, it’s still important to use source control and have an automated release pipeline, even if it’s simple to validate whether a deployment will work.

READ MORE: How to Automate Your Salesforce Releases

One of the most important things – and also one of the trickiest.

Entry-level developers will be performing simple unit tests. They tend to write their code in monolithic blocks, which means that tests are a nightmare to write. As a result, tests may not be totally valid.

Reaching mid-level and onto senior level, you need to consider testing strategies. Design code around it being easy to test – utilizing dependency injections and design patterns to facilitate testing. This is a result of encapsulation (breaking your code down into smaller parts that are easier to maintain), allowing you to write tests that can validate code more effectively. Any bad changes to the system will be detected early when tests fail. Failing tests isn’t a bad thing – failing tests is an early warning sign.

Developers should be writing tests to validate that their code does what it’s supposed to do in both positive and negative scenarios. Tests should be done to consider integrations – not necessarily in relation to the integration, but also in the interaction between blocks of code. Integration design within best practice means testing becomes a non-issue.

However, this has led to situations where developers just meet the metric without understanding why they’re actually writing tests. Code coverage should not be considered a barricade. As mentioned above, developers should be writing tests to validate that their code does what it’s supposed to do in both positive and negative scenarios.

For highly complex business processes, understanding how best to work with the Salesforce platform rather than fighting it, is a must. This is where Salesforce Functions come in. Developers should be aware of how they can be used, and when they’re the correct tool for the job.

Keep an Eye on Releases

Be aware of how Salesforces is evolving the platform. Stay ahead of the curve, and you’ll be ahead of most people if you can do something that they don’t even know exists. Are there really people out there who are still creating process builders?

This is a sure-fire way to keep your salary going up, and therefore, keep yourself in demand. Not to mention the positive impact on your productivity, which leads to more free time to do more impressive things. While it’s not absolutely linear, there’s some relationship between this and boosting your Salesforce Developer salary.

Consider Everything as a Learning Experience

You could write a thousand Apex triggers and if you’re not taking the opportunity to improve on them, you could get to the fourth one, and you’ve got 996 remaining, which are all the same. If you’re considering each one as a learning experience, even if it’s just making tweaks, you’re going to get better every single time.

Simply saying “I don’t have time” is not a valid excuse – a bad fallacy, as there’s no sense of opportunity cost “I may be spending an extra 20% on this task now but it will save me 5% time/effort in the next task” – the cumulative effect is going to add up to having a lot more free time to learn.

Be a Go-To Resource

As you climb up the developer career ladder, you should become able and willing to support the rest of the team.

If someone were to approach you saying, “I’ve been doing this and I’m not entirely sure”, a senior developer would be responsive and direct them – maybe with a help article – so they can build up those skills themselves.

There’s no doubt that Salesforce Developers are deserving of their compensation – they carry out a core function that allows organizations to extend Salesforce beyond declarative (point-and-click) configuration, build apps, and in turn, optimize business operations.

This guide has brought context to what your Salesforce Developer salary should (or could) be, with information to reinforce that figure to ensure you’re armed when asking for a raise or applying for a new role.