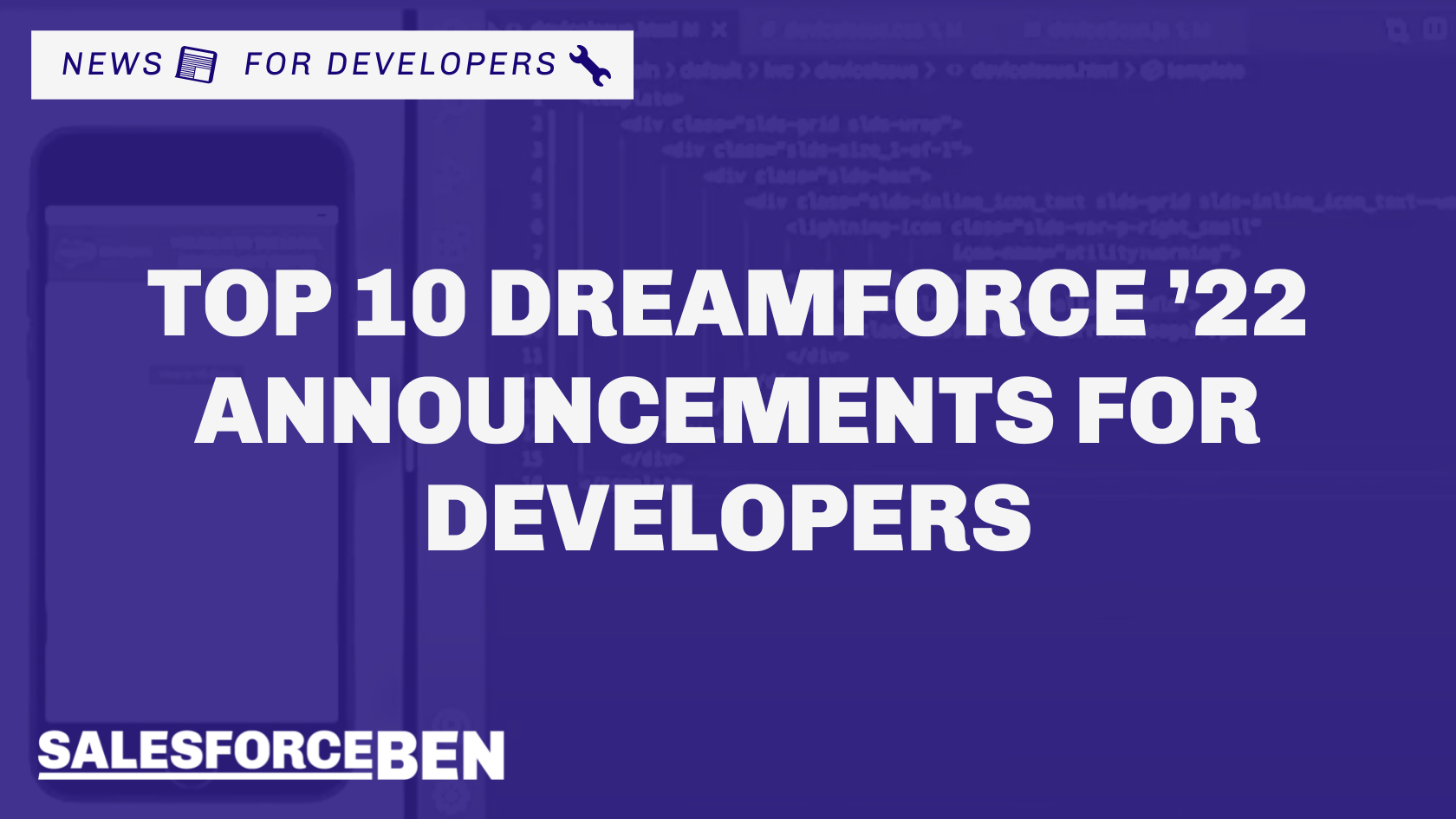 Gaurav is a Salesforce MVP (since 2016), 41 x Certified, has 24 Salesforce AP Credentials, and 5 Mulesoft Certifications - ranked in the top 3 globally certified experts in Salesforce & Mulesoft ecosystems.

What an incredible week – Dreamforce ‘22 ran in its full glory from September 20-22, with nearly 40,000 people attending in San Francisco and 150,000+ catching the streams on Salesforce+. Of course, there were a number of big announcements from the main Dreamforce keynote and lots for Salesforce Architects to cheer about as well. But what about developers?

As they say, once a developer, always a developer. I was in attendance at the Developer Keynote and attended a bunch of developer sessions during the conference. The key headline? Salesforce is ready to roll out the blue carpet for the next-gen developer experience. Here are my top 10 key developer announcements from Dreamforce ‘22.

1. Composable APIs for Genie and SDK

It was no surprise that the new Genie platform hogged limelight in the Developer Keynote as well. There was a demonstration of Composable APIs and how they can fetch data from the CDP (Customer Data Platform) using a simple API call in Apex.

The overall objective is to fetch data from sources such as CDP and then use LWC (Lightning Web Components) to build out custom user experiences.

The DevOps Center has been in beta since June and Dreamforce ‘22 was the first time Salesforce showcased this offering in front of a large developer audience.

Of course, the big question remains: when does DevOps Center go GA? And what does it mean for the Salesforce DevOps ecosystem, as well as players such as Copado, AutoRABIT, Flosum, and Gearset, among others?

The other big beta product making huge waves at Dreamforce was the Code Builder tool – touted to be a fully-functional IDE for Salesforce development running on the browser.

I’ve played around with the beta since its early days and while it’s not quite on par with the installed IDE experience, it’s surely getting there. I saw a lot of interest from the developer community in the Code Builder tool at Dreamforce and I’ve no doubt that it will mark a huge paradigm shift in Salesforce development as and when it goes live.

This is a big win for developers to be able to test their LWC components on a mobile simulator – during the development cycle itself. The idea is to leverage virtual device builds of the Salesforce mobile app.

A series of steps is available here. It will be interesting to see how Salesforce evolves this feature to facilitate mobile testing.

Ask any Salesforce Developer and they’ll tell you that the ability of parse CSV files is a much-needed feature in Apex. To date, developers have had to rely on writing custom code to do this or use any open-source solution such as this one. Having this capability natively in Apex will make life for developers much simpler and hopefully their code more efficient too.

Of course, this relies on the DataWeave support that’s been added to Apex.

This one is probably common to developers and architects alike. There has been a lot of interest in the new Pub Sub API – touted by Salesforce as the latest way to build event-driven integrations with Salesforce.

Of course, it will be interesting to see how widely it’s adopted, but it was great to witness it in action, as well as have an open Q&A with the team that built it.

Given all the focus at Dreamforce around no-code and low-code patterns, it was great to see Salesforce launch the ability to embed screen flows in Lightning Web Components (LWC). This was previously possible using the approach mentioned here, but it’s good to see this capability being added directly in the core platform.

Salesforce introduced the GraphQL APIs earlier this year – the idea is to provide more flexibility for developers including:

The big advantage of GraphQL APIs is that, as a developer, you can control what data you want from the server and what data you don’t want, thereby making the API request-response mechanism more efficient as compared to REST APIs. So far, in my experience, I’ve seen limited adoption of GraphQL APIs and I’m hoping that the newly announced enhancements will change that.

While this is more for Slack Developers (than Salesforce Developers), a new SDK was introduced at Dreamforce with a link trigger feature to share workflows anywhere in Slack. Overall, Slack got a ton of new enhancements including Slack Canvas, GA launch of Slack Huddles, and a new re-engineered Slack platform (available in open beta). This is mostly in line with the messaging I had heard at the Slack Frontiers event in New York a few months ago.

There are several other new features that caught my eye including:

Overall, there were a lot of new and exciting announcements, several developer previews, and beta launches for developers at Dreamforce ‘22. It will be interesting to see how some of these new announcements shape up the next-gen Salesforce developer experience in the coming months – and beyond!

All images have been taken from the Dreamforce ’22 Developer Keynote or Salesforce documentation.

Previous Post: Salesforce + Alibaba: New Partnership to Expand into Chinese Market
Next Post: Admins: What You May Have Missed at Dreamforce #DF22