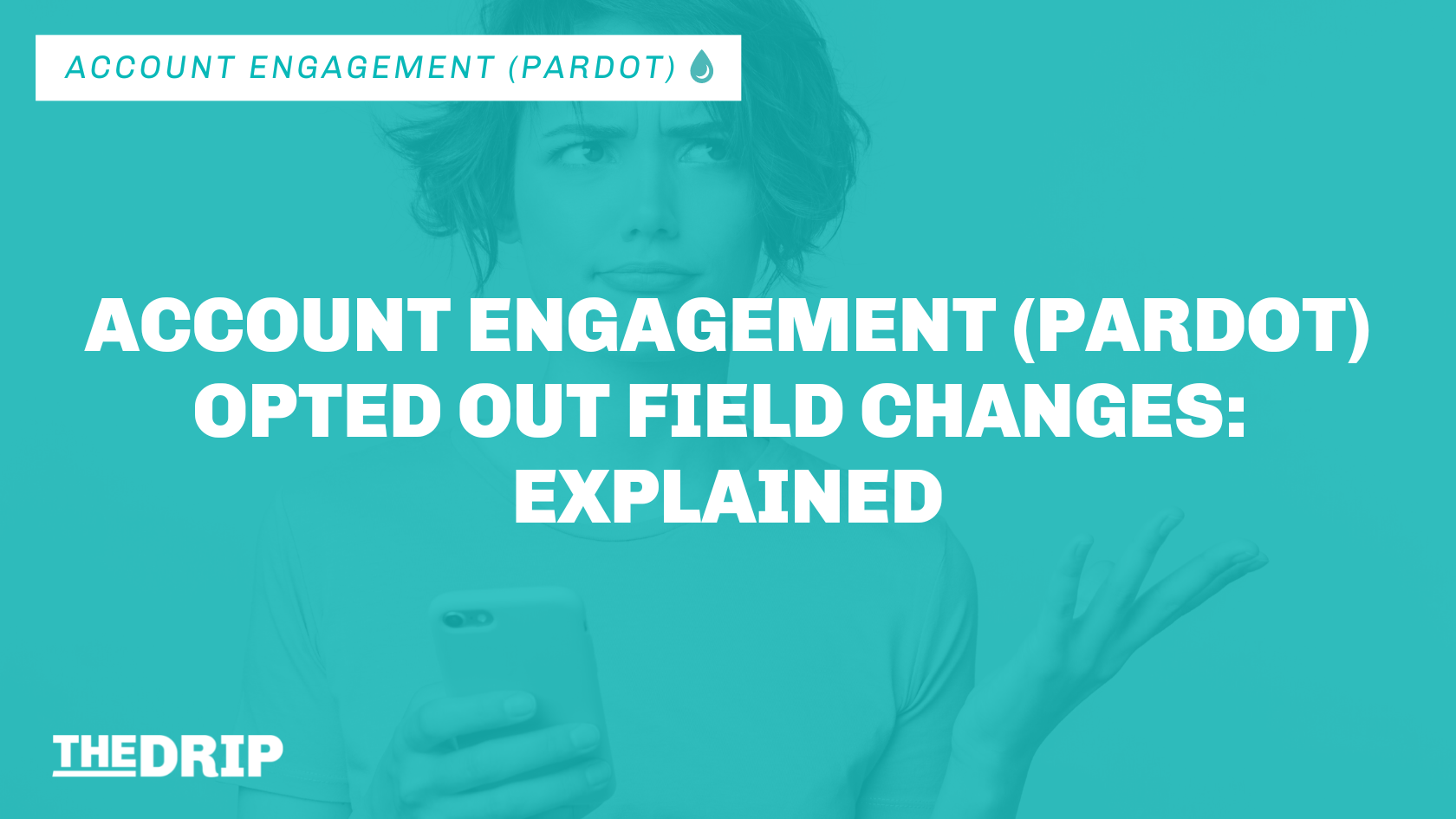 Opted Out is a field found on prospect records in Pardot (Account Engagement) and is called “Email Opt Out” on Salesforce Lead/Contacts. This data point is intended for prospects to control themselves via the unsubscribe link, or by using your email preference center. While Account Engagement users can edit this checkbox field, it’s not recommended, for compliance reasons.

After the two fields were decoupled, if Opted Out is now changed to true, this doesn’t impact the Do Not Email field value (when previously, figuring out what’s what was headache-inducing). However, one update that will be effective February 26, 2023*, caught everyone’s attention: “Control Prospect Opt-out Field Sync Behavior” (ranking no. 4 on the release rundown).

My thoughts are that what grated the wider Pardot community is the fact that prospect mailability has been confusing since the dawn of (Pardot) time. There were changes to simplify mailability fields in 2021 – and now more changes have left marketing admins concerned.

Nevertheless, the changes may not be as serious as one may think. In fact, I’m hoping to refine community feedback to get a wide array of considerations.

Note: My intention is not to go against the decisions made by the Account Engagement engineering team – I’ve listened to and absorbed the reasons why this change has raised question marks and the proposals for going forward.

Pardot Opted Out: Intended Use

The Opted Out and Do Not Email fields were decoupled. Now they operate independently, which reiterates that these fields have new definitions, and new ways marketers should be working with them.

READ MORE: What is a Mailable Prospect in Pardot? Do Not Email vs. Email opt-out

The Opted Out field now must have a designated system of record, either “Use Pardot’s value” or “Use Salesforce’s value”. “Use the most recently updated record” is no longer an option for this field.

When you first enable the Pardot-Salesforce connector, Opted Out is automatically mapped to the “Email Opt Out” field on the Lead and Contact objects. On the other hand, Do Not Email is not mapped automatically to Salesforce (we’ll see later that some organizations deliberately keep this field unmapped to Salesforce).

Since the 2021 update, Do Not Email is treated like any other default field, which gets rid of the ‘stick to true’ sync behavior* that was traditionally the case.

(*i.e., once checked, “true” will always remain true regardless of user/prospect/system edits.)

READ MORE: Getting to the Bottom of the ‘Do Not Email’ Field in Pardot [Infographic]

Now we’ve got to this point, there are two key facts to recap:

So, why make sync behavior so restrictive? For something as serious as prospect opt-out, you don’t want the sync reverting the prospect’s choice back to its previous state. For example, if a prospect opts out using the email unsubscribe link, and a Salesforce user updates their associated Lead/Contact record before the connector sync completes, the prospect would unintentionally be opted back in. The sync behavior options now available ensures that you can pinpoint the true system of record.

Let’s walk through how this would work in practice. In line with the Opted Out intended purpose, logically, you set the sync behavior to “Use Pardot’s value”. This would enable prospects to control the field’s value, and it remains their selected value. If anyone tries to change the field’s value in Salesforce, the field will be reverted back to the prospect’s selection, thus protecting their opt-in/out status.

What if you need people in your team to update the prospect’s opt in status? In the age of privacy and compliance, it really ought to be the prospect themselves making the affirmative action (i.e., the action to opt themselves in, not by someone on your sales/service team using Salesforce).

As a last resort, if a prospect/customer is barking down the phone at your colleagues, they can navigate to the Pardot Lightning App, find the prospect’s record, and edit it.

There is a Pardot URL field on Leads/Contacts that directs to the Pardot Classic app; luckily, there is a trick to open the same prospect record in the Pardot Lightning App.

Regardless of how you access the prospect’s record, this really is not a recommended approach but a workaround for when the situation desperately requires it.

2 Reasons Why Opted Out Should “Use Pardot’s value”

How will Pardot resubscribe work once the change comes into effect? Remember I said that logically, you should set the sync behavior to “Use Pardot’s value”. This would enable prospects to control the field’s value, including resubscribe (i.e., changing their Opted out field from true to false in order to receive emails again).

So yes, if you decide to “Use Salesforce’s value” for the Opted Out field prospects won’t be able to resubscribe themselves.

When Pardot made the move to enforce all users to use Salesforce’s single sign-on (SSO), Identity Licenses were introduced to patch the gaps (to enable single sign on (SSO) for Pardot users without Salesforce licenses). These user records don’t have any functionality in Salesforce, but will have their original functionality in Pardot.

Changing field sync behavior for Opted out (and Do Not Email, for that matter) will impact Pardot-only users; if “Use Salesforce’s value” is selected, these users will lose the ability to manually set prospect preferences.

Let’s now turn our attention to the Do Not Email field, and the role it plays here.

With Account Engagement (Pardot) being a separate app, members of the sales/service teams aren’t going to like hopping between their Salesforce workspace and into Pardot just to amend the prospect’s Opted Out field.

Isn’t this the point? The Do Not Email field exists to still give Salesforce users (internal to your organization) the ability to stop emails being sent to prospects, intended as a marketing suppression field.

Let’s walk through how this would work in practice. In line with the Do Not Email intended purpose, logically, you would set the sync behavior to “use the most recently updated record”. There are two reasons for this:

My recommendation is to only allow marketing team members to edit this field, and to set validation rules to not allow this field to be unchecked if Pardot Hard Bounced is true, which would have been as a result of an invalid email address, etc.

Do Not Email Warning

“Use the most recently updated record” is the logical choice if you will have Salesforce users update the field (as well as respecting the feedback Pardot receives from undelivered emails).

This is the sync behavior option that makes things murky as there’s no guarantee which is the master system for that particular record – depending on the scenario, it could be Salesforce or Pardot. Some organizations keep the Do Not Email field unmapped to prevent this.

Do Not Email: Extra Guardrails

If you are looking for extra guardrails, for example, to filter out competitors without running the risk of Do Not Email being unchecked, there are ways to achieve this:

Do Not Email: A Future Solution?

While this would protect Do Not Email solving the issue at hand, I can imagine it would make record updates revert unless the sync behavior be made intelligent to revert back to the “Use the most recently updated record” behavior once the change containing the Do Not Email field change has been fully synced. Don’t worry, I’m starting to get a headache, too.

Note: The idea was posted before the 2021 and Winter ‘23 updates were announced, which is why it references Opted Out rather than Do Not Email, where the focus of the conversation has now turned towards.

While we’ve straightened out how the two fields are meant to be used, a challenge still exists: prospects don’t have visibility into the Do Not Email field.

When they opt in/re-opt in, prospects are basing their subscription status on the Opted Out field – after all, why would they consider there could be another field (Do Not Email) that’s preventing their opt in?

If the Opted Out field is false, yet the Do Not Email field (that your organization controls) is true, this can be unintentionally misleading – essentially a fake opt-in. Both Opted Out and Do Not Email have to be false to allow a prospect to receive emails.

The last thing you would want is for prospects having to contact your organization directly to be fully resubscribed.

There are workarounds for this. Bill Fetter, marketing automation genius, came up with a solution to handle fake opt ins by adding additional completion actions on the forms you are allowing prospects to resubscribe through.

Or, Just Keep Opted Out Behavior the Same?

Some marketing admins are opposing the change due to the disruption it will cause, requiring a change in how their organization currently operates. Sure, there are probably workarounds out there – but combined with the time and effort to re-train users, it’s not an appealing outlook.

We already featured one community-sourced solution from the IdeaExchange, and here is another: Leave the “Use the Most Recently Updated Record” sync behavior for the Opted Out field.

The alternative suggestion is to add audit tools for admins to monitor how, when, and why the field was updated.

Organizations are already fearing the custom workaround they may need to put in place, such as a custom field for syncing Email Opt Out, in order to take advantage of “Use the most recently updated record”. This, as you can imagine, comes with its own set of considerations such as connector sync speed, ensuring both fields are taken into account before sending emails, and the list goes on. Workarounds like this will ultimately cause technical debt (so, don’t rush into anything too quickly without seriously considering the trade-offs).

One update that was announced as part of the Winter ‘23 release caught your attention and raised red flags for some marketing admins. The “Control Prospect Opt-out Field Sync Behavior” change isn’t effective until February 26, 2023* (but is enabled in new Pardot accounts, starting Winter ‘23, the current release).

To wrap up, this is what we’ve covered:

You may choose to wait and see if there are changes to the proposed update (I wouldn’t count on it). There are reasons for the change, and I believe that this is another stage of Pardot tweaking mailability fields for the better. However, this has grated on marketing admins who have been using Pardot for a long time – the potential ramifications to data, preparing to re-train Salesforce users in sales/service teams to use the Do Not Email field, mapping (or potentially unmapping) the Do Not Email field between Pardot and Salesforce.

I won’t lie, this article was challenging to write. Getting to the bottom of why these changes have been proposed, and the ramifications for so many different organizations felt like peeling a never-ending onion, each layer revealing something new.

Thanks to Katherine West, Bill Fetter, Rodney Bell, and others for sharing your thoughts with the Trailblazer community.