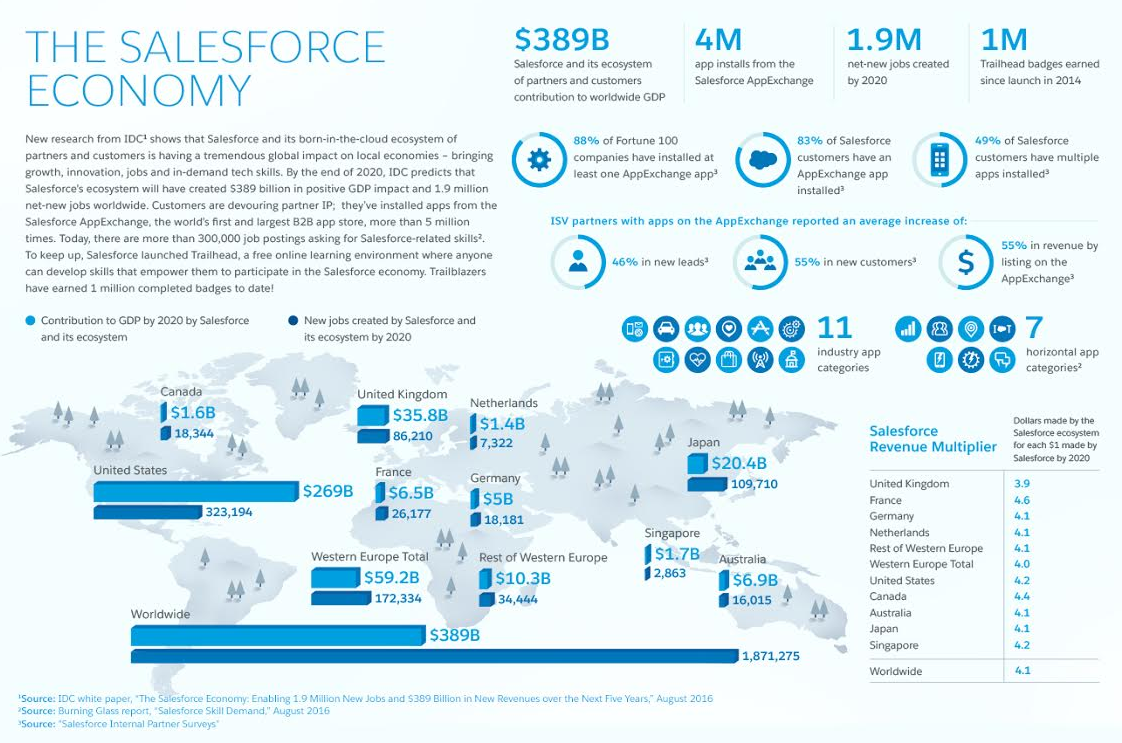 Lee is a freelance journalist working in London

New research released in a report from the IDC examines and explains how Salesforce, along with its partner and customer ecosystems, are projected to drive the production of close to 1.9 million new direct jobs and generate over $349 billion in new GDP globally over the next four years.  The study also projects that the Salesforce ecosystems will enable the creation of nearly 2.8 million indirect jobs over the same period.

The Salesforce ecosystem’s revenue is currently somewhere between three and four times larger than Salesforce itself.   In 2015 the ecosystem made $2.82 for every dollar that Salesforce made.  The IDC report suggests this ecosystem will continue to grow through the production of additional software applications, managed services, and accompanying products even more quickly than Salesforce over the next four years.  The report projects that by 2020, every dollar Salesforce generates will result in a company ecosystem gain of $4.14.

Another positive implication for the Salesforce ecosystem that is addressed in the report deals with the projected increase in spending on cloud computing software over the next four years.   According to the report, spending on cloud computing software is projected to increase at six times the rate of overall IT spending from 2015 through to 2020.   The report states that cloud computing services will continue to gain ground over traditional IT as the latter’s on going maintenance and upgrade requirements (that currently consume 71% of all IT spending) make them significantly less cost effective solutions for customers.

The report also asserts that cloud computing, once viewed as a potential threat to partner profitability and jobs, is in fact a driving force and strong support system for new business models and business innovations across numerous industries.  The study states that cloud computing’s role in job generation can be linked to its ability to increase IT innovation.  Increased IT innovation is credited with accelerating development schedules, enabling shorter time to market schedules for new products and lowering overall operational costs for customers.