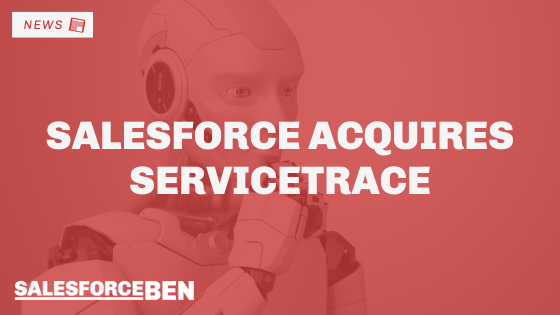 Today, Salesforce has announced they will be acquiring Servicetrace for an undisclosed amount. The german-based Robotic Process Automation (RPA) company will be absorbed into Mulesoft.

This is the first acquisition Salesforce has made since the Slack mega-deal back in December 2020. Both Slack and Servicetrace are both completely new types of products for Salesforce, giving us an idea of how they see the cloud space developing over the next few years.

What is Robotic Process Automation (RPA)?

Robotic Process Automation is big business, and over the past few years, this sector has attracted huge amounts of investment. Only a few months ago, UIPath, one of the biggest players in the space, IPO’d and raised $1.34 billion in the process.

RPA differs from say, CRM automation, as it is used to emulate humans. RPA software is designed to interact with a system the same way a human would, but automating high-volume, repetitive tasks.

RPA exists where integration might not be possible. For example, you might be integrating two systems that do not have available API’s (Such as legacy terminals). Or performing a task where integration won’t work, like copying information from an invoice into a spreadsheet.

Here is another great example using a customer onboarding process by one of the biggest players in the space, Automation Anywhere.

Mulesoft was acquired by Salesforce in 2018 for $6.5B. The platform was designed to support businesses going through their digital transformation, to connect disparate systems. The acquisition allowed Salesforce to offer their customers a solution to one of the biggest pain points surrounding cloud implementations.

One of the most important selling points of Mulesoft is the fact it’s a low code platform. Using templates, connectors, and the Mulesoft Flow Designer, companies can get up and running with a scalable integration in no time at all. Salesforce has doubled down on this philosophy by releasing Mulesoft Composer, an integration tool for Salesforce aimed at Admins.

Robotic Process Automation solutions are also designed to be low/no-code, allowing companies to automate manual, high-volume tasks with minimal implementation cost. An RPA layer on top of Mulesoft gives Salesforce customers the ability to bring even more relevant data into Salesforce. This helps businesses reach the goal of having a complete, 360-degree view of their customers.