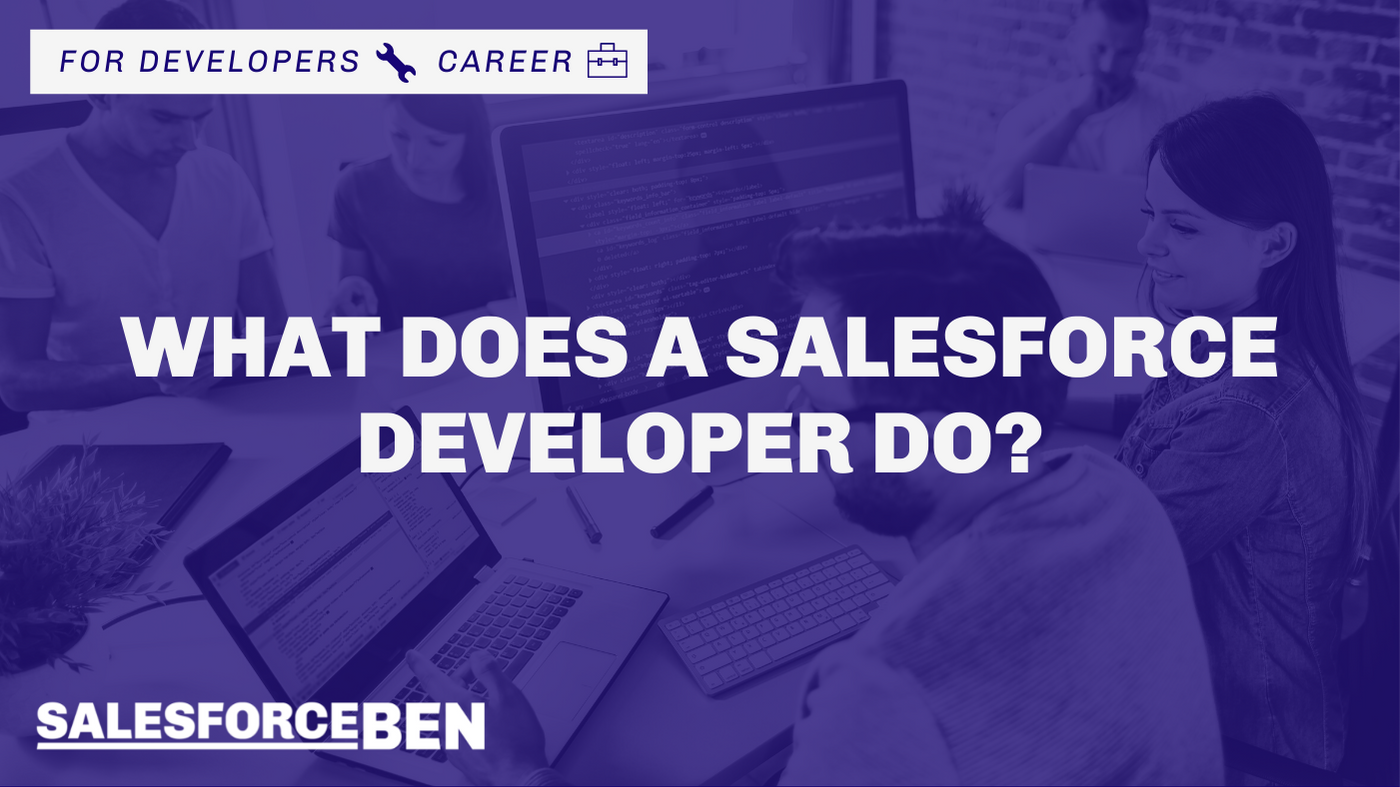 The responsibilities of a Salesforce Developer can range from typical code-based tasks, through to work that requires architectural concerns (understanding the wider context of what their code is for).

What Does a Salesforce Developer Do? Let’s start by outlining what we mean by ‘entry-level’, ‘mid-level’, and ‘senior’ developers. Years of experience is not the be-all end-all indicator. Developer career progression focused more on skill set rather than experience. In the list below, take the years as a suggestion:

“The points at which someone moves on from being a junior developer to a mid-level or to a senior, are often removed from “years”, and instead are based on experience. Many people who would consider themselves senior developers (years on the job) have been stuck at the junior level for years, not progressing. Growing to have the knowledge, thinking in these ways, then you will progress through the development career path”

Why is Java important? If you know Java, you will be able to grasp Apex faster. Plus, you’ll be able to adapt to Salesforce’s development framework, Lightning web components (LWC), very easily.

What Entry-level Salesforce Developers do:

As a junior Salesforce Developer, you’ll be writing code based on specific requirements. You’ll be continually guided by the more experienced Salesforce developers in your team.

Mindset – the way you think, act, and reflect – is key. Not having the right mindset will hold you back from progressing in your Salesforce developer career.

Before we move on, let’s introduce these two concepts that are key to progressing as a Salesforce developer:

If you were to give a task to an entry level developer, e.g. to build a screen page component, they would create two very large (hundreds of lines of code) for that one screen.

A mid-level developer, on the other hand, should be breaking that down into sections. You’ll still end up with one component but that component is made up of (e.g. five) smaller components which each have a function.

Start considering how your code is going to be used in the wider scheme. Take advantage of design patterns and programming techniques, and have the thought process to make code modular and potentially reusable when building. Invocable actions are an example of composition (which we’ll cover in this guide).

Involves breaking code down into smaller parts, that each address an individual function.

Example: You needed to change a search panel on the left-hand side of a page. With proper code design, you would just go and change that component. It will continue to give an output to the other page components that don’t care what changes have been made – they’re just expecting output.

The benefits of encapsulation, i.e. having smaller code blocks, components or modules are:

Progress to a Mid-level Salesforce Developer

Move from Entry to Mid-level Developer

What Senior Salesforce Developers do:

Here comes the question: Do you want to progress your career in a technical domain, or oversee a development team?

Senior developer is the final step before one can “split off” into other domains e.g. the architect route. Some people may split off earlier than senior developer status.

READ MORE: Become a Lead Salesforce Developer – Which Skills Do You Need?
READ MORE: Guide to 5 Types of Salesforce Architects

As a senior Salesforce Developer, you’ll take ownership of all programmatic requests for your organization. In most organizations, you will have the opportunity to mentor a team of developers (or build a team).

However, it’s not only coding prowess that will get you here. There’s a special awareness, beyond yourself, that will be required:

The ability to make code modular, repeatable, maintainable is when developers go “up” a level. Let’s take an example: A header bar on a record page.

Can You Accelerate Your Developer Career?

“Absolutely – with the right team, the right environment, some people go from being a junior to a mid-level in a year. On the other hand, in a bad environment they may never progress.”

Now you know more about what it takes to climb the ladder, let’s finish up with a typical Salesforce Developer career path:

Previous Post: State of Salesforce DevOps 2023: Have Your Say
Next Post: Pardot Read Rate: Are Prospects Spending Time on Your Emails?