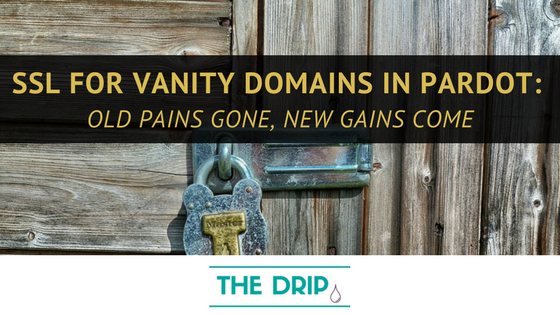 Mid-week, Pardot announced that users will now be able to secure their web pages with SSL. SSL is a layer of security, providing information encryption over the internet. With an SSL certificate on website pages, it proves that your website is water-tight to data security breaches. It’s an anticipated update, as trust is a core characteristic in the B2B Marketing world.

SSL sticks https:// to the front of your URLs*. If you take a look at major websites, you’ll no doubt see this:

This post will cover the old pains, and the new gains – by contrasting the before and after, I want to prove that this is an update you should be pleased about. With the extra information you’ll find, I hope that web security will be put on your radars.

That little green padlock and ‘Secure’ label is a huge vote of confidence, particularly on web pages/landing pages containing forms, where Prospects are expected to submit personal data.

Using Vanity URLs are crucial for brand consistency. Vanity URLs are rewritten links of Pardot-hosted marketing assets to appear as your own. The Pardot subdomain (go.pardot.com) is automatically used if no Tracker Domain was verified, which is out-of-the-box and has been SSL-protected for some time. So, you can see the toss-up Pardot users needed to make previously, between branding consistency, or security.

If you attempted to add a Pardot URL that was a Vanity URL (eg. www2.company.com) on to a https:// page, it was likely to throw an error. Then followed the added hassle of re-writing the Vanity URLs back to the automatically generated go.pardot.com format. The alternative? Embedding Pardot forms via iframes, which often take persistence and patience to get right.

Since mid-October 2017, http:// pages began to be flagged as “Not Secure” on the Google Chrome browser interface (in alarming red text). Remember Chrome holds 47% of market share, so there would be a lot of eyeballs on that. Not only that, major Search Engines were handicapping non-SSL domains, which will eventually negatively impact your SEO efforts.

Now, that’s a thing of the past. Gloomy part done. Here are the new gains.

As I’ve already covered, Vanity URLs on your marketing assets will be SSL-enabled, meaning the best of both: branding consistency and retaining Prospect trust.

Not only that, but Pardot will set up and host the SSL certificate on customers’ behalf, leveraging the services of open source Certificate Authority ‘Let’s Encrypt’. It’s known for being the least risky and least prone to friction in passing certificates on to end customers. There is no extra cost, essentially making your SSL certificate requests limitless.

Now, whenever you create new a marketing asset that uses a Vanity URL, it will be automatically SSL-enabled (https://…) – nice gain!

That little green padlock and ‘Secure’ label is a huge vote of confidence, particularly where Prospects are expected to submit personal data. Luckily, from 1st February onwards, Pardot customers will benefit from SSL-enabled Vanity URLs automatically, resulting in branding consistency and retaining Prospect trust. The pains of re-writing Vanity URLs back to the go.pardot.com format will be a thing of the past; plus running the risk of being penalised in search engine rankings is soon dismissed. No doubt, a welcome update for all Pardot users!