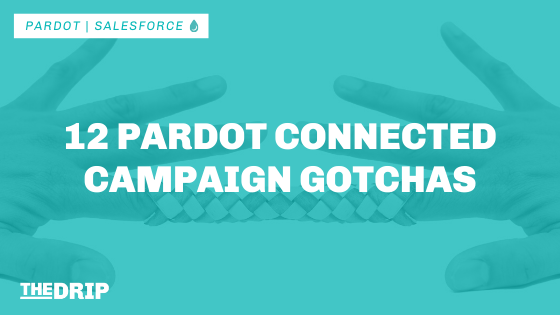 It is this upfront setup, if not followed correctly, that can cause user confusion, frustration, and extra work for Admins – also known as ‘gotchas’.

Here are common ‘gotchas’ you should be aware of when enabling Connected Campaigns – the technical gotchas, administration, and the unwanted surprises that can crop up for everyday users.

You didn’t dedupe or declutter Campaigns before starting.

Delete out duplicate, dummy, or legacy Campaigns from Pardot and Salesforce before attempting any of the setup steps. It will make your life a lot easier, only working with those Campaigns you want to keep during the connection process. Ask your team how many there are, and what actions should you do with each.

You didn’t set up Campaign record types before enabling the sync.

You can define which Salesforce Campaigns sync to Pardot by using record types. This is the way you can restrict certain campaigns from syncing – or face the consequences of every campaign in your Salesforce org syncing!

If you’re new to record types, make sure you read up carefully on this advanced Admin topic first! I find that having record types called ‘legacy’ and ‘connected’ are sufficient.

You forgot to connect your Pardot-only campaigns.

A key step is to create Salesforce Campaigns as counterparts for any Pardot-only campaigns in Salesforce before completing the setup. If you are using the Pardot Lightning app, you may not be able to filter by ‘Unconnected Campaigns’; in this case, switch back to Pardot Classic to grab them, and connect them (a one-time only task).

You didn’t realise there would be extra storage required.

What did you just say?! Yes, when you enable Connected Campaigns, “Salesforce copies…marketing links, and list emails from Pardot campaigns to their connected Salesforce campaigns”. This is also known as Marketing Asset Sync.

These contribute towards data limits – and storage is not cheap in Salesforce! Ensure your Admin acknowledges the spike in storage that will be required.

When campaigns are connected, Salesforce becomes the master campaign, which means its field values are taken as the source of truth. During the connection process, if there is a difference between Salesforce campaign field values and those on the Pardot campaign side, Salesforce wipes the Pardot values, and replaces those fields with the Salesforce value. This is irreversible!

The following fields are potentially at risk if the values between the two systems do not match up:

Ensure you compare the field values to spot any discrepancies between Salesforce and Pardot – or export the Pardot campaign data into a CSV file for safe-keeping, at the very least!

You have skewed reporting because the training session was a free-for-all.

Do yourself a favour, and set up Training Campaigns for your users to practice with when you are training them. Having a campaign dedicated to training will help prevent users associating assets and prospects to real campaigns, and therefore skewing the Engagement Metrics found on the Salesforce Campaign Engagement Metrics component.

You forgot editing campaigns can only happen in Salesforce now.

When Pardot campaigns are ‘connected’, they are read-only – in other words, you can no longer edit fields. This must be done from the Salesforce campaign side.

You forgot creating campaigns can only happen in Salesforce now.

“Where’s the Add Campaign button gone?” This has to be one of the most common questions asked on the Trailblazer Community! When Connected Campaigns are enabled, ‘Add Campaign’ is no longer visible in Pardot; you must create campaigns from the Salesforce side, and wait for them to sync.

You’re waiting for your campaign to sync down from Pardot to Salesforce.

While on the theme of sync, let’s talk about sync troubleshooting. If your campaigns don’t appear in Pardot (after creating them in Salesforce), there are two things you should do:

You associated marketing assets to the wrong campaign – then sent the email.

Marketing assets, such as emails and forms, are associated to Connected Campaigns. Be aware that you can’t change associated campaign for a list email once it goes out – hence why I use the word ’sticky’.

You are waiting in vain for Prospects to magically sync to Salesforce Campaigns.

Campaign alignment has come a long way! Not everything to do with campaigns are connected, yet.

You are still waiting in vain for Prospects to magically sync to Salesforce Campaigns.

The final ‘gotcha’ is also related to campaign attribution, following on nicely from the previous point. Read up on Campaign Member Sync, a separate feature that can be enabled to sync a Prospect to a Salesforce Campaign automatically. There’s a misconception with this feature, as Prospects will be automatically created as Campaign Members for their first-touch only!

Read up: Salesforce Campaign Member Sync for Pardot Prospects: What It Can and Can’t Do

I thought a checklist would be useful to summarise these 12 ‘gotchas’, so you avoid falling into these common traps: