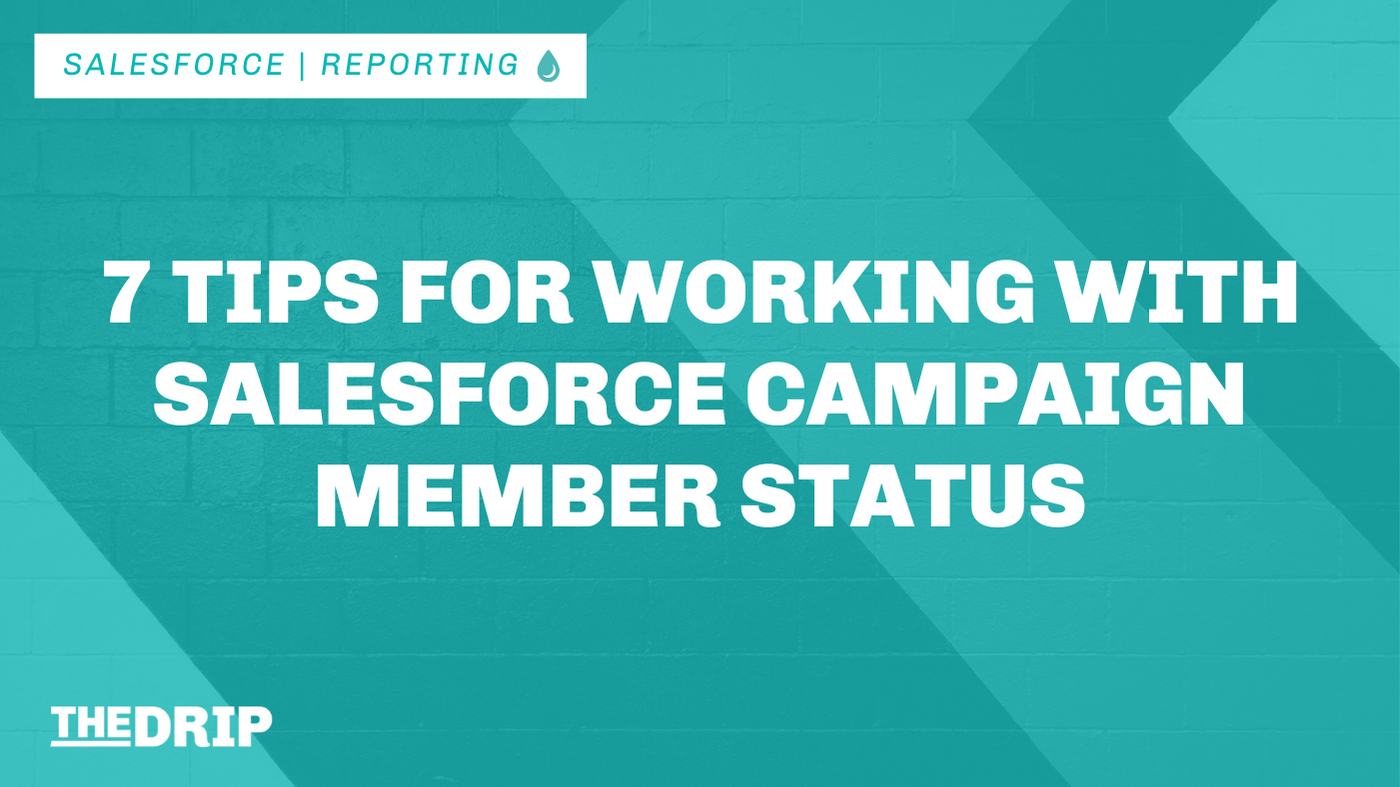 All Campaign Members in Salesforce have a “status” which describes the level of engagement the individual has had with the Campaign. Campaign Member Status examples include “Sent,” “Responded,” and any other statuses you wish to add to suit your marketing campaign.

Campaign Member is an object in Salesforce. When a Lead, Contact, or Person Account is added to a Salesforce Campaign, a new record is generated to represent that they are part of that Campaign.

Following best practices for managing Campaign Member Status in Salesforce can save you a ton of headaches down the line – plus help you work towards clean reporting.
Note: this guide is referring to Campaign Member Status, not to be confused with the ‘Status’ field on the Campaign that indicates whether a Campaign is “planned,” “in progress,” “completed,” etc.

Note: this guide is referring to Campaign Member Status, not to be confused with the ‘Status’ field on the Campaign that indicates whether a Campaign is “planned,” “in progress,” “completed,” etc.

An alternative way to look at this concept: the Campaign Member Status field is a picklist field with set values, where only one can be selected for each member.

Planning your campaign statuses is important to take this relationship into account. Campaign Member Statuses be linear, following a logical progression as a prospect engages with the Campaign: eg. Sent, Opened, Clicked, Converted. 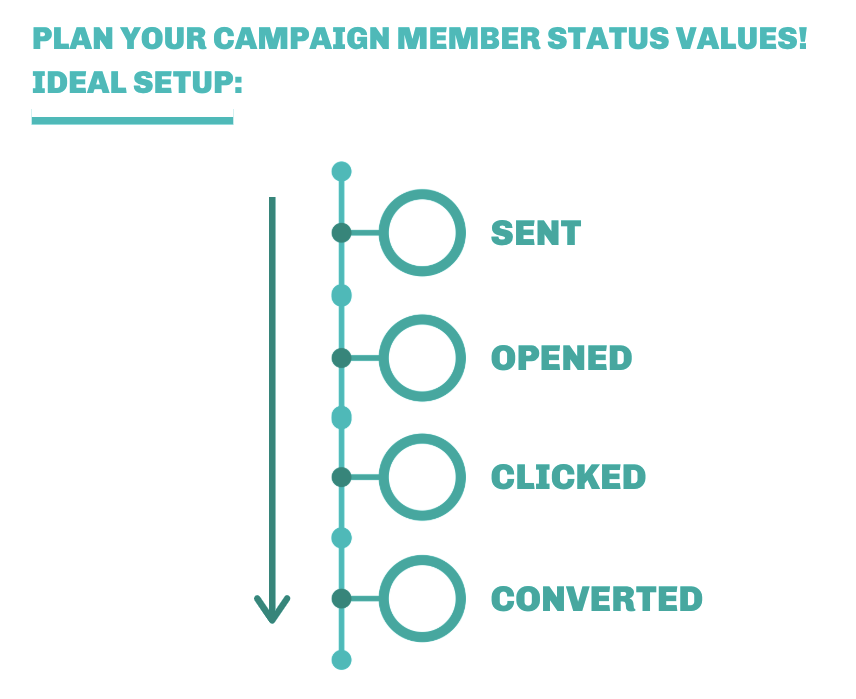 Having multiple marketing tactics pointing to one Salesforce Campaign isn’t advisable, which is why parent/child Campaigns and the Campaign hierarchy exists.

Let’s take an example. Say there are two emails (email A and email B), and the marketer is using the same Salesforce Campaign to record the engagement. One prospect may open, and click in email A – their Campaign Member Status would update like this Sent → Opened → Clicked. However, if they only open email B, then their status will backtrack to “Opened.” As a result, they would lose visibility into email A’s engagement – their Campaign Member Status would have updated Sent → Opened → Clicked → Opened.

In short, statuses need to be logical and linear. 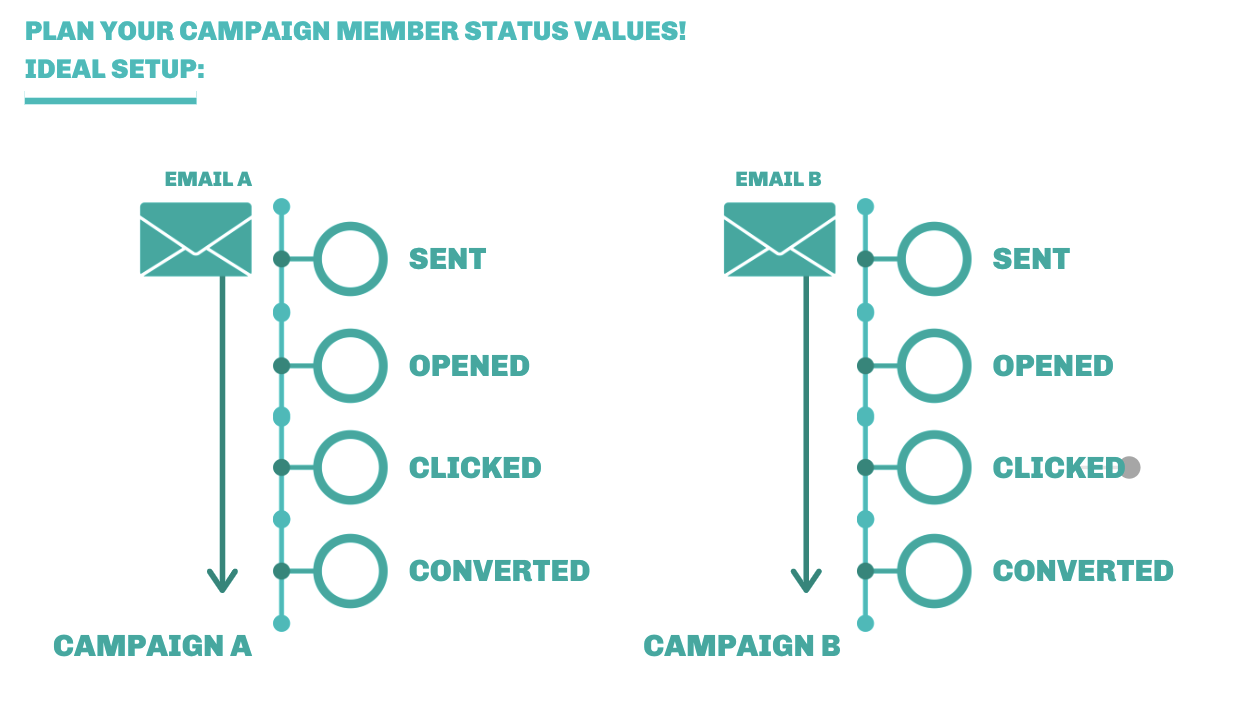 2. Which Objects Can Have a Campaign Member Status?

Records from three objects can be added as Campaign Members in Salesforce: Leads, Contacts, and Person Accounts.

When associated with a Campaign, their Campaign Member record will have a status.

Each Salesforce Campaign can have its own, unique set of Campaign Member Statuses; while your Campaigns will mostly use the same Member Statuses, it’s worth checking before you launch your marketing campaign to avoid system errors, or reporting headaches down the line.

Note: If you are a Pardot customer (AKA. Marketing Cloud Account Engagement), do check Campaign Member Statuses before you create marketing assets that include completion actions “Change Campaign Member Status to.” At that stage in creating the asset it will be frustrating to go back into Salesforce, amend the status values, and wait for the Connected Campaign sync to process again. 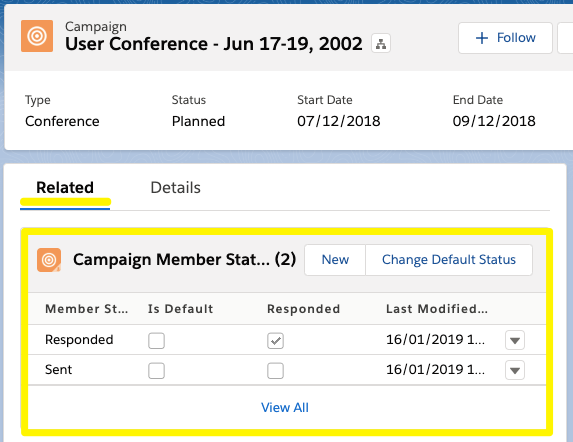 You may be wondering: where is the Campaign Member Statuses related list? If you’ve looked in all the subtabs on the record and still can’t locate it then your Salesforce Admin will need to add the list to the page layout.

1. Go to Setup → Object Manager. Find or search for ‘Campaign’ → Find ‘Page Layouts’ in the sidebar → click to edit the ‘Campaign Layout’.

2. Scroll down the list to find “Related Lists.” Drag the “Campaign Member Status” related list onto the page. Then save.

You can use or modify these, or create additional ones to suit your campaign needs.
To edit an existing status, use the dropdown arrow and click on the Edit option:

How do you create a Campaign Member Status in Salesforce? Click the New button, highlighted in the image below (providing you’ve checked the related list, tip #3, is in place).

5. Mark a Status as “Responded”

Let’s next look at why statuses can be categorized as “Responded.”

Look at the Campaign Member Status related list and you will see there is a column called “Responded.” A “Responded” status is valuable interaction the prospect made with the campaign. For example, attending a webinar is more valuable than only registering.

In the list, a checkbox categorizes whether a status is considered a responded status, or not: 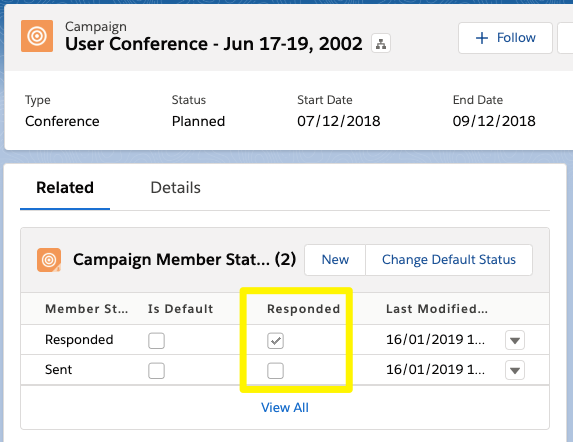 Eventually, the Campaigns where members have ‘responded’ statuses would be considered influential towards an opportunity because this was a quality interaction.

Any status can be classified as a ‘Responded’ status, which is useful if you are modifying or creating your own Campaign Member Statuses.

When creating a new Campaign by cloning an existing Campaign, you may expect the new Campaign will have the same Campaign Member Statuses as the original Campaign. That’s not always the case – be careful which action (button) you use:

While being able to copy statuses across using the “Clone with Related” button is a productivity boost, the risk of inconsistent naming being carried across, still exists. That’s why you could create template Campaign types, containing your preferred status values, that everyone in your team can copy. This retains a source of truth for how Campaign Member Statuses should be used across your organization (thank you Nicole Gioe for the tip!)

Do you consider this a pain point? Clearly, you’re not alone; the IdeaExchange Idea has received 24k+ “points” (somewhat like votes) since being posted in 2007 (the hundreds of comments prove that there are many others who are vocal about this!)

We already touched on the risk that comes with inconsistent statuses being carried across when teams clone Campaigns that have rogue Campaign Member Statuses.

While documentation is no one’s favorite task, it’s necessary when your aim is to maintain a set of Campaign Member Statuses within your team – after all, no one likes to mess around with campaign admin, they would rather have set out steps, that are easy to follow, enabling them to focus on their work (actually marketing!)

Communicate the template Campaign types you have created, that contain your preferred status values. This is so everyone in your team can copy them without “going rogue.”

When your team creates or clones Campaigns, there are other reasons why templating/documenting/guiding are so important:

All this best practice is leading up to having cleaner Campaign reporting.

Reminder: This guide is referring to Campaign Member Status, not to be confused with the ‘Status’ field on the Campaign that indicates whether a Campaign is “planned,” “in progress,” “completed,” etc.

With Salesforce Reports, there are four Campaign report types you can use out-of-the-box:

In the Lightning report builder, add the “Member Status” field to show a breakdown of members and their statuses in one (or more) Campaigns. 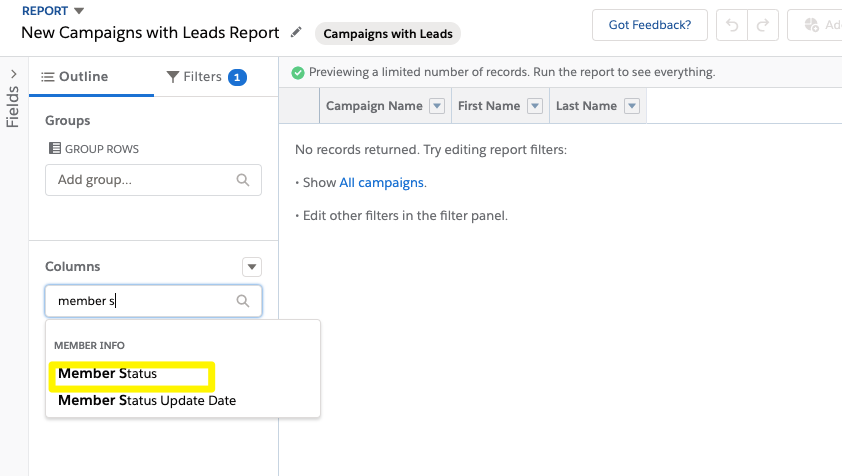 Take some time to try out these types of Campaign reports; you won’t know how much you can slice and dice your data, within your org, completely free, until you do.

All Campaign Members in Salesforce have a “status” that describes the level of engagement the individual has had with the Campaign – but working with this field effectively isn’t so straightforward!

With planning status values, understanding how “responded” statuses work, and ensuring the correct values are carried over from one Campaign to the next (when cloning) then you’ll save yourself a ton of headaches down the line.