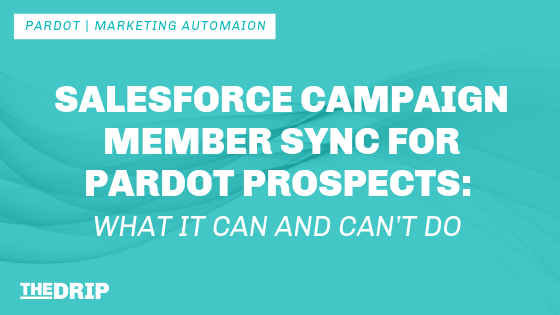 We presented the new Winter ’19 features at the London Pardot user group while the release notes were hot off the press; I remember we proceeded with some caution over what information we were presenting, and what was yet to be confirmed.

Luckily, this post covers clears up that ambiguity. Here you will find what you need to know about the ‘Campaign Member Sync’ feature – how it works, its advantages, and its current limitations.

The Sync is One-Way

I think the majority of readers are well-versed on the differences between Pardot and Salesforce campaigns – but it’s worth recapping if you’re a little rusty.

First of all, you must have Connected Campaigns enabled. Then you can enable ‘Member Sync’ in your Pardot Account settings.

The ideal Campaign Member Sync flow goes like this:

Seems neat? It’s not always that simple. Often data is added from Salesforce, or marketing assets in Pardot have the incorrect campaign associated to them. These are just a couple of examples!

Connected Campaigns are not Enough!

Remember: a Pardot Campaign is not the same as a Pardot list, which are what marketers use in Pardot to collect and segment Prospects for use in marketing campaigns.

In short, if you add a Lead / Contact to a Salesforce Campaign, in Pardot you will see the Campaign, but the Prospect record will not be part of it.

Member Sync beyond the First Touch

However, pushing prospects from Pardot into Salesforce Campaigns beyond the first touch is a challenge that remains.

The automatic Campaign Member sync won’t kick in because you will not be adding the Prospect to the Pardot Campaign. The prospect will already be part of 1 Pardot campaign – their source campaign.

To add Pardot Prospects as Salesforce Campaign Members, you will need the support of Pardot automation. Completion actions and Automation Rules do the trick. Here’s an example:

I lured you into reading this post, with a title that promised you’ll find what Salesforce Campaign Member Sync can and can’t do – it’s the perfect takeaway.

This is certainly a feature Pardot admins should consider enabling, a step in the right direction for the Salesforce-Pardot integration. However, my advise is maintain your expectations, and ensure you are using Pardot Connected Campaigns properly to not skew reporting, or spend your time troubleshooting something that isn’t actually broken!

13 thoughts on “Salesforce Campaign Member Sync for Pardot Prospects: What It Can and Can’t Do”