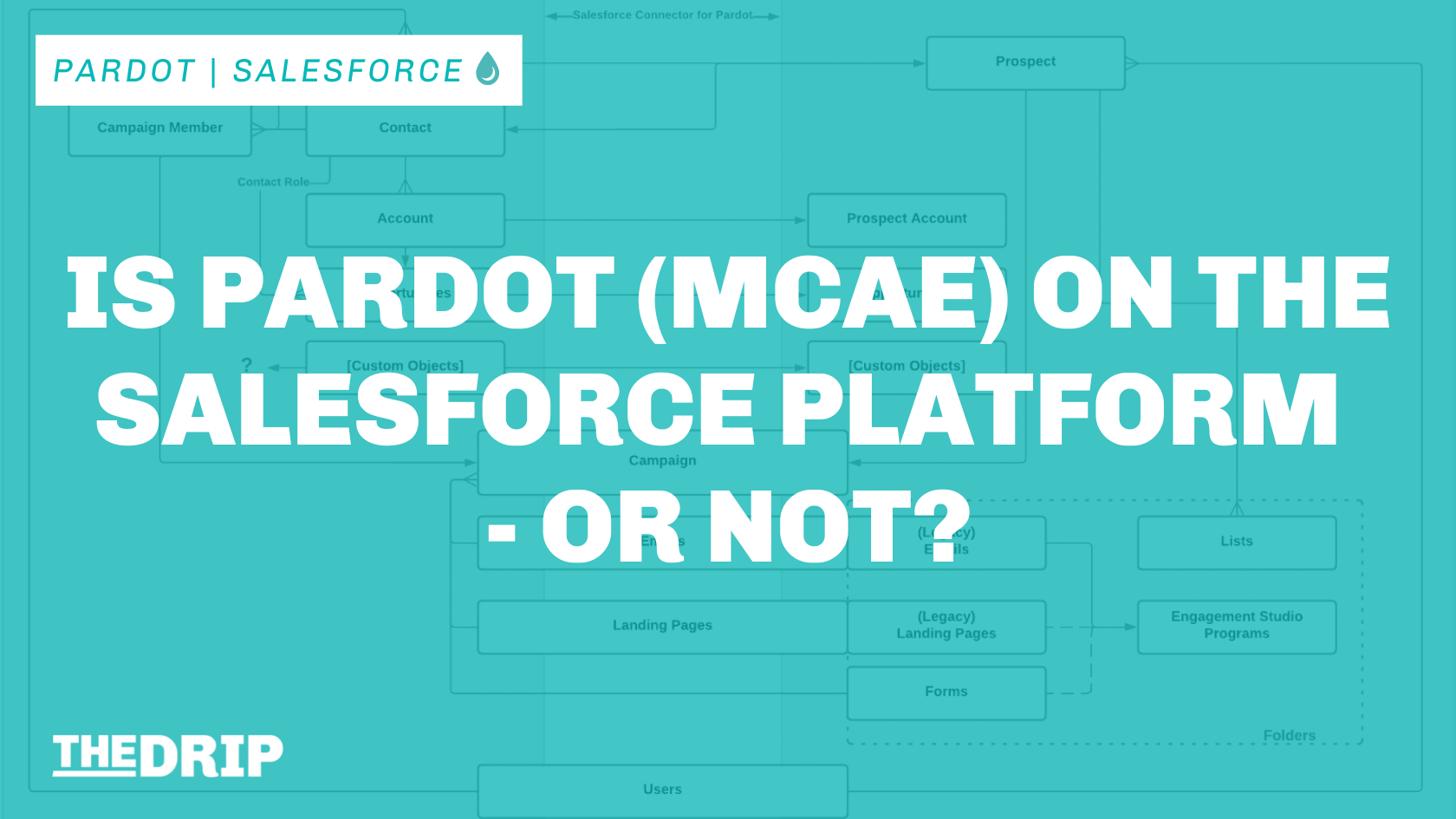 By the “core” Salesforce platform, we’re referring to the infrastructure that Sales Cloud, Service Cloud, etc. is built on. The “Lightning” platform is the foundation for organizations to build their own apps. Just like adding building blocks to lego, you can extend your Salesforce org using pre-built blocks or create your own. This is known as “extensibility” and being able to leverage all the platform offers. Looping Pardot into the bigger picture (platform automation, apps) is the main driver for Pardot to move onto the core platform.

Why has Pardot been standalone in the past? The answer is that Pardot was a product Salesforce acquired in 2013. Pardot has always been integrated with Salesforce using the connector. Shortly after the acquisition, Salesforce retired Pardot connectors to all other CRMs, in order to double down on the Salesforce-Pardot connector.

The long-term vision is to not even have a connector. Instead, the aim is to have all Pardot functionality housed on the core Salesforce platform. After all, the connector has its limitations, and often specialists have to troubleshoot it on a daily basis.

So, how much of Pardot has moved on to the Salesforce platform? How far do we have to go – and what are the hurdles the engineering team could encounter?

Pardot Moving “On Platform” – The Challenges

Moving Pardot has been a challenging venture for a number of reasons. You could think of it as mashing together two infrastructures, each with its own:

Understanding Pardot’s architecture will help paint the picture. Think of the data model/product architecture as the foundations of a building that you, as a customer, use to build up your database.

The diagram below shows the objects involved in powering Pardot. There are some that are on the Salesforce side (blue patch) and some on the Pardot side (purple patch).

To further explain the mass of objects surrounded by the “folders” box, Email/Landing Page records can be created on either side, depending on which builder you are using (i.e. the “classic” builders vs Lightning builders). Forms are still created on the classic builder.

All of these marketing assets (Email/Landing Page/Forms) are related to Salesforce Campaigns, and are therefore visible from the Campaign record page. This is thanks to the Asset Sync Queue between Pardot and Salesforce, via the connector.

READ MORE: What is the Asset Sync Queue in Pardot?

Note: The diagram is not a perfect representation. There are other data relationships that I’ve chosen not to add, such as Users to Accounts and Opportunities.

I’ve stripped out some of the objects in order to show how activities and reporting works between the two platforms.

The activities that prospects generate when interacting with your marketing assets are also aligned. While these are stored in Pardot and called “prospect activities” in Pardot, they appear on the associated Lead/Contact record as “Engagement History”.

Reporting options are explained in the summary.

Why is Object Alignment So Important?

In basic terms, using the same objects on both sides will:

We’ve covered the objects involved (the building blocks of your database), now there are the different types of automation. Automation enables data to be updated and/or transferred between records, objects, and integrated systems – plus other actions, such as sending email alerts, etc.

There is no shared automation across Pardot and Salesforce. You can, however, use one type of automation to tap into another automation, for example, a field update that a Pardot Automation Rule makes, after syncing to the Salesforce record, could trigger a Salesforce Flow to run.

Pardot data syncs with Salesforce to keep the data between Pardot prospect records and their associated Lead/Contact record aligned. To enable the connector to send the right data to the right destination, you’re required to map fields between the two systems.

In most cases, the field types between both Pardot and Salesforce marry-up fine, even if they have different names (e.g. “picklist” vs “dropdown”). There are other field types that don’t function in the same way:

Chances are that you are using the Pardot Lightning App within Salesforce. This was a huge step in gluing together Salesforce and Pardot – removing the need for users to switch between different apps, get accustomed to different navigation, and also alleviated a few bugs.

While it looks like everything Pardot is on the Salesforce Lightning platform, the connector is still required to communicate with the Pardot infrastructure for those objects and functionality not on the Salesforce platform.

When Pardot updated its user authentication (login) policies, the ability to create Pardot-only users was disabled, and the Pardot Classic app (https://pi.pardot.com/) is scheduled for retirement in all Salesforce orgs by October 17, 2022.

As you can imagine, the codebase (i.e. the body of source code the entire application is developed on) is between the two platforms.

When it comes to this aspect, there are really only a few aspects you, as a Pardot admin/developer/user, would interact with – the rest is hidden and only accessible to the Pardot/Salesforce engineering teams.

What’s on the Salesforce Platform – And What’s Left?

Let’s start to summarize all this background information into something more digestible. While this may not be a complete list of “what’s on” and “what’s not”, I hope it enhances your understanding of Pardot (Marketing Cloud Account Engagement) while it’s partway through the long migration journey.

The following features and functionality have been migrated or aligned with the core Salesforce platform: