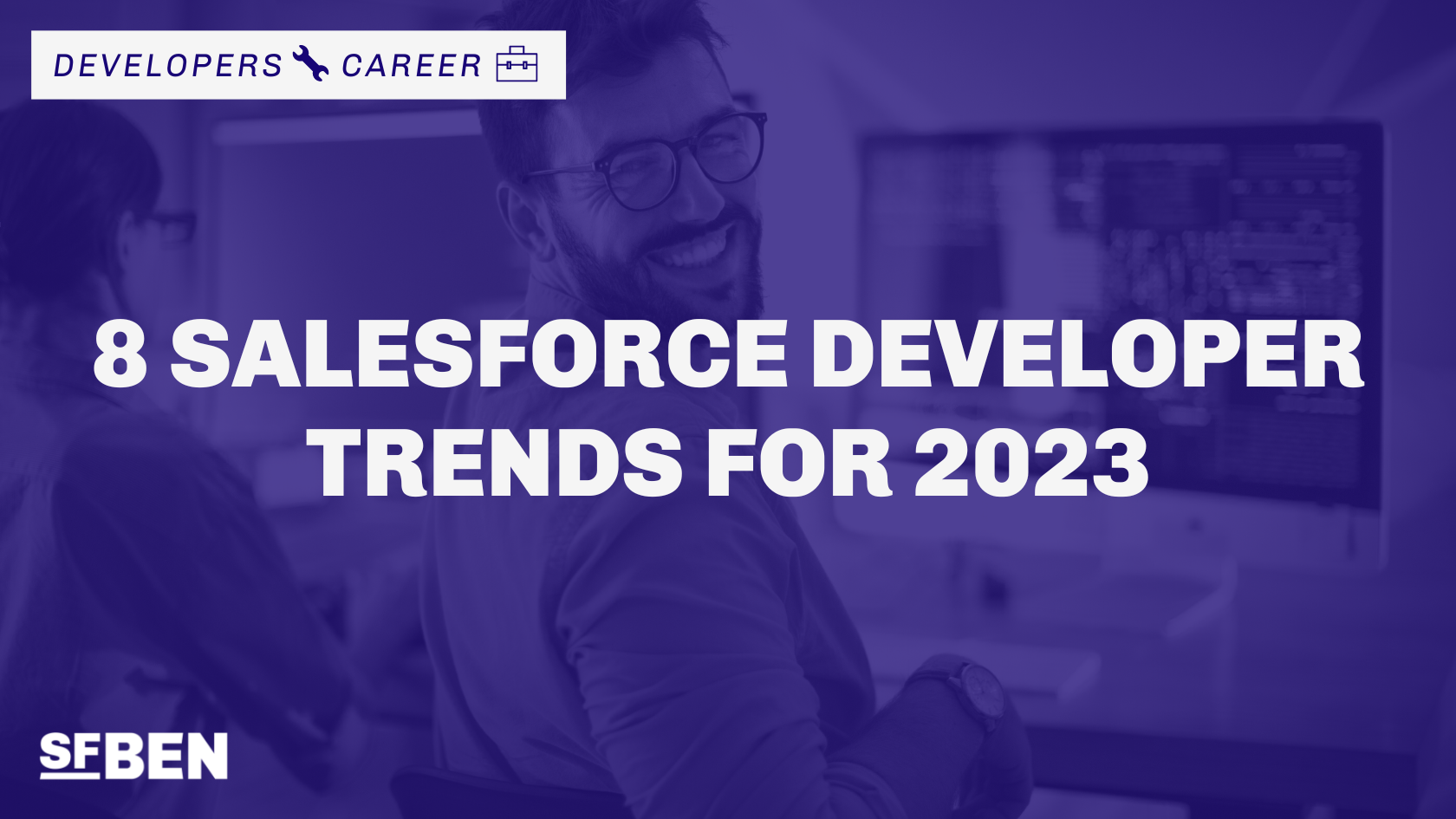 Salesforce is constantly striving to make their developer experience better each year. We’re seeing more flexibility in the programming languages you can use, including bringing industry-standard languages ‘closer’ to the platform, and how developers can ‘step up’ and be a multiplier for the rest of the Salesforce team in their organization. These enforce the good developer mindset.

For Salesforce Developers, 2023 will be the most critical year to jump onto the new technologies – or get left behind. Here are our picks from the pack.

1. GraphQL on the Salesforce Platform

GraphQL is an industry-standard query language for APIs. A single endpoint for all available resources exists, and data can be aggregated across multiple resources.

Look, I won’t pretend to know everything about GraphQL, but I see similarities between GraphQL and Platform Events – both ask for exactly what’s needed (and nothing more), which prevents over-fetching (and under-fetching). Overall, app performance is improved.

Graphical is a popular IDE for GraphQL. At Dreamforce ‘22, we saw how we can:

Example: A profile page in an app that displays customer engagement. Using the REST API, the integration would need to call a different endpoint for each resource, requiring multiple rounds for the server to render the profile page with data and metadata. This would clearly be slower, especially poor performance on mobile. With GraphQL, you call one endpoint in one round to the server.

The response schema resembles the request schema, so we can describe in our query how we want the results to look.

LWCs are seriously becoming the “big thing”, especially for front end development. Since LWCs came out, it has been made explicit that Aura components are approaching their end of life. Salesforce has only maintained VF/Aura for backwards compatibility reasons.

You may have been able to get by the last two years without it, but continue, and your career will “hit a wall”. Get enabled on LWCs while you have the opportunity to learn without potentially having your job on the line (push rather than shove).

Lightning Web Security bought an improved implementation of all the security features that were in Locker Service, but with key differences. Todd Halfpenny summarized these for us at the start of 2022:

Salesforce is pushing Flow hard. Anything which isn’t bespoke (very custom) should be built through Flow.

Notable enhancements for developers to ‘raise their game’ include:

The Salesforce Lightning framework is all about components – i.e. ‘building blocks’ – that can be reusable across the organization.  Developers can act as multipliers for the rest of their teams by creating reusable components and actions that can be used in Flows, and elsewhere in the Salesforce UI.

Invocable actions are one key example, which “allow developers to package useful code functionality into declarative building blocks that can be used in other Salesforce tools”. This includes Flow, among others.

One of these ‘others’ is Account Engagement (Pardot) External Actions. External Actions allow marketers to take actions on prospects (the ‘people objects’) outside of Pardot (Account Engagement) through low-code tools, such as Engagement Studio. The invocable action sets the parameters for input (to Flow or Engagement Studio) which then use these values for the output, such as a webinar platform where you want to send prospect data to register them for the upcoming webinar.

Watch the demo at the Dreamforce ‘22 Developer Keynote:

With Code Builder, Salesforce developers get the best of both worlds – a web-based environment and all the productivity-boosting tools that make building apps on the Salesforce platform faster and easier.

Code Builder enables the developers to build applications on the Salesforce platform, including Salesforce Extensions, the Salesforce CLI, Git integration, by authenticating to the Salesforce org you’re currently working on – with no setup or configuration required.

This is one that’s worth checking out, as we suspect some developers aren’t taking advantage of it yet.

Salesforce Functions allow developers to extend the functionality of the Salesforce platform like never before. Functions utilize the code running in your preferred programming language (that’s right, you can use something other than Apex!) in a separate, dedicated, and secure compute environment.

Developers should be aware of how Salesforce Functions can be used, and when they’re the correct tool for the job. Work with the Salesforce platform rather than fighting it, especially for highly complex business processes.

“I see Functions being the key to making many solutions much simpler and have my fingers firmly crossed that a price reduction or remodeling will make an appearance.”

Being aware of second generation packaging will be very important for anybody who’s working for an ISV, or in a product situation, where there is the intent for it to go onto the AppExchange. There will come a time when all packages will be second generation packaging – while that’s unlikely to be in 2023, it’s likely Salesforce will allow free migration from 1GP to 2GP. Potentially, get on board early; Salesforce will give you support because you’re an early adopter.

The cost savings when moving to 2GP are massive in terms of how much time it saves development resources. 2GP also has a tighter integration with DevOps.

“We have 1GP and 2GP versions of our app. The 1GP version takes around 20 minutes to install it in a test environment – you upload it, wait while it has a think, then you’ve got to upload the package, and then wait some more. With 2GP, you can automate this process.”

DevOps is a relatively new concept in Salesforce. In the last few years the tooling has gotten better – including Salesforce’s long-awaited DevOps Center  and third-party providers.

SFDX, generally speaking, is hot – and it’s only going to get more important as time goes on.

DevOps is highly applicable to consultant-developers working in a consultancy where it’s tricky to manage deployments across multiple orgs. Outside of consultancies, it’s still important to use source control and have an automated release pipeline, even if it’s simple to validate a deployment will work.

READ MORE: How To Automate Your Salesforce Releases

Not only should developers get ‘cozy’ with DevOps, they could also start to think about DevSecOps, the next step in the DevOps evolution. DevSecOps aims to bring security into the operations model, and therefore  mitigate security risks, all while keeping your CI/CD pipeline moving along without delays – and making the everyday life of a developer easier.

READ MORE: The Evolution of DevOps in Salesforce

2023 is guaranteed to be an exciting year for developers. With added features and new concepts to explore, you can expect more powerful deployments, extended functionality, and more efficient results for you and your org.