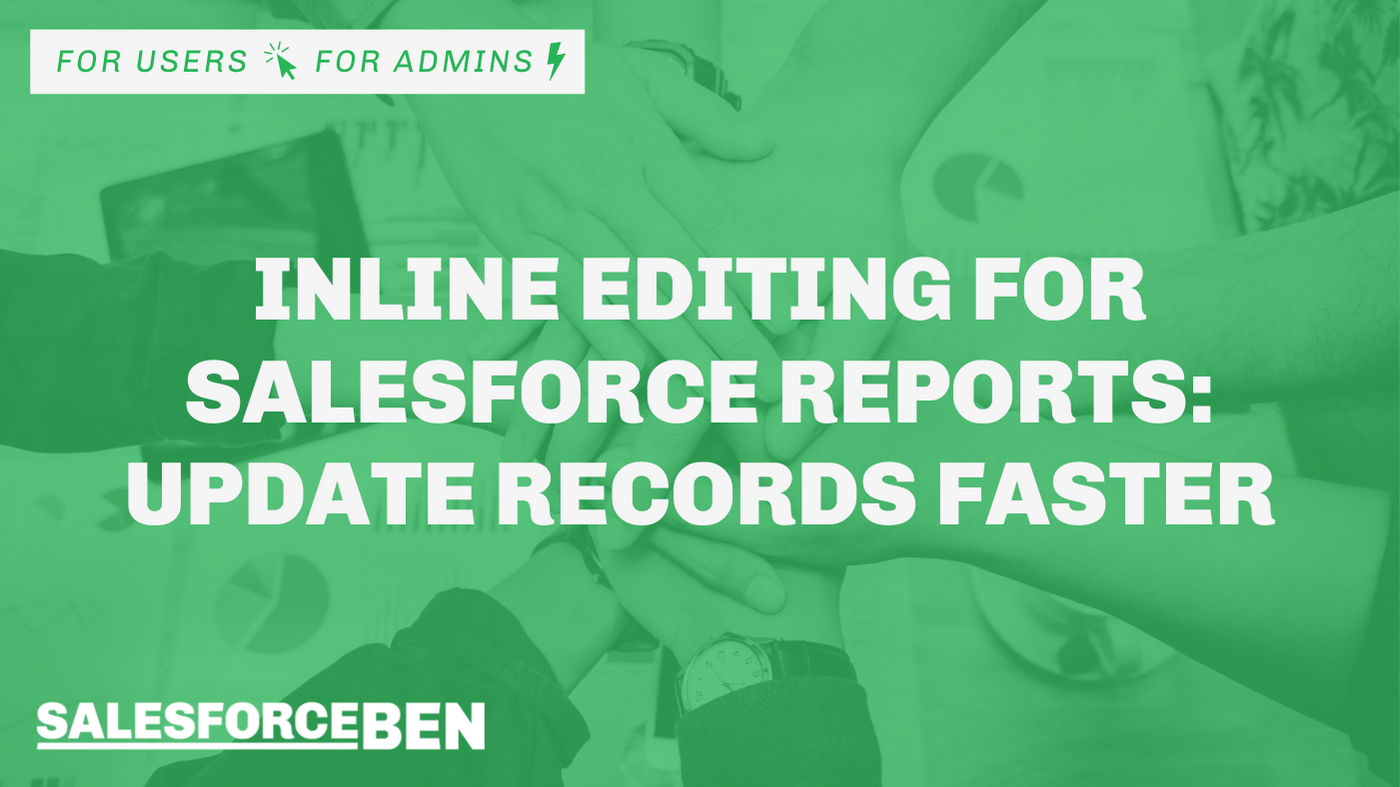 Andreea is a Salesforce Consultant with a passion for UX and process automation.

With the risk of sounding biased (and maybe I am), inline editing within Salesforce reports has been one of my dreams since I first discovered list views and the joys of inline editing they provide. Great news – both users and admins can finally quit dreaming about being able to inline edit in reports!

In this article, we’ll jump into how you can inline edit in reports and learn about some important considerations.

What is Inline Editing in Salesforce?

Inline editing is the ability to change the value of a field, without needing to navigate to a record. Inline editing means being able to update a record from somewhere other than the record page, such as a list view or report. It has multiple benefits including fewer clicks and greater user adoption of features and Salesforce.

What is a Salesforce Report?

Standard Salesforce reports are something surely every admin and most likely the advanced users are accustomed to building day-in and day-out to visualize the data in various ways.

Reports represent the analytics base of Salesforce as well as a dynamic, user friendly and much prettier alternative to pivot tables and many excel formulas. Until recently, they have been the key way to view Salesforce data. However, reports only allow you to view data, not amend it.

One of the most frequent user questions I bump into is definitely “How can I export my Opportunities to update each one in Excel?”.


This presents several problems. For a start, we don’t want users editing data outside of Salesforce! Second, the ‘Export Reports’ permission does not offer granular control over which objects can be exported, therefore with this permission, a user could export any report and its data if they had access to the report. In order to avoid a possible data leak, the alternative was to recommend a list view be used to update various Opportunity fields.

With the right permissions assigned, users are able to edit certain fields, for up to 200 records at a time.

There are a few drawbacks to prompting users to use list views:

The limitations around list views, as well as a huge demand to improve native reporting capabilities, did make inline editing within Salesforce reports a dream come true.

With the release of this new functionality, Salesforce upped their user experience game considerably and, even though still in Beta, the capabilities seem to be expanded with every release.

Similar to the Dynamic Gauge Charts, Inline Editing in Reports can be enabled from the Report and Dashboard settings.

What can be Edited within Reports?

When this functionality was initially made available as part of the Summer ’21 release, it was great to play around with, but there were a limited number of field types that could be edited. Salesforce has made considerable effort to improve upon this, and in the Winter ‘22 release, many more fields became available!

The first thing I wanted to try was editing Opportunities as if I were a Sales Rep. The fact that picklists and standard date fields were initially not available was a drawback. With the Winter ‘22 release, this is no longer an issue and Sales team members as well as Sales Ops can edit key Opportunity fields such as ‘Stage’, right within the report!

Initially, only one change was supported at a time, and the report refreshed as soon as ‘Save’ is hit to reflect the most up to date information. This meant that I couldn’t edit multiple ‘Close Date’ fields on multiple records and then save. I would need to make a single change and then make edits to another field on a different record, repeating the process as many times as needed, or simply use list views instead.

As part of the Spring ’22 release, Salesforce made editing multiple rows and columns from different records at the same time available right within the report run page.

Not has mass inline editing become available within reports, but also changing a field now makes other related fields display as Pending until the report is saved – for example, changing the Account Name on an Opportunity will mark the Employees value as Pending as they depend on the Account record.

Along with the Summer ’22 release, editing multiple fields from the same or different records (rows or columns in the report) became generally available for your users’ productivity to skyrocket directly from the report run page, with only one save!

You can check all the details around this functionality, as well as limitations, in the Winter ‘22 , Spring ’22 and Summer ’22 release notes. To get a sense of how this feature has evolved, it’s worth taking a look at the Summer ‘21 notes as well.

One of the benefits of using reports is that user adoption is likely already pretty high. Your users are already familiar with creating and using reports, therefore adoption of inline edit for reports should be a piece of cake – it’s going to add extra functionality to something they’re already doing, but with fewer clicks and Excel exports!

Updating the ‘Next Step’ on an Opportunity might prove crucial for Sales Managers to know exactly how the deal will be progressing. Instead of opening individual Opportunities and searching for the field on the layout, Sales Reps can now open the report from their team’s dashboard and enter their notes while even making use of a chart to better filter records.

For more complex organizations, another huge advantage will definitely be the ability to better isolate data with the use of cross-filters in reports, which is not an option when using list views.

Note: Another thing reports and list views have now in common, is that editable fields will have the pencil appearing when hovering over them, while non-editable ones will display a lock. This will ensure that users won’t spend time trying over and over again to make a change.

Inline editing in reports isn’t just for the Sales team! The inline field edit can be a time saver for Support and Marketing teams as well. For example, if the Marketing team is using Salesforce Campaigns, there is surely at least one dashboard used to track performance or perhaps other KPIs.

With this new functionality, marketers do not have to drill down into the individual records anymore and then return to the report but can actually make adjustments to the key fields as they go.

Note: Fields used within reports as groupings are not available for inline editing.

This feature is also hugely beneficial for myself and my fellow Admins. When troubleshooting different automations triggered by value changes, such as a boolean or perhaps a date, we typically use a report to measure the impact by the number of records.

As long as the field permissions are in place and the field is not marked as read-only on the layout, records can be edited one by one to do such testing without having to open 20 tabs and switch between them – if that’s not making our lives easier, I don’t know what is.

Inline editing within reports is a valuable functionality (even though still beta) that is sure to help you drive adoption with your users while keeping them within Salesforce rather than external tools, such as Excel.

If you’re new to Salesforce or would simply like to learn more about Reports, feel free to check the dedicated trailhead modules by Salesforce on Trailhead.