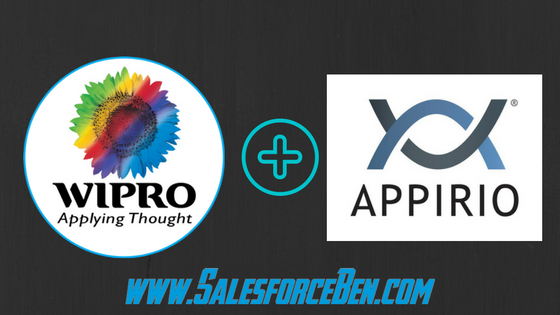 On Thursday, October 20, 2016, Wipro confirmed rumors that it had purchased the ten year old, Indianapolis-based Appirio for $500 million. Appirio was co-founded by CEO Chris Barbin, along with Mike O’Brien, Glenn Weinstein and Narinder Singh, and had received financial backing totaling over $110 million from Fidelity, General Atlantic and Sequoia. They were recently valued at $535 million, per Pitchbook.  Appirio helps enterprise organizations integrate cloud-based software like Salesforce and Workday into their businesses. They moved their headquarters from San Francisco to Indianapolis last summer, in part due to the fierce competition for tech talent in California.

It’s a curious transaction. Just six short months ago, Chris Barbin told the Indianapolis Business Journal that “I would prefer IPO…we started something really special here.” Barbin also said that “The opportunity to shape and change a market is a very unique opportunity, so staying independent is much more appealing than doing it as a division or business unit of another company.”  So, why did the sale take place?

Chris Barbin answers that question in a blog he posted on October 20th.  Barbin clearly stated it was not an easy decision, and it had nothing to do with the “easy excuses” as he put it: The board forced it. Investors needed their return. The CEO was tired. No – it was none of those.  Barbin said it was the “Four C’s” that drove the decision: Customers, Careers, Competition and Culture.

Customers – Appirio has worked with 1,200 customers over the past decade, with hundreds forming long-term, strategic relationships, and a select few becoming members of Appirio’s advisory board. Barbin said the last thing he wanted to do was to disappoint any of them, professionally or personally.

Careers – Barbin indicated that Appirio has always had a very strong workforce, with a lot of talent, but he wanted that talent to have a lot more opportunity to grow and learn faster, which is why teaming up with Wipro is a great fit. Wipro has more than 50 offices worldwide, a very strong and deep talent pool as well as an extensive online university for growing employees, and formalized career and succession planning processes. Barbin said he is impressed with Wipro’s strong leadership team who have gracefully scaled their business.

Competition – Appirio strives to beat the competition whenever they can. Barbin says he has a lot of respect for what Accenture and Deloitte have been able to accomplish over the past five years. Appirio has made some in-roads against the competition, but in the end, Accenture and Deloitte have gained a disproportionate share of the market, so joining the Wipro team became the next logical step towards moving to the number one spot in the market.

Culture – Barbin says the alignment with Wipro isn’t just “good on paper;” He says it feels right. He says culture is what keeps him up at night. Culture is what drives him, and the culture he has managed to create at Appirio is what his is most proud of.  Barbin indicated that a few dozen firms were interested in acquiring Appirio, and that most of those were single conversations, with a small handful moving onto more serious conversations. In late summer her met with Wipro and immediately felt a connection over things that really matter: value, vision, and team. Within a few short months, Barbin knew that found a true partner in Wipro. He says he’s sure there will be some who wonder why the transaction took place, but he is certain it is the right thing, and the only direction things are headed is up.

A curious transaction?  Not anymore. It’s a CEO doing what’s right, and what matters most to his company, his colleagues and his customer.  Congratulations to both Appirio and Wipro. I’m excited to see what happens next!

One thought on “Appirio gets Acquired by Wipro”