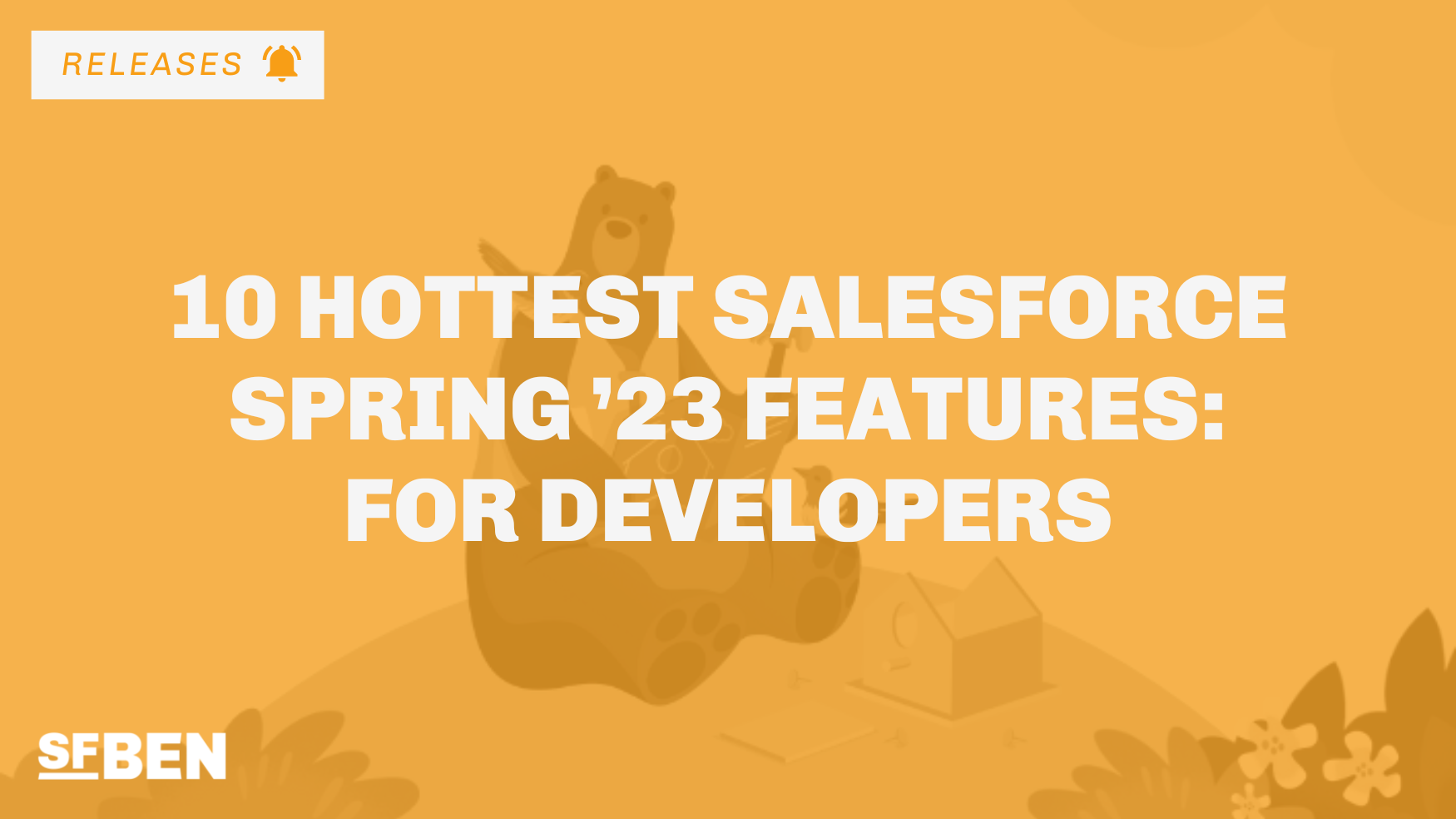 Andrew is the Salesforce Technical Trainer at Salesforce Ben. He has over 12 years experience working in the ecosystem, starting off as a retail end user. He is now 12 x certified and a Trailblazer mentor.

The Salesforce Spring ‘23 release is just around the corner and the release notes have arrived as an early festive gift. This release is packed with plenty of great new features and – spoiler alert – some features expected in Summer ‘23 have actually been released early!

You can find everything you need to know about how to prepare and when your instance will get upgraded here. For now, let’s dive into the most exciting features for Developers of the Salesforce Spring ‘23 release.

The only way you won’t have already heard about this is if you’ve been living under a rock for the past month!

DevOps Center is now GA and everyone can make full use of it. Though Salesforce Change Sets still have a special place in my heart, as they helped me understand change management as a concept, I feel that DevOps Center may supersede them.

Using the Apex SDK for Slack (Beta) you are now able to run a screen flow without input parameters using shortcuts or a button in Slack. Just define an app or a view in Slack that invokes a flow that has the “Make Available in Slack” advanced setting selected. Build an app to provide users with global shortcuts, message shortcuts, or slash commands that invoke flows from Slack.

Another Beta relating to Flow Builder, this time in the form of External Data. You can now automate processes with external data by creating Flow Builder actions that call web-based service APIs using HTTP Callout.

Async SOQL is used for Big Objects, Field Audit Trail, and the Connect REST API. As of Spring ‘23, this is going to be retired in all orgs. Instead of using Async SOQL queries, you will need to replace these with Bulk API and batch Apex.

5. Escape the Label Attribute of Elements to Prevent Cross-Site Scripting in Visualforce Pages

To prevent malicious code from executing in cross-site scripting (XSS) attacks on your Visualforce pages, this release update escapes the label attribute of your tags. This was first available in Winter ’23 and is being enforced in Spring ‘23.

In your org’s Apex Settings you will see a new option of Restrict non-core users from executing anonymous Apex. This allows admins to restrict anonymous Apex execution to core users, such as Standard and CsnOnly users, by using the RestrictCommunityExecAnon preference. When enabled, noncore users can’t execute anonymous Apex regardless of any other user permissions that are set, such as Author Apex.

To verify that micro-batching is working as expected via Apex, test the createRecordAsync method in the Apex class by adding the test class definition. For example:

9. Enable Lookup Tables and Expression Sets in Your Scratch Orgs

Last but not least, there have been some changes to certain Lightning Web Components, as detailed below:

This is a brand new component, embedding an icon that launches a barcode scanner when the user clicks it. You can configure this component to only scan certain barcode types, change the size of the camera view, customize the icon, and more.

An update to the existing component, the icon colors of the Standard Object, Action, and Doctype icons for accessibility have been updated to match the Salesforce Lightning Design System (SLDS) icon blueprint.

This component has been updated with two new size attribute options:

That’s it for our rundown of the best Salesforce Spring ‘23 release features for developers. What other new features have you spotted? Let us know in the comments!