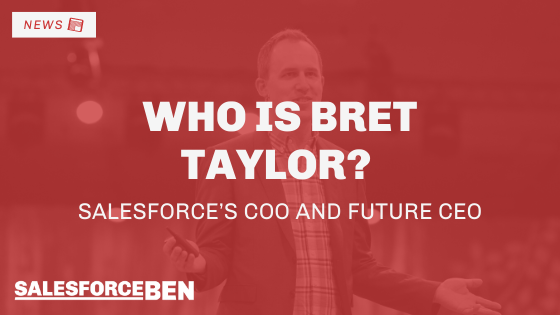 If you’ve been following Salesforce’s leadership team story, you will have no doubt heard of Bret Taylor. He’s the man behind Quip, the Slack acquisition, as well as Salesforce’s global product vision (no pressure…)

Taylor joined Salesforce through the Quip acquisition in 2016, a company that he co-founded in 2013. But – who is Bret Taylor – and could he be the next CEO of Salesforce?

Bret Taylor is a serial entrepreneur and a familiar face in the Silicon Valley start-up scene. After graduating from Stanford University, he held senior positions at Google and Facebook, as well as founded (and exited) two businesses, which led him to his role of President & COO at Salesforce. From his highlight achievements, you can see why he has risen the ranks to the position he holds today.

Salesforce was rocked by the unexpected departure of Keith Block in Feb 2020, who had taken up a co-CEO role 2 years earlier in 2018. Marc Benioff claimed Block was the best sales executive the enterprise software industry has ever seen and credited many of Salesforce’s $100 million-plus deals to his influence. Block was always seen as a natural successor to Benioff.

Over the past couple of years, Taylor has been pushed into the limelight, charged with leading Salesforce’s global product vision, as well as being instrumental in the $28B acquisition of Slack. Eyes are again on the successor to Benioff.

Could Bret Taylor be the man to lead Salesforce into the next stage of its journey? The Customer 360 vision + Slack could be firmly in his hands…