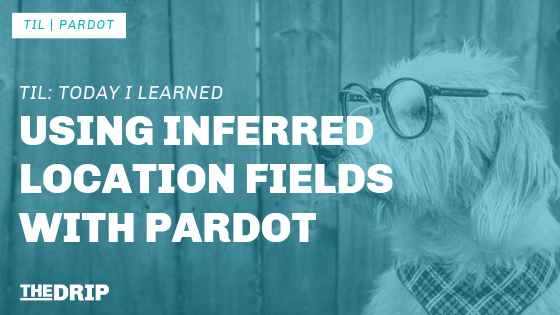 TIL:Today I Learned –  a series of short posts compiling Pardot tips & tricks that solve little, everyday frustrations – or something worth highlighting!

Inferred Location is a popular Marketo feature that populates a prospect’s location data when they convert, based on their IP address information. It’s a great feature to gain accurate* data for country and state, while reducing the number of fields on your web forms.

Definition of ‘Inferred’: “to deduce something from evidence and reasoning rather than from explicit statements”…
…so we can translate that into a marketing automation context as deducing a prospect’s location from their IP rather than data they submit.

If you have migrated across from Marketo to Pardot, you may panic at first when you search in vain for Pardot’s equivalent. No worries, as TIL how the equivalent works in Pardot and how to enable it.

*there’s technical reasons why inferred location is not 100% accurate and should not be taken as the ultimate truth.

This is the official name of the Pardot equivalent of Inferred Location. In short, it takes the location data from the prospect’s IP and auto-fills the default state/country prospect fields. If a prospect’s fields have been populated like this, you will see a globe icon by that field.

It won’t override any existing data, only populate blank fields.

When you want to reference Inferred Location in any automation, you just use the default country/state fields, and do not need to explicitly call out inferred location (like you would do in Marketo, shown in the image below).

Scroll down to find the setting checkbox, just above ‘Product and Service Notifications’ header.

One thought on “TIL: Inferred Location Fields with Pardot”