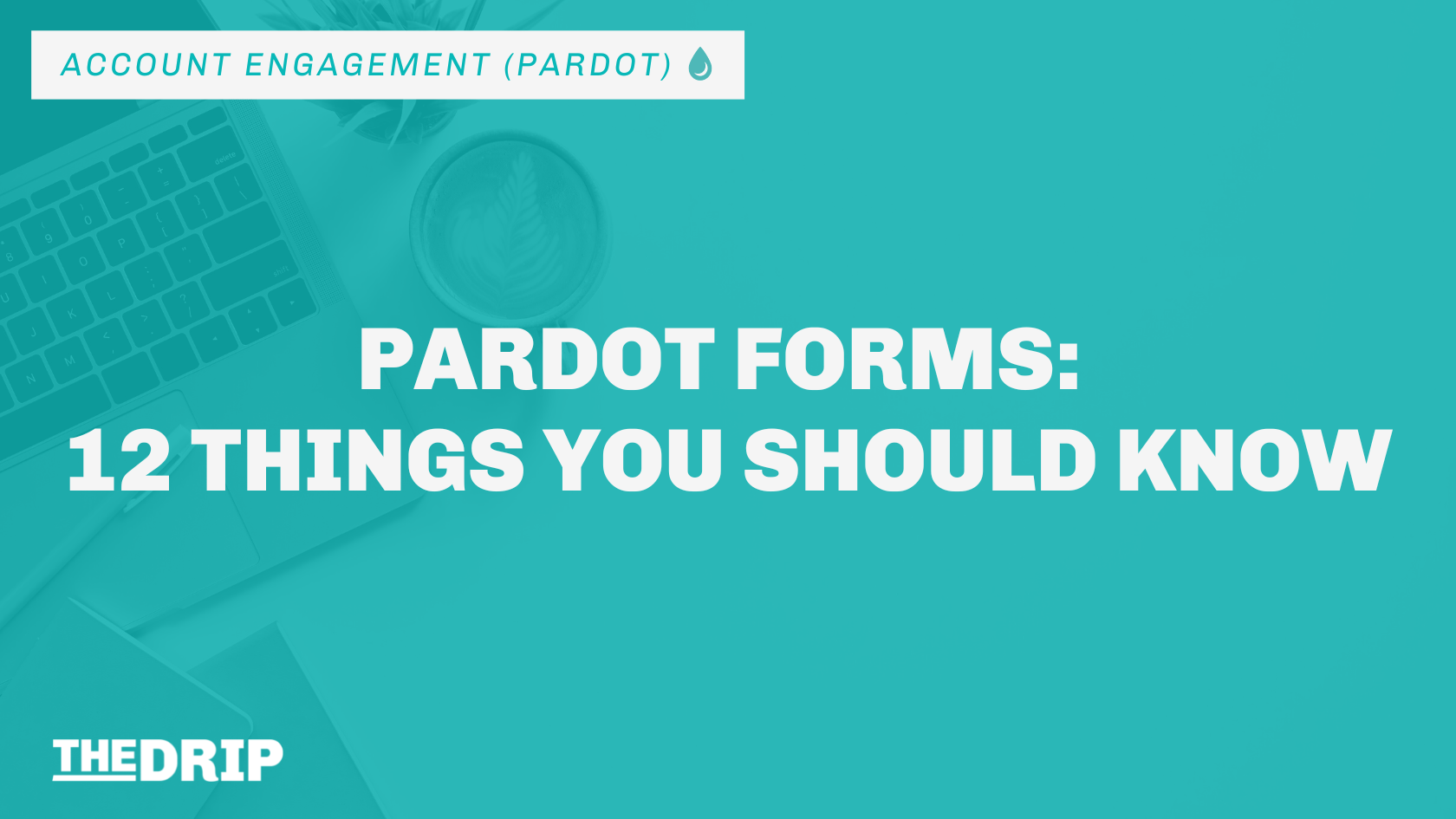 Pardot forms are simple to set up and maintain (mostly) from within the point-and-click Pardot form builder. Select which fields you want prospects to complete, decide which actions you want Pardot (Marketing Cloud Account Engagement) to take when the form is submitted (known as completion actions), and place the form on your website/landing pages – and away you go!

Sometimes, it’s not as simple. There are Pardot form ‘gotchas’ that can sneak up on you, complicate your campaigns, skew your reporting and put a ‘spanner in the works’ for your data quality.

There are many resources that cover how to create Pardot forms and the purpose of each form setting – in fact, you’ll find some included throughout this guide. So instead, I thought it would be beneficial to compile some Pardot form tips that you may not have come across. Hopefully, you will come out of this clued up.

Every Pardot form is based on a Pardot layout template that determines how forms look – either you want forms to share the same style, for branding consistency, or be styled differently from one another.

You set the ‘Look and Feel’ on Step 3 of the Pardot Form Wizard, where you are required to select a layout template:

You may have guessed already – the layout template needs to exist before you create the form.

Pardot layout templates define the style of both forms and landing pages. Gotcha! This is not so obvious to realize. Forms have their own page, and layout templates are configured from another page. Navigate to: Content → Layout Templates.

2. How to Style to Pardot Forms

When it comes to styling Pardot forms, such as the font, color, and field positioning there are multiple options. Which one you use will depend on a) what you need the form to look like, and b) your knowledge of CSS.

Option A (Low code): Pardot follows the ‘clicks not code’ philosophy, and so has opened up some styling options in the Form Wizard:

Option B (More code): If you want to customize your forms beyond these options, you will need to dive into the layout template section and go ‘under the hood’, for example, to use your company’s font that’s not available in Pardot’s default selection.

The layout template (introduced in point #1) uses CSS to control how HTML elements are displayed on the prospect’s screen.

Even sneakier, when you go into a layout template, you will land on the landing page style sheet. The form’s CSS is actually controlled by the “form” tab on the layout template edit page.

Gotcha! You may now realize that CSS is beyond your capabilities. You may need to find other skilled professionals who have those skills, affecting the time it will take to develop and launch your forms.

Having said this, there are tools out there to support you, so give them a go before you look for external help:

At least you can view which forms/landing pages which use the layout template before you make any unintended changes!

3. Pardot Forms Are For Prospect Fields Only

When building Pardot forms, you will quickly notice that only Prospect Fields are available to choose from. This means that you cannot use Prospect Account, Opportunity, or custom object fields. Although frustrating, it does make sense when you consider how complex the data model is between prospects and all the related objects.

Note: If you do need forms to create/update related records, there are options available on the Salesforce AppExchange, here’s an example.

When adding, or updating, a prospect field that’s on a Pardot form, always click the ‘Load Default Data’ button beside the ‘Prospect field’ dropdown (found on step 2 of the Form Wizard).

Doing this ensures that:

Why is this important? The ‘Load Default Data’ button recalibrates the field type selected to ensure that it’s in line with your database. It’s especially important for dropdowns, syncing the correct set values for prospects to select from when they view the form.

If you don’t click this button, you risk prospects submitting data that Pardot won’t be able to store in the correct field, or prospects selecting old dropdown values that no longer exist in your Pardot/Salesforce database. Gotcha!

Kiosk mode is a Pardot form setting that stops a Pardot tracking cookie being placed on your browser when you submit a form.

With Kiosk Mode enabled, no one gets cookied. Why would you want this to be prevented? The most common use case for Kiosk Mode is for devices set up at events to capture data from multiple prospects. You don’t want any activity on the device to be associated to the most recent prospect that submitted the form.

Pardot Kiosk Mode isn’t something that stands out in the UI, hidden out of the way. Find it under ‘Look and Feel’ → “Advanced” tab:

It’s especially a ‘gotcha’ if your team copies forms. It’s always worth checking the ‘Advanced’ tab and these settings or your reporting will suffer.

For those marketers who create marketing assets in multiple languages, there’s an added layer of complexity required in your Pardot account.

I’ve seen Pardot form translations done in an incorrect way, where marketers will create a new field for each language. Use form field labels to ‘relabel’ your form fields in different languages. Using the same field means that all data will point to the same field in the back-end.

All text can be changed at the form level by using form field labels, apart from two pieces of text that are controlled by the form layout template:

So, you have to dive into the layout template code (point #2). I suggest you create templates for each language – do it once, and don’t worry about it again.

READ MORE: 4 Tips for Managing Multiple Languages in Pardot
READ MORE: How to Change the ”Not You?” Link Text on Pardot Forms

Web-to-Lead forms are integrated with Salesforce Sales Cloud, so a form submission generates a lead record immediately in Salesforce. It’s the most basic method for Salesforce data capture.

Choose one – either Pardot or Salesforce Web-to-Lead.

The way the Salesforce-Pardot connector sync works puts you at a high risk of duplicate records. When a Web-to-lead forms is submitted, there is no check for duplicates, i.e. records that may already exist in Salesforce. Aside from all the other benefits of the Pardot form builder, Pardot is able to check for existing prospect records, based on email address, and match the new submission to existing records.

Organizations who have used Salesforce for some time and then purchase Pardot, they rush launch Pardot forms (or form handlers) but fail to disable web-to-lead in the process.

Finally, using Pardot forms puts forms creation and maintenance into the marketing team’s control, as opposed to relying on the Salesforce Admin or website team to update web-to-lead forms.

Embedding Pardot Forms on your website will give you more control and also take advantage of Pardot’s enhanced features, such as progressive profiling, dependent fields, and users will be recognized when they come back to the form.

Be aware when using an iframe to embed a Pardot form because the length of your form will be restricted. You may want to work with a web developer to dynamically size the form on your site.

You’ve created your form, placed it on a Pardot landing page, and are receiving submissions. You look at your form report, and see no numbers.

Look at the Landing Page report for your statistics, including form Views, Successes, and Errors.

Builders for Pardot emails and landing pages are available in the Lightning experience, which brings many benefits versus the legacy (classic) builders.

At the time of writing, there is no Pardot Lightning form builder.

The ‘Form’ component is a standard component that’s available to drag onto the email/landing page canvas. Gotcha! You still need to build forms in the form wizard, (including the above form and below form content). However, forms will inherit the same style as the landing page – so less fuss all-around.

Allow Multiple Prospects with Same Email Address (AMPSEA) means that unique identifier (i.e. what Pardot uses to distinguish one prospect record from another) is CRM ID (the Lead or a Contact record ID in Salesforce).

When it comes to Pardot form activities and AMPSEA, it all depends on whether the Prospect has been cookied already. If a Pardot cookie association exists between the individual’s browser and their Prospect record, that tie will win, and the activity saved to that Prospect record – simple.

What happens when there’s no cookie, and there are more than Prospect records that use that email address? Which does it choose? Gotcha! Get clued up on AMPSEA with these rules to remember:

A security enhancement that was rolled out in 2022 meant that certain types of forms have the potential to stop functioning.

​​The roll-out will impact Pardot (Marketing Cloud Account Engagement) customers who are using the default go.pardot.com domain for their marketing assets. The alternative (now imperative) method is to set up a custom tracker domain (if I’ve lost you here, don’t worry, I’ll iron this concept out!).

Bonus: When You Should Use a Pardot Form Handler

In this guide, we’ve taken a tour around Pardot forms and their benefits (and quirks!) However, using Pardot forms may not always be the best option. In some cases, Pardot form handlers are much better suited. Read these guides to find out when, why, and how:

Pardot forms are simple to set up and maintain (mostly) from within the point-and-click Pardot form builder. This puts the control back into the marketing team’s hands.

Having said that, there are Pardot form ‘gotchas’ that can sneak up on you, complicate your campaigns, skew your reporting and put a ‘spanner in the works’ for your data quality. These include:

Pardot forms are simple to set up and maintain (mostly) from within the point-and-click Pardot form builder. This puts the control back into the marketing team’s hands.

Having said that, there are Pardot form ‘gotchas’ that can sneak up on you, complicate your campaigns, skew your reporting and put a ‘spanner in the works’ for your data quality. These include:

Now you’re clued-up on the most common traps, it’s time for you to explore more Pardot form features.

READ MORE: 6 Advanced Pardot Form Features You Should Be Using