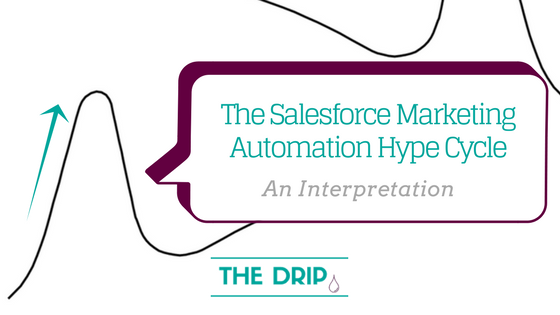 We’ve come to the last month of the year, so it seems a good time to take stock of the MarTech trends that have wrapped us up in a flurry of innovation during 2017.

The ‘Hype Cycle’ is a graph that plots technology trends relation to Time & Expectation. Simply put, it shows what emerging technologies are causing a stir, and which trends are something more than just ‘hype’. 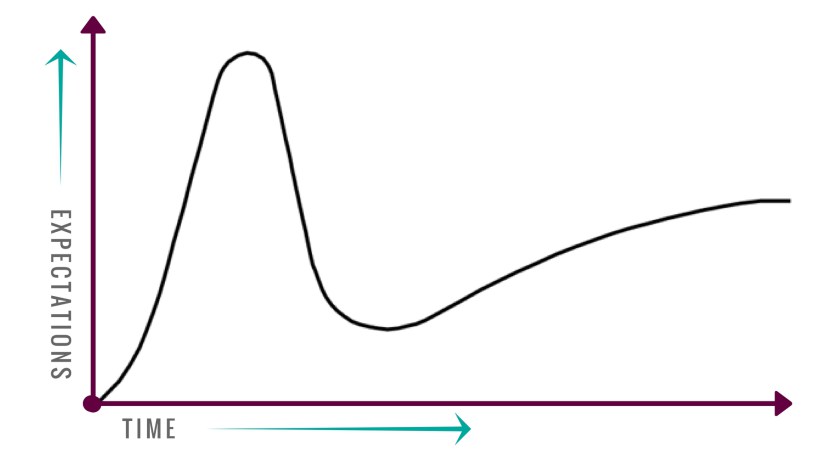 Gartner publishes Hype Cycles for many disciplines every year, to provide ‘a sound source of insight to manage [technology] deployment with the context of your specific business’[1]

There are five defined phases:

Jump to ‘The 5 Stages: Explained’. 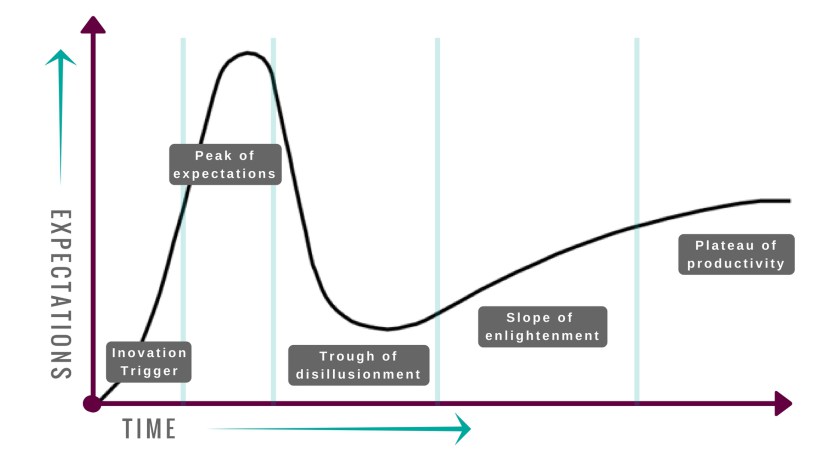 The Gartner Digital Marketing and Advertising Hype Cycle for 2017 was released mid-Oct, but I want to hone in on the Salesforce Marketing Ecosystem.

We are lucky, as Salesforce customers, to have the first intelligent CRM closer within our reach. Exciting times are ahead, and I believe that many listed will be clustered in the Enlightenment phase relatively soon.

In draft since July, my interpretation of the Hype Cycle is ready. It’s a result of painstakingly collating, assessing and plotting the technologies surrounding the Salesforce ecosystem and the MarTech industry more generally. It was a challenge – with multiple revisions as industry research surfaced, and Salesforce announced products and features worthy of a place.

This is what I came up with: 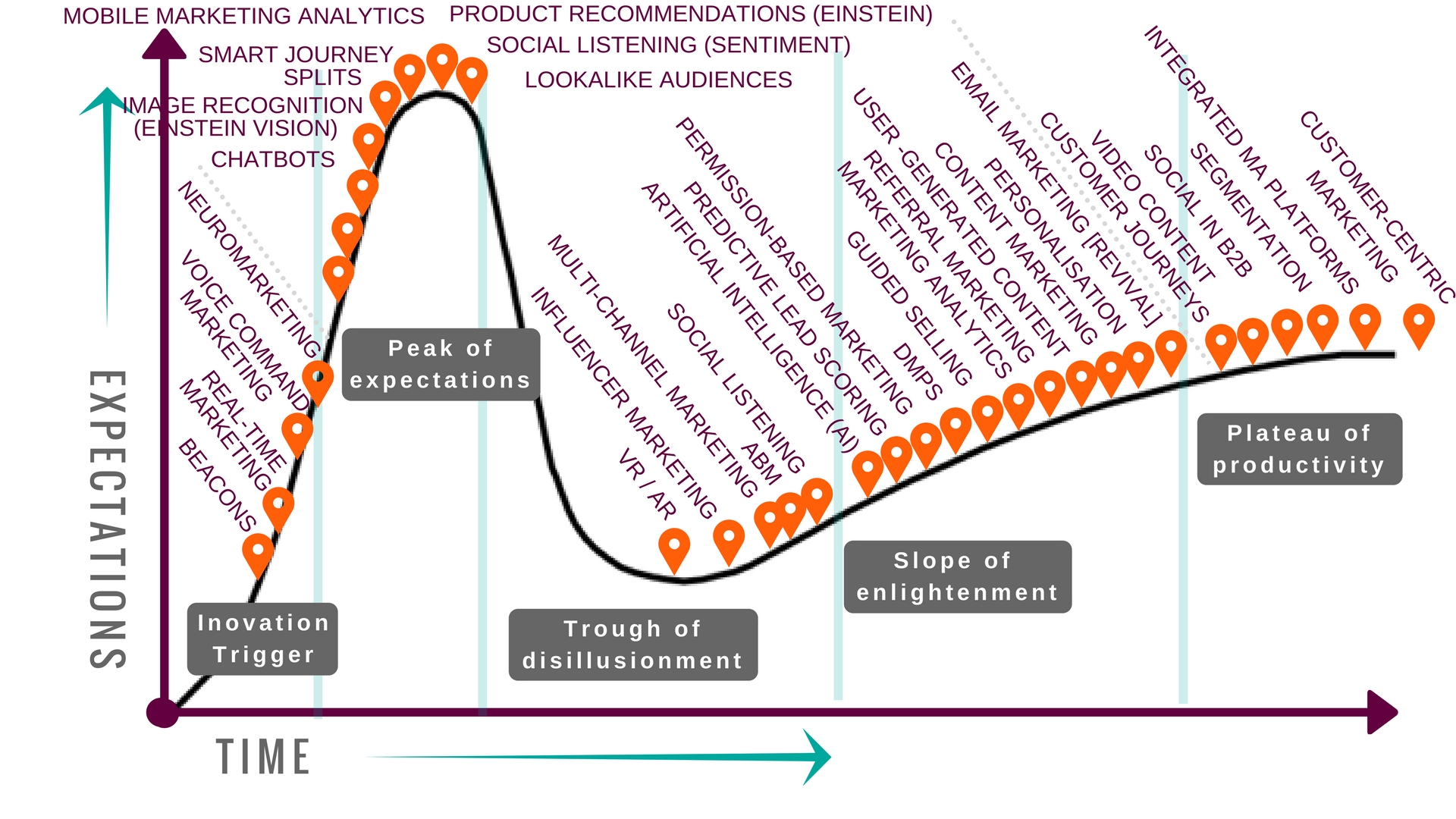 Over the next few weeks, I will be adding the explanation and justification about each hype, stage-by-stage – starting with the mainstream adopted technology sitting nicely in the ‘Plateau of Productivity’.

One last thing I want to say.

This is only an interpretation, so…

Anyone who has been in contact with any part of the Salesforce Ecosystem knows the ‘customer success’ mantra tied to any part of the platform. Salesforce were genius to follow their instinct for customer empowerment. Wind forward to close to two decades into the 21st century, the customer has access to more information than ever before. Knowledge is power, and the convergence of data and connectivity to the masses has made consumers savvier. We’ve heard it all before.

The days of interruptive marketing are pretty much gone- for most organisations, anyway. Salesforce Marketing products enable users to get smarter with the way they engage with customers so that the evils of mass-mailing, interruptive marketing, and cold calling are dying out. There are still some blatant laggards, but these are having a diminishing presence wherever they used to hang out.

Salesforce is a CRM at its core, but more importantly, is a platform with broad horizons.

As Salesforce and Marketing Cloud/Pardot users, you have already seen the importance of integrating your marketing automation with your CRM – to bring Marketing into the picture, and a serious contender in revenue growth. This is one of the ways Marketing Automation ‘tools’ have transitioned into Marketing Automation ‘platforms’ – from standalone to connected.

An all-in-one view makes data management, automation and intelligence possible – plus, you are ahead of the curve

Splitting your database into smaller groups of commonalities means you can make your messaging more relevant and sticky, based on who they are, what interests they’ve indicated and pain points they’ve signaled. Emails to segmented lists enjoy a 101% higher click-rate (source). There are no excuses left for not segmenting your database when using a marketing automation tool. In the context of Pardot, you can segment based on activity (scoring), attributes (grading), or both (blended model). As well as being simple to understand, these methods are widely adopted, down to scoring models come out-of-the-box with Pardot and other marketing automation tools on the market.

Social Media had a naturally strong play in B2C long before it was accepted in the B2B marketing sphere. Now in 2017, Social Media has become the most used ‘tactic’ in B2B marketing, with 83% executing their social strategies, via 6 different social channels – on average! (Source)

To reflect this trend into a Salesforce perspective, Social Connectors and Posting features have existed in the Pardot product for a number of years, across Facebook, Twitter, and LinkedIn. They were enhanced in 2016 to be more robust for heavier usage as companies increased their social channel reach. Even though Pardot is B2B at its core, Advertising Studio is being sold as part of a new-age B2B marketing stack, which has paved the way for other Social Media marketing tools, such as Salesforce Lead Analytics for Facebook.

Everyone is has been going crazy over video in 2017, consistently named one of the hottest trends in marketing. It’s a beautiful combination of an easier to digest form of content for the viewer, and lower barriers to entry for companies (equipment, editing, broadcasting).

At the tail-end of 2016, one survey found that 91% of businesses were planning to increase spending on video in 2017 (Wyzowl). The impact statistics are enticing, too – especially as more than 80% of all web traffic is predicted to be video by 2019 (Hubspot via Forbes).

This only just makes it into the stage, deliberately placed on the precipice. Customer Journeys, a set of automated actions that guide prospects/customers through desired interaction with your brand, are fast past being a ‘nice to have’. As (declarative) marketing automation features have improved, they can support a wider range of customer journey scenarios.

However, the term is overused, and underestimated – can we really say we have a customer journey just because it’s in a feature like Pardot’s Engagement Studio? A true customer journey is well-defined, where you should be able to pinpoint the exact position of each customer/prospect on that journey.

Innovation Trigger: the period when technology enthusiasts (the toughest critics) seek out the technology. Their excitement is contagious, which is when the visionaries (think VCs) catch a whiff and strike, driven by urgency in a closing window of opportunity.

Previous Post: Recency & Frequency: the Pardot ‘hack’ that will save you from Marketing Fatigue
Next Post: 8 compelling features to choose Pardot Pro Edition versus Standard Edition