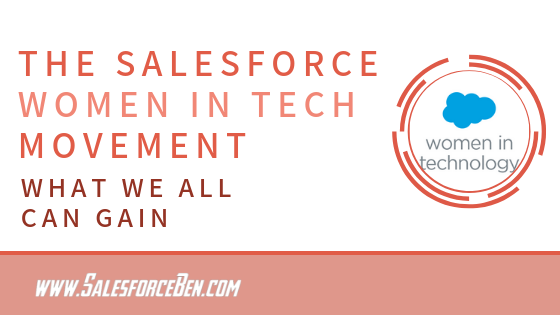 Back in 2015, Salesforce made a public commitment to pay equality, following a company-wide audit uncovered a $6 million disparity in pay between the sexes and other minority groups. As one of the first tech companies to balance the books, Salesforce was proud to report significant decreases in the number of employees who qualified for a salary adjustment (April 2018).

We’ve heard the statistics that paint a dire situation, that women continue to be underrepresented in technology industries, one of the four areas of ‘STEM’ (science, technology, engineering and maths). Experts believe it’s unlikely the gap will be bridged for another 100 years (McKinsey & Company) because the biases are deeply ingrained and frequently unconsciously reinforced.

Salesforce is an industry that’s blazing a trail, setting a new benchmark for the technology industry. According to Mason Frank, respondents to their annual Salesforce salary survey one year were 33% women, which indicated an increase of 6% from the previous year. Moreover, it sat above the industry average.

Aside from the number-crunching, how is the Salesforce ecosystem attracting and retaining female talent?

The Salesforce Women In Tech (@SFDCWiT) movement has been alive for a few years, especially following the 2015 pay audit. It continues to grow in strength, with user groups running across the globe.

The scarcity of women in the tech workforce meant that support wasn’t always readily available within every business – therefore women began to group together for peer-to-peer mentorship.

I am fully aware of how lucky I am to have entered the workforce in 2014, when women were reasonably represented in management, and by the time I moved along as a technologist in 2016, the conversation was well underway. Even reading Magdalena Yesil‘s memoir ‘PowerUP’, her story tells of a more hostile era for women pursuing a career in tech (side note: a great read, highly recommended. She was one of the first advocates for Salesforce, back when it was merely a disruptive concept).

In her book, Magdalena recalls the fragility with how gender is perceived. When requesting to interview other pioneering women in tech for her book, she found many declined on the premise that they had ‘never let [their] gender define me, and I don’t want to start doing that now’ attitude.

I was a little skeptical about women In tech groups generally, at first – and I had some questions I needed answering: do they draw the wrong kind of attention to the gender gap? Were these groups just as exclusive/exclusionary as the corporate ‘boy’s club’ is?

So I went along to find out.

What You Experience at Women in Tech Groups

I went along to the London Women in Tech Group with an open mind. I was impressed straight away, and since my first visit, I have left feeling uplifted after each session.

The first group left such a lasting impression on me, and I often reminisce on that evening. It was a session titled: “Somebody Inside“, reflecting on the inner voice of self-doubt that hijacks our rational thought processes, and leads to Impostor Syndrome amongst other negative effects that are debilitating to success. Examples of other thought-provoking sessions are setting holistic goals and facing fears (which included scaling the O2 Arena, a London landmark!).

The groups are a safe place to have a voice and acknowledge that other professionals in the industry share the same vulnerabilities.

I want to ensure that everyone shares the correct:

In a world where support-orientated groups are judged too quickly, subject to stereotyping, and even sadly mocked, I hope this post will encourage you to attend and support a Women in Tech User Group in person or virtually.

Ps. it’s not just the main Women in Tech movement that’s helping retain and support women in the Salesforce industry – here are some others worth checking out: Ladies Be Architects, Salesforce Supermums, Stemettes (apologies if I have missed any, I will add any left in the comments!).