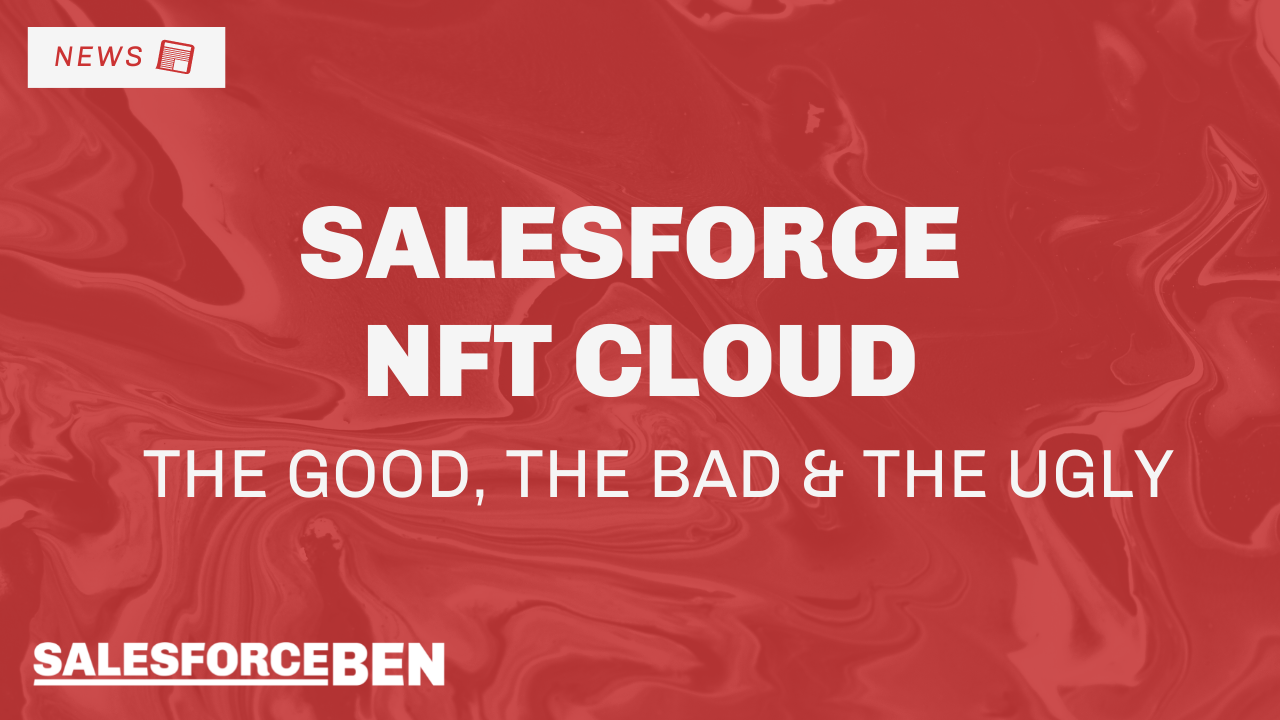 It’s been just over a week since reports leaked that Salesforce have started working on an NFT Cloud, and divided opinions are already spreading across the Salesforce ecosystem. Big brands such as Coca-Cola, the NBA, and Time Magazine have already launched their NFT collections, with many others due to jump on the bandwagon this year.

It’s no wonder that Salesforce wants to build a platform to support this new wave of digital art. But as hundreds of Salesforce employees sign a letter of protest against the company’s NFT plans, what makes these non-fungible tokens so controversial? Let’s take a look…

Before diving into the specifics of what a Salesforce NFT Cloud could mean, let’s first cover what the heck an NFT actually is!

NFT stands for Non-Fungible Token. The “non-fungible” part simply means that whatever you are buying is unique. Cash or bitcoin, for example, is fungible, as you can exchange one for another. Physical art or a rare baseball trading card are both non-fungible examples.

NFT technology is built on Blockchains e.g. Ethereum, and allows you to store practically anything. Ethereum.Org lists such examples as: digital artwork, in-game items, a digital collectable, a song, or a ticket that gives you access to an event.

Just like physical art, NFTs are a speculative asset; they are only worth whatever the market deems them to be worth. Currently, they are big business; in 2021, sales hit $41 billion, eclipsing the previous figure of $100 million.

Although NFTs could potentially contain any kind of digital asset, there are two “types” of NFTs that are currently thriving. These are individual, unique pieces of art, like the Mona Lisa, as well as collections of NFTs, that could be compared to baseball trading cards.

An example of one of the most expensive NFTs to ever sell is Mike Winkelmann’s ‘Everydays: the First 5000 Days‘, which is a collage of 5,000 digital images. The NFT sold at Christie’s in 2021 for $69.3 million. The piece was bought by Singapore-based programmer, Vignesh Sundaresan, who currently has the artwork on display in a digital museum.

Collections, on the other hand, are a limited edition run of images with similar characteristics. Take Bored Ape Yacht Club (BAYC), for example, a collection of 10,000 Bored Ape NFTs that are commonly bought, and used as display pictures across social media such as Instagram and Twitter.

BAYC currently sell for a minimum of $160k on OpenSea.io, and as well as owning the collectable, it doubles as a Yacht Club membership card, giving you access to an exclusive members club. The club has become synonymous with celebrity owners, with members including Eminem, Jimmy Fallon, Steph Curry and Paris Hilton.

Why Buy an NFT?

There has been a running joke amongst NFT naysayers, that you can simply save these expensive images as JPEGs and own them yourself. Whilst that is true, it’s not like your average Joe prints off Monets or Van Goghs to hang in their house and claim as their own.

The individuals buying NFTs for the appreciation of the art, are doing so to own the original, just as a fine art collector would. But of course, there are many other reasons you might buy an NFT. Maybe you want access to the BAYC? Or you might simply be buying one of these JPEGs as an asset, a collectable that you will see rising in value as time goes on.

Or maybe you are buying an NFT to redeem something in the real world? Gary Vaynerchuk, the Belarusian-American entrepreneur has created VeeFriends – an NFT collectable that allows you access to an exclusive conference.

An overarching theme in NFT ownership sentiment is the status play. Just as you would buy a Chanel bag or a Rolex for outward appearances, you might buy a BAYC NFT for the exact same reasons in the online world.

Whilst there is no official word from Salesforce on their NFT Cloud, we can piece together roughly what is happening behind the scenes.

At a high level, the NFT Cloud will be used to create, mint, and sell NFTs.

From this brief overview, it looks like Salesforce wants to own a slice of the $40 billion NFT pie, which is currently dominated by OpenSea.io and has a reported 60% market share. OpenSea.io has also recently raised a $300m Series C funding round at a $13.3 billion valuation.

The Good, The Bad, and The Ugly

Salesforce is no stranger to reacting almost instantly to global demands on technology. Back in 2019, they released Salesforce Blockchain, in response to the hype around Blockchain & Cryptocurrency, and since the Pandemic, they have released Work.com & Safety Cloud, two products focussed on opening the economy back up, safely.

Although the Salesforce NFT Cloud might come as a shock and almost feel a bit “off-piste” to some, if the NFT market is going to grow way beyond the $40 billion in transactions that occurred in 2021, then Salesforce could become perfectly poised for their customers to create, mint, and sell NFTs using their own product.

For independent artists, NFTs could be the future. They allow you to sell direct to consumers without the need for expensive art galleries or auction houses. They also allow artists to receive royalties whenever an NFT audio file is played, as well as whenever the NFT is sold on.

However, I doubt independent artists are the target market for Salesforce. The success of the NFT Cloud will undoubtedly come down to the success of brands launching their own NFTs, and how this influences their customers. So far, mainstream NFT launches have been widely successful, such as NBA Top Shot, as well as Time Magazine’s “Slice of Time” (also owned by Marc Benioff – coincidence? I think not).

However, it’s too early to see the effect on customer engagement, community, and replicability.

Whilst you could say that NFTs and digital art are a logical path for our evolution to the meta-verse, they don’t come without their fair share of criticism.

Firstly, you could say that NFTs are a bubble. Just look at the top 10 most expensive NFTs sold. You might agree that digital art is a cool idea, but completely disagree that a pixelated avatar is worth $23 million, no matter who you are. You could argue that these eye-watering prices are justified because these early NFTs are paving the way for the future of art. But with millions of NFTs out in the market, will they continue to hold their value?

You could also argue that NFTs are a Ponzi scheme. You only have to look at Twitter to see NFT creators aggressively trying to push their collections, in the hope that it will become the next BAYC. The more people that buy, the more demand and less supply there will be, pushing the price even higher.

News broke that some Salesforce employees aren’t happy with the new NFT Cloud. In fact, over 400 employees have signed an open letter, protesting the announcement.

The biggest criticism comes from the fact that blockchain, Ethereum, and NFTs require a large amount of energy to sustain the decentralized platform. Researchers estimate that a single NFT’s footprint is over 200 kilograms of carbon, which is the equivalent of driving 500 miles in a gas-powered car.

This isn’t the first time that an NFT project has come under fire due to environmental reasons. The World Wildlife Fund pulled out of their NFT launch, as they came under fire for damaging the environment they were campaigning to save.

The other criticism from Salesforce employees is an economic one, calling NFTs “unregulated, highly speculative financial assets”, which is intertwined with the fact that NFT scams are rife.

With Salesforce adding Sustainability as a core value only last week, the NFT announcement could have been an oversight. But it’s also important to understand that Blockchain enthusiasts are working hard to reduce the environmental impact of decentralized networks, with the Proof-of-stake concept due to arrive in June 2022, and promised to massively reduce the environmental impact.

I’m sure Blockchain, Cryptocurrency, and NFTs will remain controversial subjects for many years to come. Just as David Letterman mocked Bill Gates back in 1995 in regards to the internet, the same may happen with NFTs in 10-20 years’ time.

Whilst I always find new technology exciting, especially the kind that looks to disrupt and create an entirely new industry, it’s hard to get around the environmental impact that NFTs create. Business Insider reported that Salesforce are due to hold a “listening session” with employees this week.

I will personally be keeping an open mind, and look forward to seeing what Salesforce officially announce in the near future.

Previous Post: What is Salesforce DX? The Definitive Guide
Next Post: 8 Reasons Why You Shouldn’t Delete an Empty Field

2 thoughts on “Salesforce NFT Cloud – The Good, the Bad & the Ugly”