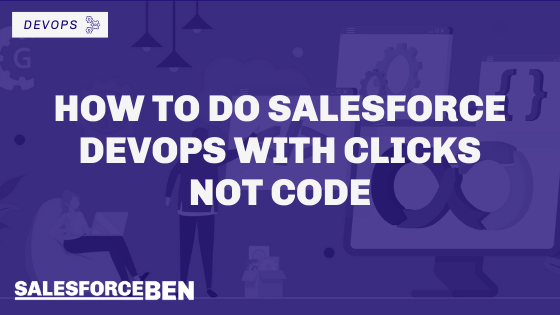 The relationship between Salesforce administrators and Salesforce developers has changed. Instead of admins and devs each doing their separate thing, teams of all technical abilities are increasingly working together within a single, streamlined development and release process. The driver of this exciting change is DevOps.

Across the Salesforce ecosystem, DevOps has become essential because it empowers everyone with the most effective and reliable processes for collaborating and releasing their work into production.

As an admin or declarative developer, you might wonder what DevOps means for you. You may even feel a little intimidated, especially if you’re unfamiliar with tools like version control or the benefits of a complete Salesforce DevOps solution like Gearset. So here’s a quick rundown of what DevOps can do for you. The good news: you can get up and running without needing to touch a developer’s command line!

DevOps is a set of tools, practices and a way of working together. In a nutshell, it solves common problems faced by teams building on Salesforce, while also opening up countless other benefits – for your team, your users and your business. Here are seven main benefits of DevOps, and how you can use them.

In short, deployments are painful, take a long time and can often fail or cause issues in production.

Teams use DevOps tools like Gearset to manage their entire release process. Even without version control or a full DevOps process in place, you can use Gearset to dramatically improve the speed and success rate of your deployments.

2. Version control: Collaborate easily with all of your team

The risks of working and making changes directly in a production org are well known. Mistakes can be expensive, and you don’t have oversight over changes made by others. That’s why many teams use sandboxes and deploy their changes to production using tools like change sets.

But how do you know what someone else has done in your org? There’s always a risk that you might overwrite their changes or run into a conflict that breaks something. These are just some of the reasons why both admins and devs use version control (a.k.a. ‘source control’). It gives you a way of tracking all the changes made by your team. Your version control system (VCS) becomes your team’s shared source of truth instead of your production org.

Getting to grips with a Git-based VCS doesn’t mean you need to be familiar with a command line interface. You don’t need to spend time learning tricky Git commands. Using Gearset, you can deploy your changes to and from your VCS in the same way that you deploy changes between Salesforce orgs. That’s because Gearset connects to your VCS and lets you interact with your Git repos from an intuitive UI, which makes it easy for you to track and deploy your changes, collaborate with devs, and keep all of your team’s orgs in sync.

Pushing and pulling changes between your orgs and version control can be done in a matter of clicks with Gearset. You just pick your source environment (e.g. your sandbox org) and your target environment (e.g. a Git branch in your repo). Gearset then compares your two environments and shows you the exact line-by-line metadata differences for you to select and deploy.

Once you’ve incorporated version control into your workflow, you’re ready to reap the benefits of automation. Here’s where DevOps truly comes into its own. It helps you progress new features and customizations through your team’s development pipeline and into the hands of your users as quickly and reliably as possible.

From Gearset’s UI, you can set up a continuous integration (CI) job in just a few clicks to make sure your in-org changes are automatically committed to your Git repos. Likewise, commits to your Git repos can trigger a CI job that will automatically deploy the changes to an org. These automated processes keep all your environments in sync. They also take the pain and risk out of manually deploying the same changes to development environments and on to production.

DevOps is an iterative and incremental approach to development. By making frequent, small, automated releases, you can continually ship completed work items to your users as soon as they’re ready. As a Salesforce team, this makes you more agile and responsive to user feedback.

4. Testing: Build features with the confidence that they’ll work

Testing is an integral part of any DevOps process – automated tests run every time changes are merged or deployed to another environment. As an admin or declarative developer, you can use Gearset to get production data into your sandboxes to test out new features, making sure you’ve covered all the possible edge cases that you find in real datasets. Gearset’s data deployment tools let you migrate records and their dependencies, including complex CPQ configurations, while preserving parent-child relationships. You also have options to help you comply with data privacy regulations and protect your company’s confidential records.

Developers on your team can also test their code using Gearset, for example, to check their work meets Salesforce’s code coverage requirements for unit testing before new releases. But, more importantly, they will use tests to make sure the features they’ve built meet your users’ requirements. From Gearset’s UI, you can see exactly which tests have been run by your team and the outcome of those tests. With your knowledge of your users and your org’s data, you can play a greater role in helping the devs on your team check that the features being built fully meet your company’s needs.

If someone on your team adds an urgent hotfix straight into production, you want to know about it, so you don’t overwrite the fix next time you deploy. Or, if someone accidentally modifies something in your org, say one of your key profiles, you want to know immediately – especially if it’s going to impact your users, customers or the business.

Gearset gives you the option to monitor metadata changes across all of your Salesforce environments. By setting up monitoring jobs that take automated daily snapshots of your org, you can keep a complete audit trail of all the changes made by your team. Monitoring jobs help you protect your org against unwanted changes. In Gearset, you can set up automated notifications that will alert you whenever any changes are made to your org or to critical parts of your org.

Mistakes happen. Using Gearset, you can easily roll back any changes from any deployment in your history, or revert to any point in your monitoring history.

Accidents and disasters can also affect your company’s critical data as well as your metadata. To restore lost data successfully, you often need to restore the associated metadata first.

Gearset supports both automated backups as well as backups that you can run on demand – for example, before you make a critical change to your org. Having access to backup and restore tools in the same place as your other DevOps tooling accelerates recovery times because the restore process is familiar. In fact, using Gearset, it’s exactly like the deployments you run day to day.

Salesforce DevOps can be done with clicks not code. As a complete DevOps solution built just for Salesforce, Gearset provides all the tools you need under one roof, with a modern, clean graphical user interface. In doing so, it lives up to the philosophy of DevOps: breaking down silos and blurring the differences between distinct roles – development and operations, admins and developers. When all Salesforce team members have access to the tools and processes they need to collaborate effectively, everyone benefits.

If you want to join the next generation of empowered admins, you can find out more about Gearset, and learn more about DevOps on our free training platform, DevOps Launchpad.