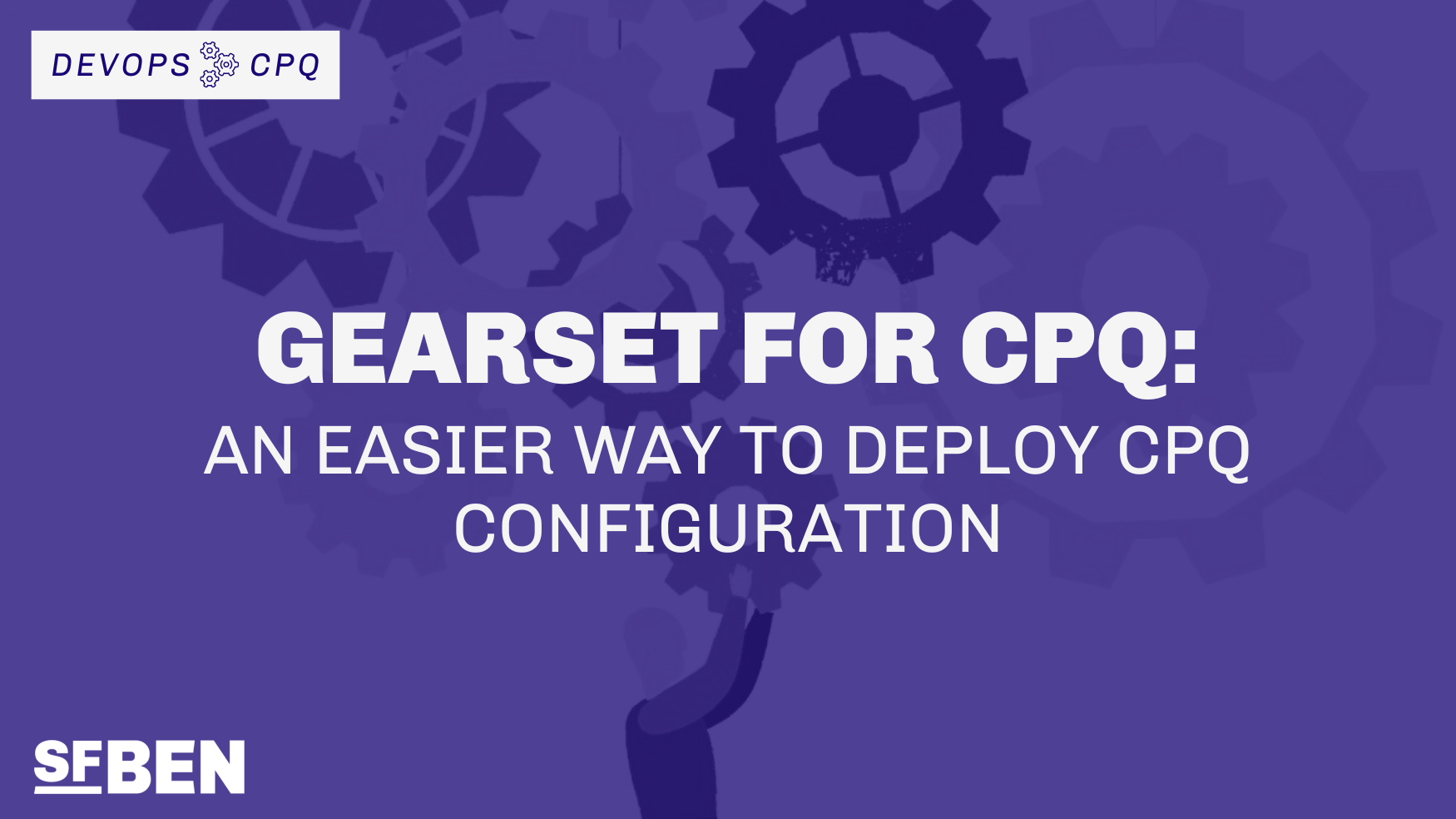 Holly is a Technical Author for Gearset, the leading DevOps solution for Salesforce.

Salesforce CPQ (Configure, Price, Quote) deployments are notoriously difficult. There are tools that offer out-of-the-box CPQ templates to help, and these go some way to mitigating the problem. But with Gearset’s latest release, CPQ deployments have been transformed.

Let’s take a closer look at what that means for your future deployments.

CPQ, Billing, and Advanced Approvals configurations don’t look and behave like other Salesforce customizations. They’re not just another set of metadata types – they’re not strictly metadata at all. That’s because CPQ was originally a managed package created by SteelBrick, which was acquired by Salesforce back in 2015. These solutions for creating highly configurable quotes, bills, and approvals, now comprise Salesforce’s Revenue Cloud.

Why are CPQ Deployments so Challenging?

CPQ configuration is represented by a complex model of dependent components that has traditionally been a huge pain to understand and migrate. What’s more, that CPQ configuration often has metadata dependencies as well. The result: a web of interrelated CPQ and metadata that needs to be handled delicately across two deployments – one for CPQ, one for metadata.

Deploying CPQ is much trickier than deploying metadata on Salesforce. When you deploy CPQ configuration, Salesforce creates new record IDs in the target org. So to keep track of everything across different orgs, teams typically add external IDs to their CPQ records. Managing these external IDs manually usually involves spreadsheets and Apex classes which require careful maintenance. Even with considerable time and effort, it’s all too easy to make mistakes.

The complexity and unique nature of CPQ deployments can create big challenges for Salesforce teams:

We wanted to create a deployment workflow for CPQ that matched the ease and intelligence of our metadata deployment solution. So, we built just that.

With Gearset for CPQ, you can compare and deploy CPQ objects in the same way as you would Salesforce metadata. Not only that, but you can also build a deployment package of both CPQ and metadata, running two deployments in one go.

What about matching record IDs? Gearset handles that for you, after a one-time setup with our external ID creation wizard. So you can throw away your templates, spreadsheets, and scripts!

Compare and Deploy CPQ Alongside Metadata

With Gearset, you can now compare CPQ configuration in the same side-by-side diff viewer used for metadata deployments. The user-friendly UI displays a comparison of your source and target orgs separated into new, changed, and deleted items. Easily spot your CPQ items by the ‘CPQ’ prefix in the metadata type column.

Clicking on a CPQ item will show all related components to make sure you’re including everything you need in your deployment package the first time around. Plus, every deployment package put together in Gearset goes through pre-deployment checks to highlight common issues that cause deployment failures, so you’ll never get bitten by missing dependencies again.

The pre-deployment summary page shows all metadata and CPQ configuration that will be included in the deployment package, as well as prompting you to give the deployment a name and notes for easy auditing.

Hit Deploy Now when you’re ready and Gearset will start deploying your metadata first. If the deployment fails at this stage, Gearset will halt the deployment, roll back any changes made, and not start the CPQ deployment. This means your org will be returned to its pre-deployment state, so you don’t have to unpick a half completed deployment.

As soon as the metadata has been successfully deployed to your target environment and any tests have been run, Gearset will deploy your CPQ configuration. Once the deployment has completed, you’ll get a full breakdown of every item deployed including a direct link to each record. This summary will also be available from your deployment history, giving you a full audit trail of every change made through Gearset. You can also roll back any deployment of changed CPQ items.

Some things have to be seen to be believed, and painless CPQ deployments might be one of them! If you’re finding it hard to imagine, try the new workflow for yourself on Gearset’s free 30-day trial.

One thought on “Gearset for CPQ: An Easier Way to Deploy CPQ Configuration”