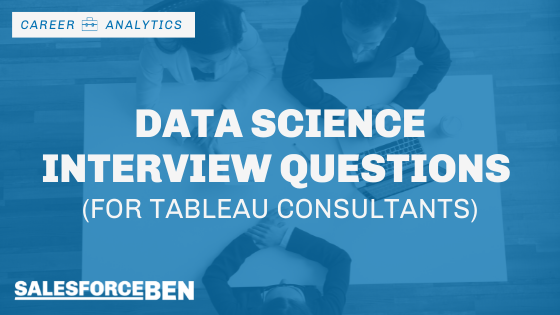 The growing prominence of Einstein and Tableau certainly suggests that analytics, data science, and business intelligence are important to where Salesforce architecture is heading. Statistics are everywhere in Data Science and the principles of statistics underlie Tableau CRM and Einstein Discovery.

With that in mind, the following are some questions about statistics you may be asked in a data science job interview.

As Randy Sherwood states in his Einstein Discovery instructional video:

2. What does confidence level mean?

Confidence level is a measure, expressed as a percentage, of how certain a sample statistic includes the population parameter.

Standard error is an estimate of standard deviation. It is used when standard deviation of a sample or population is not known, which is the case with the example in this article. It serves as a measure or indication of spread and variability in a data set.

4. What is margin of error?

The formula for computing margin of error is the critical Z-value times standard error.

The critical z value is more pedantically known as ‘Z-Alpha over two’. Find details in any statistics textbook.

The margin of error is expressed either in denomination(s) of standard error, or as a percentage. In this example, 18.5 per cent of the sample used Salesforce, plus or minus:

R script: The preceding computations and calculations are in the following R script. It is here for those of you interested in verifying the math. Paste this command sequence into R and run it from the command line in R Studio. The same figures used in this post will show.

# Margin of error for 95% confidence level

Some of you reading this may come up with figures that differ from what is here, by as much as .05 per cent, depending on whether you are using an online calculator of confidence interval, a scientific calculator such as a TI84, a statistical program such as R, Matlab, or Python; or just doing it by hand. It also depends on the method being used, which may include 1propZint, wilson, bayes, cloglog, or some other method.

5. How do you determine sample size for an experiment?

The formula for margin of error is E =

Algebraically isolate n in this expression and the result the formula for sample size:

There are three variables in the resulting expression to consider:

When estimating sample size it is important to qualitatively understand the nature, goals, and objectives of the study:

The most commonly used confidence level is 95 percent which corresponds to a Z score of 1.96 standard deviations. Other common confidence levels are cited above in the table of Confidence Level and Critical Z Values

6. What is Hypothesis Testing?

A hypothesis is a tentative claim about a population made in order to draw out and test its logical or empirical consequences.

Hypothesis tests can be used to evaluate one of six conditions. These six conditions are inference about population mean, proportion, or standard deviation:

Statistical tests are then conducted to determine whether the null hypothesis can be rejected.

The p-Value is a key element of hypothesis testing. It is a percentage value representing the probability of achieving a similar result if the null hypothesis was proven statistically to be true. A small p-Value means there is a higher probability of rejecting the null hypotheses. If the p-value is small there is a difference. Typically “small” is defined as less than 0.05, or five per cent.

10. How do you detect outliers?

The term outlier is often applied to any data value seemingly far from the mean, sample proportion, or median of a data set. This is a reasonable common-sense interpretation of outlier. Statistics textbooks give outliers a quantitative definition and an equation.

To determine if a data value is an outlier:

The data set is now sequenced in four quartiles. Each quartile has about the same number of values, depending on whether there is an even or odd number of values in the data set. Values at the quartile boundaries are called Q1, Q2, and Q3. The absolute value of the difference between data value at Q1 and Q3 is the IQR, or interquartile range. Values in a data set less than Q1 – 1.5 * IQR or greater than Q3 + 1.5 * IQR are outliers.

“Unusual” is a statistics term often used in the context of analyzing outliers. An unusual data value is not the same as an outlier. Unusual also has a standard quantitative definition in Statistics. A value in a data set is ‘unusual’ if it is more than +/- two standard deviations from the mean.

By way of summary, these definitions and equations answer the original questions in abbreviated form. These are the types of answers that a job interviewer probably wants to hear:

Other principles of statistics in Salesforce Einstein

What is a t-Test? Answering this question in full takes more room than this article will allow. Suffice it to say that t-Test is a statistical probability test applied when sample size is ‘small’ or the standard deviation is not known. This is often the case when trying to determine probabilities using ‘real world’ data from an Einstein dataset. It is relevant to Salesforce because it underlies probability calculations in Einstein Discovery. This is explained in the Randy Sherwood video.

Check out some of our other Salesforce interview questions below…

Previous Post: Teen to Trailblazer – How to Break into the Salesforce Ecosystem
Next Post: What Does a Chief Revenue Officer Do?