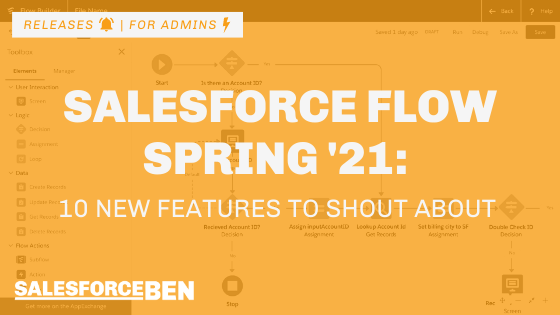 Every time the Salesforce release notes are published, I get straight to reading them because I can guarantee there will be updates to Salesforce Flows.

The Spring ’21 release has new improvements – and plenty of them to shout about! Here is the summary of all that’s coming to Flows.

I’ve said it before (and will repeat it until it becomes the common truth): Flow will soon be the ONLY tool that a functional Admin uses to create Salesforce automation.

Flow is adopting features from other Salesforce automation tools left, right, and centre. Today, you can set time-based actions from within a Record-Triggered Flow, exactly like Process Builder can. This was a gap that Flow had that stopped a lot of my colleagues and clients from shifting to Flows completely.

On the Start Element of a Record-Triggered Flow*, you’ll see a ‘Scheduled Paths’ option, similar to the below.

Note: this is only available in Freeform layout, not Auto-Layout as yet.

From there, you can configure multiple scheduled paths. In this example, I’m sending an email a week after the Send Date of the first on a custom object called Scheduled Email.

This is a major step in the right direction, enabling Flow to replace Process Builder almost completely.

Screen Flows allow user data to be collected and used in a Flow. Now in Spring ’21, admins can configure smarter screens and make use of wider monitors by adding columns into a Screen. The new Section component is a configurable layout that allows up to 12 columns to be added to a page.

3. Prior Value in Record-Triggered Flows

As mentioned by Rakesh Gupta, this will be particularly helpful when working with Multi-Select Picklist fields.

Rich Text email templates (saved as a Text Template variable) can be used within the Send Email action!

Simply customise your text within the Text Template, and populate it into the Body field to use it as the email body.

You can read more about this update here.

Lengthy Flow emails are about as fun to read through as unsolicited spam. Now you can skip the clutter and be taken straight to your Flow in Debug using a link at the top of the email.

Your Flow will launch with the same data that was used when the Flow Error occurred and will be launched in Debug Mode, allowing you to quickly see the issue and ideally resolve it.

6. Debug on Canvas for Scheduled-Triggered Flows

Scheduled Flows can now be debugged live on the Canvas – simply click Debug on Canvas after saving your Flow and choose if you want it to run in rollback mode (recommended for testing) and begin your debugging.

Previously, to remove a Flow Version that was installed from a first-generation managed package you needed to uninstall the package in its entirety. Now it’s as simple as confirming that the Flow Version is inactive, there’s a more recent version of the Flow created, and it doesn’t have any associated paused interviews. Then you can delete the Flow Version without uninstalling the rest of the package.

Flows called from a custom button or link, a direct URL, the Run button in Setup, or the Debug button in Setup will now push the Flow’s Label into your Browser Title instead of the unreadable Flow URL. Handy for identifying which Flows you have running!

When a user is navigating through a Flow and they use the Previous or Next buttons to go forward and backwards between screens, the previous Flow behaviour meant that the values the User had previously input were still there, which could sometimes cause issues. In Spring ‘21, you can control how this behaviour works on a Field by Field basis.

Null is always null… as it always should have been! Previously when a Flow ran and there was a formula pointing to a null value, it would SOMETIMES return null and SOMETIMES return an unhandled exception, depending on how the null was involved. Going forward a null will always be output when a null is involved ensuring a much neater user experience and a simpler debugging experience for the admin.

There you have it! Those are the 10 new Salesforce Flow enhancements to note in Spring ‘21 – some signaling major steps in the right direction for Flow to replace Process Builder almost completely as the default automation tool of choice for Salesforce admins.

Previous Post: How to Become a Salesforce Consultant at any Age: My Trailblazer Journey
Next Post: Do You Feel In Control of Your Workload? Here’s What Other Salesforce Professionals Think