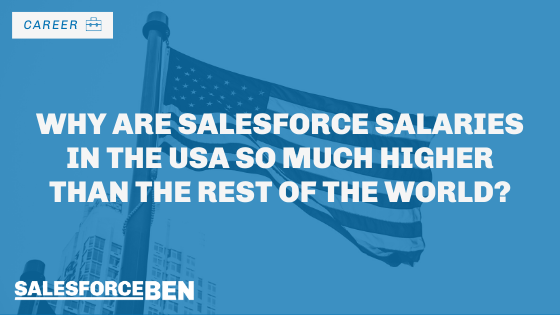 I’m sure that it’s not news to people reading this post that salaries in the USA are considerably higher than countries with equivalent economies elsewhere in the world. If you check out our latest Salesforce average salaries infographic, you will see that a Salesforce Consultant makes 60% more in the USA than their equivalent in the UK. If you’re looking at Salesforce Admins, that figure rises to 75%! This also isn’t restricted to just the Salesforce industry, if you check out glassdoor, the average salary for a software engineer in San Fran at Facebook is $165k, in London, this drops to £84k. Adjusted for the currency this is a 50% increase and is very similar across other large technology companies.

But what’s the reason? It’s become a common question and topic of conversation on the site in the comments section, as from a quick glance, it is a bit baffling! For the purposes of consistency, I’m going to be focussing on the USA Vs UK market in this article. For a full break down of salaries in other countries, please check our salary guides for Salesforce Admins & Consultants. You will also find that while there are slight differences between countries such as Germany, Australia, France, and the UK, they are a lot smaller in range.

The overarching reason why US salaries are so much higher than the rest of the world comes down to supply and demand. There’s no doubt that the US is a powerhouse when it comes to technology, with companies such as Apple, Microsoft & Amazon all hovering around the $1 Trillion market cap mark. In addition, you have companies such as Airbnb, Facebook & Uber that have become the leaders in their respective domains. As companies become more reliant on technology professionals, demand increases, supply goes down, and the salary that individuals can command goes sky high.

To support this demand for technology professionals, VC investment in the US is the biggest in the world. In 2019 the UK tech investment scene saw £10.1bn being pumped into companies, in contrast, China saw £33.5bn, with the US saw over three times that with £116bn. Even with the US being around 5x the size of the UK, this is a substantial amount of funding to the world’s technology leader.

In technology hubs such as New York or San Francisco, due to the increase of tech professionals flooding the cities, the cost of living is massively increased in comparison to London. So this is not necessarily a reason why salaries a higher, but a result of increased demand. You can expect rent prices in New York to be 55% higher than in London, and 77% higher in San Francisco! This is very similar for most other items such as consumer goods and groceries.

The US has been establishing themselves are the driving force behind the technology scene ever since the dotcom boom, and this trend sees no signs of slowing down anytime soon. This has given technology professionals the ability to command much higher salaries, as the companies they work for, and the economy, rely on their skills so much. But how does the salary translate to your pocket and living your life? Well the US has some of the highest purchasing power in the world, meaning you get more bang for your buck with every $ you earn. With the US in #2 place, this is 18 places ahead of the UK sitting at #20. Therefore if money is a motivating factor for you, you will earn a lot more of it in the US.

However, with the abundance of benefits working for a US company can bring, there are some downsides in comparison to European companies…

Previous Post: How to Prevent Competitors From Receiving Your Pardot Emails
Next Post: The 1-Hour Salesforce Data Quality Assessment Exercise

3 thoughts on “Why Are Salesforce Salaries in the USA so Much Higher Than the Rest of the World?”