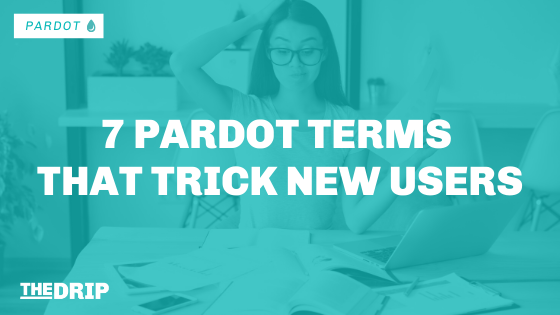 Learning Pardot wouldn’t be possible without understanding key concepts and terms. Every tech industry loves a buzzword – and Pardot is no exception.

There’s a strong argument that people responsible for training Pardot users should make learning the terminology a key part of the onboarding process. In fact, I added this knowledge gap as a key reason why I believe Pardot user adoption falls short.

Avoid getting bogged down in the jargon by building a glossary of the most common ‘gotcha’ terms in Pardot and Salesforce marketing. Here are 7 potentially confusing terms I picked out.

These two terms that describe a prospect’s mailability may sound similar but when it comes to sending emails, there are very different implications.

While Pardot has built-in measures to keep you compliant, knowing the differences gets you thinking about your own marketing automation tactics and operations in terms of potential reach, conversion estimates, and how to approach archiving data. See this guide for the full details.

The very word ‘Prospect’ throws people off because a Pardot prospect can be a customer (ie. a contact in Salesforce related to an account with type ‘customer’). There’s a learning curve involved to enable users to segment between customers and prospects in Pardot.

Lead lifecycles vary between each organisation due to the stages/statuses involved, and that organisations use different criteria that decides when their leads cross from one stage/status to the next.

Popular examples of ‘conversion’ in the lead lifecycle include moving from ‘MQL’ to ‘SQL’, or when a Salesforce lead record is converted into a contact and account.

Enter Pardot, and we are using the word ‘conversion’ to describe the moment a visitor becomes a prospect (ie. going from unknown to known by collecting email address at the bare minimum).

Thanks to Kristina for pointing this one out!

There was a period of time when everything new in Pardot centered around ‘engagement’, which lead to a few features sharing that word in common.

Engagement History is the activity that prospects generate when they interact with Pardot marketing assets. It’s the replacement term for ‘prospect activity’, only that it’s stored in Salesforce (not Pardot). You can view Engagement History on the individual lead/contact level, or at the campaign level. 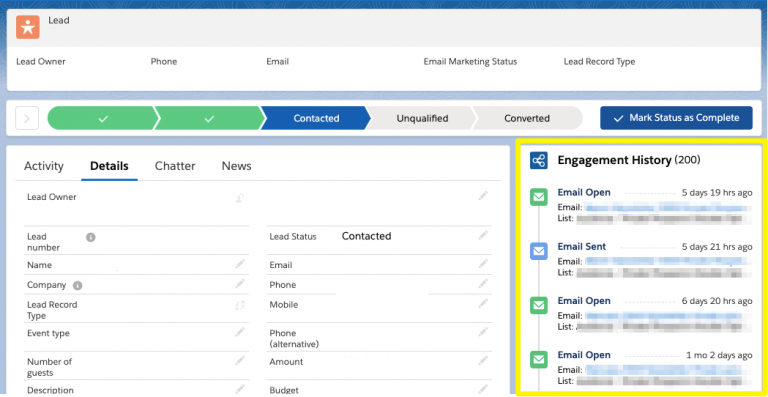 Engagement Metrics show how marketing assets performed overall. On any one campaign, you can view aggregated metrics such as email open rate, email click-through rate, or the total number of emails delivered related to that campaign.

The confusion is that both have similar names and sound like they display the same metrics at first glance. Plus, both are components on Salesforce page layouts which need to be added by an Admin in order for users to take advantage of them.

Salesforce Engage is a Pardot add-on product that was born out of a mission to bridge the gap between marketing and sales. You could say that it’s the Salesforce sales user’s window into relevant marketing information in Pardot, allowing them to launch Engage Campaigns, removing the need to craft personalised emails.

While Engagement Studio is for marketers, Salesforce Engage is the salesperson/BDR’s remit. One is a feature, the other is an add-on product. With similar sounding names, it’s easy to get confused!

Now that creating emails to use in Pardot involves the Content Builder in Salesforce Lightning, ‘CMS’ will be an acronym popping up more. CMS stands for content management system, typically referring to the platform that enables you to build and publish a website without involving coding.

Salesforce CMS, a product in its own right, is now an integral part of the Pardot Lightning Email Builder, playing a role in storing files (images, PDFs) that can be used in emails. For newcomers, you should outline what Salesforce CMS is to ensure that everyone is on board with the distinction between the CMS you use for your website and where you store your images for Pardot emails!

‘Campaign’ can mean many different things. Traditionally, it’s been a word to describe “what the marketing team does”. We all know how many forms a campaign can take, distributed over countless channels.

Thanks to Kristina for pointing this one out!

Whenever I learn a new platform, I create a glossary to define the various terms so I can get a handle on how the system works in both data and automation terms. Avoid getting bogged down in the jargon by building your own glossary of the most common ‘gotcha’ terms in Pardot and Salesforce marketing.

I am sure there are examples that you have picked up as you have got to know both Pardot and Salesforce. Which ones have tripped your users up?

Previous Post: HubSpot vs Pardot – What are the Differences?
Next Post: Which Salesforce Marketing Cloud Certification Should I Pass First?