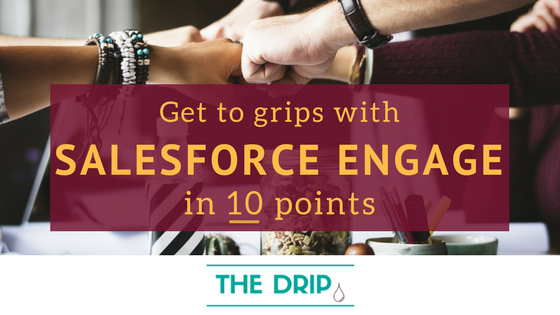 Salesforce Engage is a Pardot solution on a mission to bridge the gap between Marketing & Sales. You could say that it’s the Salesforce sales user’s window into relevant Pardot information, aiding transparency across teams.

Since being released (Summer ‘15), Engage has received a mixed bag of response: those who love it, and those who don’t yet see the entire value of the tool. If you are a little perplexed about what this Pardot/Sales Cloud add-on actually is, here are 10 things about the Engage tool that will get you started.

Sales know who they want to target at a granular level. Prospect filtering means that Sales can select Prospects based on data collected and stored inside of Pardot that, without Engage, only Pardot users would be able to utilise.

A user can filter at 3 levels:

Filtering prevents Salespeople from ‘blanketing’ an unnecessarily large audience with irrelevant comms. A good example: a personalised invitation to a networking dinner for those Prospects located in London, who attended a recent webinar.

Once Sales users have done their filtering, they are able to construct and run their own email campaigns for the target audience.

But what is so special about this? As I said previously, Sales know who they want to target at a granular level as part of their personal pipeline strategy. Personalisation to the masses is effortless, leveraging Pardot Variable Tags (ie. merge fields). Everyone uses the same marketing-approved email templates and content – not the old branding that someone rogue found in the depths of their computer. As well, it then takes the burden off the marketing team, who now don’t have to keep executing the same, monotonous email campaigns. 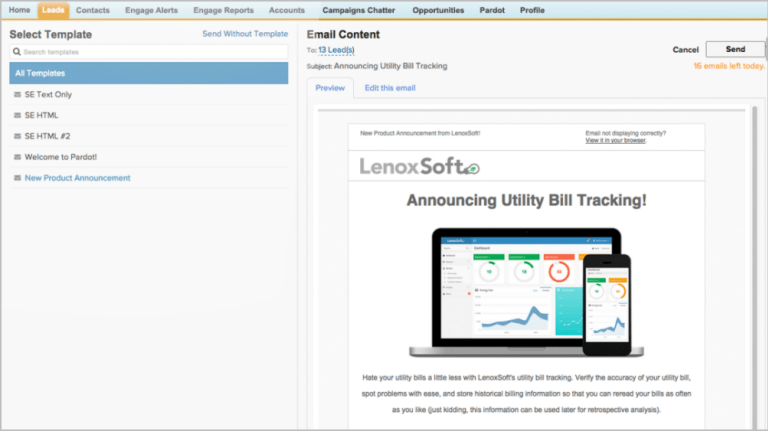 Lead nurturing becomes a joint effort – but, it’s a collaborative cross-team effort that doesn’t cause miscommunication. At the end of the day, people won’t treading on each other’s toes.

Sales users will be able to see exactly what their assigned Prospects have been up to. Pardot is able to track email interaction and web behaviour (page views, downloads, paid search clicks etc.) which gives Sales an added layer of intel* they never had before.

*Note: creepy if used with the wrong approach!

In addition to being able to see exactly what their assigned Prospects have been up to, ‘Engage Alerts’ can be pushed to Sales users right under their noses (when they navigate to the ‘Engage Alerts’ tab!). These draw attention to key action/interaction a Prospect has had with some company communication (eg. email) or collateral (eg. PDF download). At the same time, these concise alerts are a safeguard for preventing information overload for stretched Salespeople. 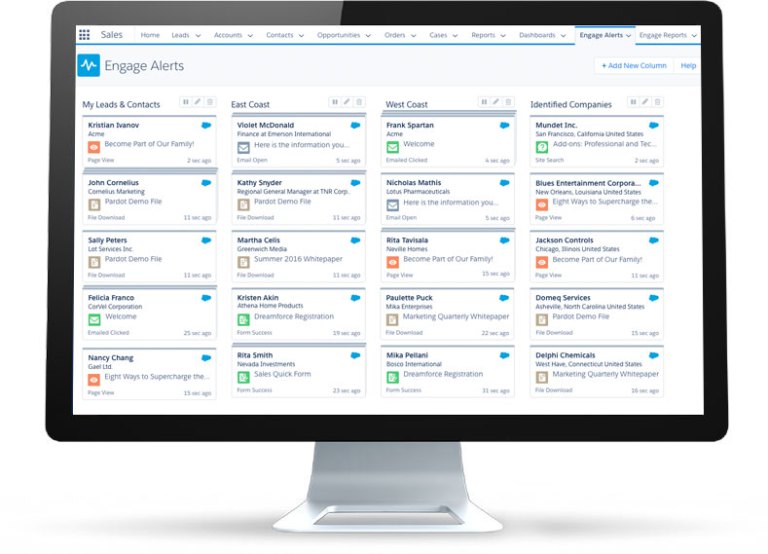 The user interface of Engage is a key selling point, in my opinion.

Engage Alerts are arranged on a card-based column view. The columns are filtered by specific criteria (Point no. 1), editable without System Admin intervention. Alert Cards get piled up by Prospect (depending on column filters) with the most recent on top – a nice visualisation touch.

What’s more, icons used throughout make each different interaction type for ‘at a glance’ identification.

Engage functionality is available mobile through the Salesforce1 app, officially called ‘Engage for Salesforce1’. Users have access to the past 4 days of Prospect Activity – a sensible move to scale down information. Engage is suddenly mobile-optimised, with the added ability for Admins to define different Filters and Actions versus those on the browser. It depends what makes sense for your mobile-heavy users. 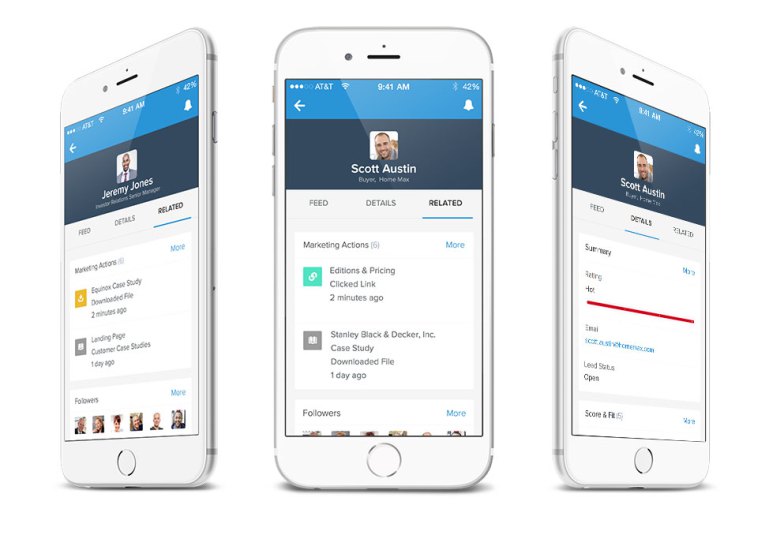 Emails go from being banal and one-shot, to trackable, well formatted and effective communication. The plugin allows you to track opens and clicks, and insert email templates straight from the email composer box (without having to leave Gmail).

NB: only available for Gmail clients (at time of writing) because the tool is a Chrome Extension. 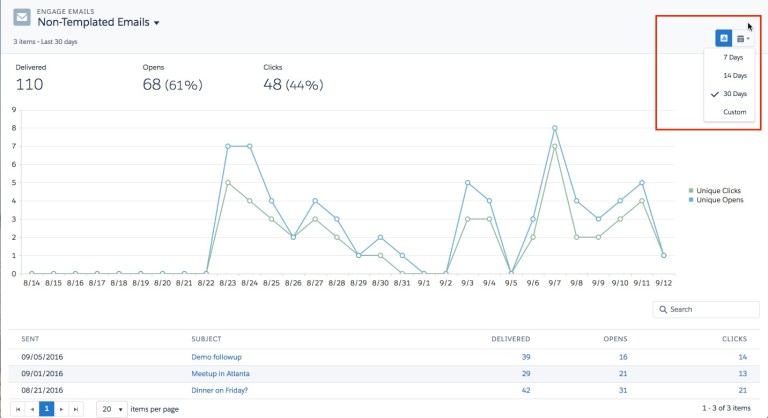 Users can see visual performance charts of their own emails, over any time frame.

Reports can also be generated (instantly) based on Templated or Non-Templated email sends. Also available are the recipient detail list views.

NEW: Engage Team Reports. Gives insight into email campaigns (ie. which email templates are producing the most interaction) at the team and individual level. Obviously, these team reports follow how your role hierarchy is structured, so best to have a conversation with your admin first so that you’ll see the correct ‘team’ data. More here.

It’s a well-known truth that Salespeople are busy, but sometimes organisations forget this fact when deploying new tools. Luckily, Salesforce Engage is a stripped back Pardot, reduced only to only relevant features and functionality.

To be honest, you don’t have to do much in terms of training – especially if they are already Salesforce users. Perhaps Sales will need to be shown the new ‘Engage Alerts’ and ‘Engage Reports’ tabs, plus maybe outlining how to filter and adding to nurture – but bar that you can send them on their way. Share links to the Pardot Knowledge Base, and of course, always keep your door open for questions.

Salesforce is a separate license from Pardot. Unlike the Pardot ‘bucket’ license, Engage Licenses are one per person. Pricing is transparent, at $50/user/month (at time of writing).

Once the licenses have been purchased, a Salesforce Admin will need to assign the licenses to the team, before they can get to work.

There’s plenty of new developments with this product – so keep your eyes peeled in the tail end of 2017!

I’ll be updating this post periodically to take in these new developments.