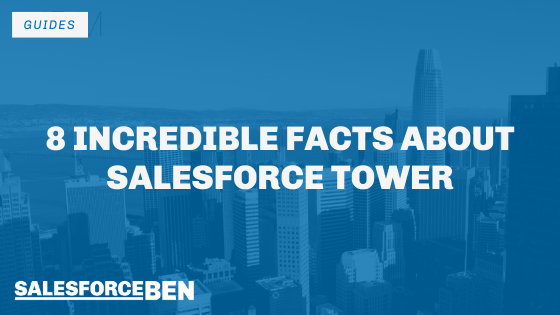 Helen Garcia is passionate about delivering change, striving to serve others by enabling recognition, inspection and adaptation as a team to drive organisational change.

Since 2017 when we first posted about the incredible Salesforce Tower, Salesforce have increased their revenue by another $7.1, taking them to a whopping $17.1B, but what else has changed?

Let’s go ahead and check out some most amazing facts about the momentous Salesforce Tower!

The Salesforce Tower still remains the tallest in San Francisco. Not only does it surpass The Transamerica Pyramid by 216ft, but it’s also the 17th tallest tower in the whole of the United States, and to put that in perspective that’s 17th of 5.6million[1] commercial buildings throughout the US. Even over the pond, beating our european friends Eiffel Tower by 7ft. Now that’s taking it to some heights!

Three years after the Towers completion, the initial estimate of the Tower being home to 10,000 employees has been hit, that’s a huge 20% of Salesforce employees based at the Tower in San Francisco. That really starts to give you an idea of the scale in which the Tower stands. And we thought we had a big family, where do all the Salesforce plushies fit!?!? 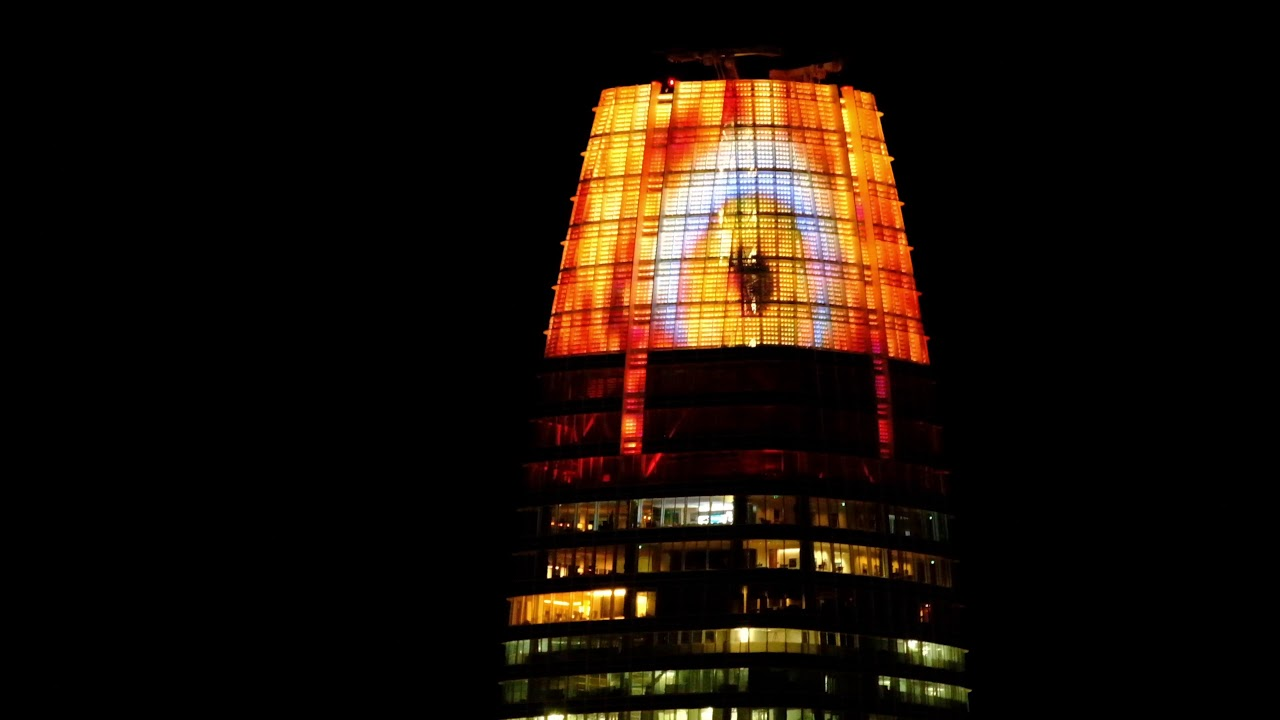 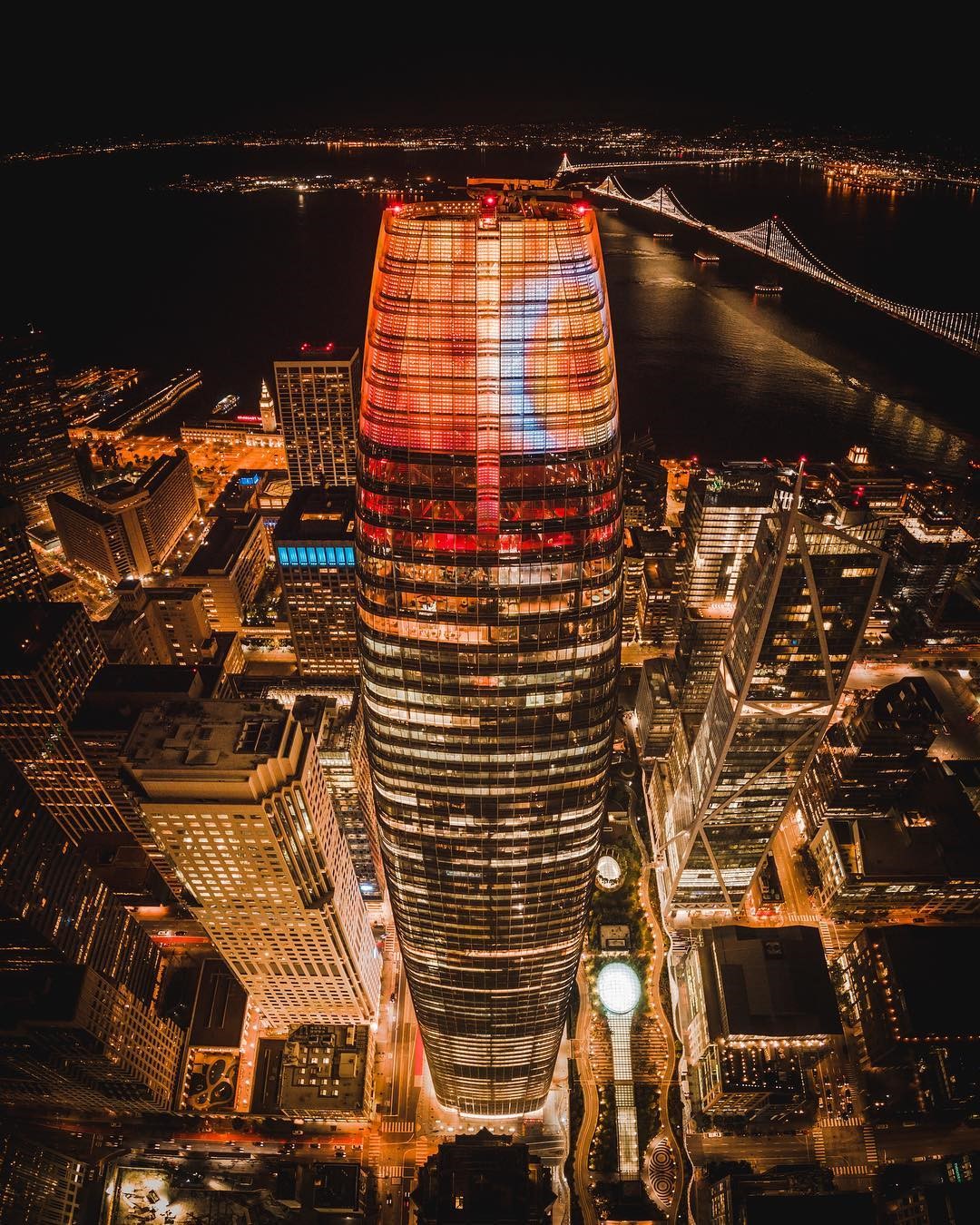 The Tower is not all about serious business, customer focus and plushy’s, Salesforce have also opened up it’s peak to artist John Campbell back in 2018.

And that was some pretty impressive nine story art installation with 360 degrees views from all over San Francisco, we reckon some UFOs may have spotted it too. This was known as “Day For Night”, inspiration coming from the daily lives of San Franciscans, which was recorded and then lit within The Tower by 11,000 LEDs that could be seen from up to 20miles away! And of course, in true Salesforce style, not only was this the tallest public art installation in the world…but it also had its own halloween outfit after a petition got Benioff’s attention: The Eye of Sauron. 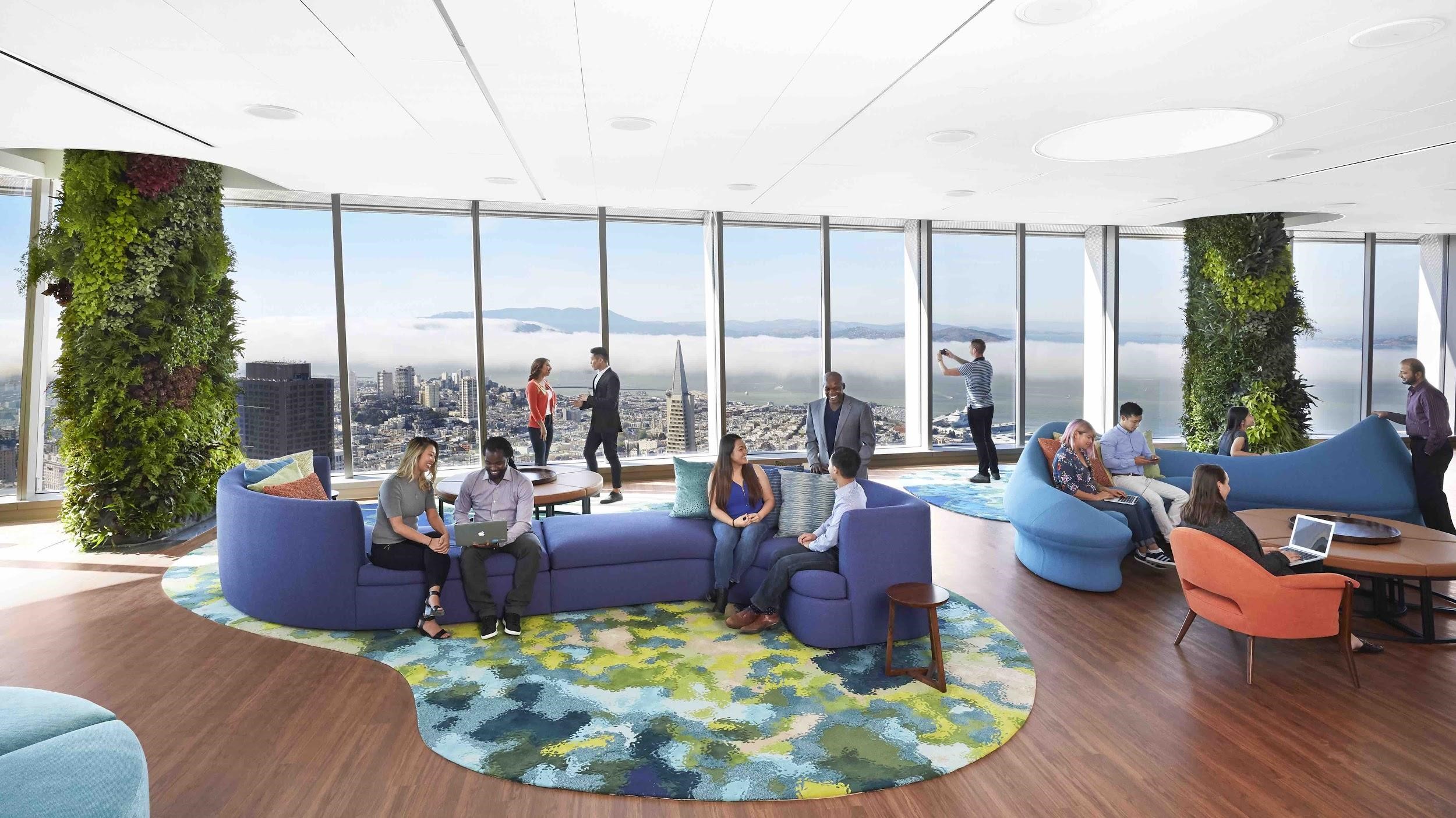 Standing by his word, Benioff kept floor 61 as a space for his Ohana. With beautiful views over the San Fran skyline it has been kept as an open space to be used as a meeting area during the day, and an event space in the evening.

Back in 2019, the Ohana floor opened up tours to the public, one Saturday a month, giving back to the community that serves the city itself.

And what’s better, is in 2019 Salesforce started allowing nonprofits and educational groups to use the “Ohana” floor for free! So if that’s you, check it out when it’s safe to do so and the doors are back open.

Let’s leave the fortune to Benioff, and look at the fame. The Tower isn’t just an extremely tall building in San Francisco, a home to the Salesforcian tribe but it also dabbles in a bit of acting. The Tower itself has made an appearance in two, yes two films.

First being ‘Big Hero 6’ a film about a robot building kid based in San Fransokyo (city merge, nice). The twist? The film was released in 2014 and The Tower wasn’t even born then! So San Fransokyo was at least 3 years in the future, that makes us wonder what 2023 brings us!

Going along  the superhero theme, and if fear factor is a little more your thing, check out, Venum a superhero marvel based in San Francisco and starring our beloved Salesforce Tower! 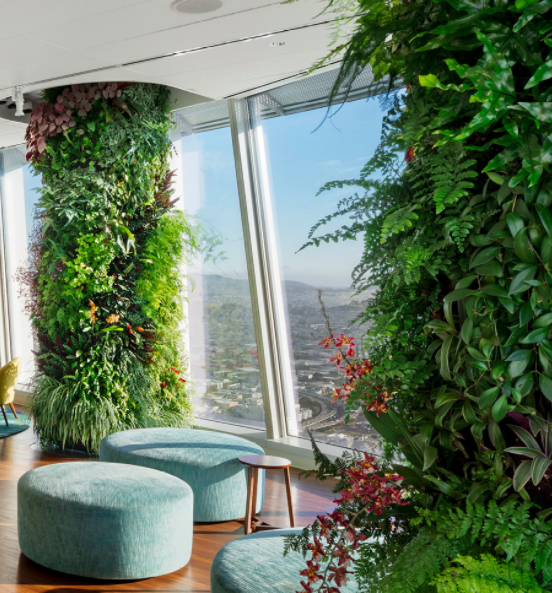 That’s right, 130 species, and counting, live within the Salesforce Tower walls. 128 species are of the plant variety, made up of 25,000 plants, covering 3500 cylindrical square feet! Thanks to David Brennerand the Habitat Horticulture, the Tower has been brought to life on a different level. So this takes us to two remaining species. One being the homo sapien and of course, plushies, ever felt like Astro’s staring at you?

Salesforce is leading it’s flexibility work and wellness programmes. Within the design process there were wellness spaces that enabled a fun, collaborative and sustainable working life, but let’s dig a little deeper into 2020. With 61 floors, 1762 steps, equal to a vertical 5k, Salesforce is challenging your wellbeing to it’s core. Staying healthy not just through it’s inhouse yoga sessions, relaxation areas (check out London’s: meditation room)  including a grand piano, but also giving employees the opportunity to not always take the lift. Move and the world moves with you!

So if you still haven’t made it to Dreamforce, or managed to blag a school trip to the Golden Gate Bridge, then here’s a sneak peak to enjoy it without leaving the safety of your home from home! Sit back, relax, and listen to the sweet sounds of the “Ohana”.

Previous Post: Host your Virtual Events with Pardot and Zoom
Next Post: How to Improve Salesforce for Higher Ed Using Web Forms