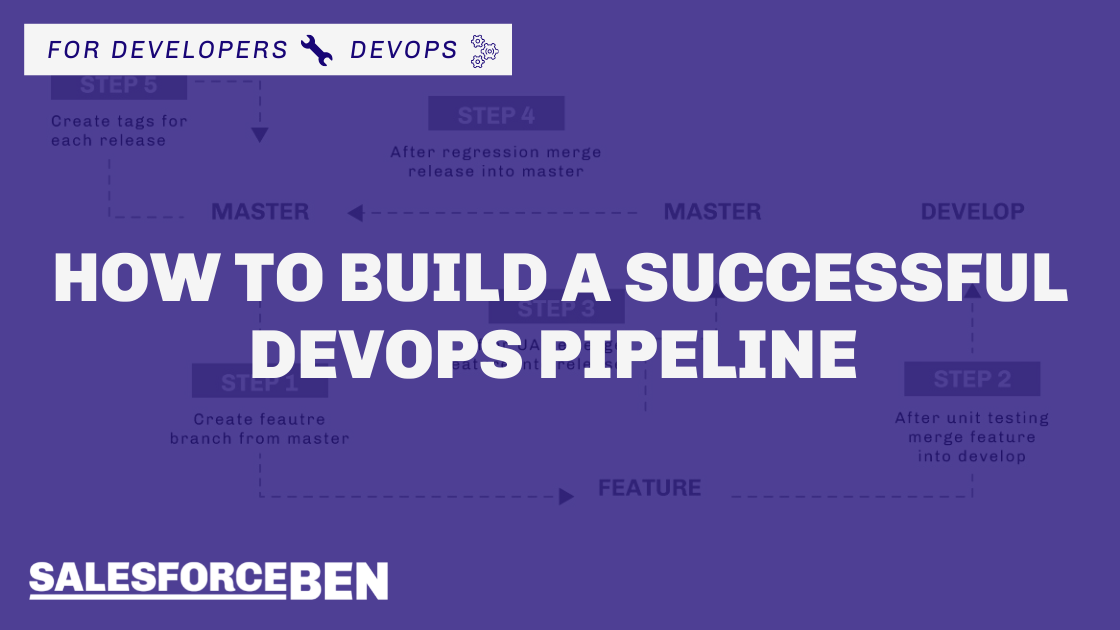 In “Salesforce DevOps: Learnings from 300+ Salesforce Deployments” I detailed my experience of using DevOps with Salesforce to deliver successful projects. We covered typical implementation models, as well as how to choose the right deployment mechanisms and the importance of version control. In this article, we’ll dive even deeper into lessons learned during my journey to build a DevOps pipeline.

What is a DevOps Pipeline?

A DevOps pipeline is a set of practices, processes and tools that teams (Development and Operations) use to build, test and deploy software. A DevOps pipeline ensures that software development is organized efficiently and thoroughly tested to avoid costly errors.

So, how did creating a DevOps pipeline become such an important part of my role, and why might you need one too?

My team and I were working on a project with an extremely tight and fixed deadline. The team was also working across locations and time zones so communication and working together was going to be critical to our success. We realized that our traditional deployment process of using Change Sets or ANT was not going to help us meet our strict deadlines. We decided we needed to build a DevOps pipeline that we could use in our day-to-day deployments.

A DevOps pipeline would help us to:

Tools Used During Our DevOps Implementation

Version Control keeps track of the changes made to the code; if there are any issues, version control helps us to compare the code base with the previous version, then locate and fix the issue. We used “Git” as our VCS since our customer had their other projects on Git.

A branching strategy is a convention, or a set of rules, that describes when branches are created, naming guidelines for branches, what use branches should have, and so on.
This was the toughest part in our DevOps implementation and I would like to highlight a few advantages of a good branching strategy:

Salesforce provides various types of environments to do development, testing, bug fixing and so on, which are called sandboxes. Every Salesforce customer, based on the implementation complexity, uses sandboxes differently. It can be as simple as a single sandbox that is used to do development and testing and it can be complex with multiple orgs used. In our development lifecycle we have 5 different environments wherein each has its own purpose. These are explained below:

In our first round of iteration, we implemented DevOps as shown in the diagram below:

TIP – If it is only about deploying changes then what is the advantage of DevOps? That might be the question you have on your mind.

So, to answer that: the DevOps pipeline will not only do deployment; it can be configured to do a lot of things that are particularly important in SDLC:

After we implemented our first pipeline which helped us doing seamless deployments, it was time to enhance it to reduce some challenges that developers might face during deployment.

As explained above, based on our learnings we built a DevOps pipeline for Salesforce deployments. We then added some key features in our pipeline, outlined below, which helped us a lot during deployments.

Full deployment is deploying all the components in a branch to the Salesforce instance. Below are some key characteristics of full deployment job:

Incremental deployment is deploying only those components which are modified since the last successful commit was made to the target branch:

Why is this helpful? The Developer maintains a manifest file (package.xml) to maintain a list of his changes. When there is a need to do deployments from one org to another, those can then be used. With this feature, one need not worry about maintaining a manifest file for deploying changes in different orgs. Manifest files will only be required to commit his changes in feature branches. The DevOps pipeline will take care of the rest.

Salesforce deployments require successful execution of test classes and code coverage should be more than 75%. Salesforce gives us 4 options for running test classes while deploying our changes:

There are few questions that arise in developers’ minds about test classes:

Below are some considerations when running test classes.

2. When To Run Test Classes

We now maintain a set of component types for which the system should mandatorily run test classes. This set of component types can be modified based on our requirements. This will help us to avoid regression issues in the system which might be introduced by marking a field mandatory, adding a validation rule, unhandled exceptions in process builders on a core object, etc.

Unfortunately, it’s not uncommon for there to be changes in personnel during a project, and it’s impossible for a developer to be aware of all the touchpoints about the system. Having documentation will help the developer in understanding everything just by reading. In order to do regression/sanity checks, we maintained a set of test classes that should run for each deployment only if test class execution is required based on a previous feature. These test classes will make sure that changes do not impact the core of our system.

We have now added a feature in our DevOps pipeline which will find the list of test classes to run for this deployment. We also maintain a json file that has a mapping of a class and its test class which is used by our workflow to find test classes. You can provide multiple test classes for one class.

This is not the end! We are still enhancing our DevOps pipeline to add more benefits. A few examples of exciting plans, currently still WIP, include:

We have been working on this over the past year, during which time, we faced a lot of issues and certainly made some mistakes along the way! However, we are now proud to have our DevOps pipeline ready to go and continue to feel a lot of enthusiasm about our plans for future enhancement.