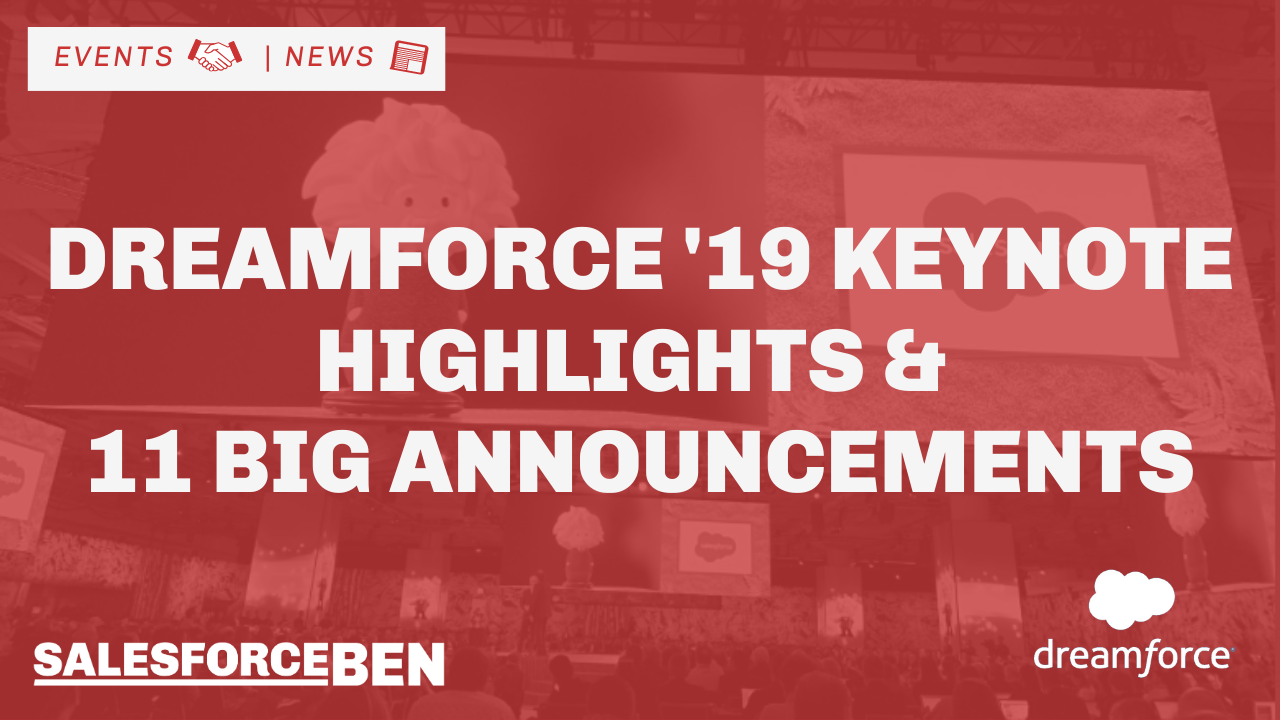 Dreamforce has kicked off with a bang, with the Opening Keynote “Trailblazers, Together”, hosted by co-CEOs Marc Benioff and Keith Block, and other special appearances. As predicted, the arena was at maximum capacity, with an additional 13 million viewers online viewers registered; plus, the spontaneous appearance from a protestor (to who Marc allowed 30 seconds of ‘free speech time’).

This explosion of Salesforce innovation never fails to impress; a quick count up totals to 11+ releases and enhancements dropped during the hour. An electrifying feature video introduced the first theme of connection – what we know as “Customer 360”. ‘Data’ comes as the second theme with Single Source of Truth (SSOT) becoming part of the architecture of Salesforce (think Mulesoft, Tableau, Einstein). Then, a segment on the theme of ‘Voice’ followed. Finally, as a bonus, we have also tagged on a couple related to Trailhead in this round-up.

Following the Bonobo acquisition earlier this year, Salesforce debuted their Call Coaching application today. Coaching is a core part of any sales manager’s job – research shows that companies that adopt a coaching program have a close rate 28% higher than others that don’t. 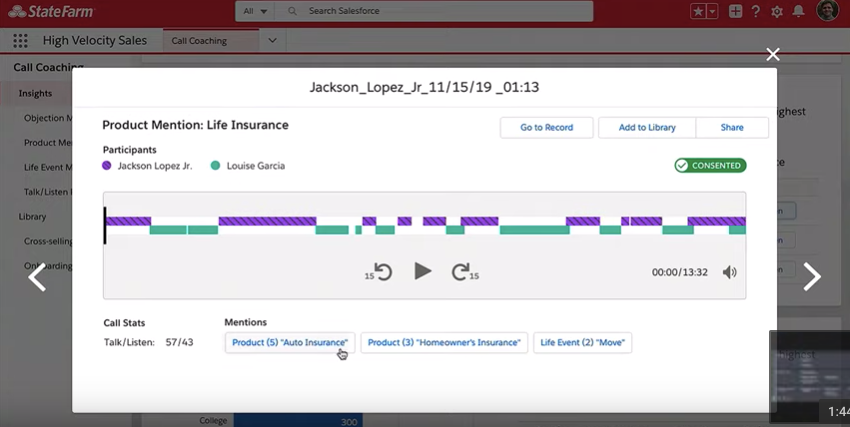 With Salesforce Call Coaching, AI analyses audio clips, and presents insights. You can see which products are most mentioned on calls by sales reps, objections that are raised and how they are dealt with, as well as how comfortable sales reps are handling calls. All this information can be used to improve sales rep performance, and each organisation can customise the application to surface what topics matter to them. See the official press release here. 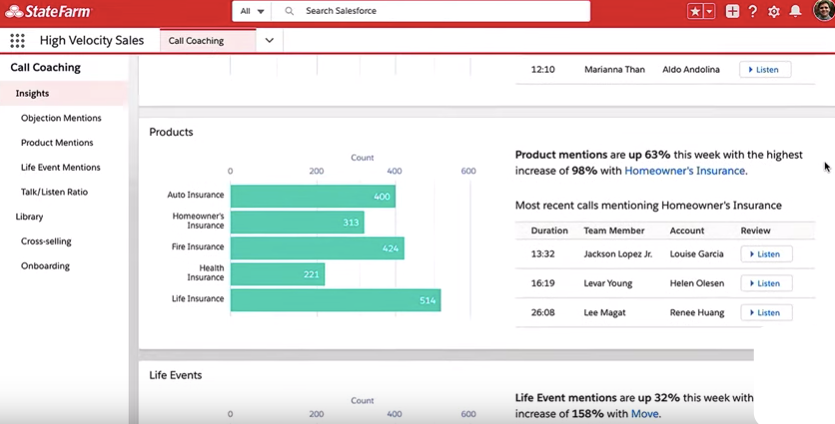 As well as the amazing potential of Salesforce Call Coaching, another complementary feature is Service Cloud Voice.

Calls are transcribed in real-time with Service Cloud Voice, allowing insights to be presented to the service agent. Using a flagship customer, State Farms, the demo involved a caller that had tree damage from a hurricane to report for a claim. While the customer was explaining his issue, an Einstein Recommendation surfaced Knowledge Base articles that detail the correct procedure for the agent to follow. This technology enabled State Farm to provide a faster resolution for customers – 31% times faster to be exact!

When the service agent came to log the call, the activity fields were auto-completed due to the transcription knowing the outcome of the call – plus, a Next Best Action suggestion came into play. 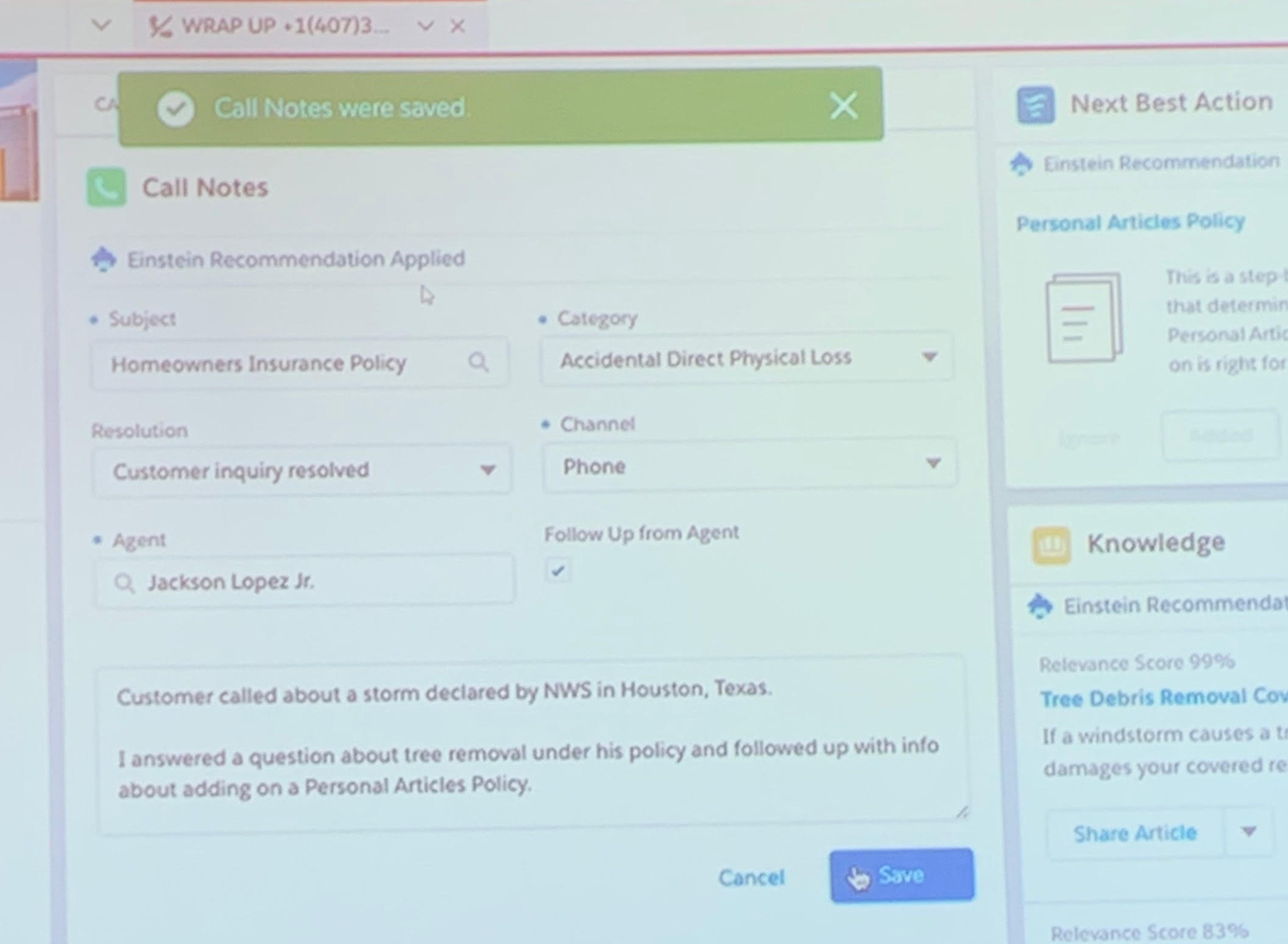 Service Cloud Voice, powered by Amazon Connect, is part of a new partnership from Amazon & Salesforce, breaking news announced only this morning. 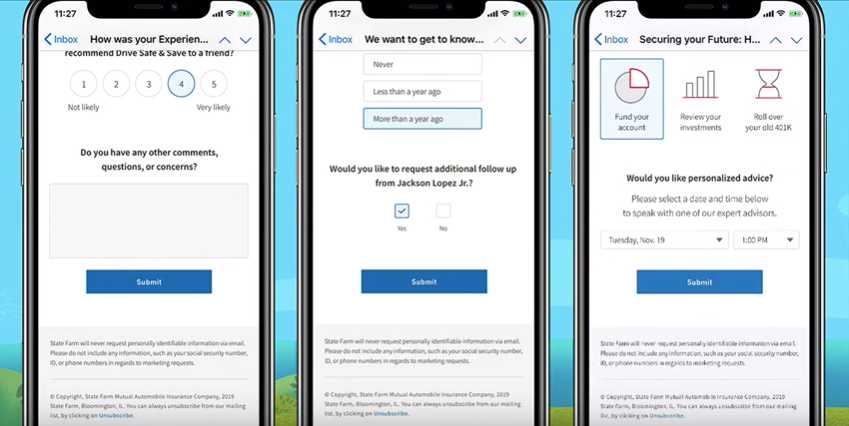 Email is not dead. While it’s true that email is not dead, it is undergoing a renaissance – Interactive Email opens the door to the next generation of email.

The perfect use cases for interactive email are post-purchase data collection or any customer survey. In a nutshell, it removes the friction between the individual and your database, because data capture happens within the email itself! This is how Interactive Email is able to collect 3x more data than traditional data capture methods.

Einstein Designer is a new page designer interface for e-Commerce sites powered by Commerce Cloud. In short, the interface allows for optimal personalisation for that specific browser on the site; multiple variations in how the product listing can look are weighed against each other, and the best fit for the individual browsing is displayed as a result.

How does it do this? There was a mind-boggling visualisation of how Einstein breaks up the components of the product listing, then clusters data from various sources to deliver insight on the best variation to use.

Showcasing Louis Vuitton (LVMH) with their Customer 360 transformation, both online and in-store. The optimal variation displayed would be different for the following 3 different personas: person a) has an appreciation for product details, person b) one that is only just aware of the brand, person c) a customer that recently purchased shoes, and is now browsing for a matching bag. 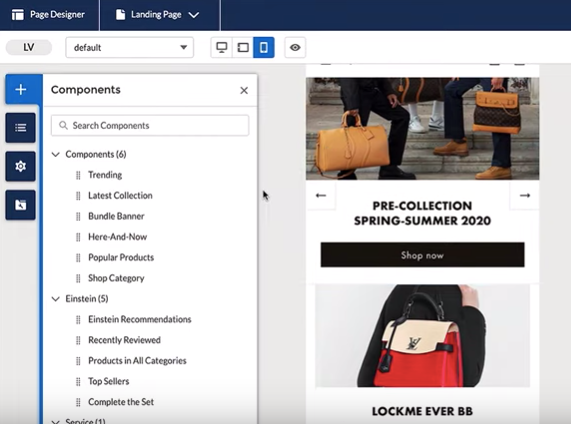 Customer 360 Truth Profile is the next chapter in the Customer 360 narrative; we could say that it’s Customer 360 Data Manager interface coming together with Mulesoft capabilities. ‘Truth’, shortened from ‘Single Source of Truth’ (more catchy than SSOT), will be woven into the fabric of the Salesforce platform – yes, an addition to the core platform, with no cost involved for Salesforce customers.

Customer 360 has the capacity to process 2 billion+ integration transactions for all Salesforce customers/day. During the keynote, the demo showed the compiling of data from multiple sources, which transformed “Input IDs” into “Customers”; 179k “Input IDs” → 88k unique “Customers” (shown below). This technology will take untangling data far, to paint a clear 360 picture of each customer. 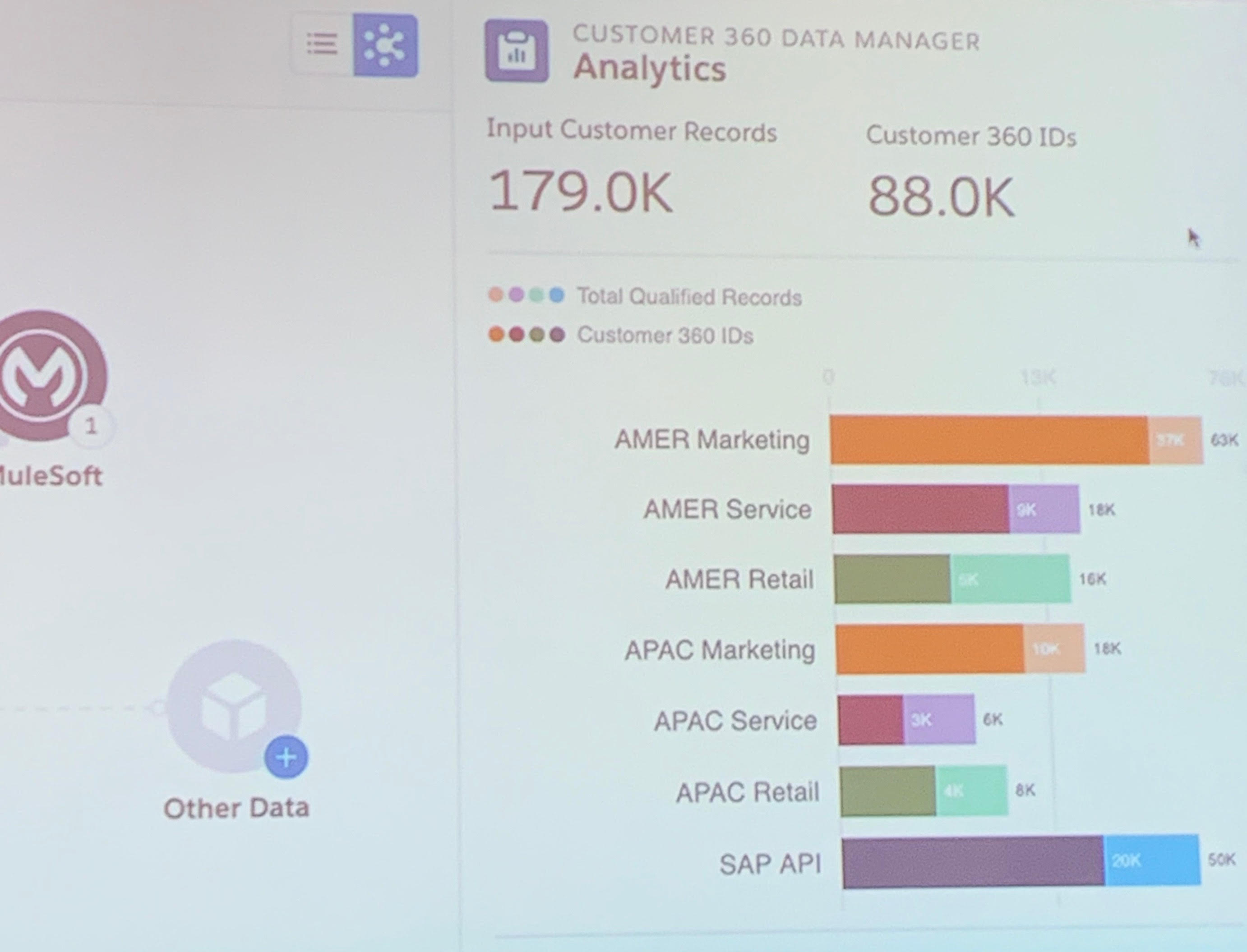 Another outcome of the Mulesoft acquisition, are Mulesoft Accelerators. An Accelerator is “a set of production-ready artefacts customers can extend or use to speed up the delivery of integrations, following an API-led approach” (source). 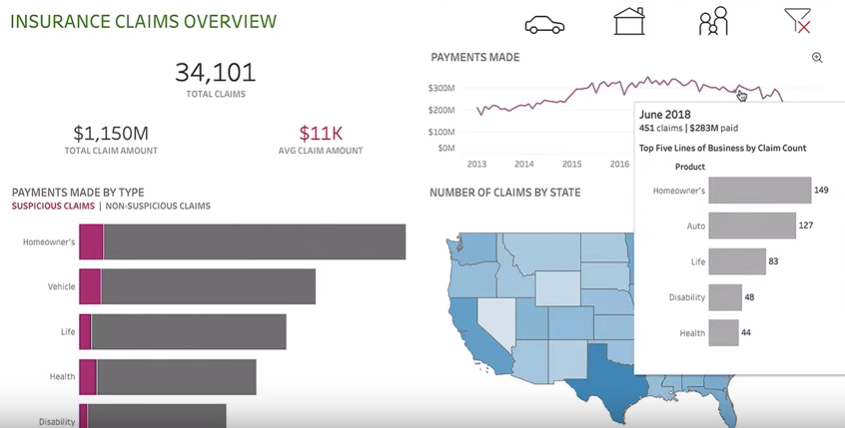 Salesforce acquired Tableau earlier this year, but haven’t been allowed to disclosure much on the deal due to UK anti-competitor legislation. The acquisition is exciting, but it was one that left many in the ecosystem puzzled when it came to speculating how the product would sit within the platform product offering.

Nevertheless, the message Salesforce is giving, is one where Tableau will service Enterprise-level customers. The demo showed “analysis at the speed of thought” – some cool data exploration, plus built-in question and answer, where users can type a question and receive an immediate answer.

Marc asked Parker Harris (in one of their classic Keynote skitches): “how can our customers’ customers talk to Einstein?”.

Voice recognition will have a big (if not the biggest) impact on Salesforce innovation in the near future.

In the initial demo, Salesforce’s Chief Scientists Richard Socher called up Adventure Rental Cars out of hours, and Einstein answered! Using Einstein Voice, Richard was able to extend his car rental over the weekend, due to it being out of hours, which talked him through security, and also providing him with an upgrade for being a Platinum customer.

The second part of the demo, we were introduced to the Alexa of Salesforce, a physical Einstein! You could ask Einstein “Alexa” like questions such as “How likely is it that I will hit my number this quarter”, and Einstein would answer.

This is all powered by the Einstein Voice Skills Builder, and allows you to actually build Einstein Apps that interact with Amazon Alexa, Siri, among other devices. 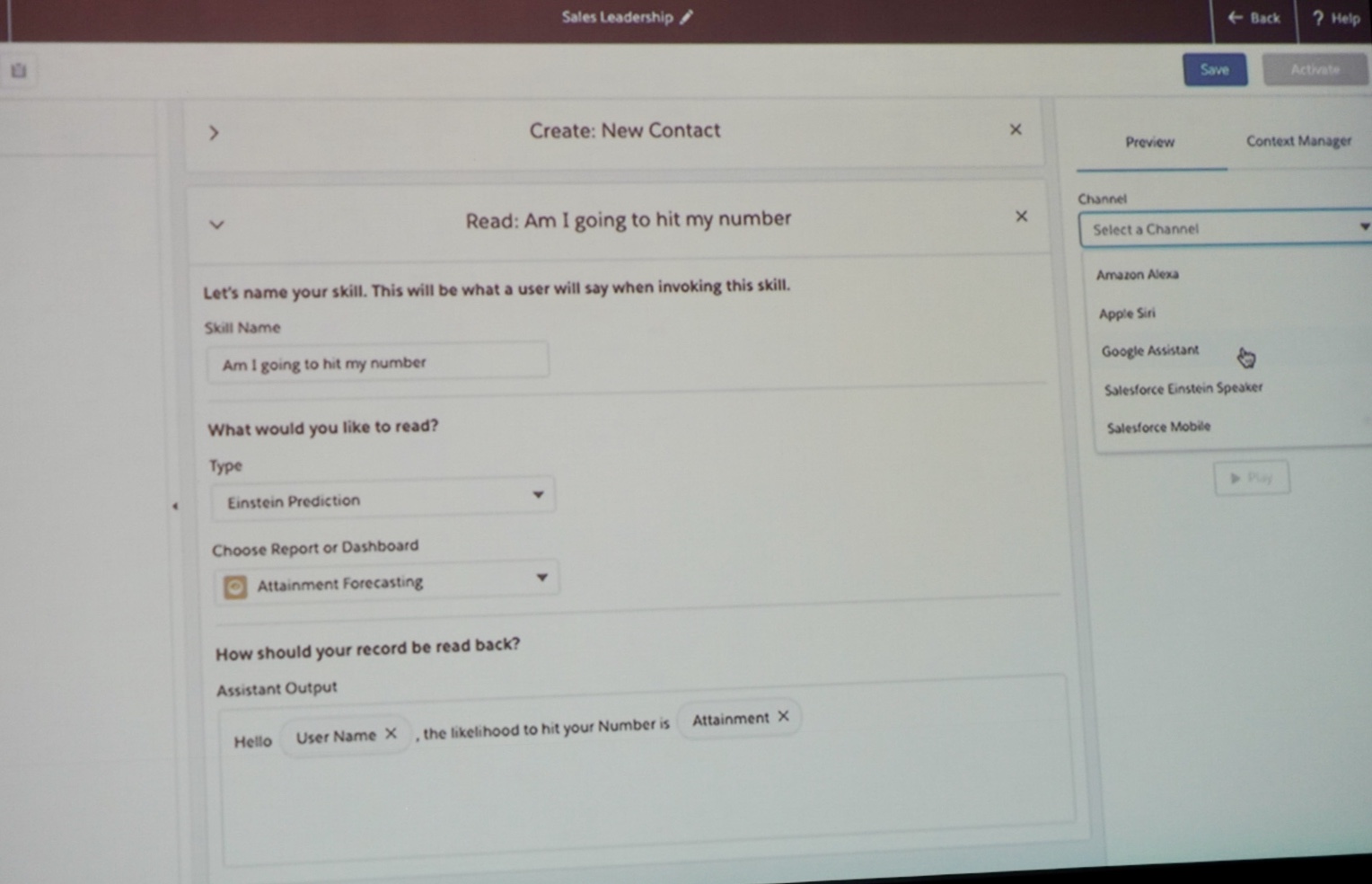 We took a first look at Trailhead GO only yesterday. We finally have a native version of our favourite learning platform, available on the App Store. This opens up access to skill development to a greater extent: “turn your commute time into classroom time…at softball practice? Learn some soft skills”, said the presenter.

Salesforce will offer new Trailhead trails for AWS skills, a result of the new partnership from Amazon & Salesforce (breaking news announced only this morning). 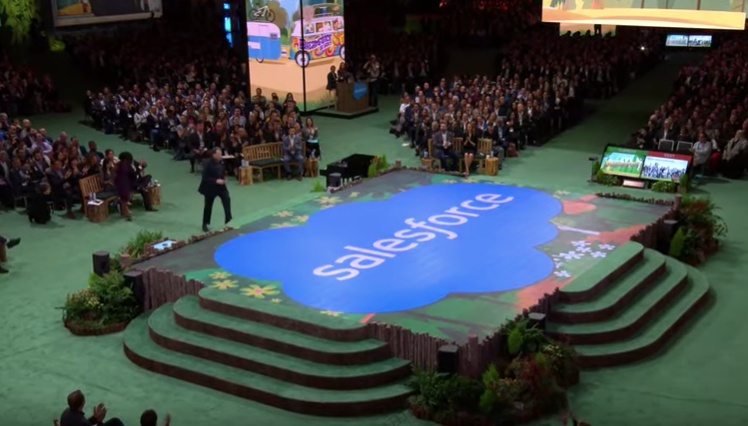 It’s clear that Salesforce is staying true to it’s core, of being one of the most innovative companies on the planet. Not only through technology and it’s the product, but through forward-thinking equality and inclusivity. What was your favourite moment from the Keynote?

Previous Post: Trailhead GO for iOS: A First Look
Next Post: What is a Salesforce MVP & How Do I Become One?