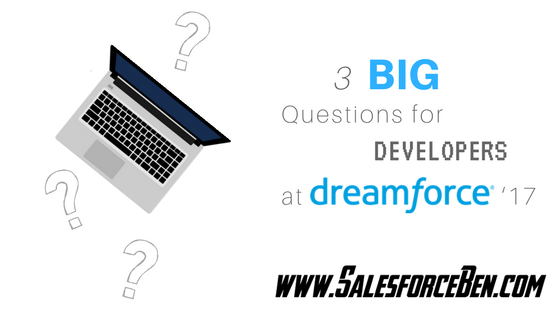 What are the big questions facing Salesforce developers at Dreamforce.

One year ago, I posted this controversial piece on Salesforce Ben’s blog: Is Salesforce Really the Worst Development Platform? A few days later, our question was answered when Salesforce announced Salesforce DX at Dreamforce: a new vision for how development would be done on the Salesforce platform. As we gear up for Dreamforce a year later, what questions are we hoping Salesforce will answer for developers in 2017 and forward looking into 2018?

When will DX be ready for primetime?

Since last Dreamforce, Salesforce developers have been able to participate in the Dev Preview and open beta of Salesforce DX. You can now check out Trailheads on DX, spin up scratch orgs and leverage the new Salesforce CLI to interact with Salesforce. You can even use the VS Code Plugin for DX to work on Apex.

We’ve used DX ourselves and have talked to hundreds of our end users about it. The consensus continues to be that DX is promising and exciting, but that very few have been able to establish a production workflow using it. At Dreamforce we’ll check out some of the talks on DX and we hope to learn what the roadmap is for DX and when it will be ready for primetime. They have many questions like: Will Salesforce DX improve the admin experience? Will I be able to use scratch orgs and sandboxes together? Is Salesforce abandoning Ant scripts and Force.com migration tool? How will new packaging affect ISVs?

If you’re interested in learning more about DX and having this and other DX questions answered we suggest Salesforce VP of Product, Wade Wegner’s talk, The Future of Salesforce DX on Wednesday at noon.

What is next for Lightning?

Lightning is in a bit of an interesting position. It’s been available for 3 years and it’s fully embraced by Salesforce implementation specialists and their marketing team. But candidly, adoption continues to appear slow. Most of our users have not adopted it, and it’s not uncommon for us in onboarding and training to see users continue to click the “Switch to Classic” button before proceeding.

Lightning was an exciting and refreshing technology change for Salesforce when it was announced, but it’s in a tricky position because some key design choices have not been popular. Many of the paradigms that have developers excited about tools like React, are not present in Lightning and places Lightning in an uncanny valley where it’s too new for many Salesforce end-users to adopt and yet also too old for many developers.

Will there be any new announcements about Lightning that will help facilitate widespread adoption? Will there be new features that make Lightning more like React or at least easier to use together?

We look forward to reading about it at the Lightning Roadmap for Developers session on Monday at 12:30pm.

When will Einstein be ready for developing complex apps?

The other big announcements for developers at involved Einstein – Salesforce’s new AI platform. In a remarkable parallel to DX, developers have been very excited about Einstein. There have been a number of great demos about how to integrate Einstein into various workflows. Developers have been able to experiment with the Vision API and start building simple apps.

However, we have not met many developers who have really been able to use Einstein for robust applications. We’re looking forward to hearing what new features, SDKs and APIs to expect in the coming year.

Hopefully many of these questions will be answered at Dreamforce. Fortunately, there are over 40 sessions specifically dedicated to Einstein development at the conference. We recommend checking out the Einstein Platform Services Overview on Monday at 8:15 to get a better sense of what other sessions you might want to check out.

One of Salesforce great qualities is that they are open and transparent about their roadmap. They do a great job of answering these kinds of questions and responding to user feedback. One of the best parts about Dreamforce is the opportunity for developers and admins to learn about what is coming and how to prepare for it. We’re looking forward to getting answers to these questions and more, as well as hearing everything else that Salesforce has in store for 2018. See you at Dreamforce!