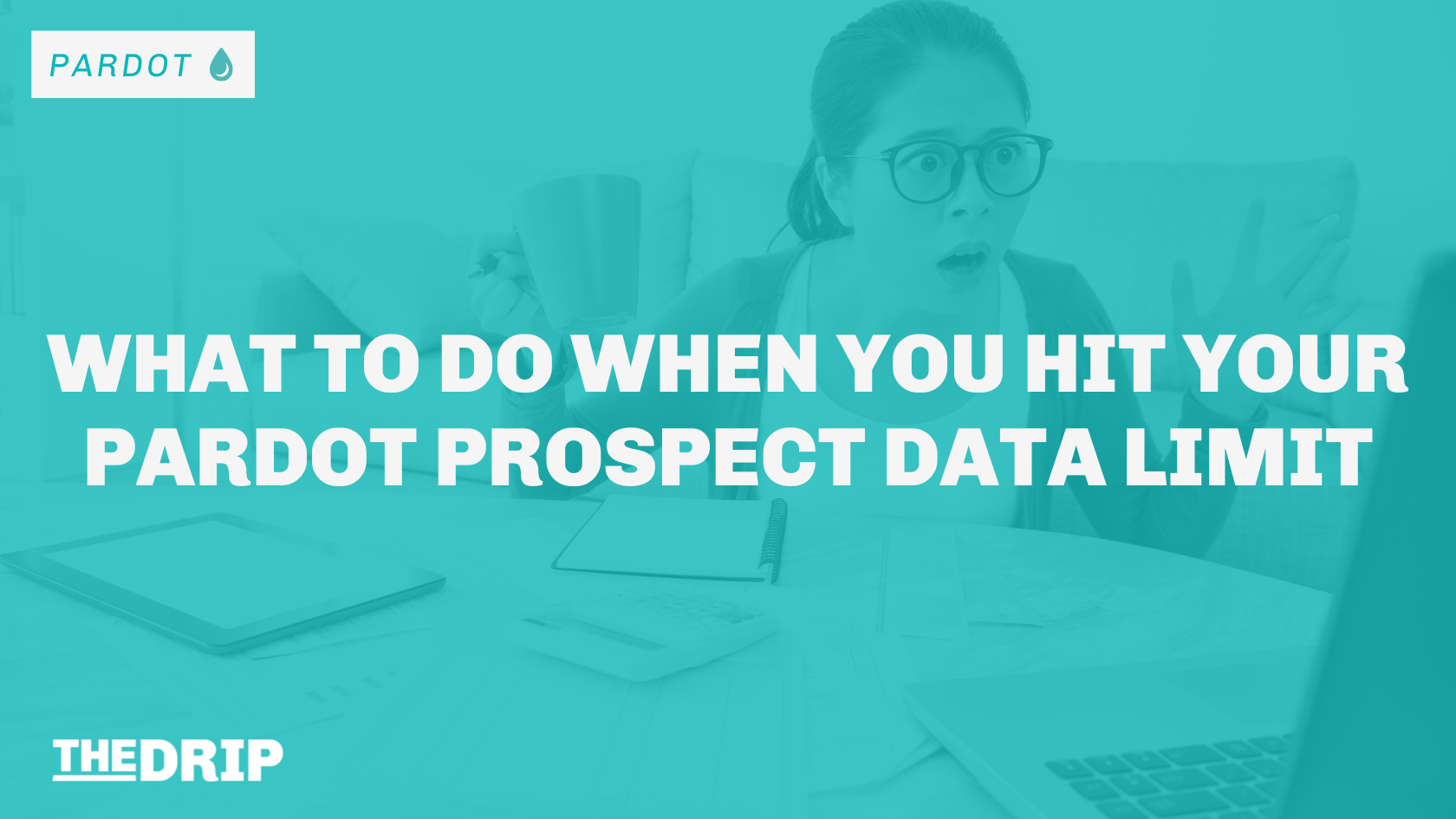 Will is a marketer with a real passion for automation. He works in the marketing team at Pracedo, a Platinum Consulting Partner, where he graduated through the apprenticeship programme.

Your Pardot database has limits, which I hope isn’t a surprise to you. You may be reading this because you’ve hit your mailable prospect limit in Pardot, and you need to do something about it soon.

Every Pardot edition allows up to 10,000 mailable prospects; while this sounds like a large number, it’s easier to hit than you may think. You’re then faced with a choice – increase your limit for a cost, or look to remove prospects that are no longer contributing to your marketing goals.

Luckily Pardot isn’t counting everybody in your database against your limit – yes, only mailable prospects count. Let’s start by outlining how Pardot defines ‘mailable’.

What Is a Mailable Prospect?

A mailable prospect is any prospect that’s able to receive emails from your Pardot account.

This means the following prospects don’t count against your mailable prospect limit:

READ MORE: What is a Mailable Prospect in Pardot?

Note: Prospects marked “Do not email” are not mailable, but still count towards your prospect database limit.

When you first hit your database limit you will get an email from Salesforce. But don’t panic, with these easy steps I’m about to share, you can resolve the issue quickly.

The first thing to ask yourself: do you want to increase your database limit, or reduce the number of mailable prospects?

Increase your database limit by purchasing additional prospects (in blocks of 10,000 prospects), however, this can be an expensive solution that may only work for you in the short term.

Think long and hard about how many prospects you actually need. If a higher limit is the right thing to do to ‘future-proof’ your Pardot account, then contact your Salesforce Account Executive to arrange that.

Most people, however, will need to cut down the number of mailable prospects, rather than increase their data limits. This is usually the case where organisations have historical data, and contacts they aren’t engaging through email.

How to Reduce Mailable Prospects in Pardot

If you think that it would be better to cut down your database instead of purchasing more, these are my recommendations for reducing mailable prospects. I’ve used all these methods and found them useful.

Removing prospects with ‘test’, ‘abcd’ or ‘1234’ included in their email address is usually a quick and easy fix to the problem. It’s highly unlikely they’ll be involved in the buying decision, therefore, it’s low risk.

You can find these email addresses by heading to the prospects tab and just searching for them. then use table actions to delete them (send them to the Recycle Bin).

There are more examples of spam email addresses you could identify, and delete:

2. Use an email verification service

Email verification identifies prospects that are likely to bounce when an email is sent to them. This is especially useful if you haven’t emailed individuals in a long time and want to avoid ruining your sending reputation. Pardot doesn’t come with this capability, so you will need to find a third-party provider.

One provider I recommend is NeverBounce, an inexpensive tool that can highlight prospects with invalid or questionable email addresses.

Just download a CSV of your full prospect list and upload it to NeverBounce, which then tests your emails, and sends a report of the records they would recommend you remove from your Pardot database. As you can see below, it only cleared 516 (Invalid and Disposable lists) prospects. While it isn’t a foolproof tool, it can certainly help if you’re struggling to get your database numbers down and have poor quality data.

3. Be brave and delete prospects that you haven’t communicated with in a long time.

If a prospect hasn’t communicated with you in over a year, it’s unlikely they will suddenly realise how important you are to them.

Sometimes you need to be brave and delete prospects that aren’t engaging with emails or other marketing assets to make room for new prospects that have actually shown interest. Less is more when it comes to getting quality leads.

Equally, it isn’t necessarily a bad thing if someone unsubscribes from your emails. It just means they aren’t interested in your product or service at this time. Consider this an opportunity to replace them with a potential customer who is more interested. There’s no point in having 10,000 prospects with zero interest in you as they simply won’t help you get the lead conversions that you’re after.

Mark Prospects as ‘Do Not Email’, or Add Prospects to the Recycling Bin?

The situation was simpler before the “Do not email” and “Opted out” fields were decoupled. Now, even if you mark a prospect as “Do not email”, that prospect will still count towards your mailable limit.

So, deciding if you should mark your prospects as “Do Not Email” or move them to the Recycling Bin is less straightforward than previously.

Ask yourself: what’s important? Tracking the prospect’s engagement with other Pardot assets, or giving the prospect a way to opt back into receiving emails?

Personally, I prefer the Recycling Bin method. It allows me to get my mailable prospect limit down, while allowing prospects who decide they are interested again at a later date, to fill in a form and start receiving my emails once again.

The best thing about this method is when the prospect comes back into your database after being in the Recycling Bin for X days/weeks/months, all the historical data on their prospect record is restored, meaning you haven’t lost anything in the long run.

If you’re confident you won’t want to email that customer again in the future (or you just can’t restrict visibility into their Engagement History), then use the Do Not Email field.

READ MORE: Getting to the Bottom of the ‘Do Not Email’ Field in Pardot [Infographic]
READ MORE: Salesforce Engagement History: The Complete Overview [Infographic]

How to Prevent Hitting Your Limit Again

Now that you have cleaned your data, you want to make sure you keep on top of it going forward. Preventative approaches will not only save you the hassle of cleaning data, but they will also help you reach your marketing goals sooner. Hope you find my two tips beneficial:

Consistent email marketing will clean your database for you. Every email will give the customer a chance to decide whether your product or service is right for them. If not they can opt out, making room for a customer that is more interested.

A consistent email marketing strategy is up to up to 40 times more effective than social media (according to a study done by McKinsey & Company) – so use it!

2. Use Dynamic Lists With Engagement Journeys

This is a great way to re-engage prospects that seem to have lost interest in you. Set up a Dynamic List with criteria like in my example below.

Then set up an Engagement Studio program to encourage prospects to interact with your content. The outcome will be either they become engaged prospects again, are processed by automation to be marked as ‘Do Not Email’, or added to the Recycling Bin.

We all know that Pardot is a great tool for nurturing your leads, delivering personalisation at scale, and implementing complex engagement journeys to maximise your marketing impact.

If you are regularly running events and have gated content on your website, you will find 10,000 is easily achievable in a few years, depending on the size of your customer base. But remember, Pardot only counts mailable prospects against your limit, which opens up workarounds for reducing your database limit without losing any data in the long term.

Previous Post: Getting to the Bottom of the ‘Do Not Email’ Field in Pardot [Infographic]
Next Post: Announcing Salesforce+, New “Netflix-like” Streaming Service