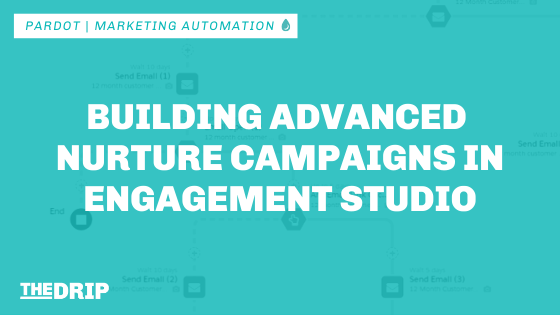 Pardot Engagement Studio is designed for running lead nurture programs. Many marketers wonder how they can maximise Pardot to build advanced engagement programs that segment prospects by their level of engagement for future use.

What I am going to show you is an example Engagement Studio program that supports the sales team working long sales cycles, to keep your brand front of mind with prospects who say ‘call me in 6 months’. Within the industry of this particular client, it’s just how prospect availability seems to play out – perhaps prospect behavior in your industry is the same?

It’s an interesting use case to share because it covers many elements of a successful Engagement Studio program: lists according to engagement, ways for sales people to stop prospects in the program, leveraging custom campaign member statuses, dynamic content, and more!

This talk was originally broadcast at the London Marketers (Pardot) Group. You will find the recording below, with time stamps included in the post so that you can follow along.

We have a prospect that meets the threshold we have set for them to become an MQL. They are assigned, sent through to Salesforce, to a sales person. The sales team follows up on that lead.

As most of you reading are in B2B marketing, we know that the sales cycle can actually be long. In this case, they’re trying to book a meeting for another member of the sales team to have a meeting with this prospect. But sometimes that meetings won’t happen straight away.

Again, because the sales cycle is a bit longer, the lead might ask for a call back months later, as in not: “call me in a few weeks”, but more like: “call me in 6 months”. So, the sales team will make a task to call this lead back.
What can you imagine happens to that lead during that 6 month period? They fall into the pit of despair: 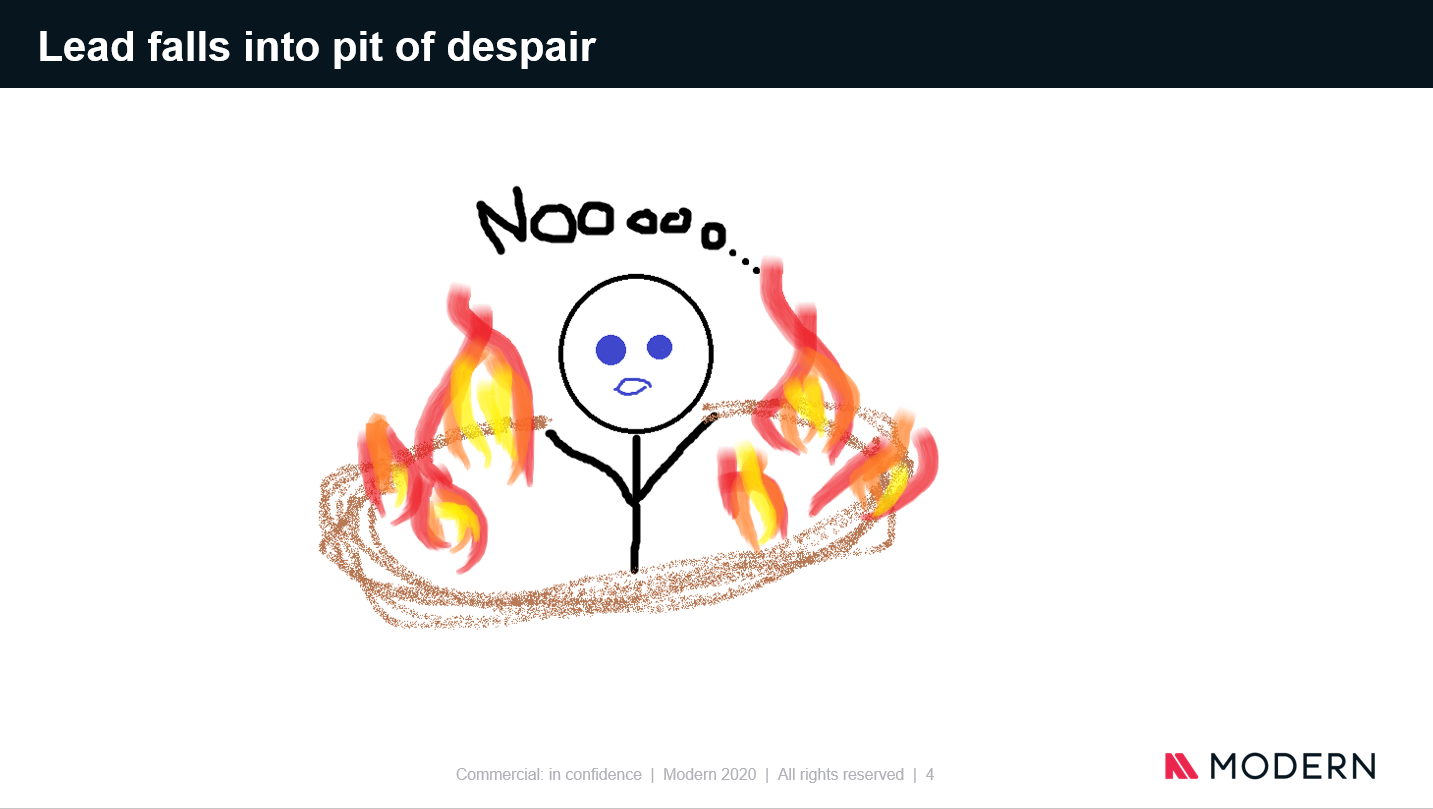 They’re getting no communication from marketing or from sales, which is pretty sad.

If the goal is to get them into a meeting, you want to keep your brand front of mind, so that way, they don’t wonder who you are when someone does call them six months down the line.

We saw an opportunity when working with one of our clients. We can use Pardot Engagement Studio with other Pardot features to nurture prospects by giving them relevant communications during this timeframe. If they engage sooner than you expect, you can jump on that immediately.

Let’s recap the use case just so it’s crystal clear before we start talking about the build itself:

There are two nurture programs:

Let’s look at the second, the ‘hot leads’ nurture program, which has more components involved. You will feel like a true Pardot pro after setting this up!

While we were in the planning phases, we discussed how we could get people into the list (and therefore, the Engagement Studio program) because there are several options, for example, a custom field value that indicates the person should be added, or based on whether or not they are in a Salesforce campaign. 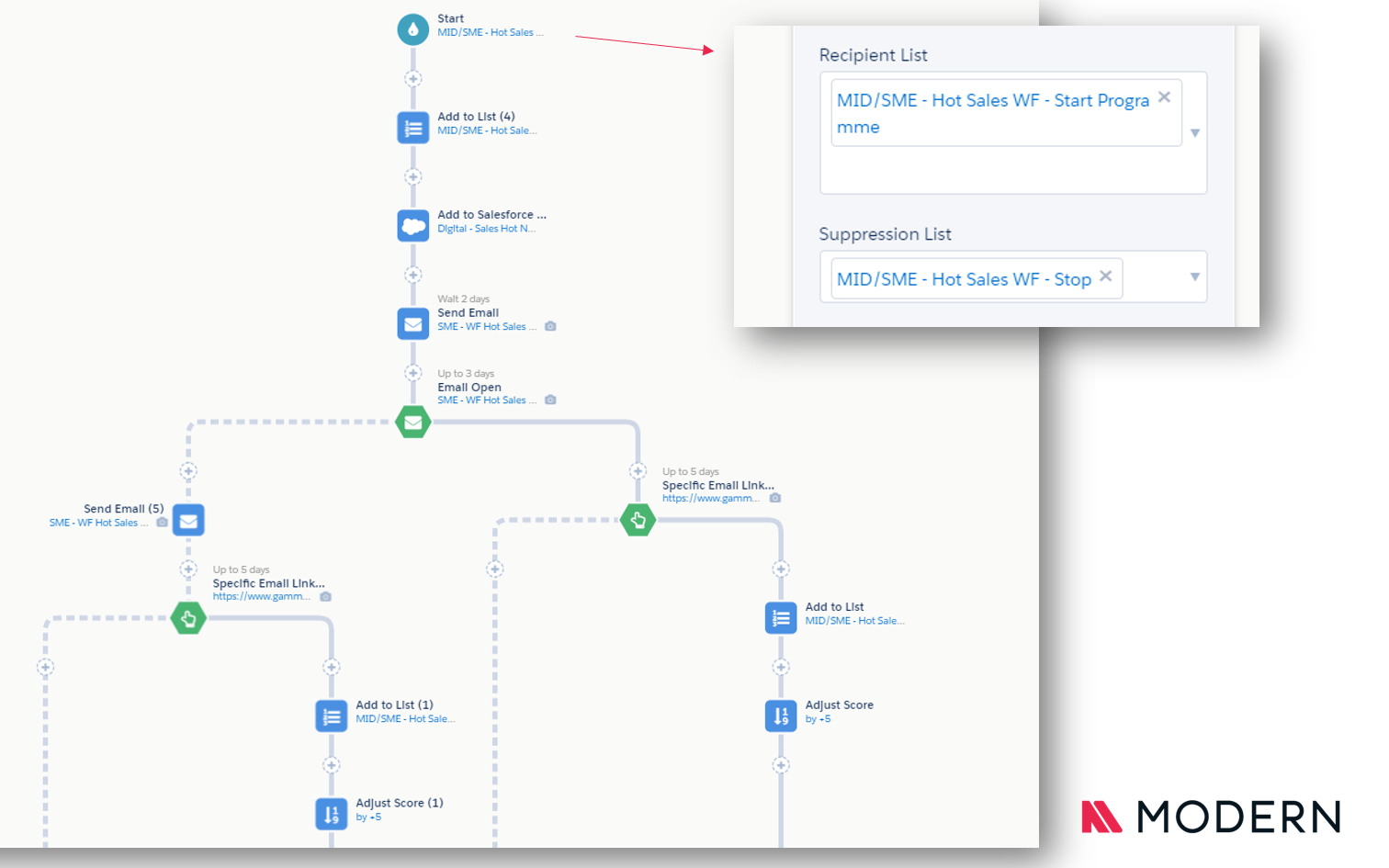 In the end, we agreed that the sales team should have control over who should be part of these programs; at the end of the day, this is for them to help nurture their leads.

There are new buttons to add a lead or contact to a Pardot list. All we had to do was create a Pardot list which became the recipient list; clear for sales to understand.

If the sales team starts having conversations earlier, the meeting is rebooked, or something else happens, this is how they will stop this prospect from receiving these emails. They have the control of adding them to that suppression list, knowing that it will stop them in their journey.

We were using lists a lot in this program to segment and group prospects.

One example is straightaway after a person starts the program, they’re added to a ‘program entrance’ list as a way to record who was part of the program in case they don’t make it all the way to the end, for example, if sales suppresses (removes) them. 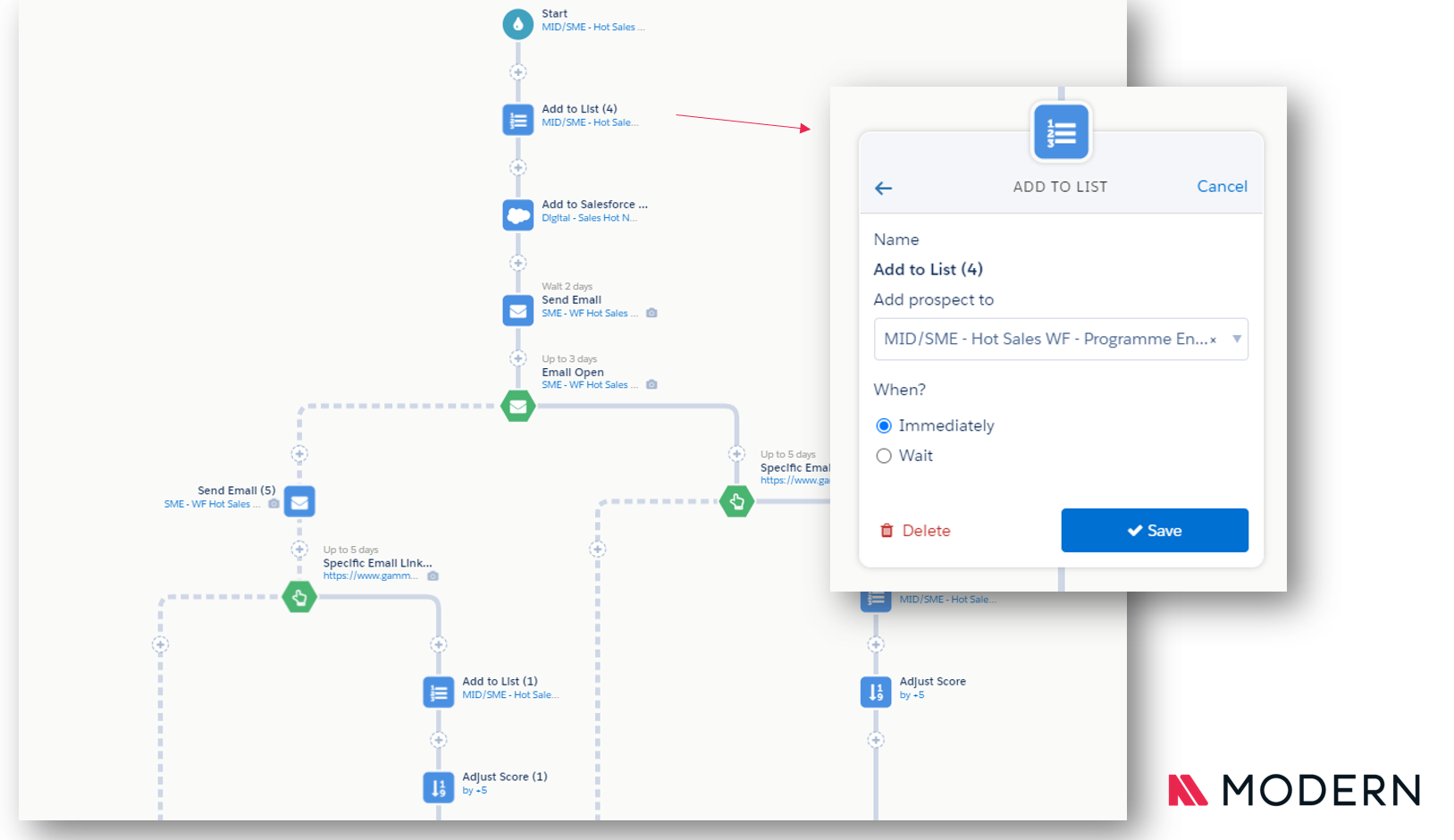 When adding prospects to Salesforce campaigns, we used custom campaign member statuses to indicate where in the journey each prospect is. 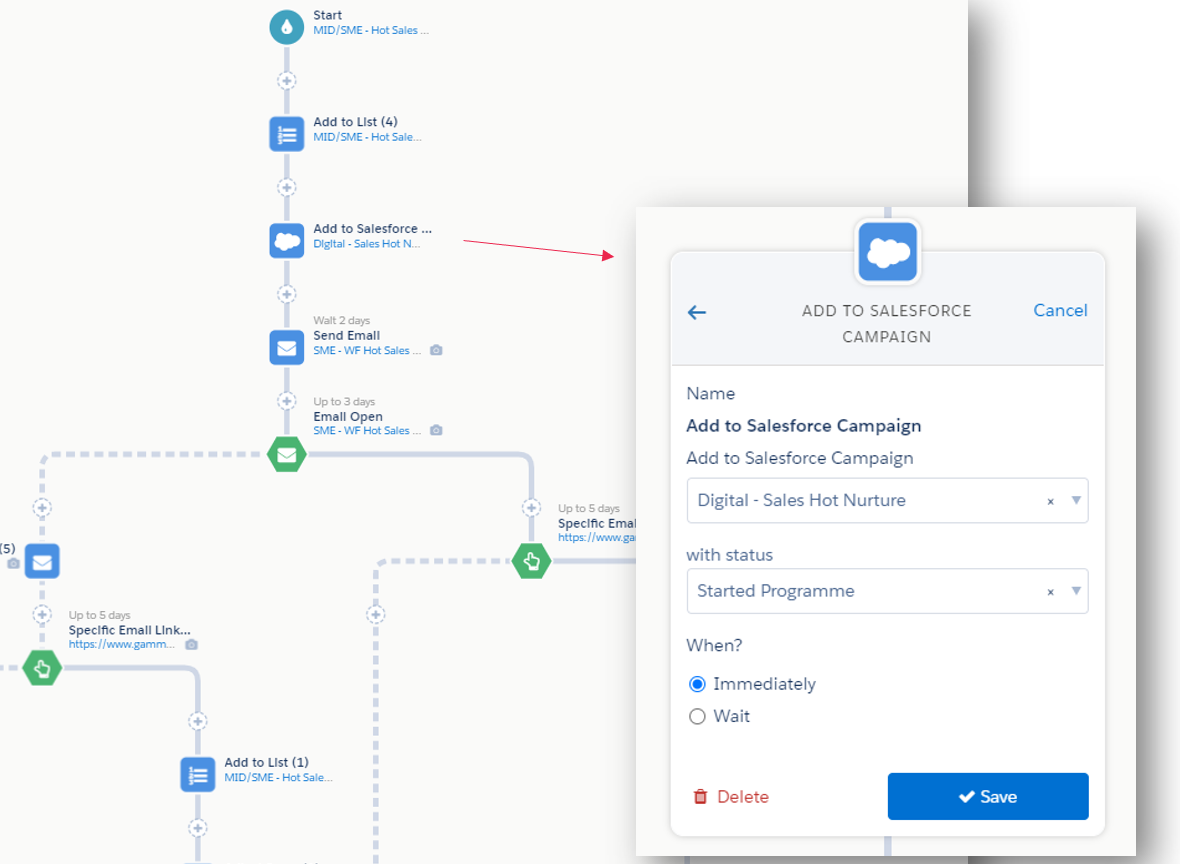 At the beginning, we used ‘started program’ and you’ll see, as we go through, there are different types of actions that the prospect could take, which will change that campaign member status accordingly.

Again, this provides a really clear view in Salesforce for the sales team on where in the journey that lead or contact is.

Sending emails in this particular program was all about sharing relevant content, keeping the brand front of mind for prospects.

We’re using Engagement Studio to see whether the email was opened.  If it was, the program checks to see if a specific link was clicked (which is the link to the content hosted on their website). 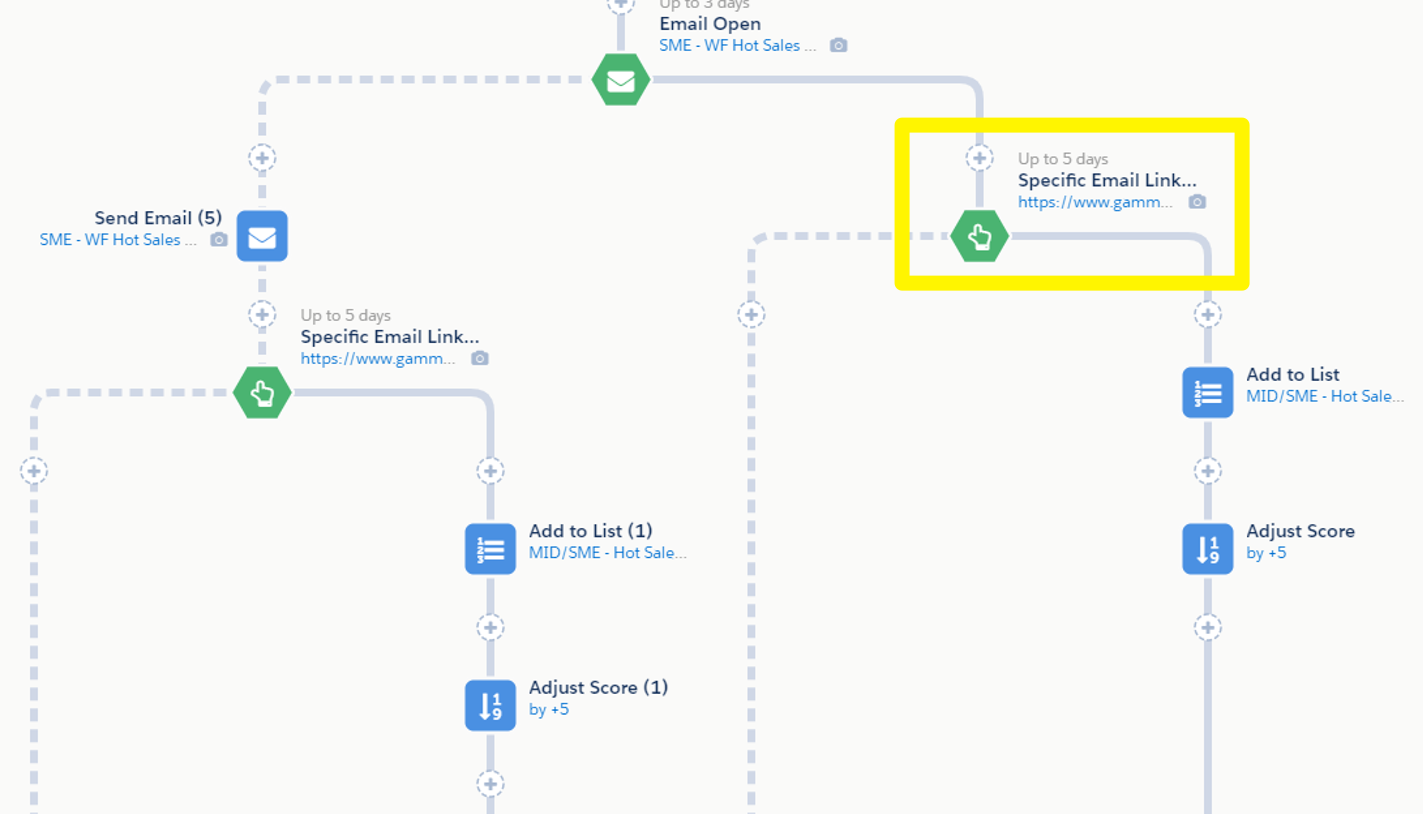 If the link wasn’t clicked, do an email resend, and then listen out for the link click again. 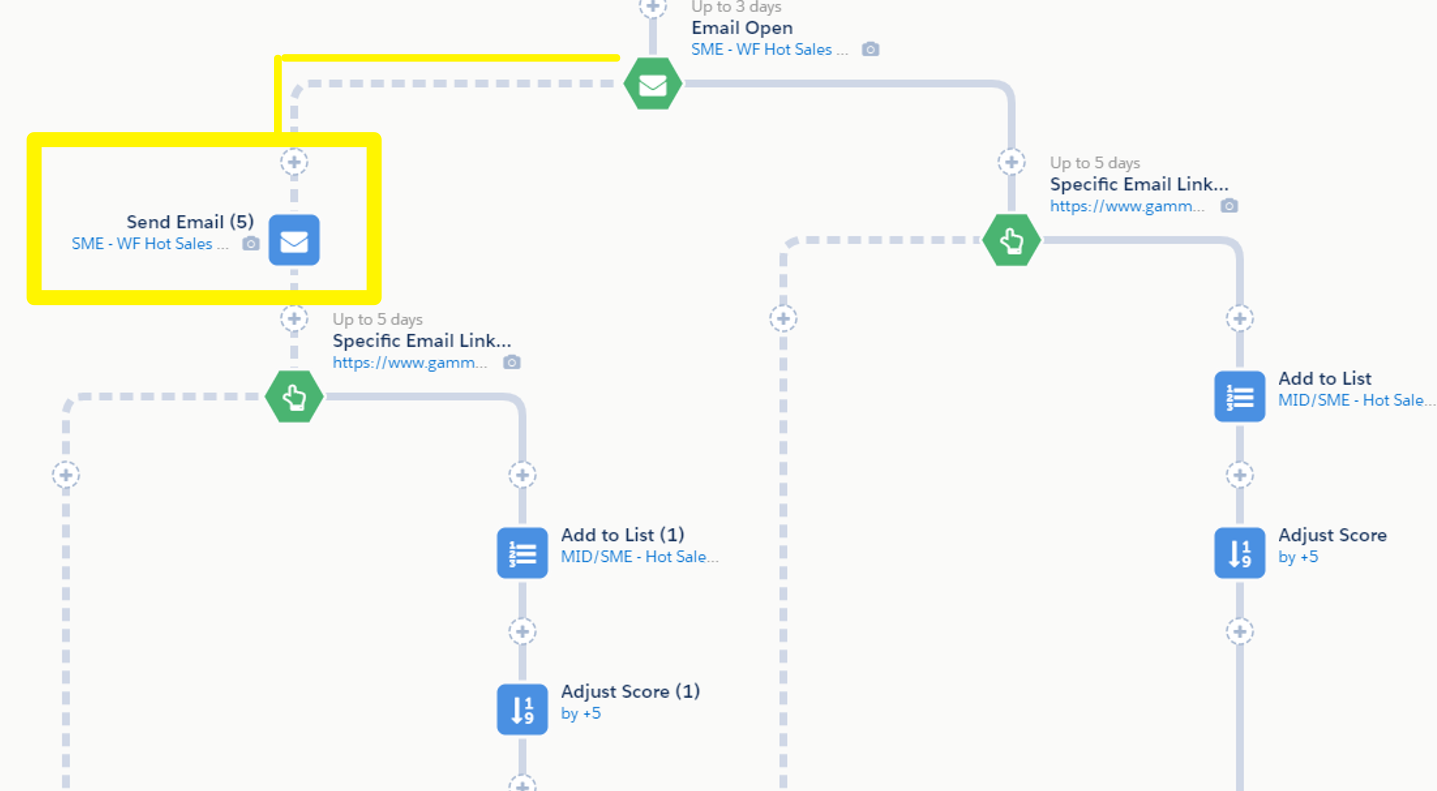 If you’re following along, we’ve now headed over on to the left side. This repeats throughout the entire program. 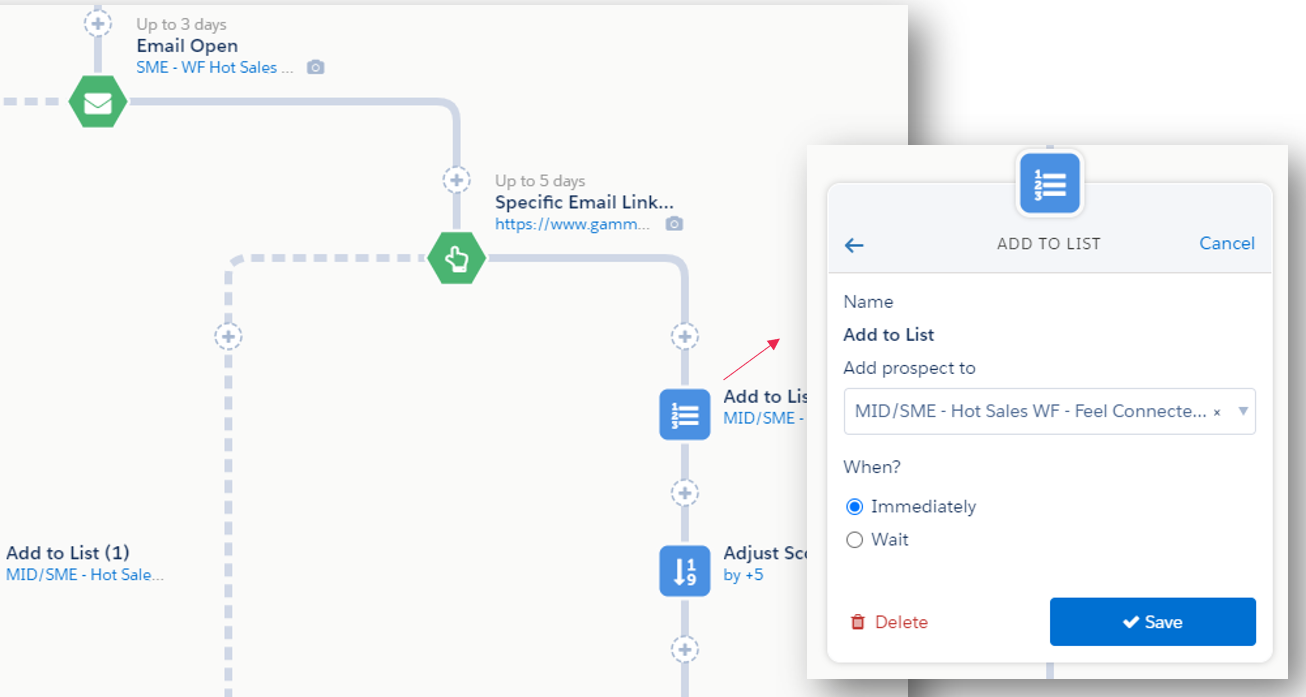 As I said, we’re looking if people clicking on the email links to content. If they do, we’re adding them to a list that is specific to that content, as a way of grouping those engaged people.  You could use tags as well for this – we just decided to use lists…which sparked a conversation on lists vs. Pardot tags! 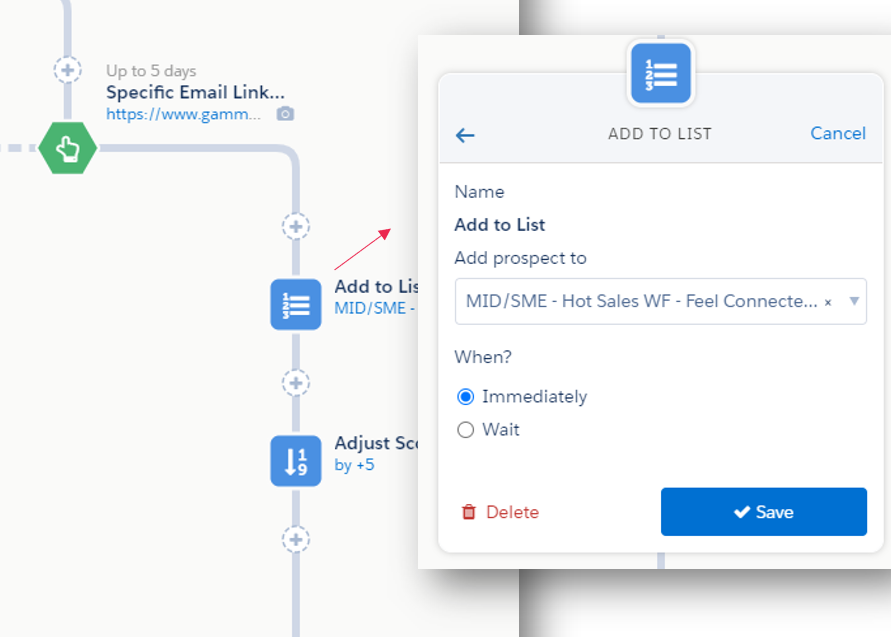 Then we get to this point, where there’s not a whole lot going on! We are literally just checking if the email was opened and if it wasn’t, we do the resend. Why are we not checking for any clicks?

This email is exceptional to the rest. It uses dynamic content, which sets limitations because Engagement Studio cannot monitor what people are clicking on when it’s part of dynamic content.

When you look at the image below, obviously it looks really basic:

However, when we go through and look at the dynamic content itself, you can see there’s more content going on. This company wanted to share different material based on the company size, where variation A and B will be displayed for SME businesses (< 100 employees), variation C and D are mid-market (100-500 employees), etc. 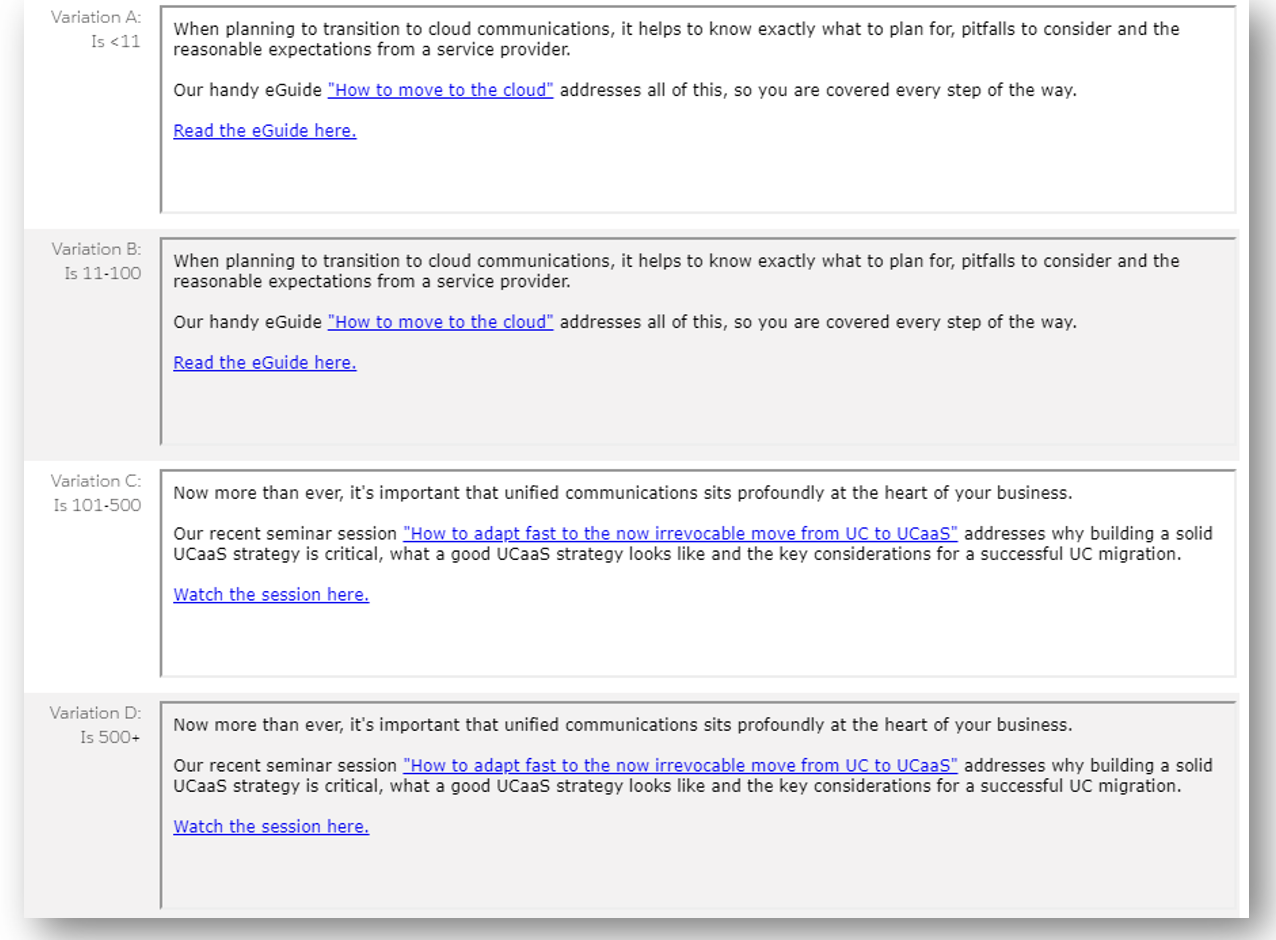 In each of these bits of dynamic content, we’re using a custom redirect. What we can do with custom redirects, is to do the things we would have done in Engagement Studio for example listening for a link click, then add people to a list or adjusting the score, etc. 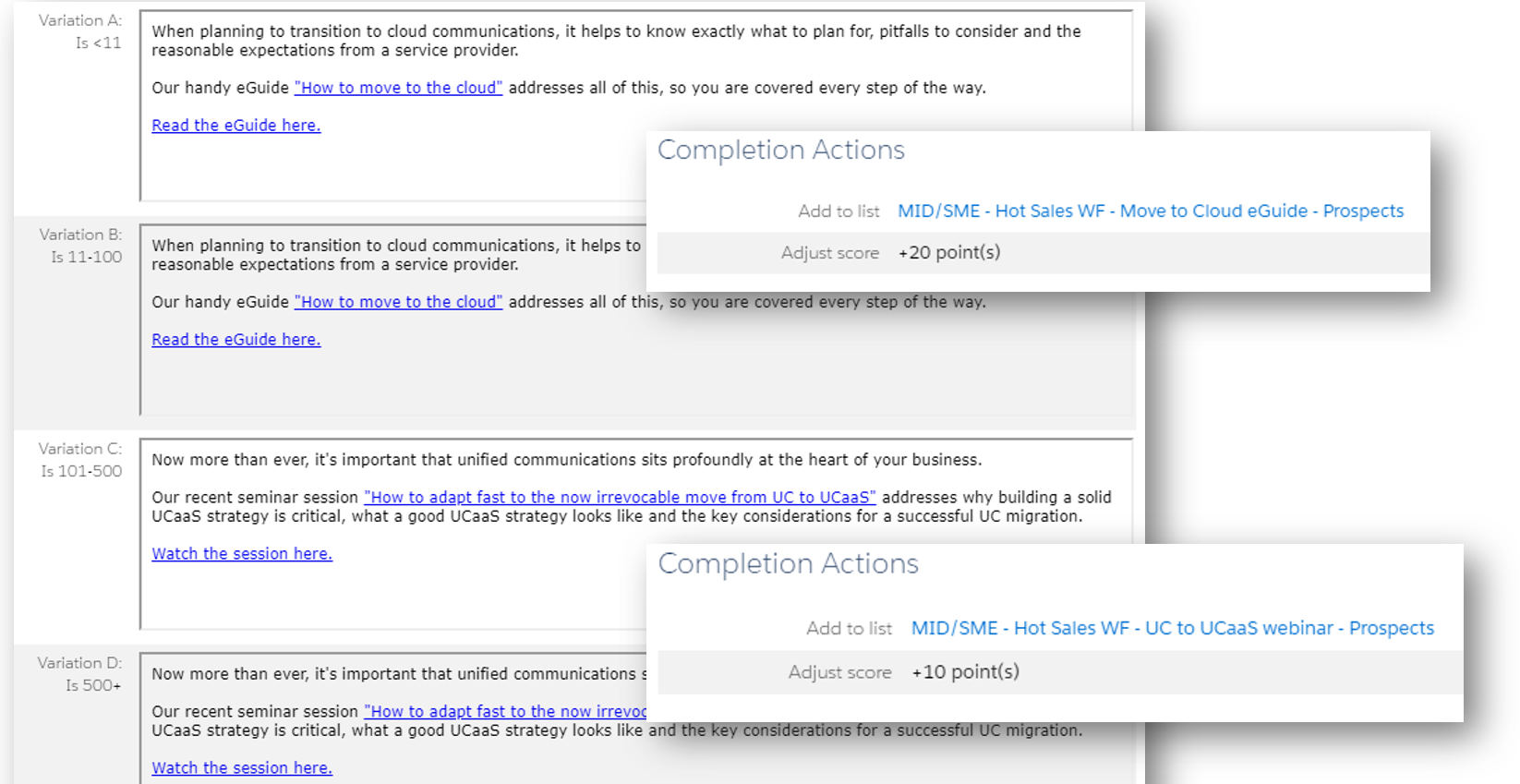 Rule steps in this Engagement Studio evaluate whether prospects are on the stop list (that sales would have added a prospect to). We use this rule step to send prospects on that list down one path, where an action changes their Salesforce campaign member status to ‘sales removed’. 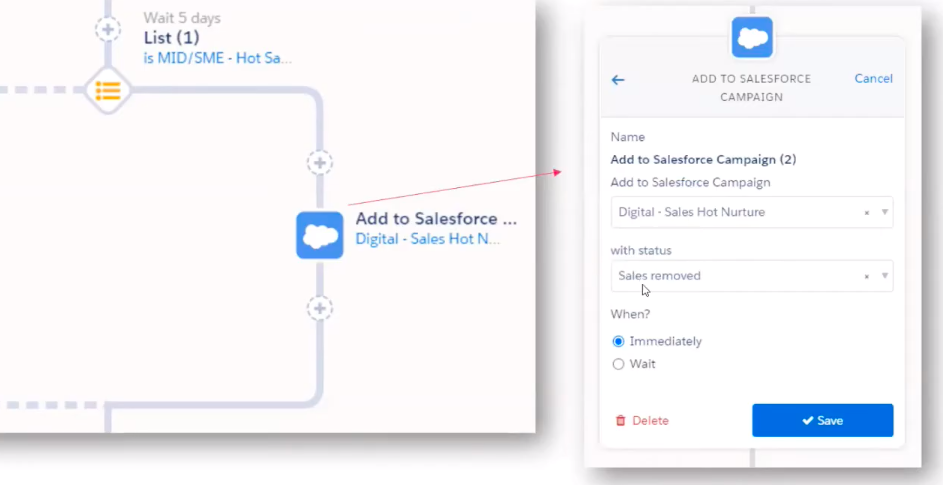 Again, this paints a clear picture in Salesforce if they’ve been removed from the nurture program because of the stop list.

Aside from a rule step, you could also set up segmentation that can run for multiple email sends, or even across multiple programs. Two ways you can extend your segmentation are: 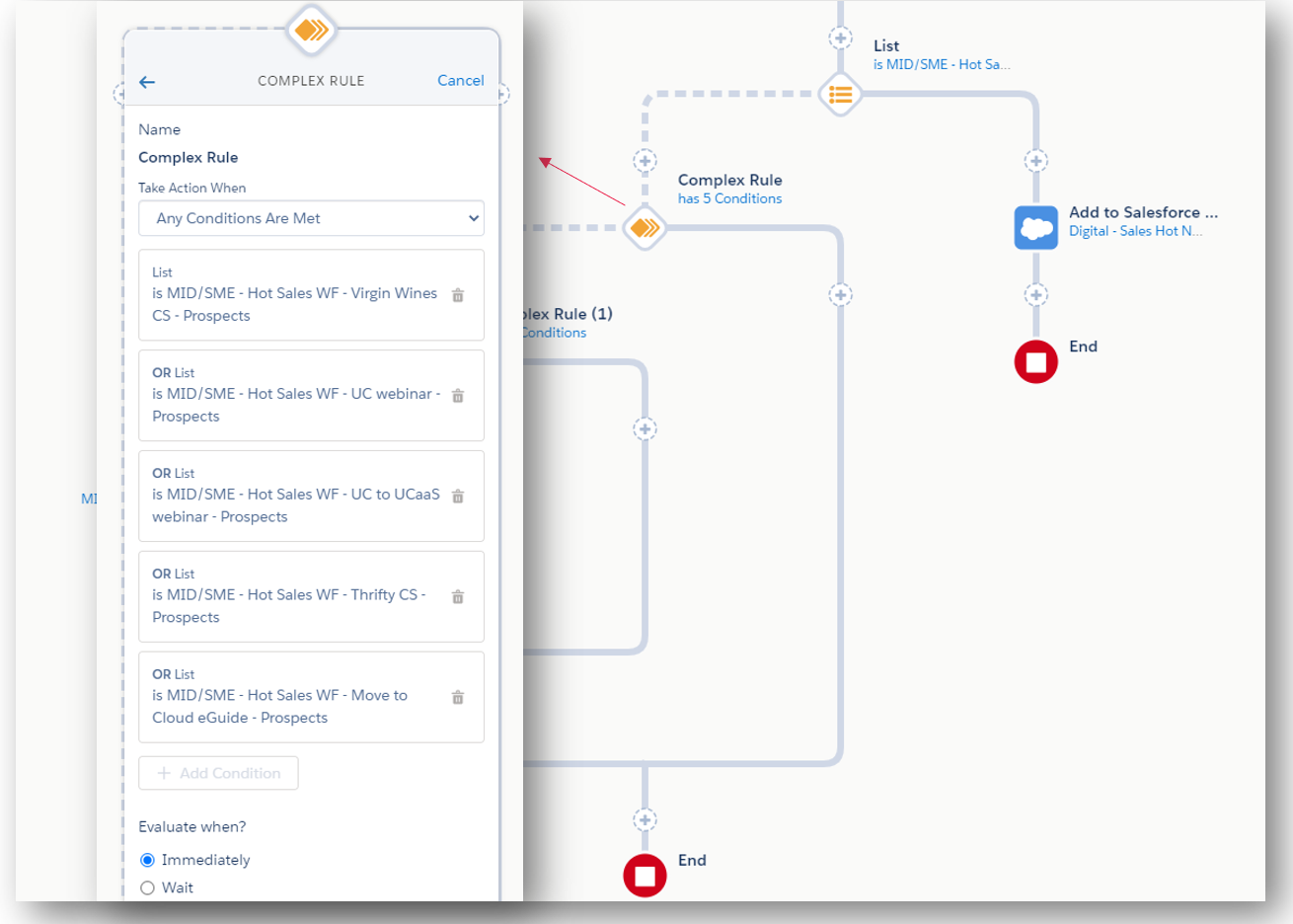 What we’re looking at here is whether people are on the content lists to determine if they were engaged or weren’t engaged. Remember, we’ve been adding prospects to these lists throughout the program.

Engaged prospects on any of the content lists go along the ‘yes’ path here: 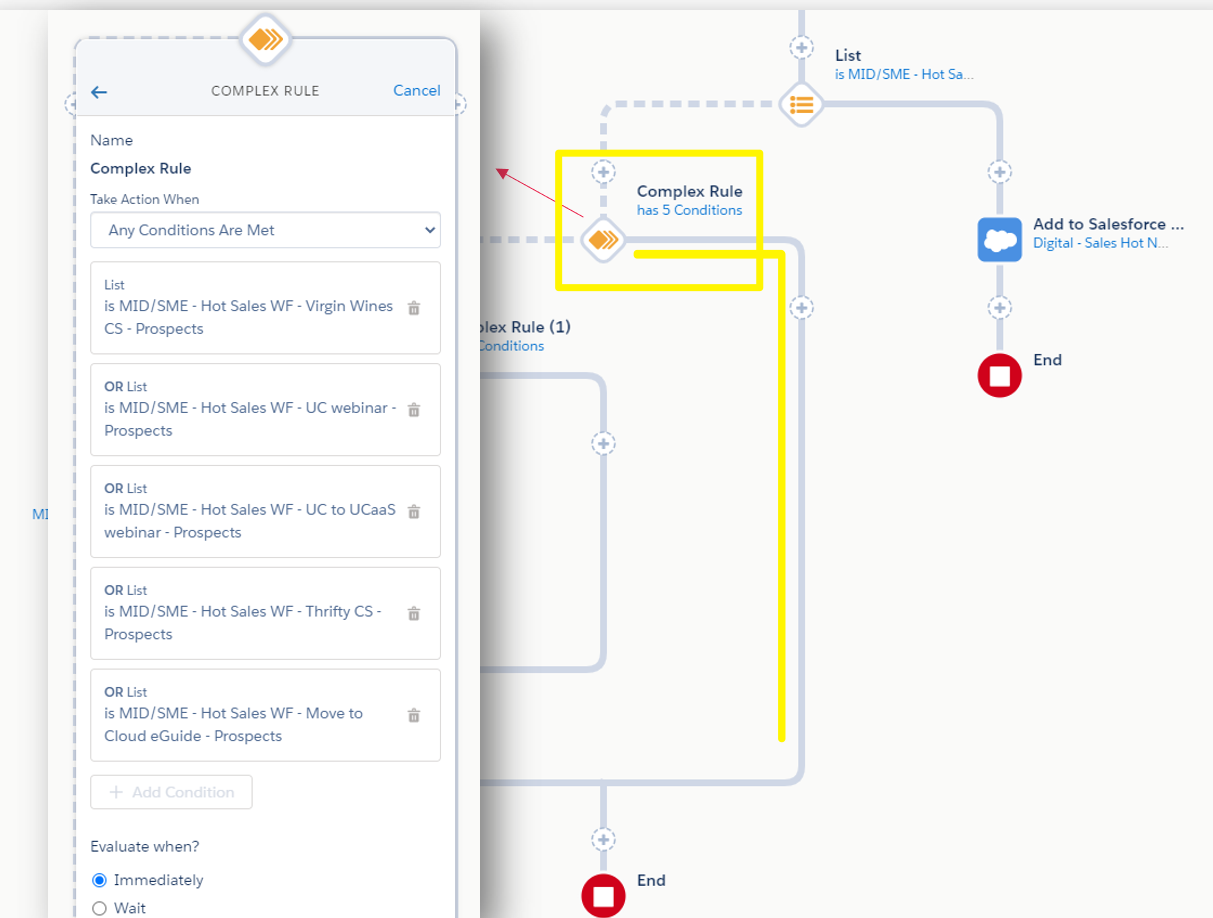 Otherwise, they go down the ‘no’ path. We added an ‘Add to list’ action here to add these prospects to an ‘unengaged prospects’ list as another way to group prospects easily; you could choose to do nothing with it, or you could pass that list back to sales for them to do some direct follow-up. 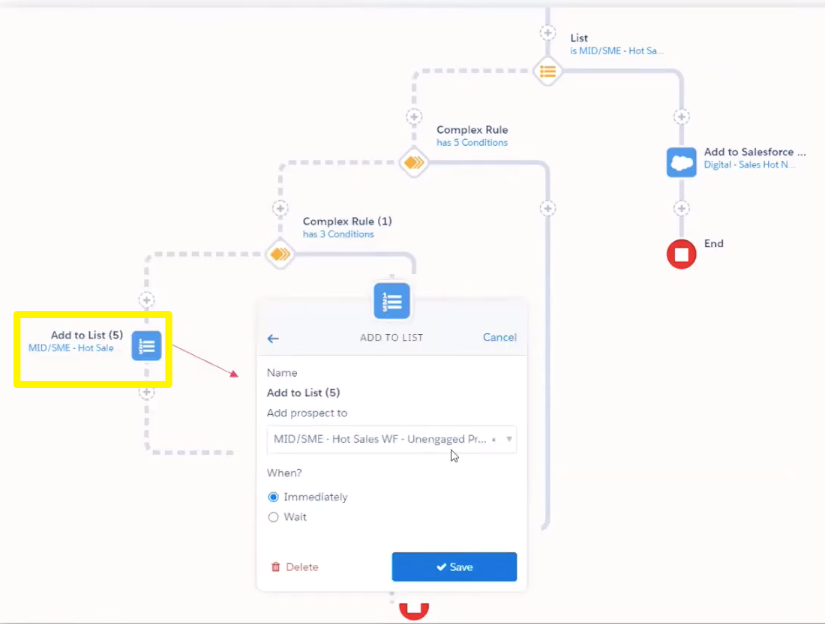 When Prospects Engage Before They Said They Would

We want to keep offering prospects the chance to ‘raise their hand’ if they want to talk to the sales team before they said they would be ready to, originally.

Each of the emails, along with sharing content, had a call to action to request a callback from sales. Whenever a prospect clicks on that link, we have actions in the Engagement Studio program to assign a task to sales and change their campaign status to ‘requested callback’.

These are just a couple of ways to make sure we’re not missing out on people who are proactively showing interest!

Pardot Engagement Studio is designed for running lead nurture programs. Many marketers wonder how they can maximise Pardot to build advanced engagement programs that segment prospects by their level of engagement for future use.

In this post, I showed you an example Engagement Studio program that supports the sales team working long sales cycles, to keep your brand front of mind with prospects who say ‘call me in 6 months’. It covers many elements of a successful Engagement Studio program, such as lists according to engagement, ways for sales people to stop prospects in the program, leveraging custom campaign member statuses, dynamic content, and more!

If you want to hear how you can continue advancing your Engagement Studio skills, check out my tips I have picked up on working with multiple clients and their Pardot orgs.