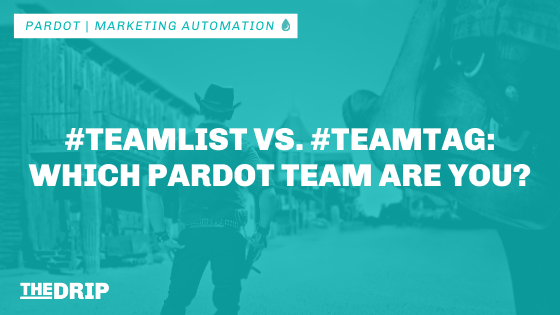 ‘Should you use Pardot lists or Pardot tags?’ is the real question being asked here. When creating Engagement Studio rule steps, or segmenting prospects in Pardot generally, you have more than one option.

This often sparks the lists vs. tags question, just like what happened at the most recent London Marketers Group (Pardot). It turned into a little fun as we discussed the differences. Which team do you choose? Are you #teamlist, or #teamtag?

Pardot lists group prospects together. Lists can be used when sending an email, running automation, and more. Lists can be static or dynamic. Static lists are those lists you add or remove prospects manually, or by using an automation rule – but they require some input from a user. Dynamic lists, on the other hand, update automatically based on prospect criteria.

Pardot Tags are an underrated feature. Using Tags properly presents a nifty way to stick a label on to any record or asset in Pardot, for quick segmentation, organisation and identification.

The reality is that Tags are often created in a ‘Quick & Dirty’ way to serve a one time purpose – a use, abuse and abandon way with little strategy.

What if you decided that you and your team could commit to a tagging strategy? Could you use tags to segment prospects down yes and no paths as they progressed through an engagement program?

Or could using lists be a better option?

Using Lists Over Tags – Why #teamlist is the Winner

Lists are generally more friendly to work with. Not only can the list name be more descriptive than that of a tag, but the list interface tells you more information like % mailable.

“I like to be utilitarian”, said Safiyyah, Pardot Consultant and PUG co-leader, “you will often need to make a list to send an email, so then you’re adding an unnecessary step to create a list from a tag using an automation rule” – which, as you may know, have a limited number per Pardot account (Growth edition: 50, Plus edition: 100, Advanced: 150, Premium, 150).

There are also reasons why #teamtag lost due to the downsides of using tags:

After such an interesting conversation at the London Marketers Group (Pardot) meetup, I wanted to share this insight with everyone. Of course, there are benefits to using tags and ways you should look to get more out of them, but for important segmentation use cases (eg. Rule steps in Engagement Studio), the verdict is out – #teamlist won.

Which team do you choose? Are you #teamlist, or #teamtag? Are there any points that we forgot about?

2 thoughts on “#Teamlist vs. #Teamtag: Which Pardot Team Are You On?”