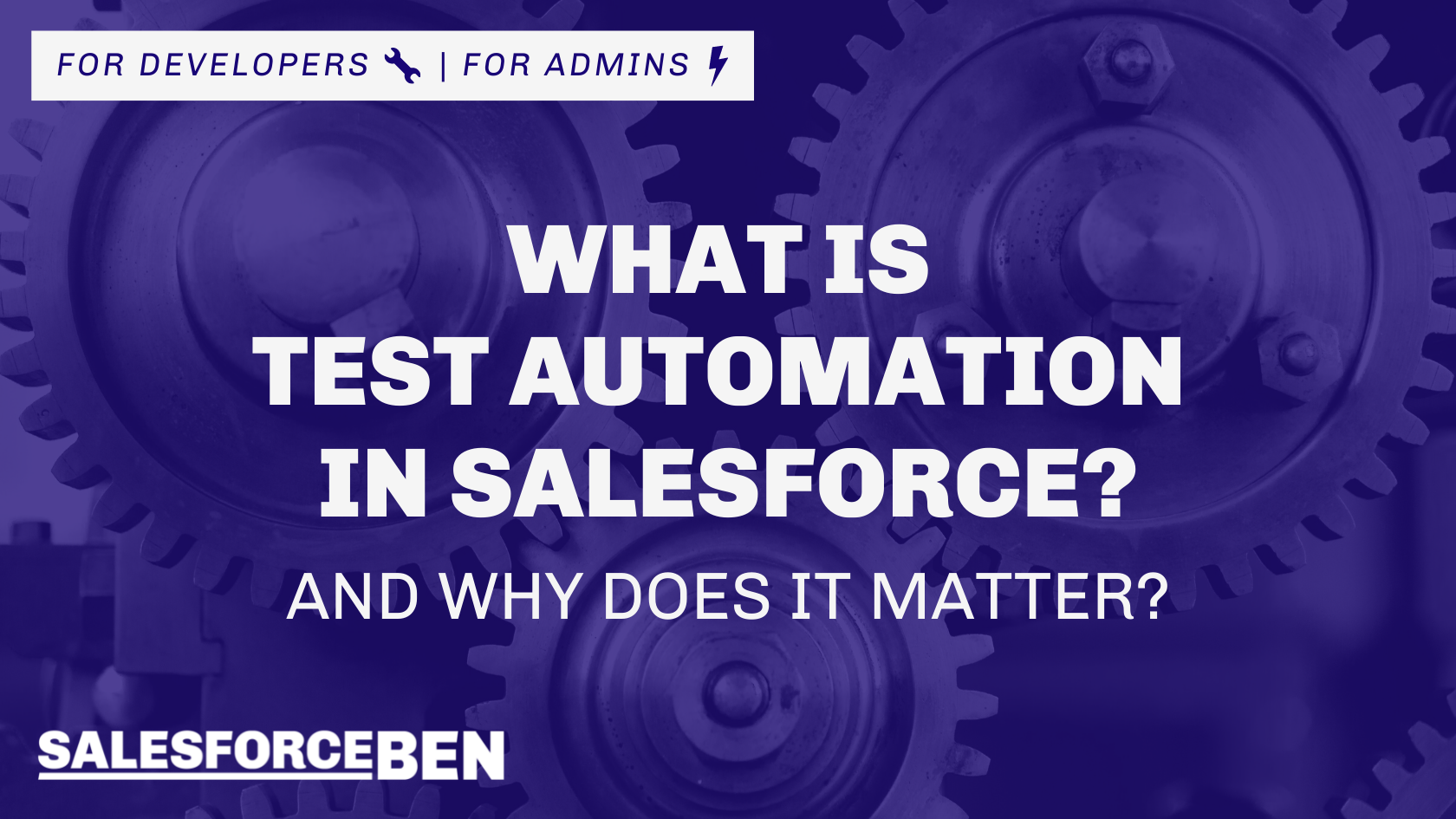 Mike Wager is a Product Marketing Manager at Eggplant, a Keysight Technologies company.

When Salesforce first launched in 2000, it was little more than a contact database where customer details were stored and sales opportunities were tracked. Today it is barely recognizable as all kinds of departments, from sales and marketing to operations and finance, depend on it to drive their business forward.

Organizations now implement unique workflows, custom input fields, and numerous third-party integrations specific to their business needs. These customizations improve processes and functionality, but deploying them without test automation slows delivery cycles and often leads to errors in the user interface (UI). As a result, your Salesforce instance isn’t fit for purpose, and you can expect angry phone calls and emails from your end-users.

What is Salesforce Test Automation?

Traditionally, manual testing was used for exploratory (searching and identifying potential bugs) and black box (validating functionality at the UI layer instead of interrogating the code) testing, whereas test automation was used for unit and integration tests.

The Problems with Manual Testing

How many business logic customizations does your Salesforce platform have? What about the various browsers, devices, and operating systems that can be used? And different system and application integrations? How about every user journey and action that could be taken across the whole ecosystem?

Now think about manually testing every permutation that the above will create. I don’t know about you, but I wouldn’t want to undertake such a mammoth task.

If trying to visualize the complexities of manually testing is hurting your brain – and I don’t blame you – let’s break it down.

Do you have hours to waste and money to burn?

As you might have guessed, building, executing, and maintaining manual tests take a long time. Identifying each user journey is impossible with so many moving parts. Even if you could create a precise list, the time needed to build every test case would grind your entire software development life cycle to a halt. Trying to do this is not only a waste of time; it is a monumental waste of money. Furthermore, manual tests are fragile and often break, which eats up yet more time and money.

Manual tests are not reliable

Salesforce is a dynamic application with hundreds of new features delivered by three major automatic upgrades every year. Great for improving UI functionality, but these regular upgrades break manual scripts, which require many hours to fix.

The problem here is that these upgrades alter some web elements, such as iFrames, dropdowns, and pop-up windows within the source code. Web elements are important because they represent a particular function or action a user can take and are used to build test scripts. After the update, pre-existing test scripts break as they search for web elements that have been altered or no longer exist. As you can imagine, manually searching through thousands of lines of code to find which web element has changed is a pain-staking process.

And there is more bad news. Web elements can change during any update. Or when a third-party application is integrated. Or when new business logic is introduced. New web elements are created or referenced differently when these events happen, so you spend most of your time maintaining scripts instead of building new ones.

The devil is in the detail

Due to the numerous updates that improve Salesforce’s functionality, the underlying code constantly changes, so you need to execute many regression tests. It’s neither fun nor a worthwhile exercise for skilled (and expensive) testers. Performing hundreds of repetitive tests is also incredibly mundane, increasing the chance of errors creeping in. At its basic core, test automation is excellent for repetitive regression testing because it is fast and accurate. Let automation do the grunt work so that you can get on with more valuable jobs.

With so many customizations and integrations, not to mention numerous user journeys and individual actions, manually testing your Salesforce platform is hugely challenging and time-consuming. As a result, testing is rushed, causing buggy versions to be released, preventing users and the business from functioning as expected.

Test automation is quick, accurate, and maintains Salesforce’s core functionality to deliver a quality user experience. However, not all test automation tools are equal. Some can only test web applications, so you will need another tool to test mobile apps. Test scripts built by automation tools that only verify web elements suffer the same problem as manual tests – they break when looking for web elements that no longer exist or have changed.

So how do you know which test automation solution to use? Lucky for you, there is a handy checklist below.

Before you waste time and money implementing the wrong tool, follow this list to find the best test automation solution:

1. Anyone can use it

Salesforce is the heartbeat for many organizations. As such, people with an understanding of business logic rather than testing are involved when creating new custom workflows. A test automation solution using a low-code/no-code approach allows anyone to create test models and scripts regardless of technical ability.

Salesforce rarely works in isolation. Numerous third-party applications, business-critical workflows, and back-end systems linked by application programming interfaces (APIs) introduce multiple layers of technology. Normally, multiple tools are needed to test all these different layers of technology which is extremely costly. Use a test automation solution that can integrate with anything to deliver true end-to-end testing.

3. No need for major framework changes

Test automation solutions that use a model-based approach give you flexibility. All you need to do is create one model, and you can test both Classic and Lightning versions of Salesforce. From our experience, there are still organizations out there using Salesforce Classic, and situations when users toggle between the two UIs.

You can also test any user journey across different UIs, devices, and browsers. So, no matter how much your test scenarios change, your framework doesn’t.

With such unique actions across multiple user journeys, use artificial intelligence and machine learning algorithms to test more than predictable happy paths. Combine directed tests with AI-driven exploratory testing to uncover every possible user journey and expand your test coverage to areas you never considered.

MManual testing and tools that rely on identifying web elements to verify UI functionality break when testing Salesforce. Find a test automation solution that creates robust test assets that do not break after every new release, update, or upgrade by verifying web elements and validating the UI.

An automation solution can’t make every decision for you, but it can help. Using detailed test analysis such as test coverage, pass/fail rate, and numbers of bugs found, you can focus testing effort on areas of your Salesforce that need it the most.

7. Increase the velocity of every release cycle

No two Salesforce instances are the same, so building and deploying various tests that constantly need maintaining is slow and, quite frankly, a pain. So, what if you could accelerate every deployment with a solution that auto-generates test cases that are specific to your Salesforce platform? Sounds too good to be true.

Keysight’s Eggplant Salesforce Solution dramatically speeds up testing from months to just minutes. By integrating with the Salesforce API, it collects metadata specific to your Salesforce instance, analyzes every data flow, business logic, and customization to auto-generate test cases at the click of a button.

Users have a testing framework that doesn’t break after every Salesforce update, can test both Classic and Lightning versions across any browser, device, and operating system, and combines testing technologies to verify the code as well as validate the UI.

AI drives Eggplant’s automated exploratory testing to expand test coverage incrementally by proactively exploring areas of Salesforce where defects have already been identified, so the probability of other bugs is high. Testers can view a heatmap of test coverage percentages to quickly see which areas of Salesforce have been tested. A simple dashboard displays test data, so at a glance, anyone, regardless of technical knowledge, can see if tests have passed or failed.

To find out more, grab a copy of the Eggplant Salesforce Solution brief and discover how to reduce your testing effort to a matter of minutes.

2 thoughts on “What is Test Automation in Salesforce and Why Does it Matter?”