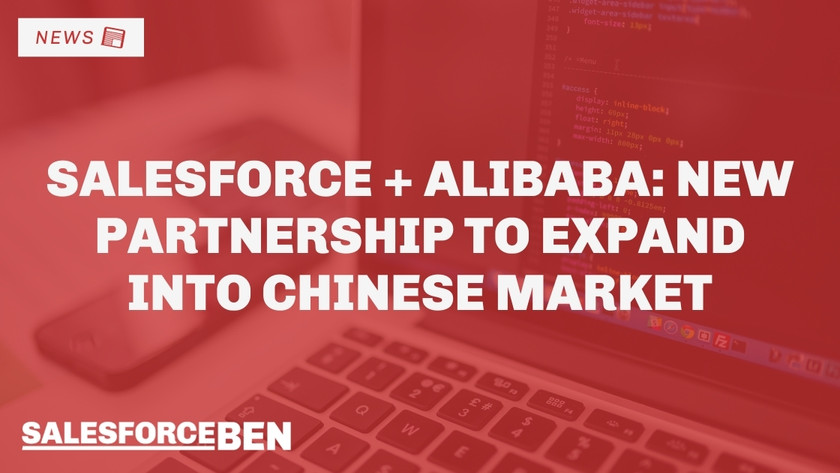 China is a unique market and a nut that Salesforce is hoping to crack by strengthening their partnership with eCommerce and technology giant, Alibaba. Since the first iteration of the partnership was announced in 2019, Salesforce and Alibaba have continued reiterating their combined offering.

Alibaba is well known for its online platform that allows businesses and consumers globally to buy a wide range of products, mainly in bulk, from China. Over the years, following the lead of Amazon, Alibaba has expanded into other revenue streams, including cloud computing (Alibaba Cloud), payments and entertainment.

Salesforce first announced its partnership with Alibaba Group back in 2019, with Alibaba securing sole distributor exclusivity of Salesforce products in China.

This wasn’t the first time Salesforce had tried to break into the Chinese market. In fact, as far back as 2007, they released Salesforce China Edition, aimed at small to medium-sized businesses. Despite their efforts, Salesforce’s Asia Pacific (APAC) revenues were a minority of its revenues across other regions, despite the huge untapped potential.

Knowing they needed to follow another route, Salesforce sparked a partnership with Alibaba, which made sense – strengthening Alibaba’s offering to the enterprise market as it doesn’t have an equivalent product.

Chinese enterprises do business in unique ways. For one, email is pretty much non-existent in favor of WeChat: a messaging and calling app somewhat similar to WhatsApp.

In 2021, Salesforce and Alibaba Cloud announced they were working toward an agreement to launch Salesforce Social Commerce (now available): a headless commerce product being designed and built in China to “unify data across local channels”.

Salesforce spotted a hot opportunity. The growth of social commerce in China marked a “global historic first” where e-commerce was projected to account for more than 50% of all retail sales. China’s B2C Ecommerce Gross Merchandise Value will reach $3,997.5B by 2026 (from $2,396.5B in 2021) – a year on year growth of 11.68%.

Interestingly, the share of independent websites (brand-own websites and e-commerce marketplaces) doubled in 2021 (source). Salesforce Social Commerce will be a huge support for these e-retailers.

Fast-forward to today, Alibaba Cloud is the digital technology and intelligence backbone of Alibaba Group,

While Dreamforce was in full swing, the Alibaba Cloud Summit was happening simultaneously; new products to support technology innovation and a $1B investment into their global partner ecosystem were announced. Alibaba Cloud currently works with about 11,000 partners worldwide, including Salesforce, VMware, Fortinet, IBM, and Neo4j.

There were clues in the Social Commerce product information, which leverages Alibaba Cloud, one of the world’s leading public clouds.

When you hear “public clouds” and “Salesforce”, it’s likely that you think “Hyperforce”.

Hyperforce received a second wind at Dreamforce ‘22, being the foundation for Salesforce Genie: an innovation that is being touted as the greatest Salesforce innovation in the company’s history.

Hyperforce is currently available in ten regions, reaching 17 countries by the end of 2023.

Two primary aspects of Hyperforce are security and data residency (i.e. your data is a “resident” in a specific country/region for compliance reasons). This is especially pertinent in China, where regional compliance and data residency requirements can hold back foreign enterprises from operating in China (including Salesforce). Alibaba Cloud is the route into the country that solves this.

Organizations have been faced with a hurdle – to integrate with a range of platforms unique to Chinese businesses and consumers. As aforementioned, Salesforce Social Commerce takes an API-first approach, which means key systems such as OMS, PIM, and more can be easily integrated. We could expect the number of integrations required and the number of partner offerings with pre-built integrations to grow in the future.

On a side note, restructuring further demonstrates that Salesforce is doubling down on their partnership with Alibaba; Salesforce are closing their office in Hong Kong in favor of presence in Mainland China, specifically Guangzhou.

The Salesforce and Alibaba partnership will open doors for people in the Chinese Salesforce ecosystem in a secure, integrated, and innovative way. Making Salesforce more accessible across the world will also play a big part in unifying users, companies, employees, and customers in much more efficient way.

Previous Post: Marketers: What You May Have Missed From Dreamforce ’22
Next Post: Top 10 Dreamforce ’22 Announcements for Developers