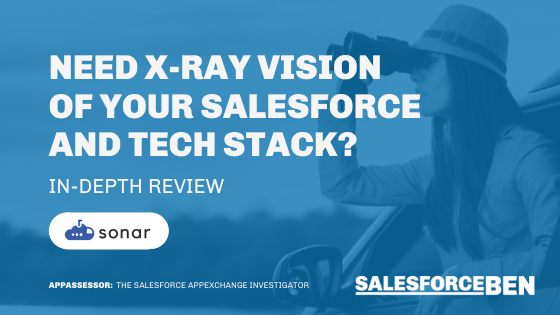 Will is a self-taught Flow enthusiast based near Liverpool. Passionate about bringing good UI/UX through mixing Configuration and Code. Has been having fun with Salesforce since 2015.

At some point in your Salesforce career, whether as an accidental admin or as a seasoned consultant, you will find yourself in a well-used org with a lot of history, where one change could make the difference between a smooth workflow and total disaster.

Enter Sonar – an app that makes your org transparent, helping you work out what went wrong, should the worst happen. That means there’s minimal downtime for those all-important business processes. Having acquired a few grey hairs over the years untangling org spaghetti, I can only wish I’d heard of Sonar sooner.

In addition to tracking the past, Sonar also covers the future – giving you an understanding of the impact an upcoming deployment or project might have – and leaving behind documentation on what was changed once the project is complete.

The app is accessible for any user, even those with the most basic knowledge of the Salesforce platform. Anyone can jump in and start planning, and include relevant stakeholders throughout.

This in-depth review will dive into Sonar’s features, ideal use cases, setup effort, and how this app could be a great addition to your tech stack.

While there are other ways of handling granular change tracking (setting up a Git, ensuring all changes go through a pipeline), these practices are time-consuming, which makes it unrealistic for most admins and consultants to build them correctly, following best practices (plus, inaccurate change tracking/documentation).

Sonar is aiming to provide similar results without the need to learn a new platform and its user interface is friendly enough to be introduced to nontechnical users and other project stakeholders.

Sonar tracks the metadata in your org/s, all the way down to the smallest items (like a picklist value). Knowing where each item is used helps untangle even the most knotted orgs and plan changes without fear of what might happen if you ‘just delete that opportunity stage value for the sales team’.

Sonar syncs the metadata in your org once a day, identifying new changes (which can be manually run if required), and presents a history of all metadata changes made by users and at the system level.

It seeks out rules that reference picklist values that no longer exist, and other common breaks that Formula Validation simply won’t catch. The Sonar UI alerts you to an issue, making the issue obvious (in a friendly way) pointing out what you need to know, at a glance.

This results in either an issue with a business process (as the validation rule was there to maintain data integrity), or there are junk validation rules in my org that need to be cleaned up. Regardless – the cause is clear (highlighted in red) plus a link to the offending rule (Salesforce Cloud logo, found on most items in Sonar).

Due to this change, Salesforce users could be blocked from saving records and the admin would need to act quickly. Making this dashboard part of your daily routine, it can provide peace of mind and avoid panic searching for a broken rule, misfiring flow or untriggarable workflow rule – or any other reason a deployment goes south.

Sonar not only aims to tackle tracking the metadata in your org, but also ongoing projects.

Initiatives bring teams together, a commonplace to plan, enact and troubleshoot Salesforce projects, as well as look back at the org’s history.

From an admin’s perspective, I can see everything I need at a glance. I can:

Quickly get to grips with the scope of both future and past initiatives, and the impact that changes may have. Any item that is referenced elsewhere (by other metadata items) has a handy icon, showing a count of how many times it is used. If this is clicked, a tile appears detailing:

Again, it’s worth noting that it’s quick to click through from an item in Sonar into Salesforce – I was consistently able to get from an initiative I was working with to the Salesforce setup for a specific field in only two clicks:

From a consultant/product owners’ perspective, I can see an overview of what is/was being worked towards. I can understand:

For me, as a consultant, being able to understand the thought process of previous implementations and changes is critical to ensuring that breakages don’t happen, and work is not duplicated. Setting up an initiative for major changes provides exactly that, keeping a log of both the business reasons for a change as well as what was contained within.

It’s quick and easy to add metadata to an initiative – something else that’s important to me. As I’ve found over the years with many other tools – it’s all very well-intending to document an org ‘quickly and easily’, but if there are restrictions placed against the project, then documentation is often left by the wayside. There is nothing more dangerous and misleading than half completed documentation.

Thankfully, a handy ‘add to initiative’ button makes it speedy to add/remove any item that is searched in Sonar, to help you keep the initiative up to date.

Chrome plugin: Sonar is committed to making this quick and easy, they have even provided a Chrome plugin to link right back to that item directly from Salesforce.

In the same way that initiatives can be created to group project changes, you can also tag items.

Tags can be anything and are completely customizable.

For example, I found it useful to tag items based on department ownership of the metadata and the processes it was involved with. When I came to make a change to that field, I knew what dataflow I would be impacting, and who I had to talk to if there would be any anticipated impact.

Sonar Search is a powerful tool – Sonar’s ‘bread and butter’.

Always present on the left-hand side of the screen, it combines catalogued metadata with the tagging and initiatives features. Sonar can search through everything – from field metadata to Flow nodes to find what you need.

Search at either a granular, or a high level. For example, searching ‘case’ will allow me to click through to the Case object or click right into the field I was looking for.

When clicking into an object, I found it particularly useful to filter by tags, allowing me to view only the fields that were tied to the business process I was looking for. The example above shows how I found all fields on the Case object that I had tagged with ‘Feature Request’. I could get a high-level look at the impact changing this process would have (how many references these items had). Luckily, in this case only 1 dependency was found!

Sonar provides high-level metrics for those who want to understand how an org is evolving on a daily, monthly and ongoing basis.
The home dashboard provides a few figures at a glance:

This is a great way of keeping an eye on when the changes are being made – especially if none of them is planned. It’s also a real boost to see some high numbers in there after a big deployment – there’s nothing quite like seeing an org grow in real-time.

Clicking ‘detailed changes’ shows view of all the changes that were made, who made them and when – as well as a more detailed breakdown of the additions and deletions that have occurred.

Most excitingly, you can filter using the ‘to’ and ‘from’ dates to make finding what changed around a specific time easier (great for troubleshooting) and to see the metrics for that period.

Sonar aims to be accessible to a broad audience, allowing anyone to jump in to understand how changes to Salesforce might affect them and their day-to-day working.

There are a few personas who will see the most value, that I want to highlight.

The Salesforce admin has everything they need to move quickly – either progressing changes or jumping on issues – thanks to the ability to track references, changes and stakeholders.

Irrespective of Salesforce ability, Sonar will help both junior admins get up to speed when working with a new org, or senior admins to understand the impact of an upcoming large deployment.

A consultant needs to get onboard quickly with every new client’s org they work with, and understand the changes that could go back years

Thankfully Sonar is on hand to make sure they don’t trip up and break a rule revolving around a business process that they didn’t even know existed.

Using Sonar has the added benefit of helping with that task many (all) consultants hate: documentation. If an initiative is set up and followed through in sonar, a consultant effortlessly leaves behind an audit trail of what was done, why it was done and what it affects.

A project team member may not have technical skills, or even may not know what an object is.

Sonar provides this user with access to all the things they need – the status of initiatives, a place to make comments and links out to any documentation for their reference.

Perfect for making sure that these team members stay involved and engaged, without having to learn tools that might fall outside their comfort zone.

Sonar’s dashboard provides a great go-to at the start of every day. A list of outstanding issues, ongoing initiatives and high-level metrics provides a Product Owner with everything they need to dive into the detail quickly, without getting distracted.

Sonar takes minutes to set up. Making an account was easy, and connecting an org is as simple as clicking ‘Link a new Salesforce Organisation’. After signing in with your account details, wait a minute or so for the sync to complete.

It’s worth setting up a handful of tags that might be immediately useful to you (department names, business processes, etc.) to start seeing value even faster.

Sonar offers a free trial to get a taste of their app and how it can benefit you. They also offer three tiers of pricing, with varying access to features, and a separate model for consultants.

At some point in your Salesforce career, you will find yourself in a well-used org with a lot of history, where one change could make the difference between a smooth workflow and total disaster.

Sonar solves age-old challenges incredibly well. The app is accessible for any user, even those with the most basic knowledge of the Salesforce platform. Anyone can jump in and start planning, and include relevant stakeholders throughout.

While Sonar might not have all the bells and whistles that a Git might have, it knows its audience well and provides an easy-to-understand UI that gets you where you need to be, quickly – and that speaks volumes.

Boasting a 4.7/5 rating on G2, it’s clear that teams and individuals are sleeping better at night knowing that Sonar has their backs. You can contact them today to access the platform free for two weeks and see it for yourself.